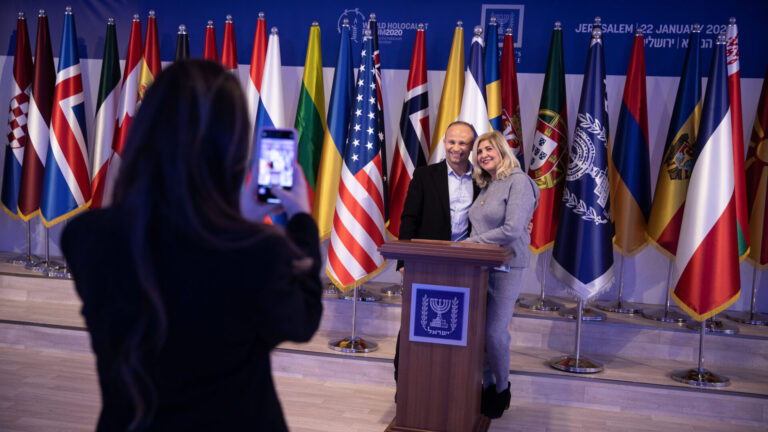 Workers at the President's Residence in Jerusalem take a moment for a quick snap before world leaders arrive in Israel for the World Holocaust Forum. Photo by Hadas Parush/Flash90

For the first time in history, about 50 global and Israeli leaders gathered for an official dinner hosted January 22 by Israeli President Reuven Rivlin at Beit HaNasi (President’s House).

The event was held on the evening before the fifth annual World Holocaust Forum at Jerusalem’ Yad Vashem Holocaust Remembrance Center.

The dinner was highlighted by remarks from Rivlin, King Felipe VI of Spain and Israel Prize laureate Prof. Yehuda Bauer, a Holocaust scholar at the Hebrew University and Yad Vashem. 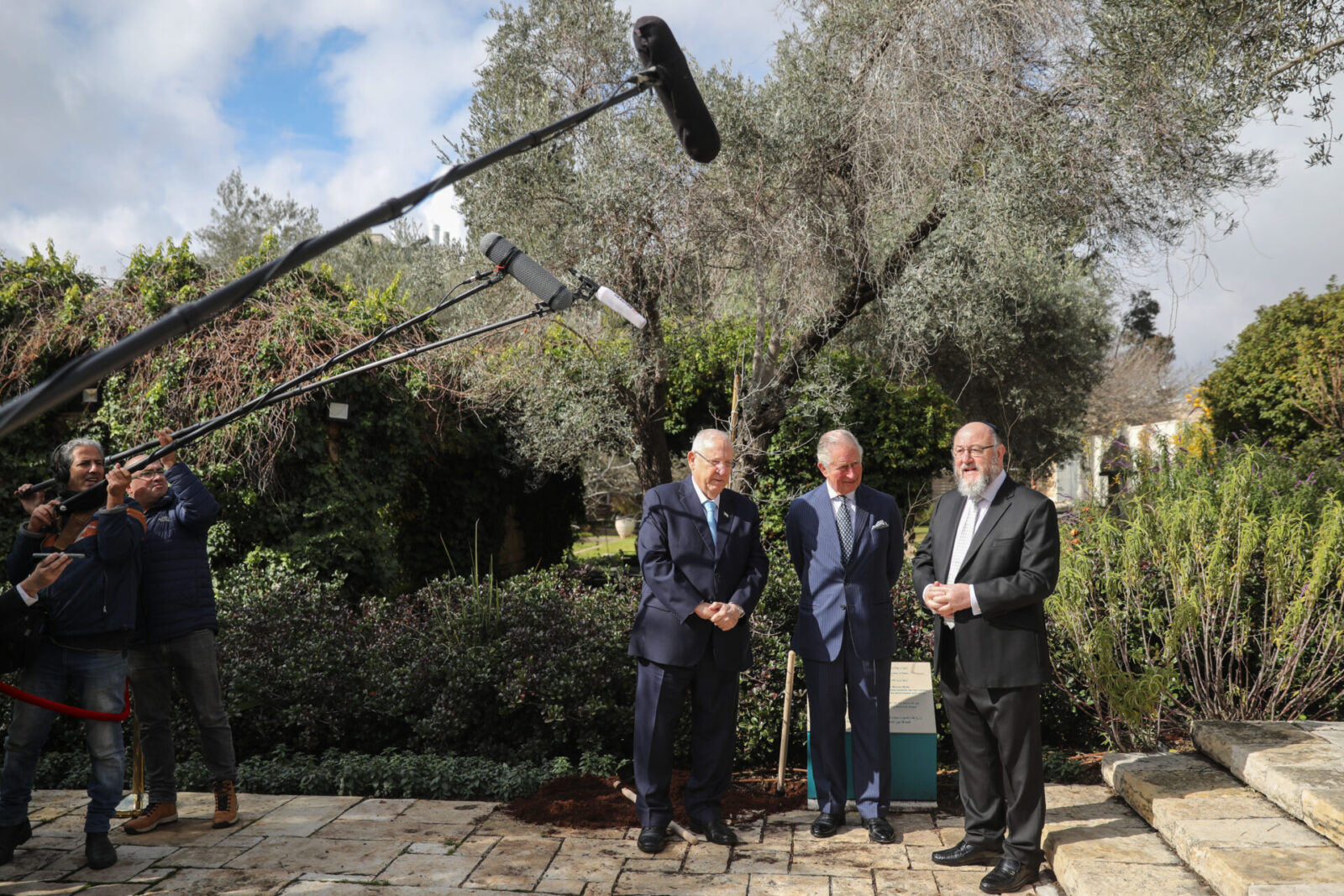 Prince Charles, Israeli President Reuven Rivlin (left) and UK Chief Rabbi Ephraim Mirvis are watched by the world’s media at a tree planting ceremony at the President’s residence in Jerusalem on January 23, 2020. Photo by Hadas Parush/Flash90

“This is a historic gathering, not only for Israel and the Jewish people, but for all humanity,” Rivlin said. “This evening as we remember the victims of the Holocaust, and World War Two, we also mark the victory of freedom and human dignity.”

The following morning, Rivlin and Prince Charles planted an English Oak tree in the garden of Beit HaNasi in tribute to the tree planted in the Avenue of the Righteous Among the Nations at Yad Vashem by President Ezer Weizman and The Duke of Edinburgh in honor of Charles’s grandmother, Princess Alice, who harbored a Jewish family during the Holocaust. 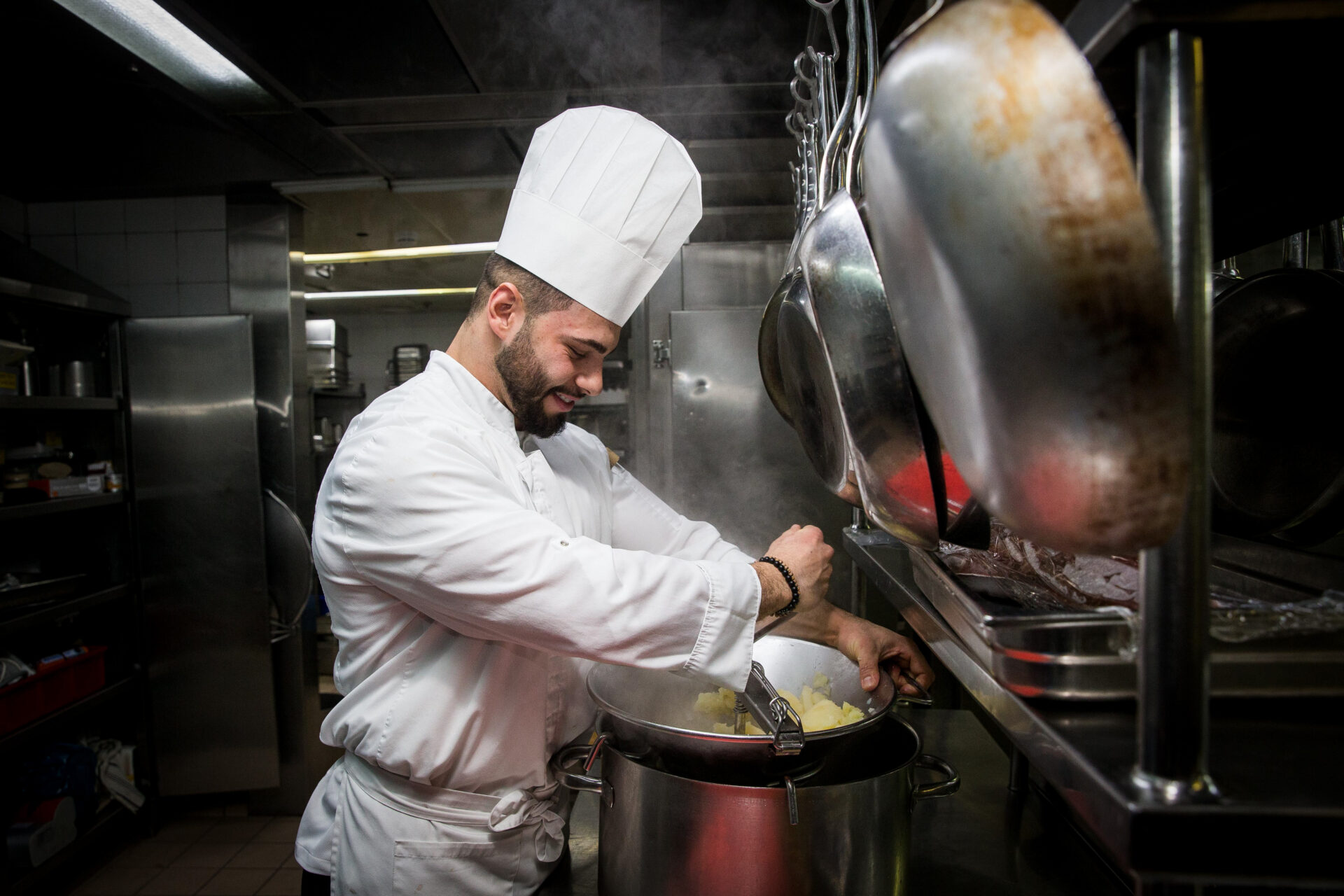 Preparations at the King David Hotel ahead of the visit. Photo by Yonatan Sindel/Flash90

This year’s World Holocaust Forum marks the 75th anniversary of the liberation of Auschwitz-Birkenau.

In honor of the occasion, a special film for dinner guests included remarks by 44 world leaders calling for Holocaust remembrance and fighting antisemitism. Those comments appear in a unique book published by Yad Vashem and the World Holocaust Forum. 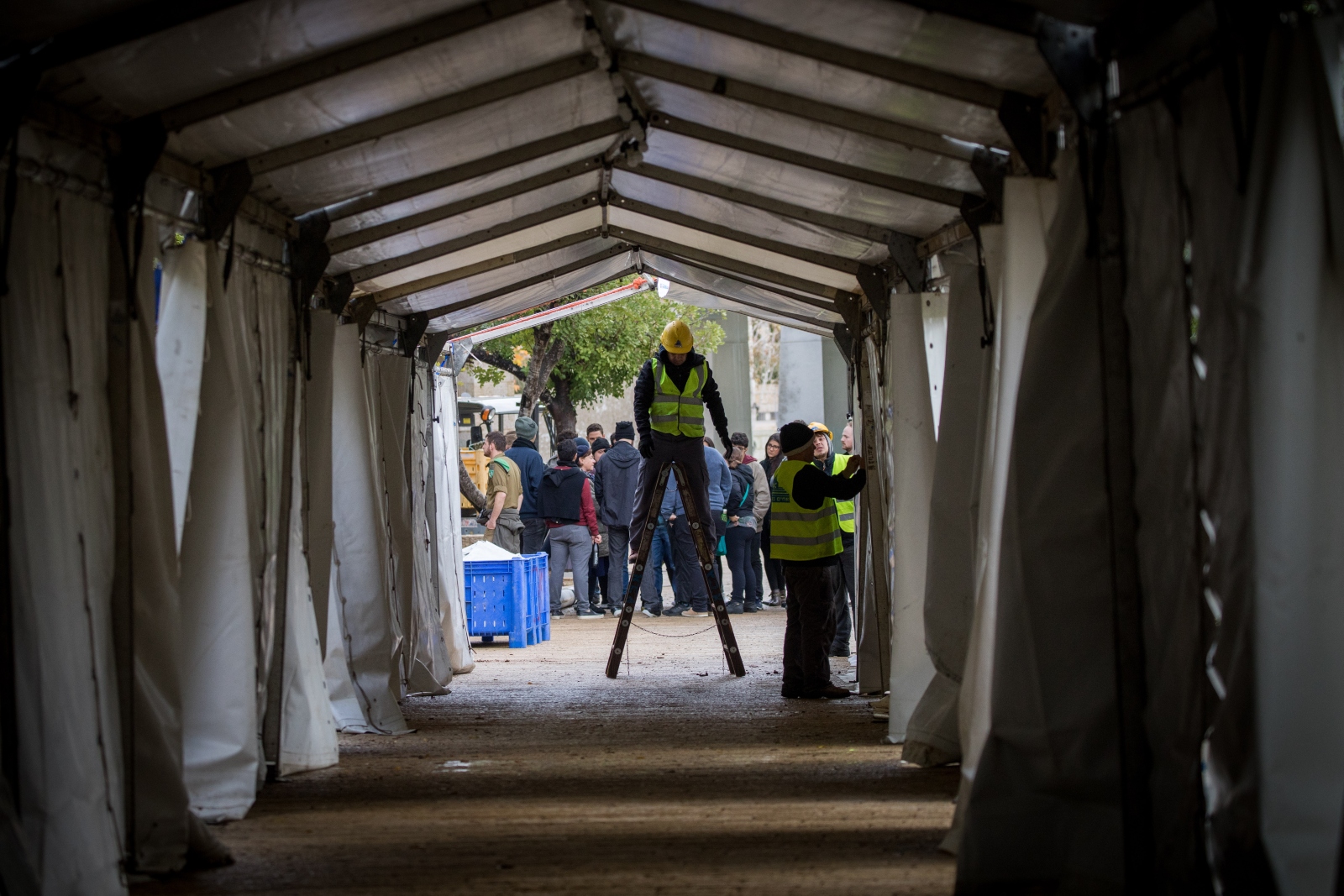 After the first course was served by 200 waiters, Israeli singers David D’Or, Miri Mesika and Amir Benayoun performed “The Last Survivor,” written in 2018 for the Knesset delegation to the March of the Living by Amir Benayoun with words by Moshe Klughaft.

The opening to the song was played on a violin owned by Holocaust survivor Itzhak Reider, a talented musician living Warsaw when war broke out. 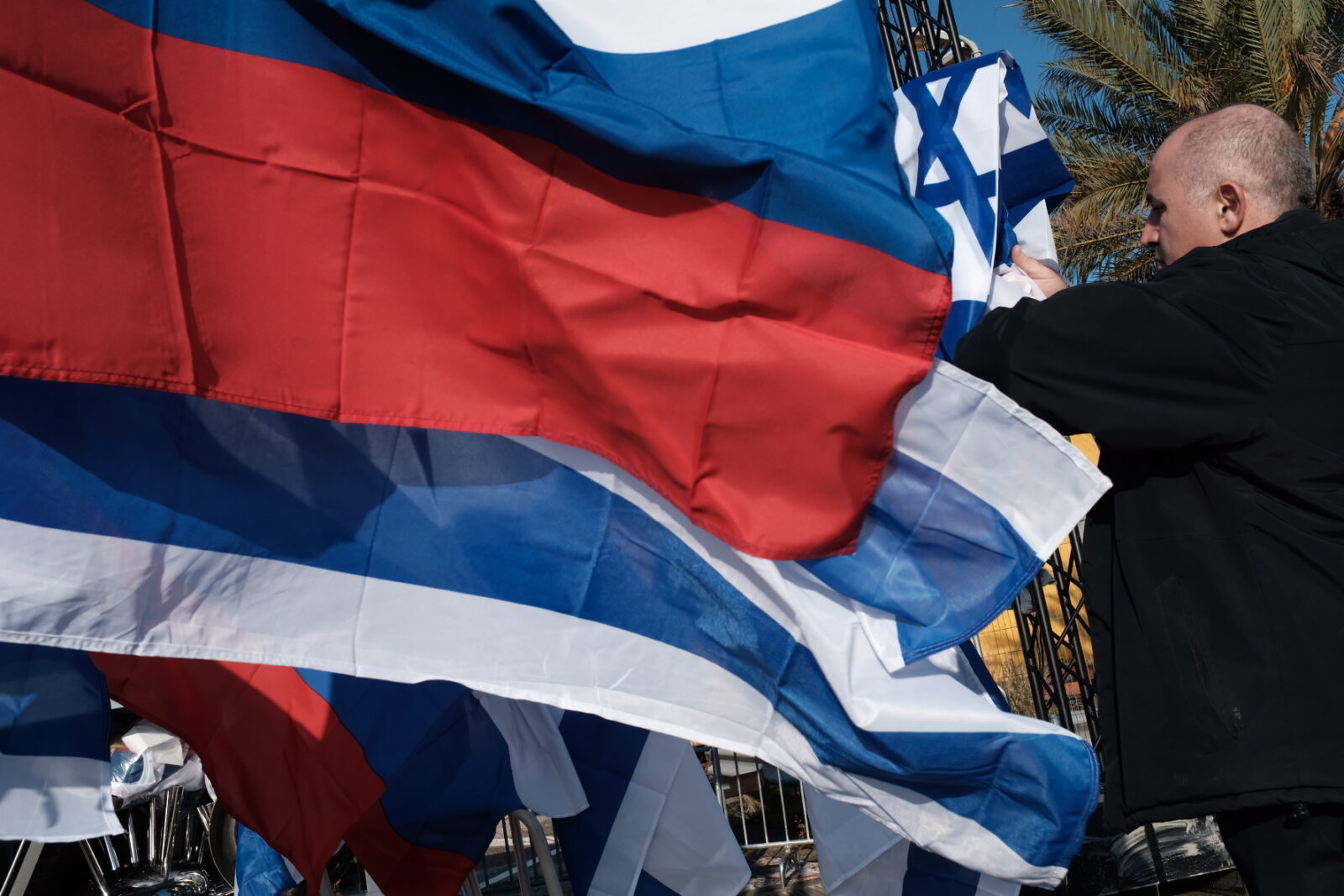 Having some trouble with the flags ahead of the arrival of Russian president Vladimir Putin at Ben Gurion Airport on January 23, 2020. Photo by Tomer Neuberg/FLASH90

A German friend smuggled Reider into Belarus with a fake passport, but he was caught on the way by the SS. They forced him to play for them and thus decided to let him live. Eventually he made his way to Moscow, but his violin was left behind and his entire family was murdered by the Nazis in the Warsaw Ghetto and in Auschwitz.

Reider managed to rebuild his life through music and became a noted professor, had a family and immigrated to Israel. In 1973, a stranger knocked on his door and returned his lost violin to his son Vladimir. 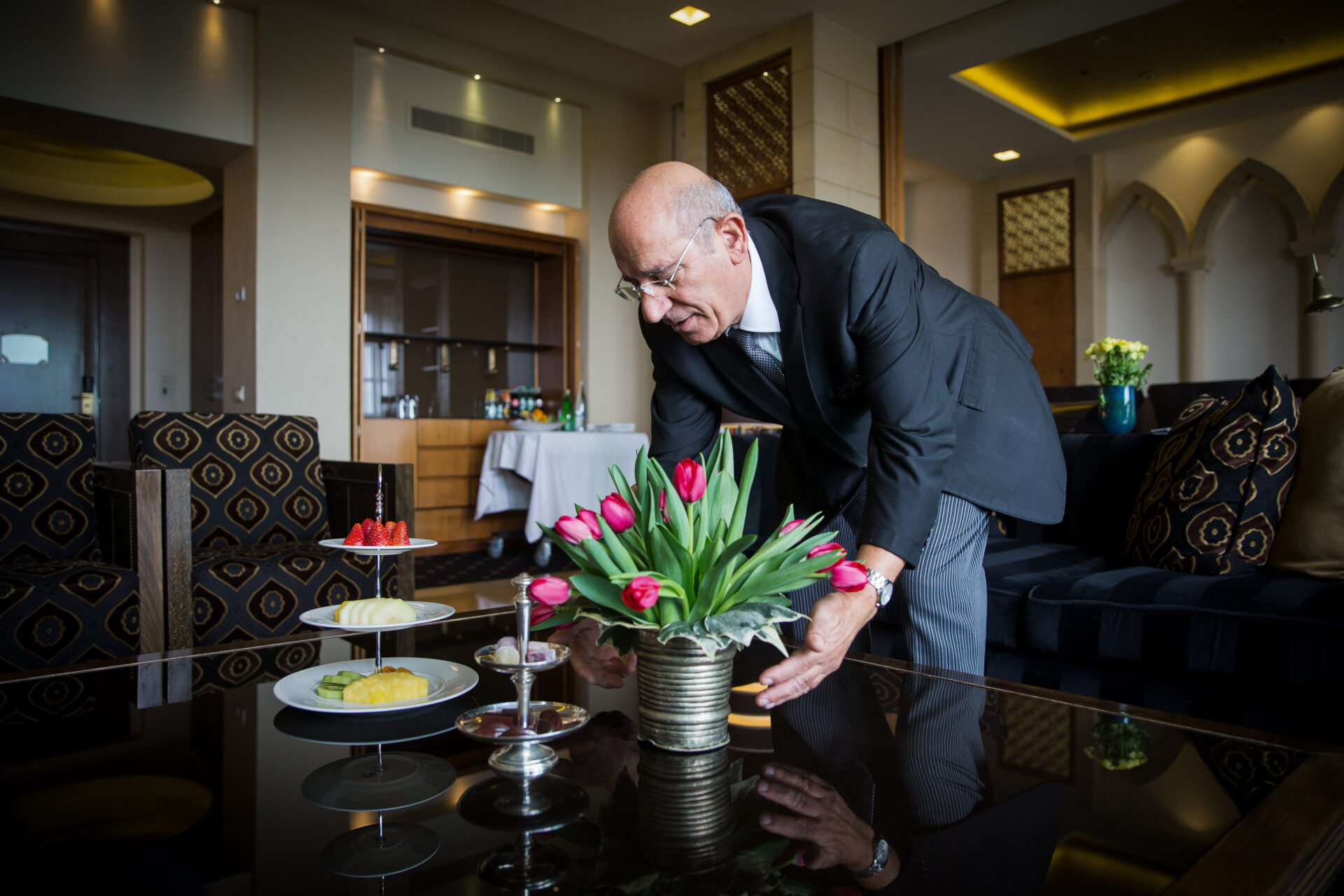 Making sure things look just right at the Kind David Hotel ahead of the visit by world leaders as part of the Fifth World Holocaust Forum. Photo by Yonatan Sindel/Flash90

In another touching moment, Israeli artist Shlomi Shaban performed a special arrangement of Leonard Cohen’s “Dance Me to the End of Love.”
Cohen wrote the song based on testimonies of survivors of death camps who spoke about string ensembles forced to play music as prisoners were marched to their death in the gas chambers. Shaban is the grandson of a Holocaust survivor who survived Dr. Josef Mengele’s cruel medical experiments and helped other prisoners survive.

“The future lies in the choices we make, especially, those we make together, as countries and nations,” Rivlin said. 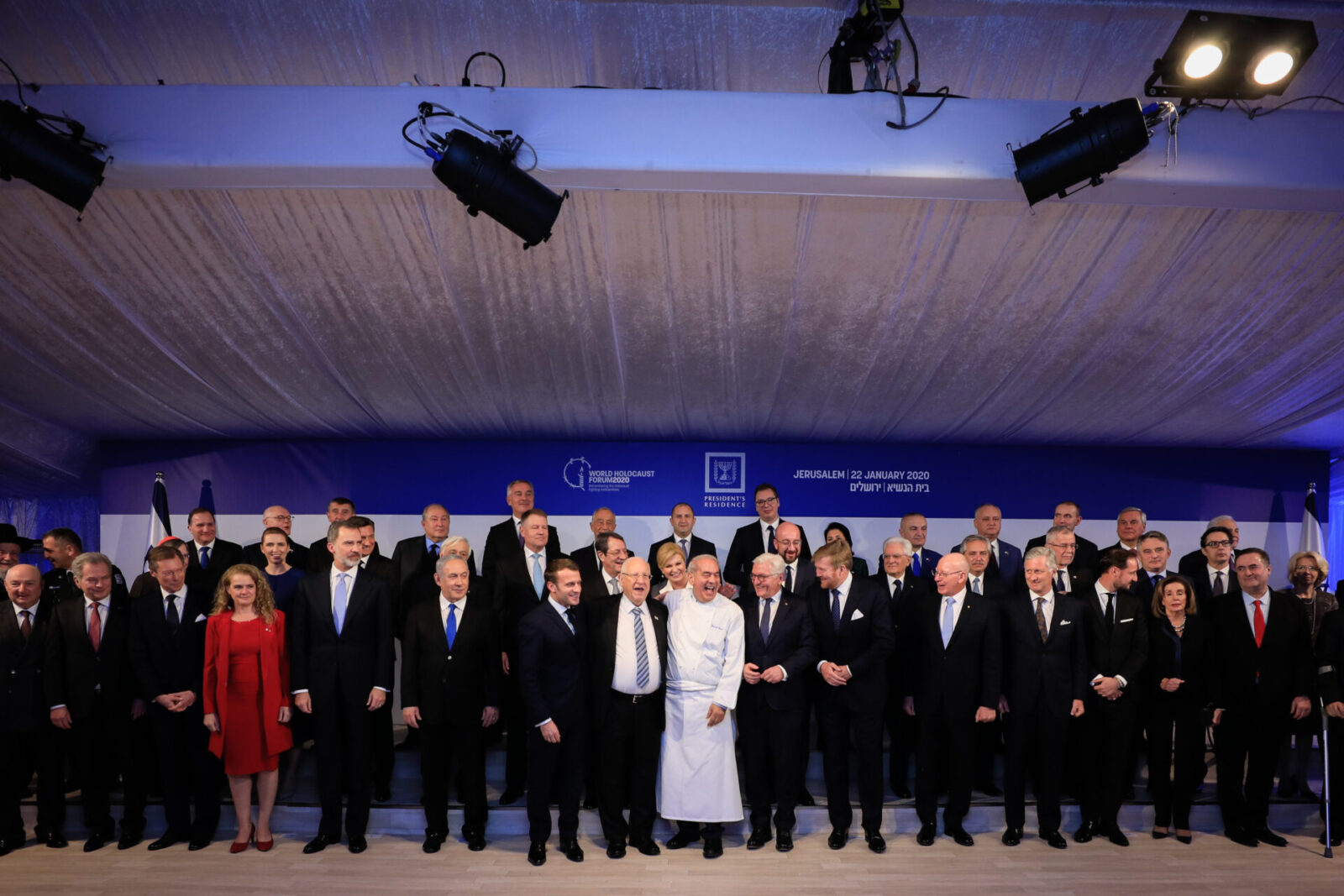 President Reuven Rivlin hosts over 40 world leaders as part of the World Holocaust Forum, on January 22, 2020. Photo by Olivier Fitoussi/Flash90

“I hope and pray that from this room, the message will go out to every country on earth, that the leaders of the world will stand united in the fight against racism, antisemitism and extremism, in defending democracy and democratic values. This is the call of our time. This is our challenge. This is our choice,” Rivlin said.