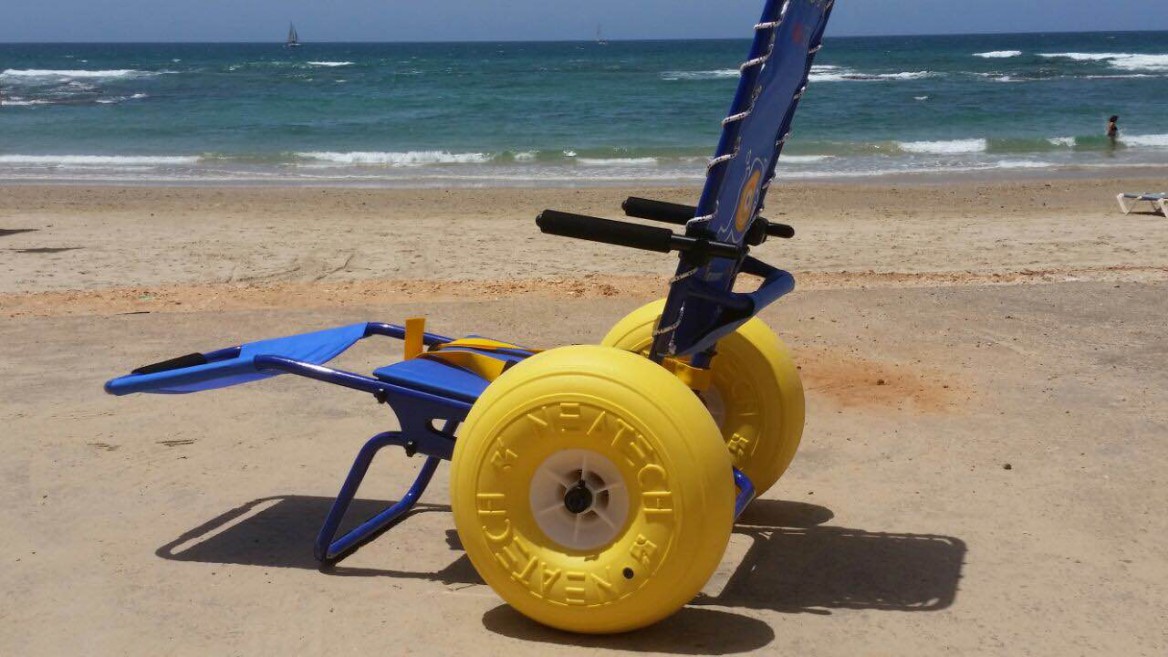 The 2016 swim season at Israel’s beaches officially opened May 9, and cities and towns lining the Mediterranean Sea, Sea of Galilee (Lake Kinneret), Dead Sea and Red Sea put out a call for everyone to come and enjoy the surf, sand and sun.

There are 96 recognized beaches on the Mediterranean Sea coast, 27 sandy strips around the Kinneret, 16 beaches at the Dead Sea and four beaches at the Red Sea.

But Banana Beach in Mikhmoret, a community just north of Netanya on the Mediterranean Sea, took the concept that the beach is for everyone one step further and added two beach wheelchairs to its coastal furniture collection.

“The decision to add these chairs to our beach is to truly make the beach accessible to everyone who wants to enjoy it,” Yossi Doktori, manager of Banana Beach in Mikhmoret, tells ISRAEL21c.

According to Access Israel, more than 20 beaches across Israel are considered accessible to people with disabilities. However, being accessible and actually offering equipment to aid accessibility are not one and the same.

Doktori posted a photo of the beach wheelchairs on the Banana Beach Facebook  page and it quickly racked up shares and likes. The Italian-made chairs sport big yellow wheels that can easily navigate the sand without getting stuck.

Doktori says the chairs are for the elderly or disabled or whoever needs help moving over the sand.

“It is the most fulfilling and exciting feeling to see people use these special chairs and go into the water with ease,” says Doktori. “You can see their happiness.”

In addition to being accessible, 21 beaches and three marinas also boast the Blue Flag  international symbol, earned by upholding environmental and accessibility standards.