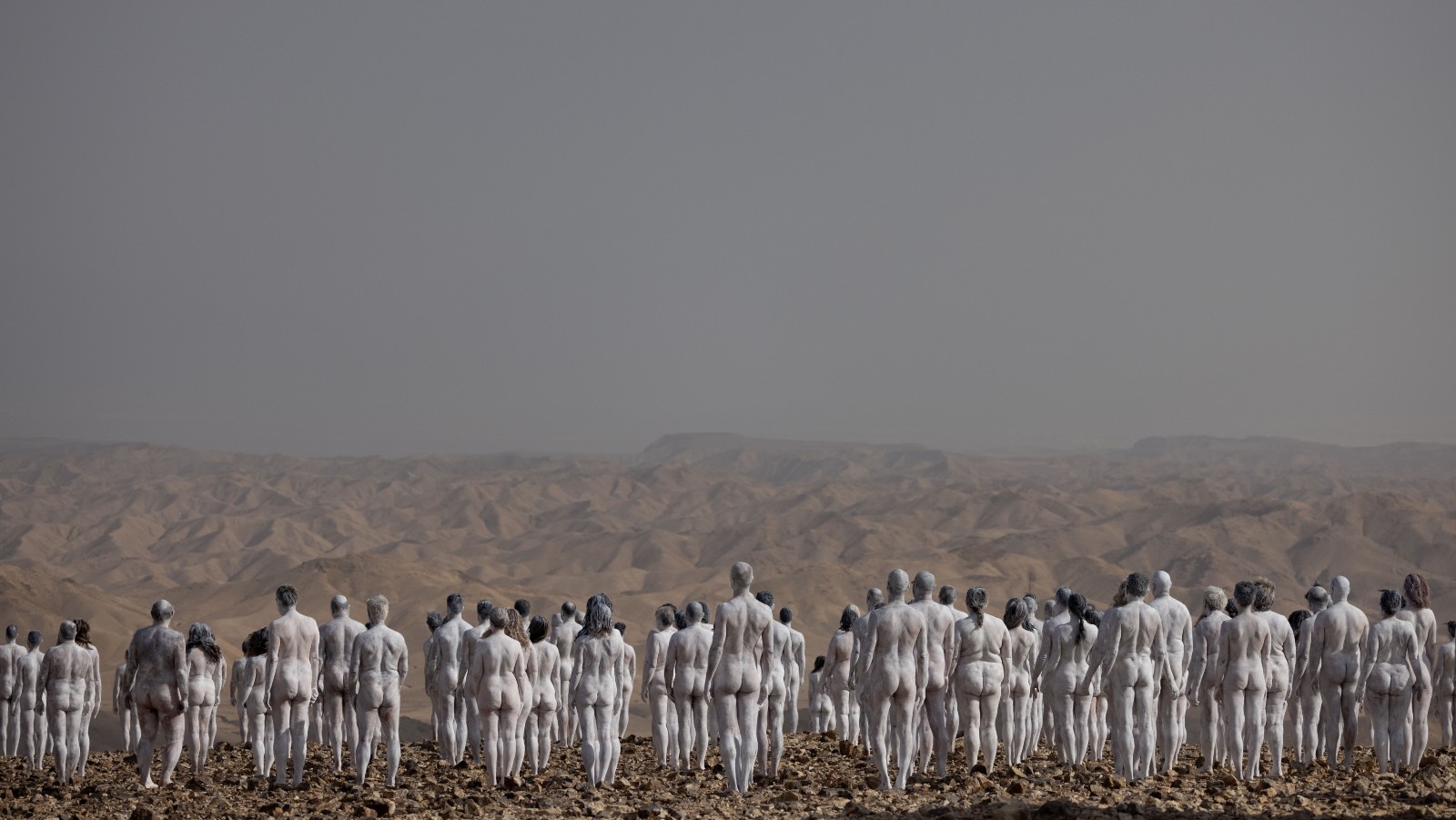 People painted in white pose for a group picture by art photographer Spencer Tunick and his team, outside Arad, October 17, 2021. Photo by Yonatan Sindel/Flash90
#NakedSea

Baring it all for the sake of the Dead Sea

Photographer Spencer Tunick does nude photo shoot with 200 volunteers to raise awareness for the threatened sea and a museum celebrating its beauty.

Last Sunday, 200 men and women of all shapes and sizes shed their clothing in the desert for an epic photo shoot.

The project is designed to bring attention to the deterioration of Israel’s Dead Sea and the opening of the Dead Sea Museum in nearby Arad.

This was the third such photo session by American art photographer Spencer Tunick. A decade ago, he gathered some 1,100 people for an in-the-buff shoot at a Dead Sea beach that no longer exists.

The salty lake in the Judean desert does not receive enough freshwater to replenish itself and is heavily mined for minerals. Therefore, the water level drops about a meter (equivalent to a yard) per year and the ground caves in.

“The original installation site has all but disappeared and is no longer accessible due to dangerous sinkholes,” Tunick said. 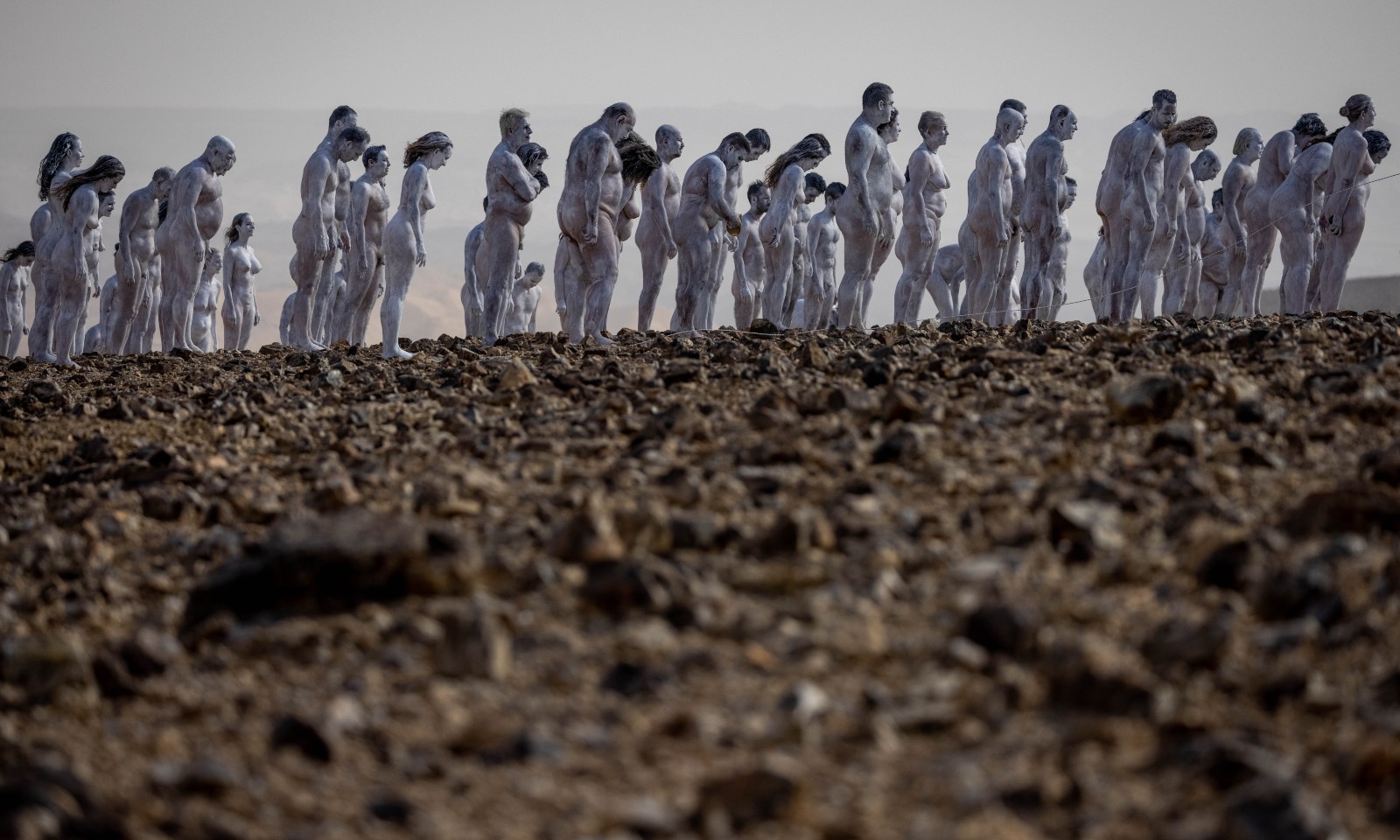 In 2016, he returned for a smaller and more covert shoot at another point along the shore. That site, too, has fallen victim to sinkholes caused by thedissolution of underground layers of salt.

“I am hoping that my new work and the inauguration of the Dead Sea Museum that will be in Arad will inspire methods and technologies, environmentalism and conservancy, aimed at rebuilding and recondition the Dead Sea,” Tunicksaid. 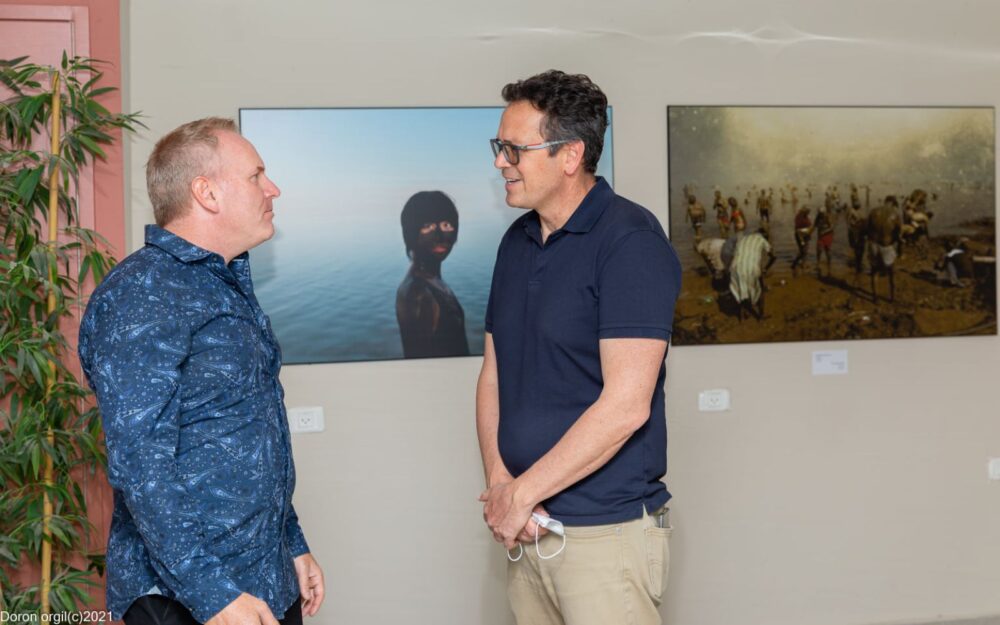 Tunick said his works at the Dead Sea “attempt to poetically visually create pushback against the loss of a natural wonder of the world” and that the volunteers who stood barefoot on the rocky soil for the project help publicize the environmental challenges that must be overcome. 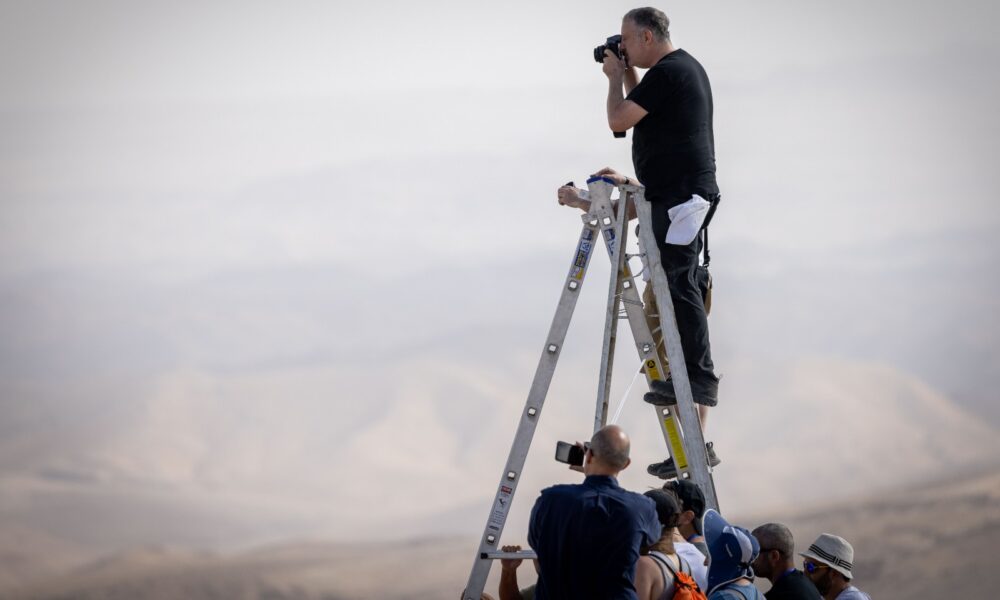 “For me, the body represents beauty and life and love,” Tunick told reporters against the backdrop of misty mountains facing Arad.

“When I think of the nude body I don’t think of violence and crime. I think of art and progress, togetherness and equality.”

The photo project was conceived by Ari Leon Fruchter, a social entrepreneur and cofounder of the Dead Sea Revival Project and the initiator of the virtual and actual Dead Sea Museum to be designed by Neuman Hayner Architects. Also involved is art consultant and curator Keren Bar Gil, Tunick’s exclusive representative in Israel.

Tunick’s entire collection of Dead Sea photos are on view in the virtual Dead Sea Museum until April 21, 2022.