US President Barack Obama as a modern-day hipster. (Courtesy of Amit Shimoni)

Amit Shimoni has done the impossible. This Israeli designer-illustrator is making people around the globe smile and laugh when they see politicians.

From Hillary Clinton to Theodor Herzl, Barack Obama to George Washington, David Ben-Gurion to Margaret Thatcher, Shimoni has turned these decision-makers into the hippest personalities today.

Shimoni, 28, is the artist behind HIPSTORY and SHEPSTORY, two illustrated series that depict world leaders (living and deceased) as hipsters and fashion-conscience icons. Shimoni most recently added three new American faces to his portrait series of the world’s greatest leaders as modern day hipsters, specially for the 4th of July:  George Washington, Ronald Reagan and President Barack Obama. 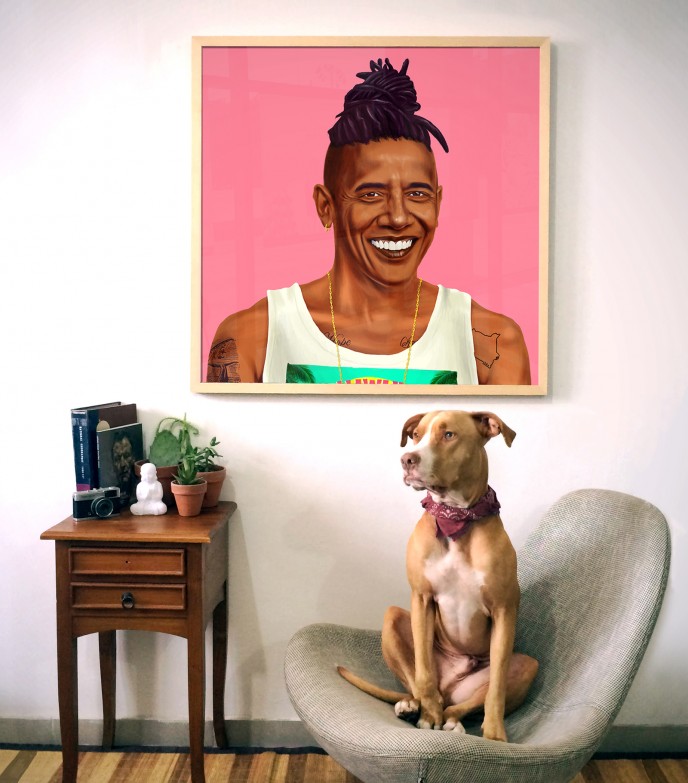 US President Barack Obama as a modern-day hipster. (Courtesy of Amit Shimoni)

“Part of the purpose in drawing them like this was to make people look at these leaders and smile,” Shimoni tells ISRAEL21c from his Jaffa studio. “I want people to reflect on our leaders, our society and ourselves.”

His drawings grace the walls of local bars and homes, and appear on coasters, pillowcases, coffee mugs, smartphone skins and even car skins. 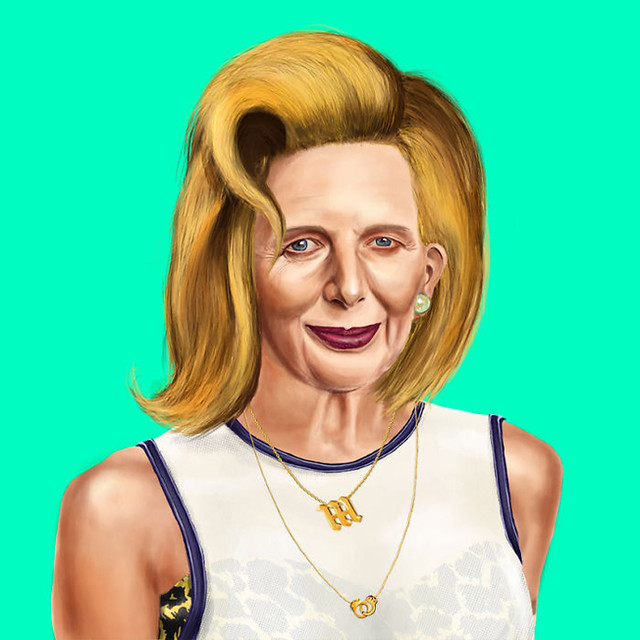 “From go, I decided to make my art available to the public; whoever wants a bit of the project can share in it,” he says. “I love when people upload pictures to social media of something they bought with one of my images. It’s very heartening to see it.”

Though he graduated from Bezalel Academy of Arts and Design in Jerusalem only in 2014, Shimoni’s audacious depictions have already been featured in the New York Times, The Daily Mail and other major newspapers. They’ve also been exhibited in galleries in New York, Berlin, San Francisco, Tel Aviv and Jerusalem.

The fun drawings of Vladimir Lenin in a black studded jacket, Nelson Mandela sporting a flattop hairstyle and a tropical-print bomber jacket, Margaret Thatcher in a leopard-print strapless bra peeping through a white tank top, and Mahatma Gandhi wearing a tie-dye shirt and Sixties-style shades all came about thanks to a guy who could have been Herzl’s doppelganger.

Shimoni tells ISRAEL21c that he had just uploaded a drawing of David Ben-Gurion to his Facebook page — to see what his friends thought of his idea to base his graduate project on the first Israeli prime minister in modern-day style — when someone who resembled the visionary behind modern Zionism appeared on his Facebook feed.

“I saw someone who looked just like Herzl; it was unbelievable,” he says. “And then I started thinking about a modern Herzl hipster. And from there I moved to Moshe Dayan and Golda Meir. The project eventually turned into 12 Israeli faces.”

Meant to be a final art-school project, this was actually the beginning of Shimoni’s career. 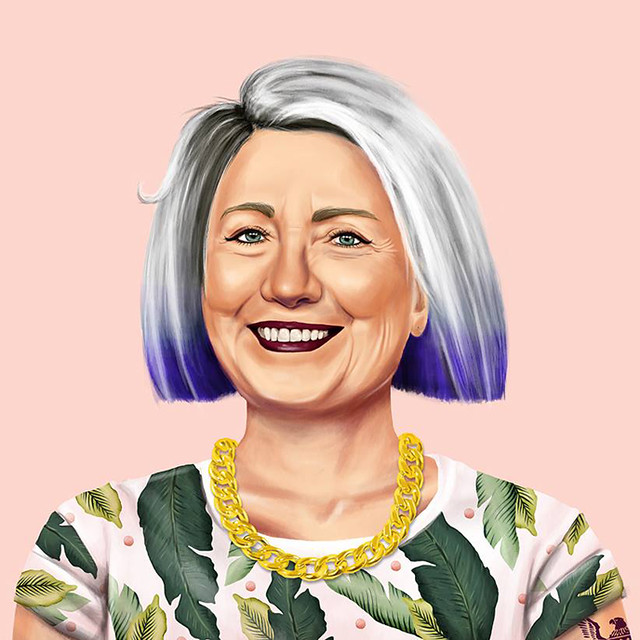 Everyone who saw the illustrations of Ben-Gurion in a pink button-down pineapple shirt, Herzl sporting an earring and a wave in his hair, Rabbi Ovadia Yosef in a colorful bohemian shirt, and Shimon Peres in a yellow hoodie, wanted more.

So, Shimoni decided to dress up other world leaders in an “attempt to create new and altered portraits of iconic figures of the 20th century, by placing them in different time and culture.”

His BoredPanda page has more than 76,500 views.

“It’s very exciting. When I started work on the project, I hoped it would get some exposure and people would like it,” he says, noting that if the muse is with him, he can be found drawing directly onto the computer from 10am to 2am some days.

For International Women’s Day in March 2015, he released a new version of the series — called SHEPSTORY, a play on the words “she” and “hipstory” – featuring female leaders who impacted world history. US presidential hopeful Hillary Clinton, German Chancellor Angela Merkel, Thatcher, Meir and Queen Elizabeth II got his hipster treatment. 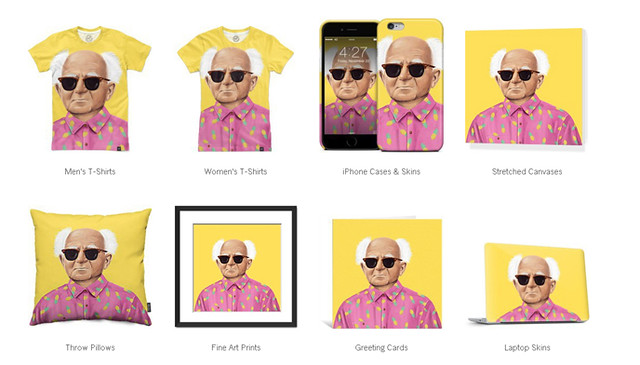 You can get a David Ben-Gurion throw pillow or other novelties.

When The New York Times featured his work, “and then a wave of other publications,” he knew he was onto something.

And he’s not worried about being boxed in or only identified with HIPSTORY.

“I believe it’s good for me. There’s always new art and it changes all the time. I’m sure I’ll do other projects in the future, not necessarily similar,” he says. “If they’re popular like HIPSTORY, all the better.”

Although starting in a small country with a limited audience can be difficult for new artists, Shimoni says Israel was exactly the place for him to launch.

“I think it was very right to start with the Israeli series. The interaction in Israel is very personal. People want to be friends here, so people told me what they think and I got important feedback,” he says about his early drawings. “It’s a great place to start as an artist because people in Israel like to compliment you.”

Shimoni grew up in Kfar Sirkin, a moshav in central Israel near Petah Tikva, completed his college studies in Jerusalem, and now lives in Jaffa with his girlfriend.

He says he draws inspiration from everything, “from a billboard to a woman who drops something, from Facebook to whatever.”

Asked which of his drawings he likes best, Shimoni takes a while before answering. 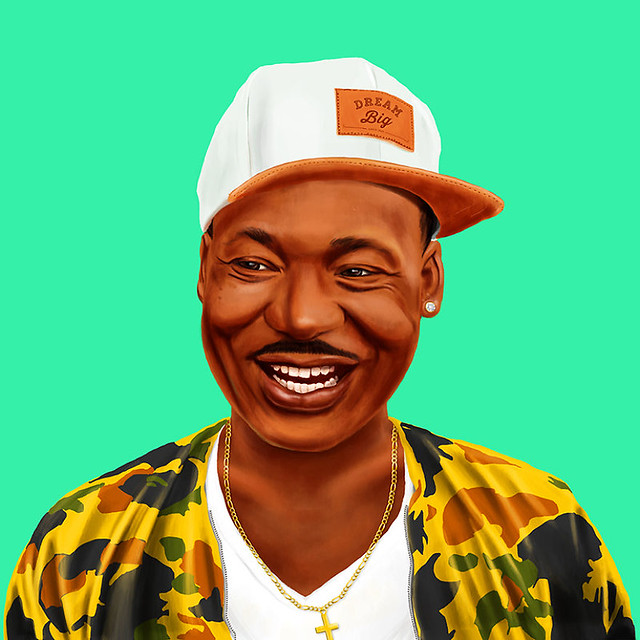 “They are like my children; it’s hard to choose which I like best,” he says. “I like Ben-Gurion in the Israeli series. The pineapple shirt and yellow background gives off a happy vibe. It’s also because of who he was — an iconic personality. I’m glad I was able to add something to his character and that everyone is happy to see him and put his picture on their wall.”

When he’s not adding portraits to his HIPSTORY or SHEPSTORY series, you can find him working on an animal-rights project in California, organizing exhibitions and taking freelance assignments.

“I hope I’ll finish new projects in the coming years and get to an international audience,” says Shimoni. “I want a lot of things.” 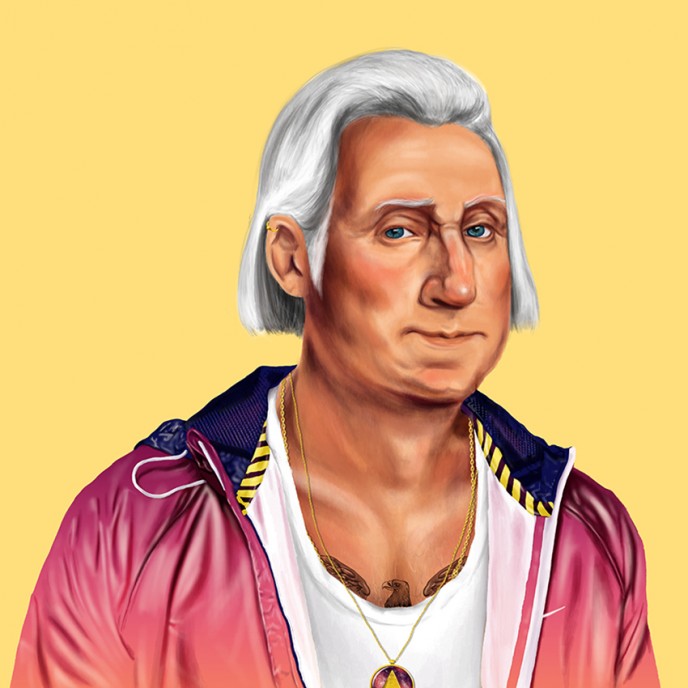 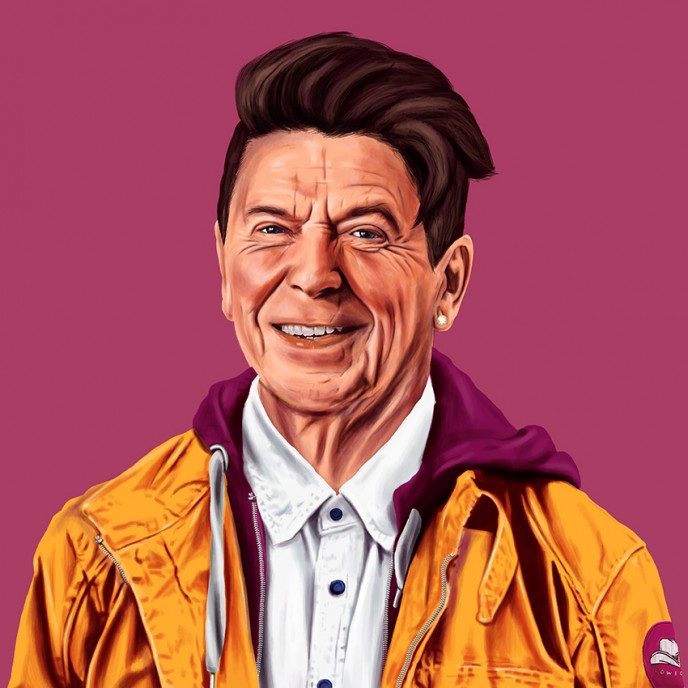