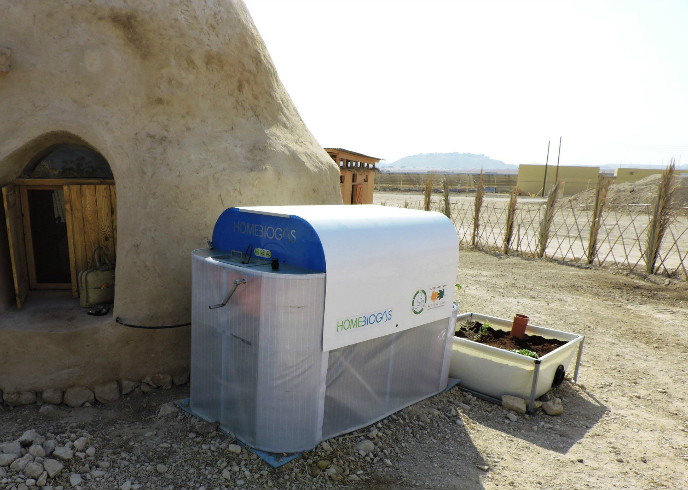 This TevaGas unit is installed in an educational model off-grid village owned and managed by the Eilat-Eilot Renewable Energy Initiative.

When UN Secretary General Ban Ki-moon visited the sukkah of Israeli President Reuven Rivlin during the Jewish harvest holiday last October, he was treated to a demo of a machine the government has given to Bedouin families to convert organic waste into clean biogas for cooking, heating and lighting, as well as organic liquid crop fertilizer.

“He got very excited and told us, ‘Millions of women and children die each year due to indoor smoke from open fires. This is just the thing they need. The UN should be purchasing these units!’ recalls Ami Amir of HomeBioGas, which develops and manufactures a new class of anaerobic biodigesters to convert organic waste to clean renewable energy.

“He asked us to be in touch with the UN’s Food and Agriculture Organization to see where and when our systems could be deployed,” the marketing director tells ISRAEL21c.

The family-size TevaGas (TG) backyard units, available as an easy-to-assemble kit, generate safe energy and fertilizer through bacterial anaerobic digestion of organic waste such as food scraps and animal manure. They provide a sustainable solution for off-grid urban and rural families, as well as environmentally conscious homeowners and small farm owners, in warmer climates.

Based on the success of a small pilot program, the ministry has ordered another 25 units – at NIS 8,000 apiece — for Umm Batin and another Negev Bedouin village, Amir tells ISRAEL21c.

From the Caribbean to the West Bank

After learning from the Israeli government about the Umm Batin program, officials from dozens of countries made inquiries to HomeBioGas.

Based on the success of those initial installations, the Dominican Republic’s Ministry of Energy and Mining recently signed a contract with HomeBioGas to deploy TG systems in two additional villages, says Amir. 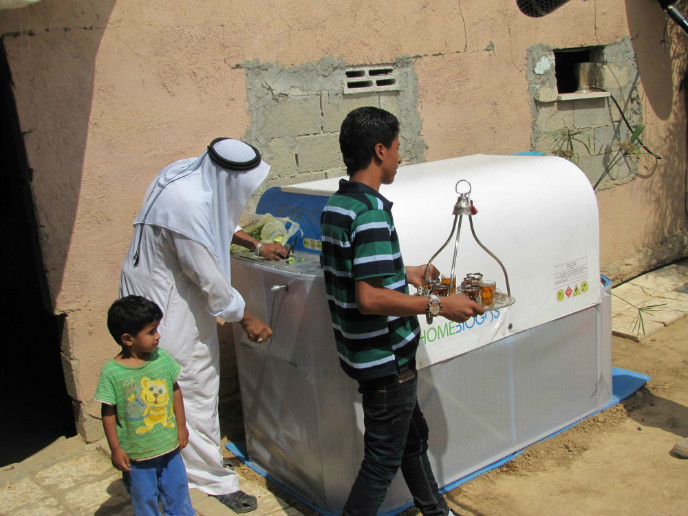 “The combination of social justice and environmental justice is a global solution fitting for Umm Batin, for the Caribbean and for every place in the world,” said Amir Peretz, who was Israel’s environmental protection minister when the units were first installed in both places.

“We found a way to generate cooperation with the Bedouin population from remote communities who feel that as a result of this, the country cares about them, and therefore, the chances are great that this project will succeed and become a model for the world,” Peretz said.

The units are in use in the Arava desert in an off-grid village is owned and managed by the Eilat-Eilot Renewable Energy Initiative. And the Peres Center for Peace in Jaffa arranged to buy the user-friendly biodigesters for two Arab communities in Palestinian Authority-administered areas of the West Bank that lack proper waste-disposal systems. These units will be shipped before the summer, Amir tells ISRAEL21c.

HomeBioGas did not invent household biodigesters, but improved on existing models.

Amir explains that HomeBioGas cofounder Yair Teller traveled to Mexico about eight years ago to observe small biogas systems in use there, and went to additional countries to learn more about their operation.

“When he came back to Israel, he wanted to start a similar activity here,” says Amir.

Teller and partner Oshik Efrati acquired biogas systems from overseas — primarily China and India – and installed them locally, only to discover they really didn’t work well.

Three years ago, the partners were joined by Erez Lanzer and did some market research. They found that about 2.7 billion people live in places without access to clean energy or proper garbage disposal. More than 40 million home biogas systems have been installed by governments and aid agencies worldwide, mainly in farming communities. Some 50 million more are expected to be installed by 2020.

If the Israelis were to make a go of their enterprise, they clearly had to develop an improved system. Over the next two years, they built prototypes until commercializing TG last summer.

The units, manufactured in Israel, have a built-in grinder for food waste, a tap for rinsing off plates, a sink and a manual mixer. A bio-filter reduces odors, and a chlorine filter eliminates pathogens in the fertilizer produced. The company, based in Beit Yannai, claims that TevaGas biodigesters can generate enough gas to cook three meals daily, assuming the household “feeds” it all its organic waste.

HomeBioGas works with local distributors that sell, install and service the TG units.