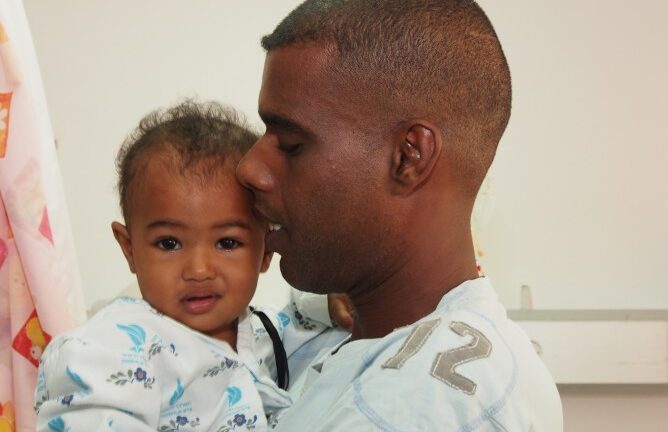 Fajar and her father. Photo by Sheila Shalhevet/SACH

Three days before the ceasefire that has brought quiet in Israel and Gaza, an officer in the Palestinian Authority in Gaza braved the danger to bring his 10-month-old daughter, Fajar, to be prepped for lifesaving surgery at Wolfson Medical Center in Holon through Save a Child’s Heart (SACH). Fajar and her father. Photo by Sheila Shalhevet/SACH

Fajar’s parents are well-acquainted with SACH. Last year, Fajar’s older sister Zachra, now two, was treated at Wolfson for a different type of heart condition. Zachra is due back at the hospital next week for reevaluation for a second surgery.

SACH spokeswoman Tamar Shapira tells ISRAEL21c that Fajar, the youngest of three sisters, was found to have a heart defect during a routine medical checkup in Gaza. “Fajar is learning to stand holding onto furniture, or her father, whom she holds onto for security.”

Fajar is now recovering at Wolfson alongside children from Syria, Iraq, Tanzania, Ethiopia and Romania.

“In the bed next to her in the pediatric intensive care unit is little Rumaisa, a two-week-old baby girl from Gaza who had an extremely complex heart surgery last week,” reports Shapira. “Rumaisa arrived in an ambulance from Gaza in one of the most difficult days of the fighting in Gaza. She arrived in a very bad condition and the doctors needed a few days to stabilize her condition before operating. She is now recovering nicely and her grandmother, who doesn’t leave her bedside, is finally smiling.”

Click here to see ISRAEL21c’s story about one of those children, and here to read about a Yazidi child from Iraq getting treatment through SACH.

To date, SACH has saved the lives of some 3,400 children from Africa, South America, Europe, Asia and throughout the Middle East.