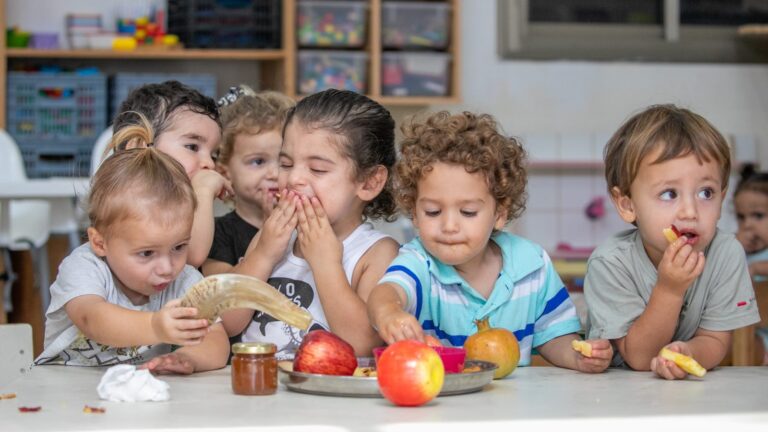 Young children learn about the customs of Rosh Hashana ahead of the holidays. Photo by Yossi Aloni/FLASH90

On the eve of the Jewish New Year, Israel’s population stands at 9.246 million people, the Central Bureau of Statistics reported, marking an annual population growth rate of 1.6 percent (150,000 people).

According to the CBS, 6.841 million of the people in Israel are Jewish (74% of the population), 1.946 million are Arab (21%) and 459,000 (5%) are members of other groups such as non-Arab Christians, members of other religions and people without religious classification.

In 2019, the life expectancy for men and women in Israel stood at 81 and 84.7, respectively – higher than the OECD average.

Also in 2019 and prior to the outbreak of the coronavirus crisis, 88.8% of the Israeli public over the age of 20 reported satisfaction with their life and financial situation. During lockdown, however, 34.4% reported feeling stressed and anxious.

Meanwhile, the Israeli Honey Board reported that some 2,000 tons of honey will be marketed during the High Holidays, out of the 5,000 tons of honey that is consumed in the country throughout the year. All this honey is produced by the 510 beekeepers operating in Israel, who take care of around 120,000 beehives.