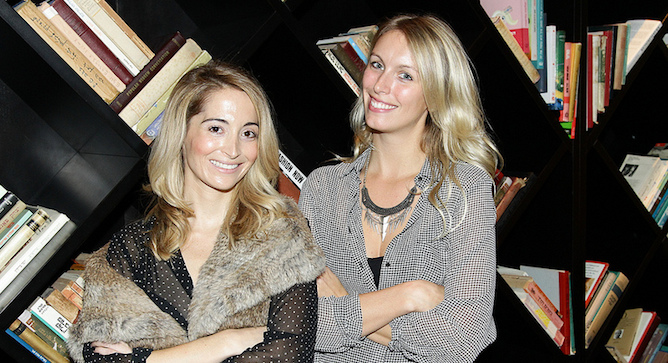 Pink, red, emerald, purple and black are this fall’s colors according to the catwalks. But two Tel Aviv-based trendsetters – behind a new global community dedicated to keeping the hipster crowd hip — say black and white are the colors to look for on the street.

And they should know.

Alex Schinasi and Lee Rotenberg, two transplanted entrepreneurs to Israel, founded Artsetters – a website, popup shop and creative community now taking the world of ecommerce by storm. It’s a platform that unites the world through art and design.

Their site serves up the crème of creativity from across the globe and includes designers you should not admit you never heard of. The purpose, according to the mission statement, is to “bring the coolest content to our users from unique artists and designers hand-picked by young creative influencers in cities around the world. We hope to break the often impenetrable scenes of cities like Beirut and Hong Kong and grant access to unique products long before they become mainstream.”

Schinasi and Rotenberg officially launched a beta version of their website in the last week of October. It already includes works by more than 80 artists in 19 creative cities – including Tel Aviv.

“I completely think Tel Aviv is one of most creative cities out there. If you don’t come to Tel Aviv, you don’t understand how vibrant the culture is here, how cool creativity is here,” Rotenberg, who hails from the United States, tells ISRAEL21c. “It is so different from any other place.”

Schinasi, a former film producer who came to Israel to work on a movie two years ago and fell in love with Tel Aviv’s culture vibe, and Rotenberg, who comes from the world of finance and is equally enamored by the city’s pulse, first began promoting their joint venture just over four months ago.

Word got out. Curators, magazine editors, fashion stylists, photographers, architects and fashion hipsters all volunteered to help make Artsetters the place to click for the next “it” thing. The volunteers are known as Artsetter Ambassadors.

Rotenberg points to the staff’s international background as one of the key elements for early success.

“I’m American, my co-founder is from Switzerland, our graphic designer is Canadian and our editor is Belgian. We’re all from different countries and we all met in this country. Tel Aviv is a city comprised of internationals. And it really helped to give birth to the idea of Artsetters,” Rotenberg tells ISRAEL21c.

“At the end of the day, trendsetters aren’t thinking politics when thinking what’s cool. That’s how I think we’ve had Artsetters grow so quickly,” she says. “People identify with the language of great taste and trends.”

So far, designers from Athens, Berlin, Brooklyn and Casablanca have been among the bestsellers on the site, says Rotenberg. Graffiti artist Pilpeled, who has a line of black and white T-shirts, is one of the best-selling Israelis to date. In fact, Pilpeled’s shirts have become a hot commodity in Beirut.

Because technically it is illegal to sell Israeli-made goods in Lebanon, Artsetters ships the clothing from Israel to its American office, cuts off all incriminating labels, and sends the orders to Beirut.

“The T-shirts are incredibly popular in Beirut,” says Rotenberg.

“Usually it’s two very distinct communities, Lebanon and Israel, but under the umbrella of Artsetters it becomes this unified community,” Schinasi told The Times of Israel. “What’s uniting them is this love of art and design, and you know, cool content.”

The opposite of Etsy

Artsetters, says Rotenberg, is the opposite of Etsy, where solo designers can sell jewelry and crafts.

Artsetters uses its ambassadors to “pinpoint what’s really cool” for shoppers. Whereas on Etsy anyone can put up their wares for sale, on Artsetters you have to be chosen by someone in the know.

“We’re an ecommerce site but we’re very selective and highly curated. We’re also on a city-specific platform,” she says.

The prices range from $10 to $5,000. “People are definitely buying,” says Rotenberg. “You can get handmade sunglasses from Moscow for $190, which is an incredible price, or great air roller cabin bags from Geneva for $40, which have been huge.”

They have received no funding (but are looking for some). They did get workspace in Tel Aviv’s startup incubator. The site is listed as an American company with an Israeli incubator.

So, what’s the next trend?

“Each city has its own trend. To be in Tel Aviv wearing something from Beirut — or vice versa — is trendy,” says Rotenberg. “Black and white is a trend across all cities. There’s also a big trend in the direction of handmade items. It’s hard to find handmade at affordable prices.”