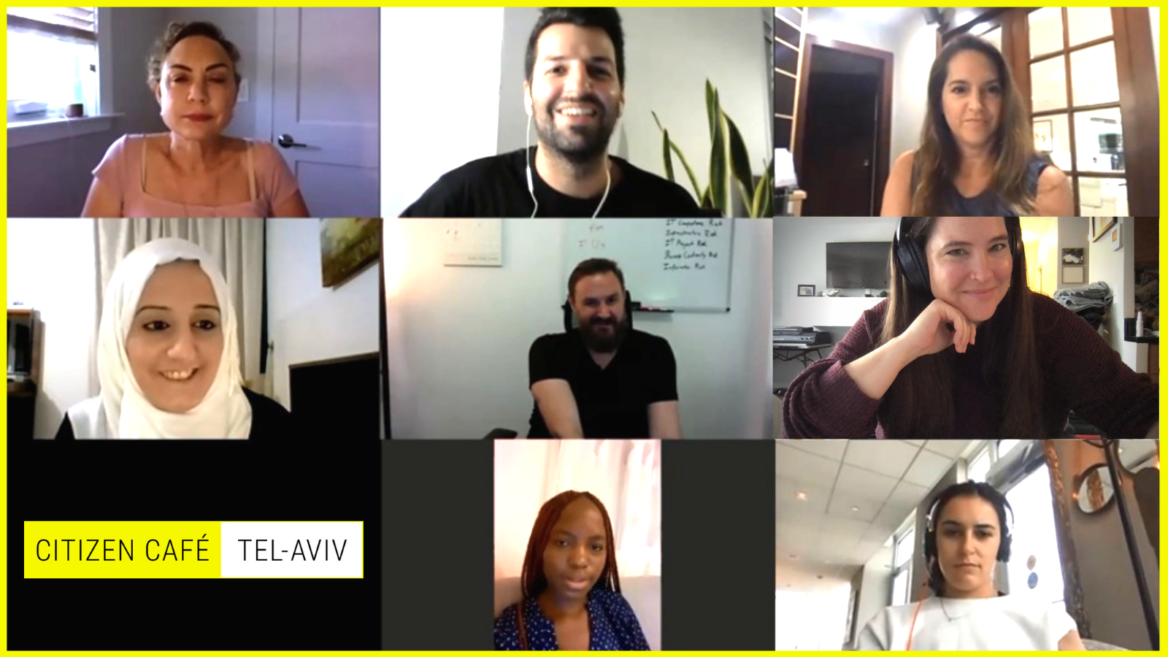 Maysoon Hameed comes home from work as a vice president of an Emirati bank, spends time with her family – and then begins a 90-minute live Hebrew class online.

“After the UAE signed [the Abraham Accords] with Israel, there are a lot of investment opportunities” for both sides, Hameed tells ISRAEL21c.

“To make connections and build relations, you need something in common with the other party no matter where in the world they are. You have to find a common comfort zone,” she says.

“If I have colleagues from Israel, we don’t have to speak English all the time, even though that is the international business language,” says Hameed. “We will feel closer speaking in a mother tongue.”

Hameed is one of nine Emirati students of Citizen Café in Tel Aviv – six from Abu Dhabi and three from Dubai – plus four from Bahrain.

“We have always had ambassadors and diplomats from around the world, so we barely noticed a few businesspeople from the UAE before,” says Tamar Pross, who founded Citizen Café Hebrew language and Israeli culture school in 2015.

“But when the peace agreement happened, an article in Israel about Emirati diplomat Omar Saif Ghobash mentioned that he’d been studying with us. Suddenly we noticed a huge amount of people contacting us. So we started to promote Citizen Café in the UAE and in Bahrain as well. We were the first to do it.”

Pross says that Ghobash – whose self-taught Hebrew allowed him to enter Citizen Café at a high level – and other “extremely educated, sophisticated, lovely people from the Gulf tourism and business sector are all so excited and interested to engage with Israelis.”

When UAE students are asked why they want to learn Hebrew, “some said they already have Israeli friends and wanted to impress them. Some are Jews living there and discovering their heritage,” says Pross.

“They all tell us how motivated and eager they were to connect and engage with Israelis, and a lot said they can’t wait to visit. The Emiratis are very active on our social media groups.”

Hameed says learning Hebrew “is super fun. The teacher is cool and casual. Each class is 90 minutes, but it feels like nine minutes.”

Pross notes that the pandemic has been a busy time for Citizen Café. The fall semester encompasses 60 classes over Zoom. The staff was increased from 10 to 40 to meet the demand coming from countries spanning China to America.

Yoel Ganor, who cofounded Ulpan-Or in 1995, said demand grew in the first wave as people got comfortable using online platforms like Zoom.

“People realized they could study Hebrew in a more condensed way and master a level in five or 10 days,” Ganor tells ISRAEL21c.

Ulpan-Or provides Hebrew lessons to about 100 middle and high schools abroad, mainly in North America. “Now schools in Germany and the UK have joined us, and Covid accelerated our development of an online program for preschools that we recently introduced in five sites to a very beautiful response,” says Ganor.

“Even before Covid and the peace agreement, we had a few students from the Emirates and Bahrain, but they did it semi-secretly; we paired them with teachers who work from countries outside of Israel. Now two of our students there tell us of growing interest from the younger population in learning Hebrew.”

Gil Pentzak, director of Ulpan Aviv,  also saw an increase in students – both adults and children — during the first wave of the pandemic in March.

“Right after the Abraham Accords were signed with the UAE, I started getting leads from people there. Every week now, I get a lead from Bahrain or the UAE and sometimes from countries such as Jordan, but it has not yet developed further,” Pentzak tells ISRAEL21c.

“We moved to an online platform at the start of the pandemic and now people are learning online from just about everywhere — Argentina, the US, Canada, Australia, South Africa, Italy and many other European countries,” says Steinberger.

“We don’t have UAE students yet, but we would welcome them.”