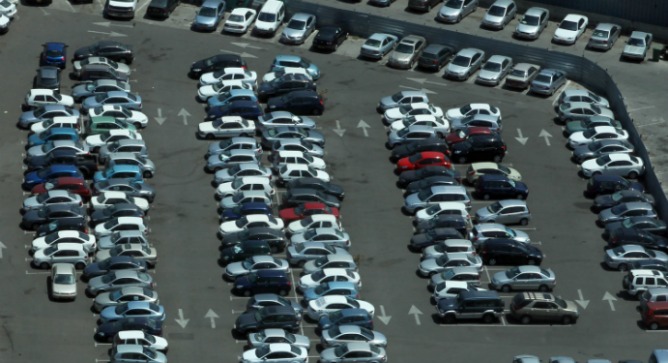 Snapshot of a Tel Aviv parking lot by Nati Shohat/Flash90.

Tomer Neu-Ner was driving home from the hospital with his wife and newborn son. As always, parking was tight near Neu-Ner’s central Tel Aviv apartment.

“I was a nervous new father,” he says. “I didn’t want to leave my baby in the car more than even a minute longer than I had to.” So he stopped the car briefly on the sidewalk, ran upstairs, got his family settled and returned to his vehicle only to find … a NIS 500 ticket on the windshield.

That wasn’t the only time Neu-Ner has battled the parking gods who have decreed that the average Tel Aviv resident will spend 24 minutes on average looking for a parking spot. But it was the wakeup call that, if Neu-Ner’s new startup Parko succeeds, will transform life for curb-deprived drivers everywhere.

Neu-Ner teamed up with his cousin Itai David, a Technion graduate whom he describes as an “algorithm geek.” Together they created a smartphone app that almost magically senses when a parking spot will become available – even before the car’s driver opens the door.

The technology is based on the same principles that have made fellow Israeli tech startup Waze such a darling of the roads, but there is no connection between the companies.

Waze informs drivers where traffic is heavy and suggests alternative routes, all without requiring any active input by users. The app uses GPS to sense when cars with the open app are slowing down and from there it extrapolates that data into traffic alerts.

Parko also uses GPS to sense the user’s speed. Once the vehicle has stopped and the speed at which the phone is moving has slowed to a comfortable “walking pace,” Parko assumes the user has parked. When Parko senses the user returning in the direction of the parked car, the app sends a message to other users that a spot may soon open up.

Neu-Ner and David built the app so that it minimizes access to the phone’s GPS, a critical feature given how quickly location service usage drains a mobile device’s battery.

Parko is not alone in the parking alert business. The elephant in the room, as it so often is, is Google, whose OpenSpot app for Android phones does much the same thing as Parko with one pachyderm-sized difference: OpenSpot requires drivers to tap the app to alert other users that they’re leaving their parking space.

This is also an option for Parko users. However, Neu-Ner says, it is not ideal because by the time the alert hits the cloud, the space will almost always be long gone.

A very different approach is being taken by ParkSF in the San Francisco area, which involves sensors buried under the street that will alert drivers when a spot is being vacated in real time. Neu-Ner says there is talk in Tel Aviv about deploying something similar, although he believes the entirely crowd-sourced approach has more mileage, so to speak.

After Parko’s October launch in Tel Aviv, Neu-Ner has his eyes set on Paris and New York. Statistics for both those cities put the average time someone looks for a parking space at 40 minutes, nearly double Tel Aviv’s.

There’s no database to be updated before a city is ready for Parko. It’s more a matter of promotion and marketing, something that’s tough on a shoestring budget of money from friends and family. Neu-Ner is in the process of lining up an angel investment of $500,000 to $700,000.

He is taking the “give it away, charge later when you’ve built a huge user base” approach common to startups (remember Facebook?). At that point, “location-based advertising and the sale of data will be worth so much more.” He also anticipates that freemium (paid) features and “demand-based pricing will become very interesting options for revenue models.”

The 30-year-old Neu-Ner grew up in South Africa with Israeli parents. He returned to Israel four years ago and worked as a product manager at a startup creating software for options trading on Wall Street. He has degrees in economics and math from the “old country” and, more recently, an MBA from Tel Aviv University.

While Parko users stand to benefit when they search for a spot, we wondered what kind of incentive would entice users to leave the Parko app open once they found parking. Neu-Ner has a quick answer: prizes. For example, after you’ve just shared your 20th parking spot, you might get a free carwash from a Parko partner, or a coffee at a nearby Aroma.

Regardless of prizes, Parko needs a critical mass of users to function effectively. Thousands of Tel Aviv residents already know about the app, in part due to Parko’s win of the top prize at the Google-sponsored Israeli Mobile Challenge competition in June.

UNCOVER ISRAEL - Get the ISRAEL21c
Weekly Edition free by email
Sign Up Now!
Bring Israel's story to life.
Millions of people around the world rely on us to gain a deeper understanding of Israel. We are the trusted source for original content you won't find anywhere else.
You can make a difference. Donate today to support journalism that brings Israel’s story alive.
SUPPORT ISRAEL21c
Read more on:   parking, Technology, Tel Aviv, Mobile, Israeli apps