The hopes to produce a professional, top caliber, mixed Jewish-Arab team that will represent in prestigious international tournaments. 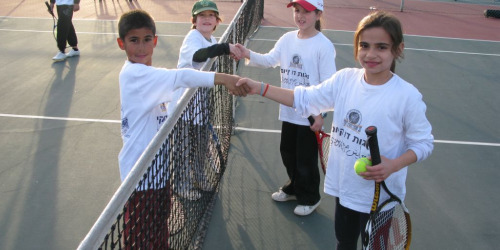 It was for the love of tennis and the chance to win the Dubai Open that Israel’s female tennis champ Shahar Peer headed to Dubai in February this year, only to be defeated by Venus Williams of the United States. Peer’s visit and her participation in the tournament were tightly guarded by the security service of the United Arab Emirates’ suspicious government.

In the Middle East, politics and mistrust permeate nearly every aspect of life, even events as seemingly innocuous as music recitals, book readings, film screenings – and sports. However, the Israel Tennis Center (ITC) believes that the sports arena is fertile ground for untainted coexistence. And it’s achieving this by focusing on uncompromising professionalism in a Jewish/Arab program and nurturing that coexistence as an outgrowth of the experience.

Established 35 years ago, the non-profit ITC has discovered that via tennis, people can learn to be more tolerant of one another. With 14 training centers, mainly in poorer and peripheral locations throughout Israel, the crown jewel of its activities is the Doubles Coexistence Program, which partners Jewish and Arab youth and trains them as competitive doubles players. About 130 youths ranging in age from seven to 14 are currently enrolled.

While the Israeli Arab community has yet to produce a tennis champ – Israel’s biggest tennis stars today are Jewish Israelis Peer and Dudi Sela – program director Shachar Yanai dreams of the day when a mixed Jewish-Arab team will compete in the top international tournaments on behalf of Israel. “A future mixed doubles in Dubai? That would be amazing,” Yanai says to ISRAEL21c. He hesitates for a moment before adding, “It will happen.

The peace through tennis ‘parent trap’

“The parents are so invested in it, and they see each other when they drive their kids to tournaments. They wouldn’t have this relationship if they weren’t involved in tennis. They also wouldn’t have this if we weren’t aspiring to create the best tennis players.”

The mixed doubles program, which partners a Jewish and Arab player according to skill, not gender, is fiercely competitive. From the very beginning, the Doubles Coexistence Program has focused on creating the most proficient and professional players; it’s not just about amateurs having fun.

The organizers are well aware that it’s the topnotch training sessions and the high level of coaching and competition that keeps the kids and parents committed to the program. And they need strong commitment to achieve their twin goals.

If it were just about Jewish and Arab kids from Israel playing together for fun, “in terms of dollars we could bring many more kids,” asserts Yanai. “But if it’s not the highest competitive level we won’t have the kind of investment needed from [kids and parents] to improve the relations between them.”

In line with the high standards of the program, gaining acceptance is the first hurdle. There’s an initial screening process to test whether or not a child is suitable for the sport. If within three years a participant hasn’t made sufficient progress, he or she is asked to step down and join a different program, for amateur players.

Heavily subsidized and free for the participants, kids in the Doubles Coexistence Program are expected to train for four to eight hours a week, play in regular tournaments and attend a weekly social event where dialogue and interaction are encouraged in both Arabic and Hebrew.

In tournaments, Jewish-Arab doubles matches are played in different categories ranging from mini-tennis with soft balls, to full-court games, depending on the level of tennis expertise.

The process is the goal

This is no free ride. The youngsters are all taught the meaning of ‘paying it forward’ and are expected to give back to the community through various volunteer activities, including those that contribute to the environment.

Operated at four of the ITC’s facilities throughout Israel, the coexistence program targets some of the country’s most diverse and weak populations. Coaches are hand-picked and trained for their mediation skills, and although there is a shortage of Arab-speaking coaches, those who do speak the language receive special training in communicating with the Arabic-speaking kids, especially the younger ones, who may only start learning Hebrew in school at age seven.

Working with about 10,000 kids throughout the country, the ITC operates in the southern neighborhood of Ofakim, west of Beersheba; in the mixed Jewish-Arab city of Jaffa; in Beersheba with the country’s Bedouin population; in an Arab village in the Galilee, and in 10 other communities. “These are basically the weaker communities in Israel and we are giving them an amazing experience in tennis,” Yanai tells ISRAEL21c.

Meanwhile, a major goal of all the ITC centers is to encourage coexistence across the country by offering a number of special programs in which kids from both sides of the Arab-Jewish divide practice and play together. There’s even a mixed program for kindergarteners in Jerusalem and in Haifa.

“We want to create role models for coexistence – a mixed doubles team at an international level is what we are trying to achieve here,” says Yanai. And while he knows that finding that star team may be a one-in-a-thousand shot, he is convinced that the program is a winner for peace. “The process of trying to create a top competitive mixed doubles team itself creates the effect,” he concludes with confidence.