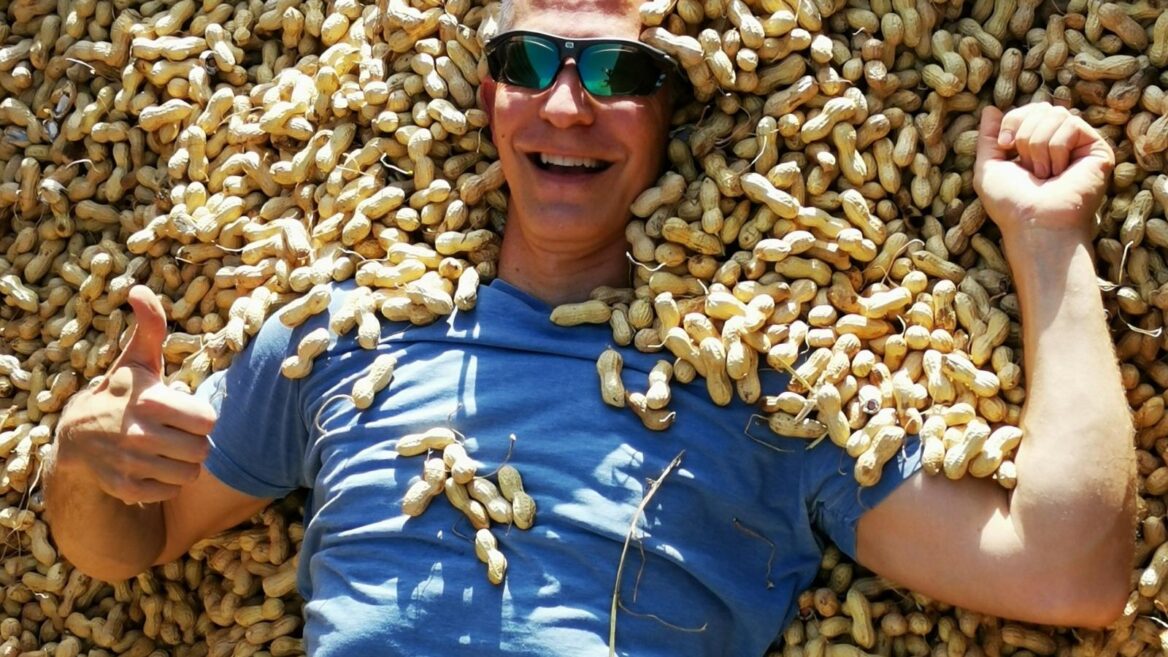 Israeli kids love peanutty Bamba puffs, but are more likely to have chocolate spread than peanut butter on their sandwiches.

Because peanut butter is such an American classic, Dr. Jason Cohen continued buying American organic peanut butter for his family after immigrating to Israel in 2011 from New Jersey. He’d pack it in his luggage when returning from frequent trips to treat patients at his interventional pain practice in New York.

When Covid halted his travels, Cohen went shopping for an Israeli equivalent.

To his chagrin, he found that Israeli brands mainly use peanuts or peanut powder exported from China.

His inquiries to the Israeli Groundnuts Board revealed that about 70 percent of Israeli-grown peanuts – of exceptionally high quality, by the way — are exported to Europe in the shell.

“It was simply a game of economics,” Cohen says.

His quest for locally sourced quality peanut butter, and his newfound free time, led this anesthesiologist to launch a business with his wife, Donna, a social worker.

Sales of Holy Butter 100% Israeli peanut butter began on July 1, 2020. Its popularity is spreading like, well, peanut butter on bread.

They soon added a line of 100% Israeli almond butter. Both Holy Butter products are certified kosher and are expected to hit American shelves in the near future. 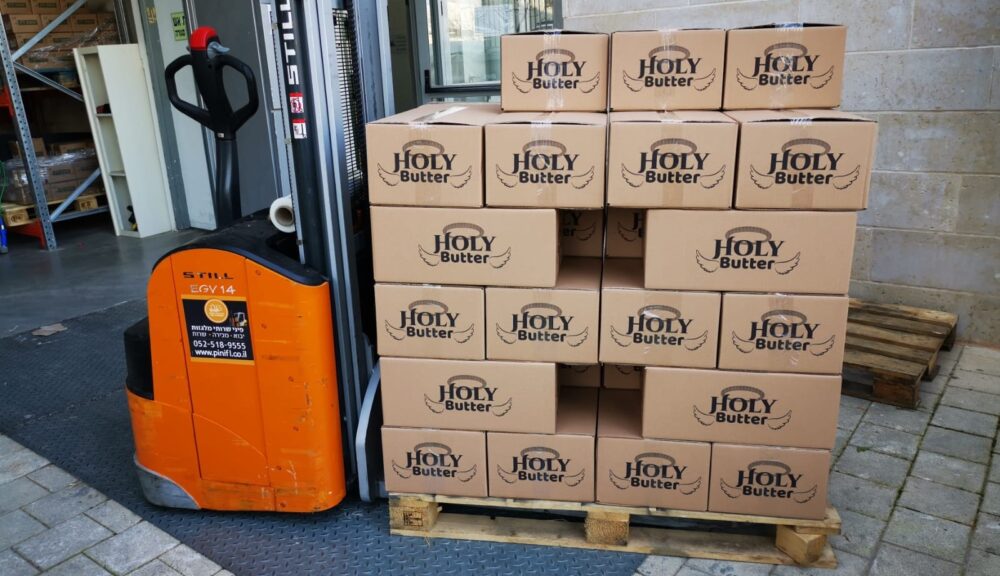 Cohen, 46, says that learning about growing peanuts, roasting peanuts and making peanut butter was like doing another medical residency.

He visited peanut farms to learn about the different species of peanuts grown across Israel. He visited roasting and sorting facilities.

It became clear to him that there is something unique about Israeli peanuts although few people even know they grow here.

“And then a peanut farmer in Texas made a video touting his peanuts, and he said only one is better than his, and that’s in Israel. When I heard that, I fell off my chair. It validated what I was discovering,” Cohen tells ISRAEL21c. 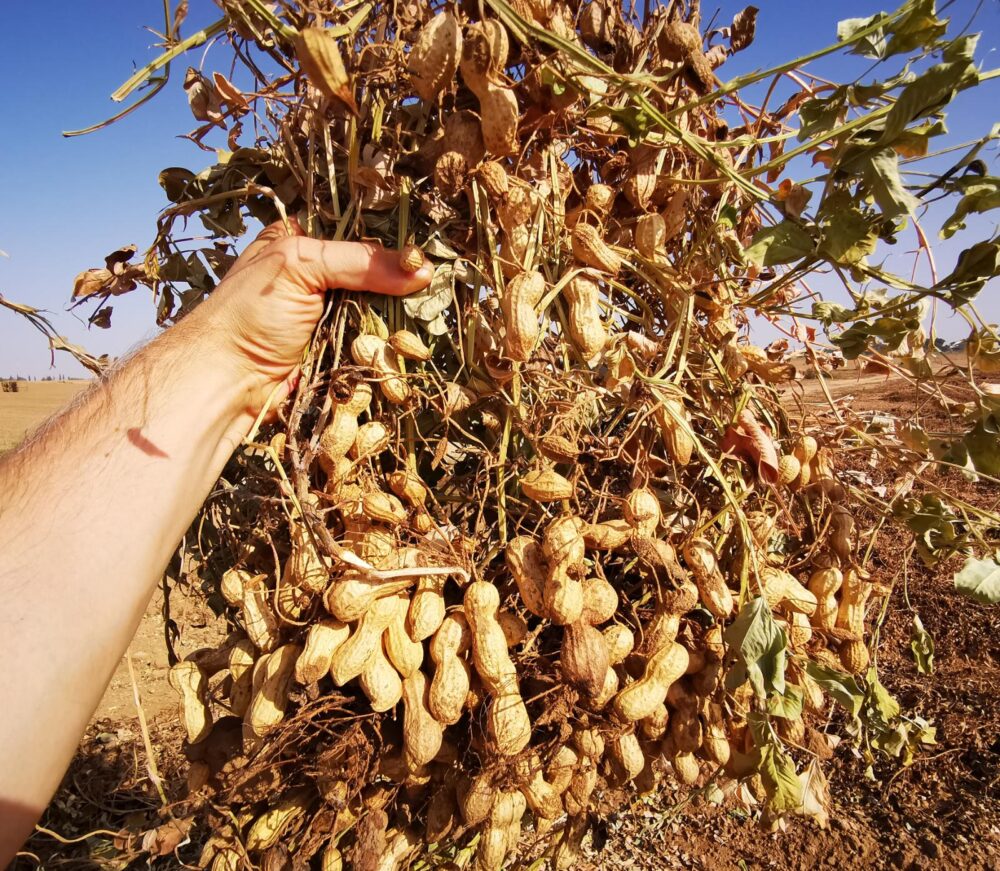 Israeli-grown peanuts are renowned for their high quality. Photo by Jason Cohen

He imported some basic grinding machinery, set it up in the storage room of his Modi’in home, and started experimenting.

“We are big wine drinkers, so I applied the knowledge I’ve gained from drinking alongside experienced oenophiles and speaking with wine growers and winemakers,” says Cohen.

Any basic varietal, like cabernet, will produce different flavors depending on its terroir and the skill of the winemaker. So too with peanuts. Cohen found the flavor profile he sought in farms of the Western Negev. 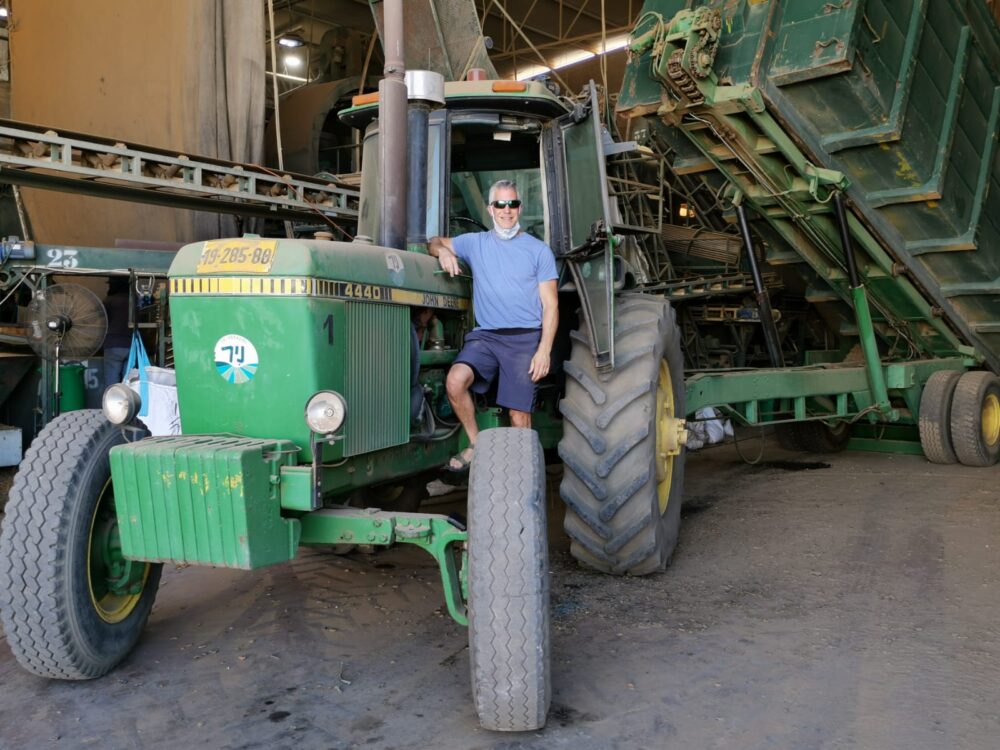 Dr. Jason Cohen with a truckload of Israeli peanuts. Photo by Donna Cohen

And just as coffee beans don’t taste or smell like coffee until they are roasted, so too with peanuts.

“A raw peanut tastes like a fresh green pea, earthy and a bit starchy,” Cohen explains. “When you roast it, it’s completely different. We identified the peanut that worked best and perfected our recipe by finding the right temperature and time for roasting.”

Holy Butter’s process retains some of the peanut skins to add flavor, color and texture as winemakers do with grape skins.

“Our peanuts, grown by local Israeli farmers in the sandy soil distinctive to the Negev, undergo a signature roasting and cold-pressed grinding to capture our unique rich color, texture and flavor profile with overtones of mocha and caramel,” Holy Butter marketing material explains. 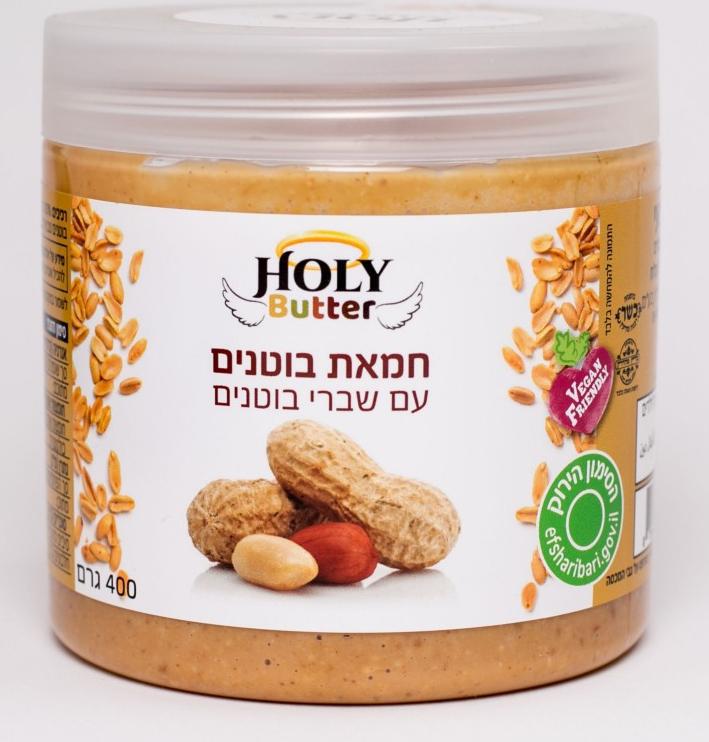 For the first couple of months, Holy Butter was sold from the Cohen home and at open markets in Tel Aviv and in Reut, near Modi’in.

Unsurprisingly, most customers were expat Americans. An article in the Jerusalem Post set Cohen’s phone ringing off the hook.

But by the end of three months, native Israelis accounted for more than 60% of sales.

“We did a lot of marketing and social media and meeting with store owners. It snowballed from all angles and the Israeli media started picking up the story,” says Cohen.

“It makes sense. Israelis love good quality food and are health conscious. They like to get their vegetables direct from the farm.” 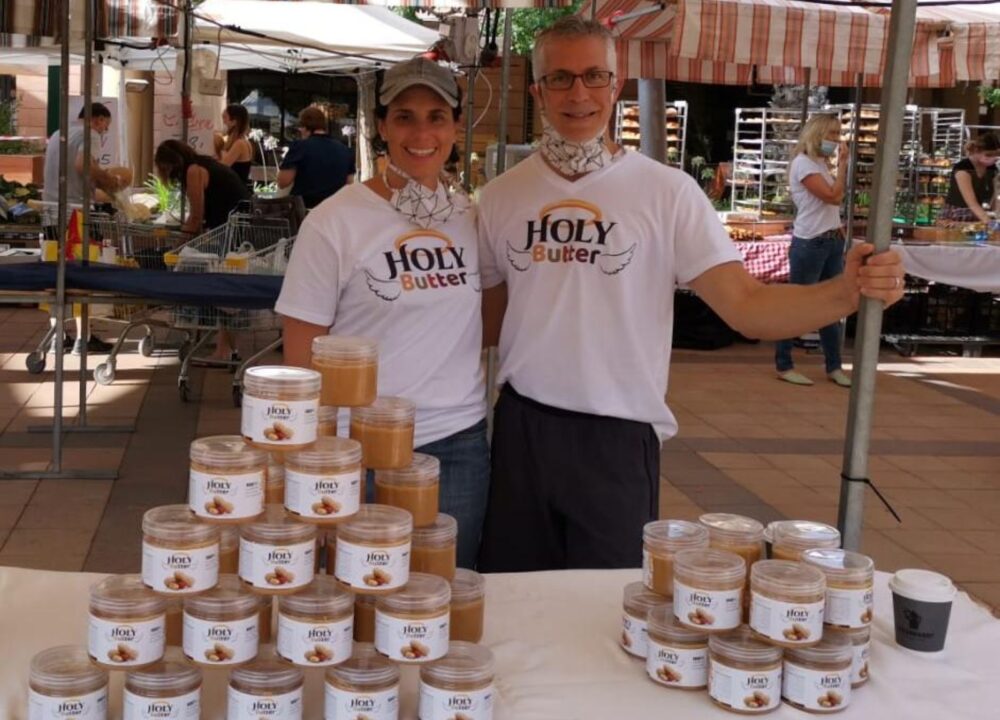 The Cohens also are positioning Holy Butter as an ideal source of high-quality carbs, protein and fat to sports enthusiasts like themselves.

“It was a dream of mine to introduce Holy Butter to athletes who depend on optimal nutrition to fuel their performance and recovery,” says Cohen.

Holy Butter is the nutritional sponsor of the Israeli National Swim Team as they train for the Summer Olympics in Tokyo. Ram Dover, Israel’s national CrossFit champion, signed on as a brand ambassador.

“The nutritional benefit of any nuts is that they contain unsaturated fats that offer health qualities,” says Cohen. “Regular commercial peanut butter incorporates additional ingredients such as sugar and unhealthy saturated trans fats to enhance shelf life and creaminess.”

The peanuts-only Holy Butter product also is slightly higher in protein, he adds. 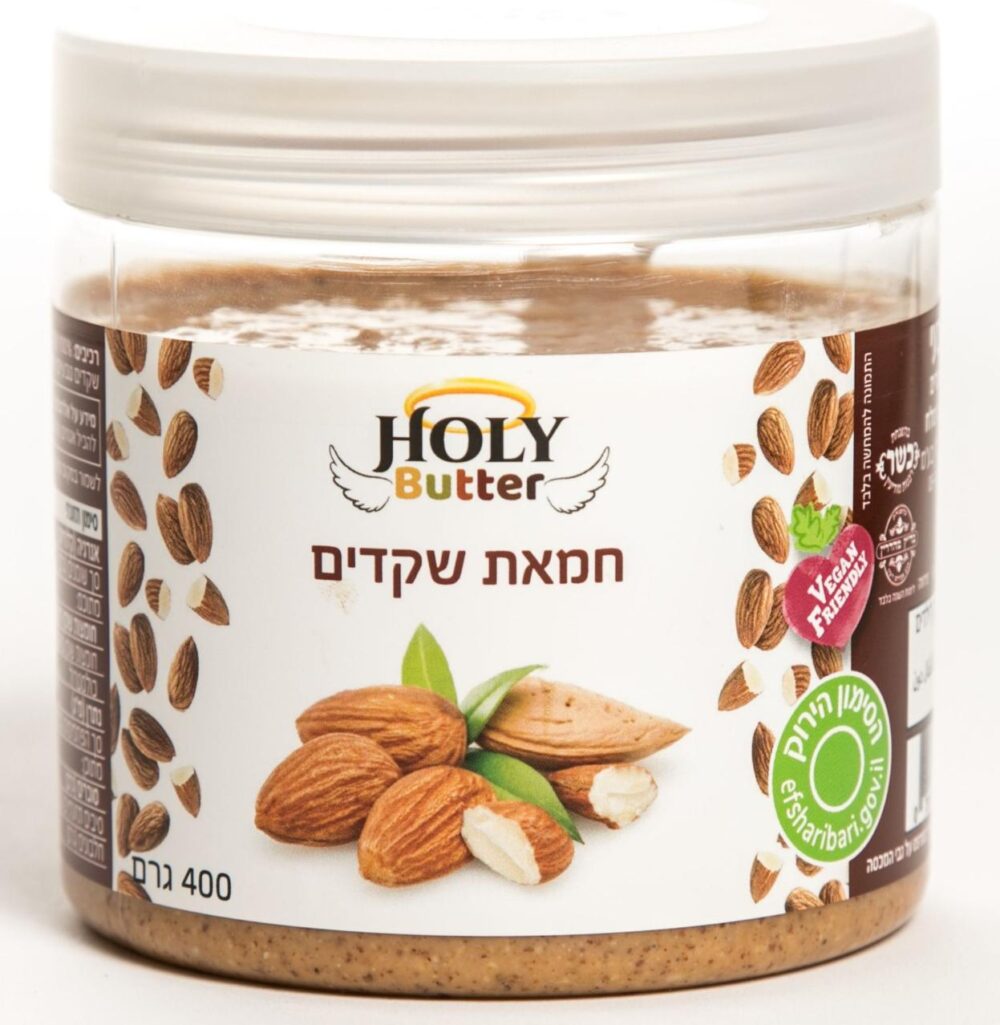 Holy Butter’s almond butter is made with Israeli almonds. Photo by Kinneret Rifkind

As for the almond butter, it’s made from nuts grown near the Sea of Galilee. Israeli almonds are recognized across the world for their superior size, flavor and nutritional content, Cohen says.

“Israeli almonds have 20% calcium, nearly double the amount of their American counterpart. California supplies about 80% of the world’s almond industry but Israeli almonds are far superior. Because we retain some of the skin, our almond butter also is higher in antioxidants.”

Israeli from start to finish

A father of four, Cohen now splits his time between his startup and his medical consulting and practice.

“What motivates me, particularly on hard business days, is that we are bringing light to another wonderful quality of Israel,” he says. The Cohens plan on moving Holy Butter to a dedicated facility to scale up production to meet growing domestic demand and to begin exporting. They also hope to launch a Holy Butter Membership with monthly home delivery.

“We’re producing about 1,000 jars of each butter every month to six weeks, sold online and in retail chains,” says Cohen. “Every day or two we have another store contact us.”

Becoming a peanut butter expert has been an eye-opening experience, he says, “but my excitement and passion comes from the fact that it’s all Israeli. Because of our love of Israel we want Holy Butter to be from Israel from start to finish.”