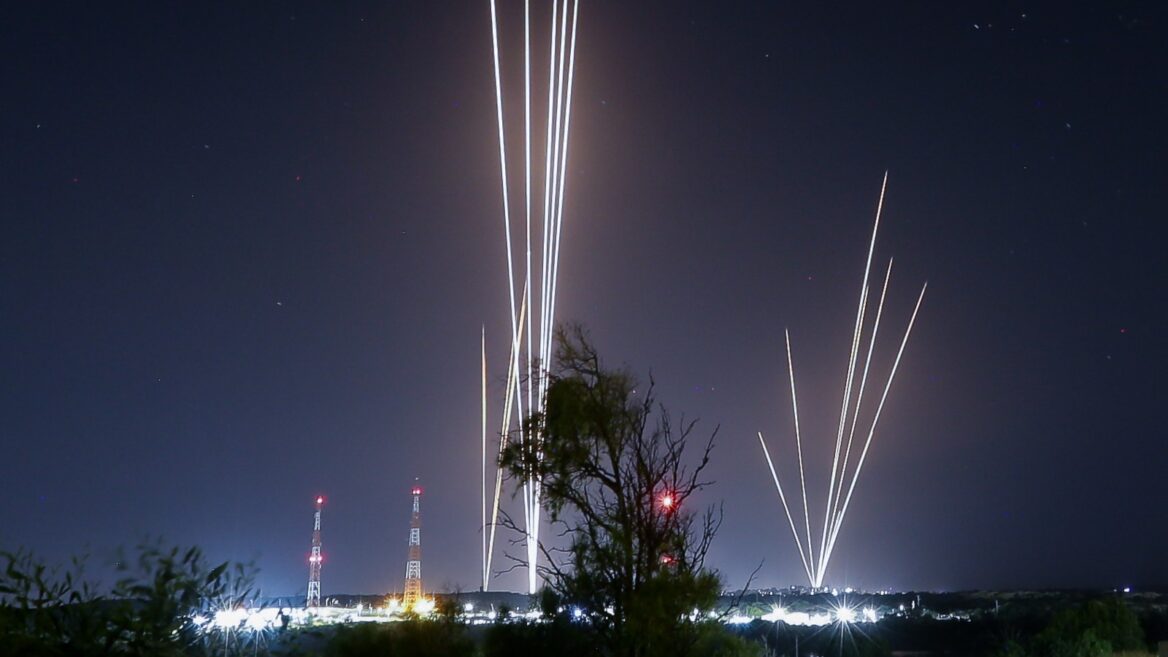 Rockets seen fired from the Gaza Strip into Israel on May 12, 2021. Photo by Edi Israel/Flash90

In these dark days, there is a moment that I cannot shake, a visual imprint that stays with me. It’s Tuesday evening. I’m sitting on the sofa talking to my husband who is abroad on a work trip, and suddenly, unexpectedly, the siren goes off. It’s nearly 9pm, and the only sound we can hear is that awful rising and falling wail.

My middle son and I start to run for the shelter, and as we go by the window, we see not one, not two, but five, six, seven missiles heading in our direction. Bright lights streaking through the sky from the south. One goes “boom” as the Iron Dome hits it.

We run to the shelter and I start fumbling with my phone trying to catch my youngest son, who is 15 and out somewhere in the village with his friends. There’s no answer.

After 10 to 15 minutes, the explosions stop and we go back out and I finally get hold of my youngest. “It’s okay,” he says. “I was at a friend’s shelter. I’m walking home.”

Meanwhile my middle boy is at the window. “Run!” he says. “There’s more.” And I see more and more of those bright lights splitting the dark sky, one really low down seemingly on a trajectory directly towards our village.

“But, mum,” he says, about to give me teenage attitude.

I hear a grumble, and he puts the phone down. Now we’re back in the shelter, and there are more explosions. So many explosions. And they go on for quite some time.

And even after we think it’s all over, and I go to pick up my youngest from a different friend, where he has been staying during the second attack, we see another missile directly overhead, a long bright arc in the sky, then “boom” as the Iron Dome hits it.

I can’t adequately describe what it’s like in Israel now. This conflict has erupted so suddenly, and so devastatingly. The mood is grim. Everyone is frightened. We have no idea where this is going, but it really doesn’t look good.

Almost 20 years ago, ISRAEL21c was founded at the start of the Second Intifada when the Israeli-Arab population rose up and began rioting, and the Palestinians in the West Bank and Gaza responded with terror attacks on buses, cafes, restaurants, schools, markets and malls.

It seems we have come full circle. Although honestly, at this point, the trajectory feels worse. In the 28 years I have lived here, I’ve been through many wars and conflicts, but this is different. It exploded so fast, and so violently, crushing progress in inter-racial relations that has taken years to evolve.

The conflict with Gaza is one element. And for sure this is the worst conflict we have seen in years. We have never had so many missiles fired in barrages at so many places around the country in such a short space of time. And the results are obvious – seven Israelis dead, buses in flames, houses destroyed.

But the second element, the one that worries so many of us, is how this round of violence has spread to the Israeli-Arab population. There is rioting all over the country. Cities like Haifa, Acre (Akko), and Lod that were famous for their peaceful coexistence are now in flames. Restaurants like the acclaimed Uri Buri, a real gem of coexistence, was burned to the ground, while Arabesque, a stunning arts and residency center, was completely vandalized.

This morning, rioters in the Israeli-Arab village next to us began stoning cars that went by on the road. This is our only exit to the wider world. If this village erupts, a village where relations have been so positive for so many years, we are trapped. Not just physically, but in every way.

And it’s not just Arabs involved in the violence. Mobs of Jews are also responding. There are attacks on every side. Hate rallies, confrontations, arson, stabbings, beatings.

In an instant all appears broken. It will take years for mutual trust to grow once more, for us to rebuild these damaged relationships.

Going way beyond the conflict

When ISRAEL21c was founded, our goal was to tell the stories of Israel beyond the conflict. In those days, Israel was only framed internationally in terms of conflict, and we were the first publication to write about the other things happening in Israel. To show the ingenuity, the humanitarian efforts, the extraordinary innovation, and also the fun, and the spirit of creativity. 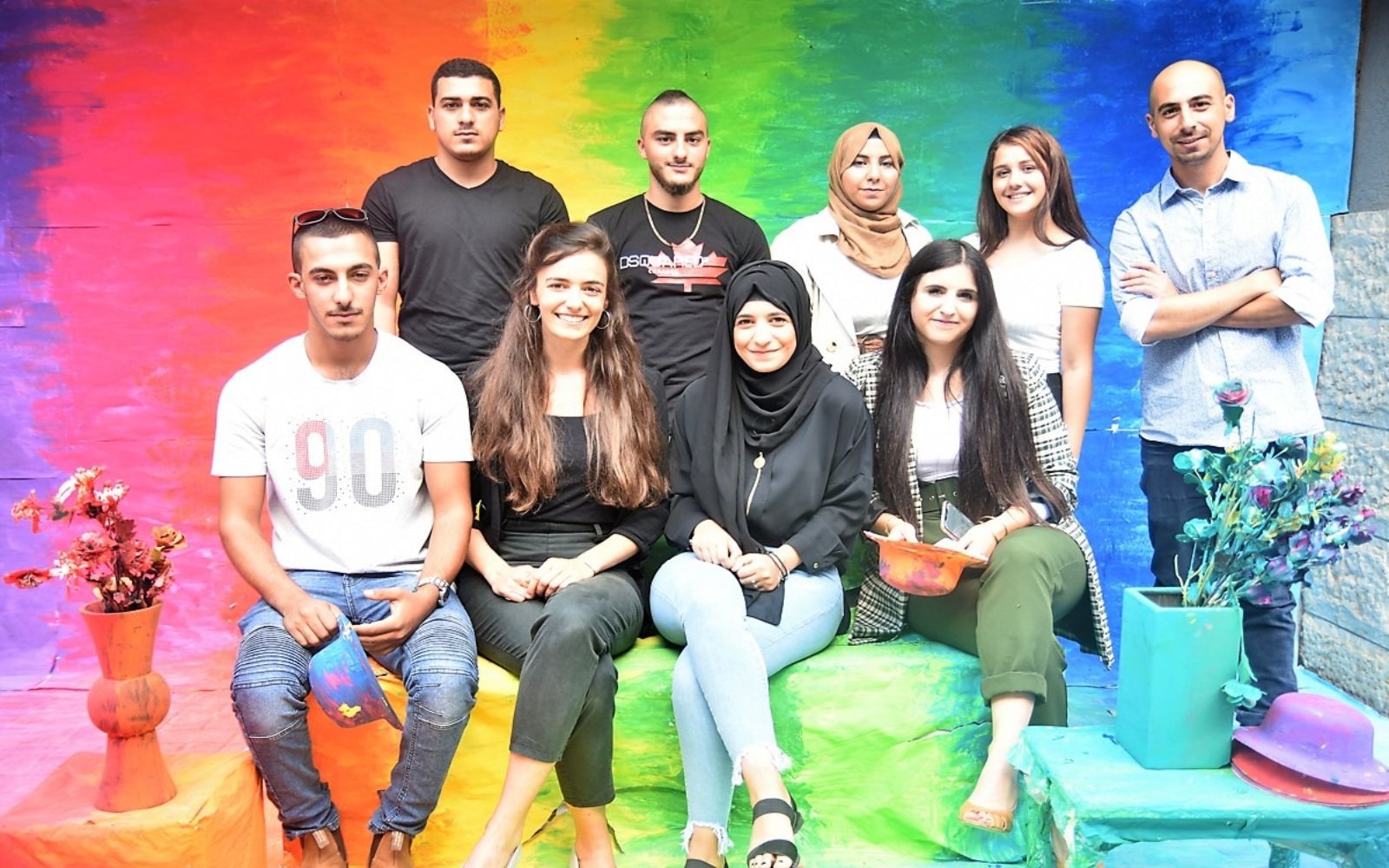 But what does an organization that prides itself on offering alternative visions of Israel do, when it is faced with an all-consuming conflict like this?

The answer is that since those early days, we have evolved into something far greater. We don’t just report on news; we have become an opinion leader.

The stories we write show off the successes of all of Israel’s population – the Jews, the Muslims, the Druze, the Christians, people of every faith and every belief. We celebrate the diversity of Israel, the successes of everyone who lives in this country and calls it their home, whatever their color or race. 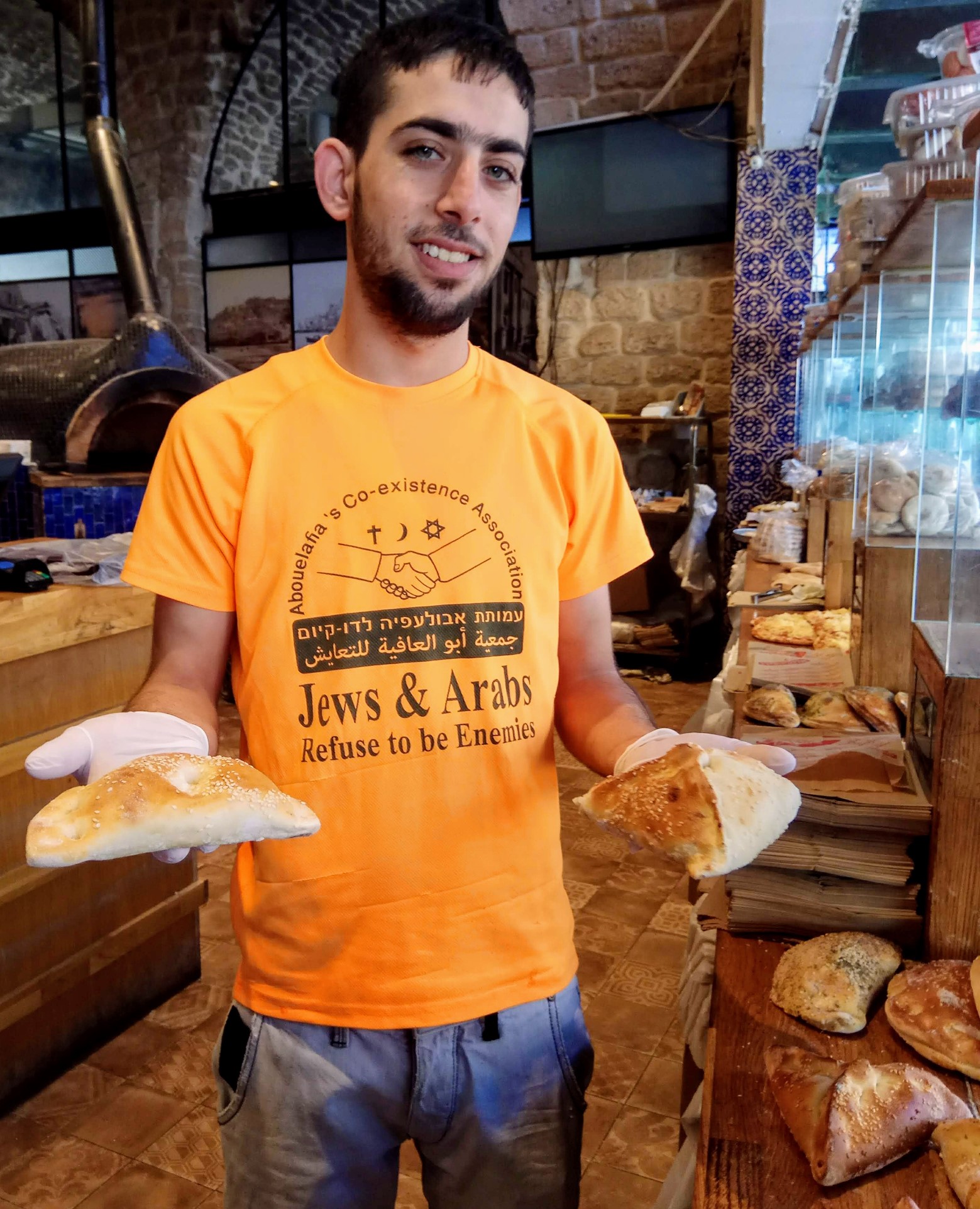 Now, in this testing time, these stories are more important than ever. We are a beacon of light in a very dark time. Our goal is to strengthen Israel – not just abroad, where reporting on Israel is reaching new depths – but at home too.

Our stories are a reminder to everyone that there is far more to Israel than violence. The people of this tiny country can be magnificent. Jews, Christians, Muslim, Druze, there are thousands upon thousands of exceptional people who are working for peace, working to make new technologies than can help us all, people who are creating, developing, thinking and feeling their way to helping others. Even now. Even during this conflict.

We have to remember this. All of us.

The extremism sweeping Israel right now is not a reflection of everyone who lives here. The stories you read in our publication are a celebration of the good, of the people who want to make a difference and to make life better. They offer hope. We need hope.

It is hard. I know it is hard. It is easy to be carried away, to start to hate and fear the other side. With missiles raining down across Israel, with the numbers of dead mounting on both sides, and our army – including my beautiful middle son – now poised on the border of Gaza, it is easy to succumb.

But we shouldn’t. There is more to Israel than this.

What’s happening here now is a huge and challenging setback, but ISRAEL21c is an island in the middle of this insanity. We must all of us, wherever we are, remember and celebrate the goodness that is still at the heart of this tiny country that so many disparate people call home.