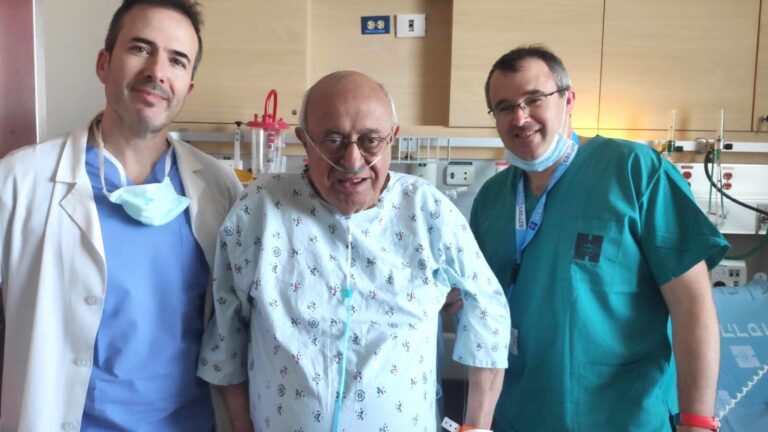 After 74-year-old David Avital fell at home, he was brought to Hadassah University Medical Center’s Ein Kerem campus in Jerusalem with several spinal fractures. He needed surgery to ease the pain and get him back on his feet.

However, Avital suffers from heart and lung issues, which made general anesthesia too risky.

So the Hadassah surgeons decided to do the surgery under local anesthesia. This new procedure, as far as they know, has not been attempted anywhere else but has already proven successful at Hadassah several times.

Dr. Josh E. Schroeder, head of Hadassah’s surgical team for back deformities, explains: “In collaboration with the director of the Brain Catheterization Unit, Prof. José Cohen, we have begun performing complex back surgeries on patients at Hadassah while they are awake, using only local anesthesia.”

With the patient lying face down, the surgeons insert screws and rods to fix the fractures under advanced imaging navigation that allows maximum accuracy with minimal incisions, said Schroeder.

“Prof. Cohen and I stabilized the patient’s spine and with the constant monitoring of anesthesiologist Dr. Rawhi Hashem, we performed the operation without general anesthesia and without the need to intubate the patient, which isn’t trivial.”

“This case demonstrates the modern approach to surgery,” Cohen said. “We take major surgeries and turn them into surgeries with minimal incisions and thus six hours of surgery becomes an hour, general anesthesia becomes local anesthesia, two weeks [of recovery] is shortened to two days. The risk of infections is significantly reduced.”

What did the patient have to say about the procedure?

“When I entered the operating room, I was very scared,” said Avital, a retired military man.

“And when they explained to me that I would be awake throughout the operation I was even more stressed out. It seemed impossible to undergo major spine surgery while awake. Everyone on the team was encouraging, explaining the entire procedure. The surgery went by fast and I didn’t feel any pain at all. I am so grateful to the doctors and staff.”

Avital added that he looks forward to returning to his volunteer activities soon.