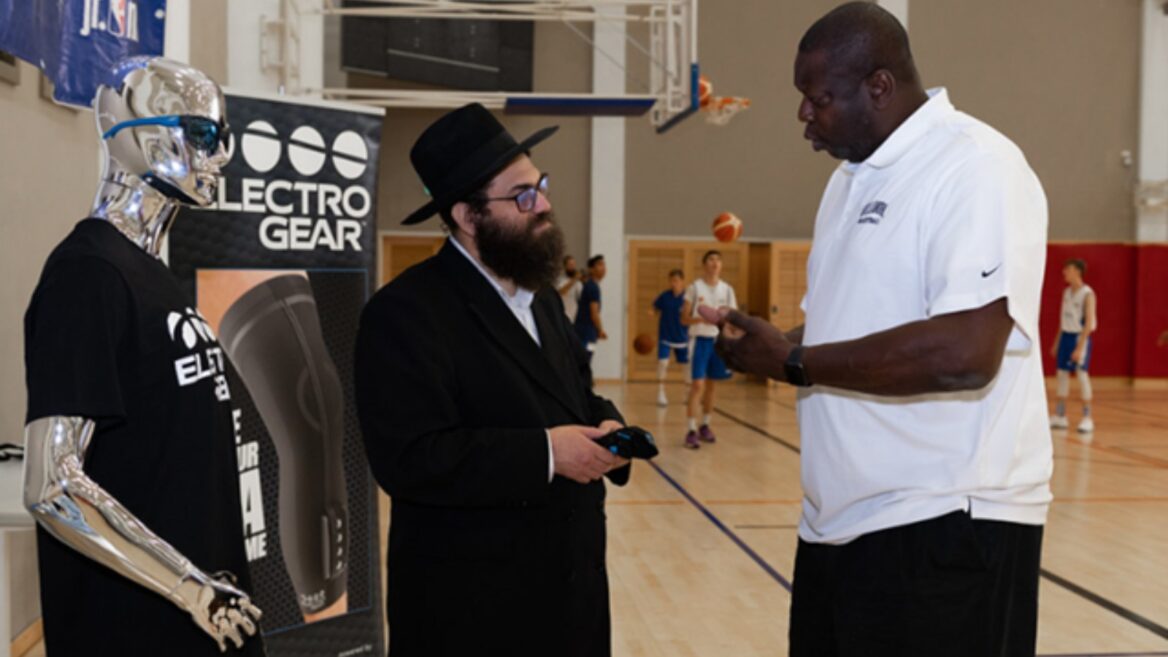 A mild pins-and-needles sensation encircled my forearm as the Healables sleeve was activated from Moshe Lebowitz’s smartphone. The intensity can be dialed up or down with the flick of a finger.

I was in the Jerusalem office of Healables, a startup developing home-based “electroceutical” treatment of pain and inflammation.

The device delivers microcurrent electrotherapy to legs or arms, through a port snapped onto an e-textile sleeve with built-in electrodes.

The flexible, machine-washable sleeve is made in an Israeli factory that manufactures big-brand American sports apparel.

“We tried to make our solution as easy as taking a pill but without any side effects or potential for addiction,” says Lebowitz, the company’s CEO. “By docking with textiles, the treatment is simply like getting dressed.”

Healables is building two products on its technology platform: ElectroGear, a sports-and-wellness model for athletes, to be sold directly and through physical therapists and sports teams; and a medical model to be available by prescription, pending regulatory approval. 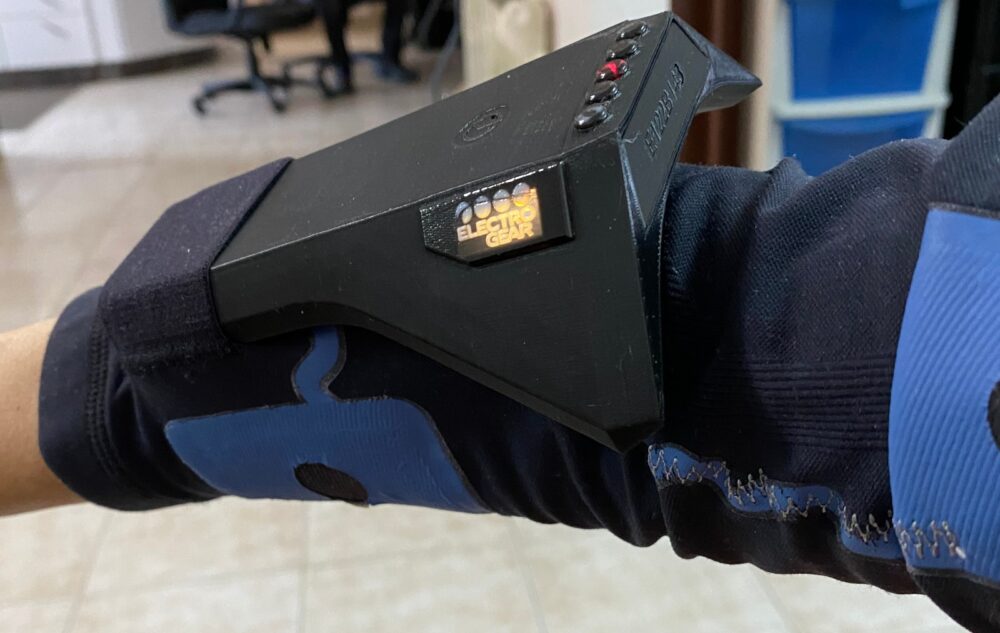 A clinical trial of the medical model soon will begin on patients with knee osteoarthritis, led by Dr. Hadar Oz, chief of sports medicine at Wolfson Medical Center in Holon.

“For these patients we have many kinds of treatments and one of them may be the Healables device,” Oz tells ISRAEL21c. “There is a similar treatment available, but it needs a very large machine. What they did is make it very small and incorporate it into a flexible knee brace. We hope this device will work to lessen the pain and thus allow them better active daily living.”

Another trial will start at Hadassah-Hebrew University Medical Center in Jerusalem on patients with diabetic peripheral neuropathy, a common and painful leg, foot or hand complication of diabetes. 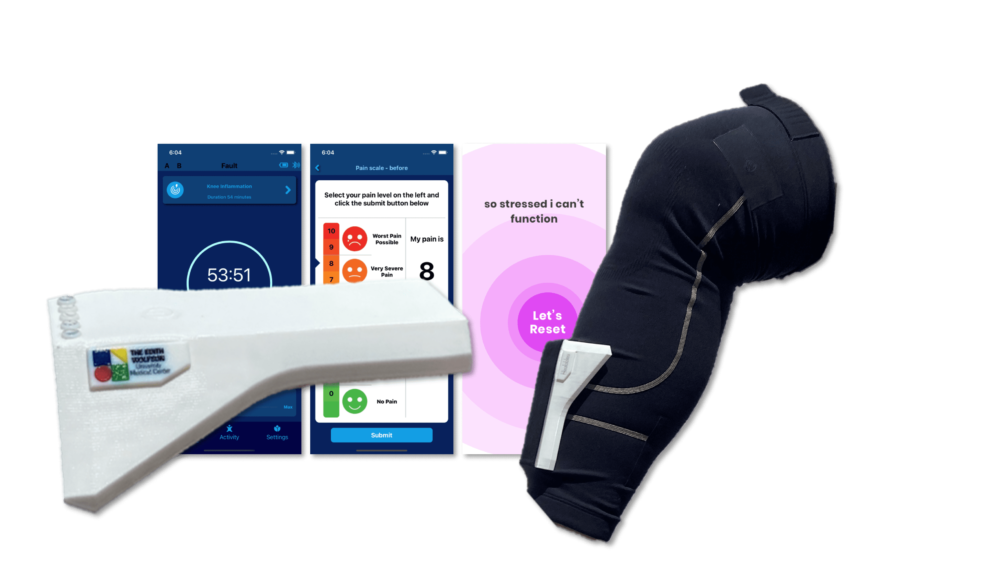 The Healables app-controlled electrotherapy device is being tested at Wolfson University Medical Center on patients with knee osteoarthritis. Photo courtesy of Healables

As for the sports-and-wellness model, Stade Français Paris Rugby Club selected ElectroGear for a pilot through the HYPE Global Sports Accelerator. Healables is recruiting professional sports teams for additional pilots in the US, EU and UK.

The bearded 47-year-old CEO wears traditional garb: white shirt, black pants, black frock coat and black hat. He has rabbinic ordination from a yeshiva in Israel, where he’s lived since 1997.

But he was raised in Baltimore and has a BA in mass communications and user interface/user experience from Towson University. 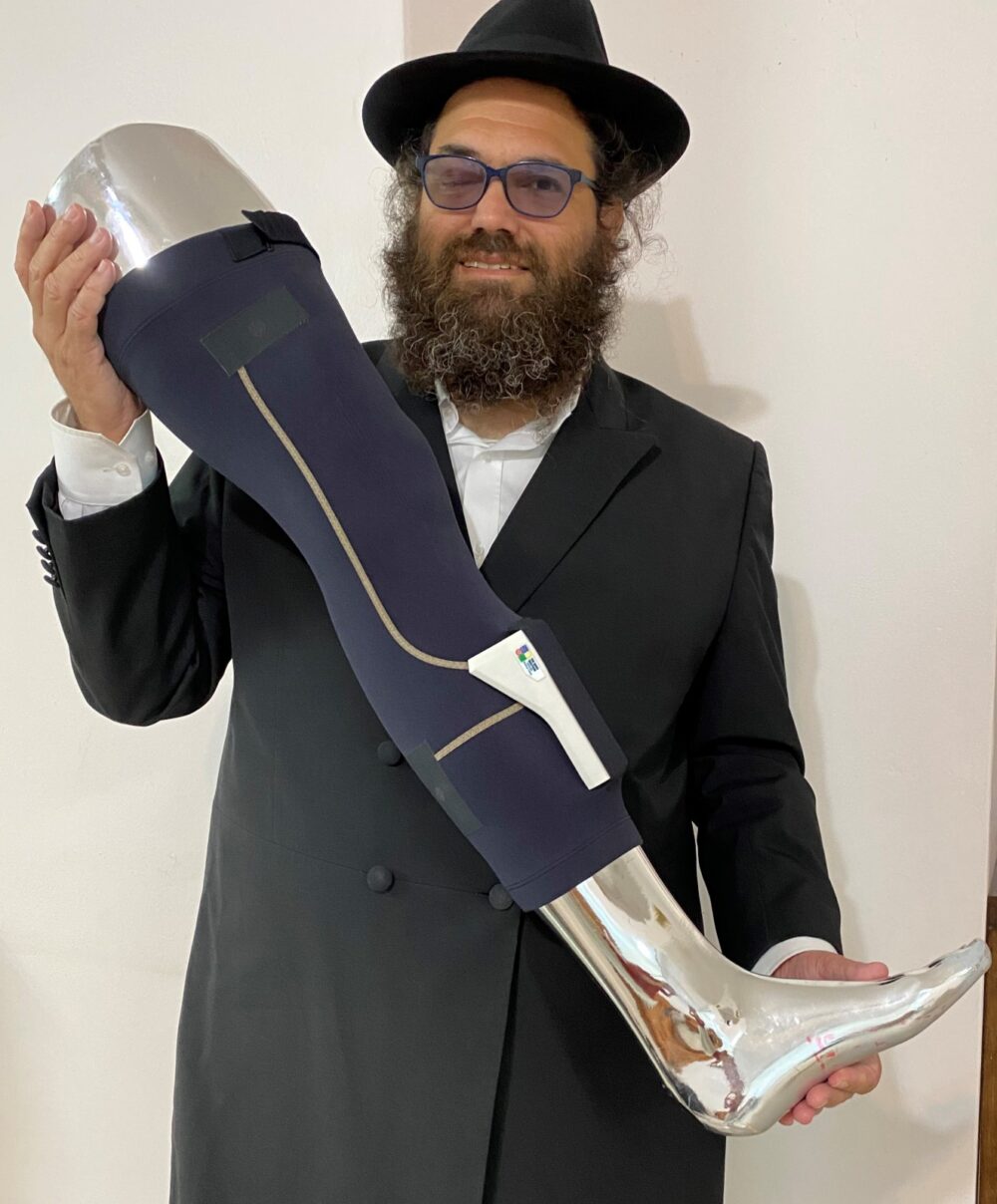 Healables CEO and founder Moshe Lebowitz with the electrotherapy sleeve fitted on a mannequin’s leg. Photo by Abigail Klein Leichman

“I learned that timing is really important in startups,” he says.

Soon after ending that venture in 2007, Lebowitz suffered a traumatic brain injury. During his long recovery, he tried a range of complementary treatments, including Chinese medicine, that helped him heal.

Locating practitioners and traveling to and from sessions was tiring and time-consuming. He pondered how to bring effective treatment modalities into the home through user-friendly connected wearable devices.

The wearables he saw on the market were mostly tracking health parameters rather than treating conditions.

Lebowitz wanted a wearable that could treat the body with electrotherapy and–using data collected from those sessions — treat the mind with personalized behavioral health coaching.

“As a rabbi, I know there’s a body and a soul, and to treat the whole person you have to look at both,” says Lebowitz. “Even on a biological level, the effect of mental health on immunology is something people have really noticed recently with corona.”

In late 2017, Lebowitz founded Healables to realize his vision. He received his first investment in early 2019, a grant from the Israel Innovation Authority.

Healables has raised a total of $2.5 million from the IIA and BioJerusalem and is seeking funding from sports-tech and biotech investors. “We will be collaborating with Leonhardt Ventures as well,” he says.

“Talmud study is about connecting with God, but as a side effect it improves your mental capacity and ability to think creatively. People really respect that.”

After all, he notes, “Startups become unicorns by solving problems differently.”

Studies show microcurrent increases the body’s production of ATP, a compound that fuels many cell processes.

However, three drawbacks have hampered the wide adoption of this electrotherapy, says Lebowitz.

“One, it’s too complicated for many home users and even professionals to feel comfortable with selecting the right settings and it often takes multiple appointments to figure out the appropriate treatment for each patient.

“Two, it’s too restrictive because the patient usually needs to be confined to a treatment table for an hour with sticky electrodes and wires that pop off if you move the wrong way.

“And three, it’s too time consuming because the patient needs to travel to a clinic multiple times a week.” 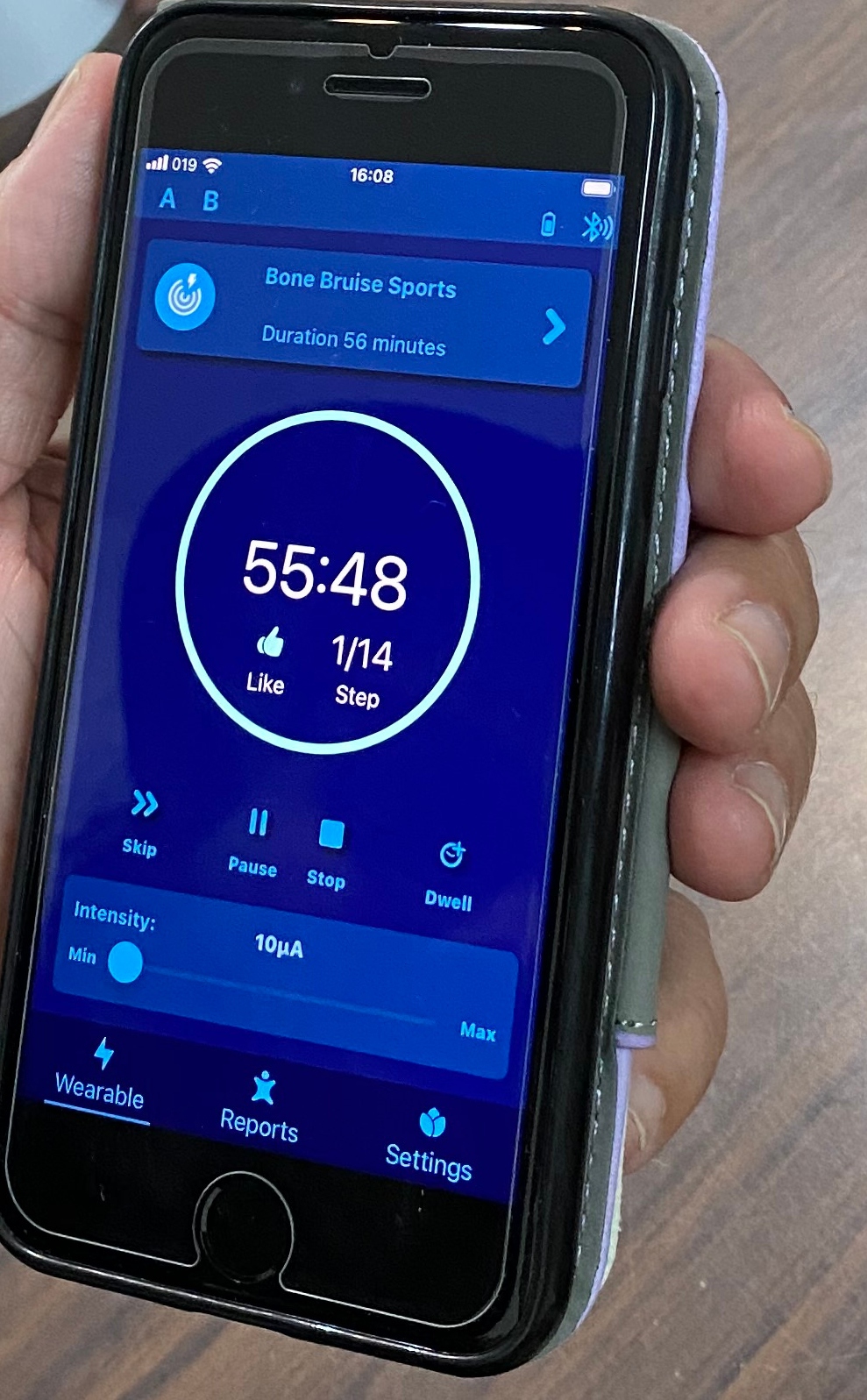 The same device with different settings can treat different conditions.

“Some conditions require half an hour a day, some two hours a day, but you can be doing other things during the treatment. You just press a button on your smartphone and it goes. For an athlete, you can be treating your leg while working out your arms in the gym.”

The Healables system is HIPAA-compliant and includes artificial intelligence for personalizing and improving treatment based on response data. Later, this will also be used to power the behavioral health coaching component.

The company’s chief scientific officer, retired US Army Col. George Lowell, was director of laboratories at Walter Reed Army Institute of Research, former CSO of BioDefense at GlaxoSmithKline Biologicals, and present board member of BiondVax Pharmaceuticals.

Lowell is also Lebowitz’s father. He had Anglicized the family name, and Moshe changed it back to the original after relocating to Israel.

Most of the startup’s crew of 14 are Orthodox or ultra-Orthodox, including Chief Medical Officer Andrew David Shiller, a physician specializing in treating acute and chronic illness and pain. 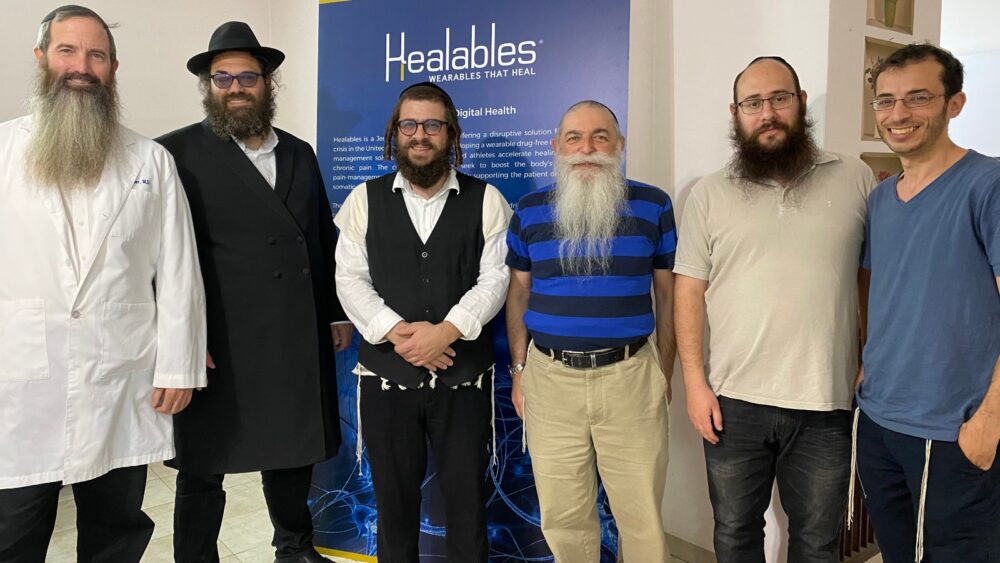 Before moving to Israel in 2015, Shiller saw “some astonishing results” when he started using microcurrent technology in his practice.

He tells ISRAEL21c that before earning his MD at Duke University and doing residencies at Harvard-affiliated hospitals, he studied mechanical engineering at MIT.

“I was always interested in putting engineering together with what I learned about complementary healing, but I never got around to it until I joined this company,” he says.

Inflammation is the fundamental process that drives most chronic illness such as diabetes, autoimmune disease, cardiovascular disease and degenerative brain disease, Shiller explains.

“It’s not about red-hot swelling but about low-grade protein shifts in the blood that don’t always show up in clinical tests. People treated with microcurrent are getting better with their pain but also decreasing pro-inflammatory proteins like the cytokines IL-6 and IL-1. This is a stunning potential gamechanger.”

Shiller told me about results of user testing the sports wearable on several people.

One was a 50-year-old woman with disfiguring osteoarthritis. One ankle was giving her excruciating pain even after surgery and physical therapy.

“We tried the device once and she stopped using crutches. After three sessions she has almost no ankle pain,” Shiller says.

Another tester was a soldier from a special forces unit, sidelined because of knee pain. “He has bone marrow edema associated with chronic trauma, and he was using oxycodone and Celebrex just to sleep at night,” says Shiller.

After one session, he was able to stop taking drugs. “He’d find the pain creep back after a week, so we gave him a device and sleeve to test at home, programmed for him. He’s using it several times a week. I hope at some point he’ll have no pain,” says Shiller.

“Whether they are completely better or not, there is significant improvement and it’s very gratifying to see that with our device.”

Shiller adds that the Healables protocols will be refined with the help of collected data and outcomes of clinical trials.

“Our initial studies are studying two conditions but there’s a whole potential world of treating chronic inflammatory problems with wearable microcurrent electrotherapy, which is kind of thrilling,” he says.

UNCOVER ISRAEL - Get the ISRAEL21c
Weekly Edition free by email
Sign Up Now!
Bring Israel's story to life.
Millions of people around the world rely on us to gain a deeper understanding of Israel. We are the trusted source for original content you won't find anywhere else.
You can make a difference. Donate today to support journalism that brings Israel’s story alive.
SUPPORT ISRAEL21c
Read more on:   Health, Technology, Wearable Technology, Osteoarthritis, sports-tech