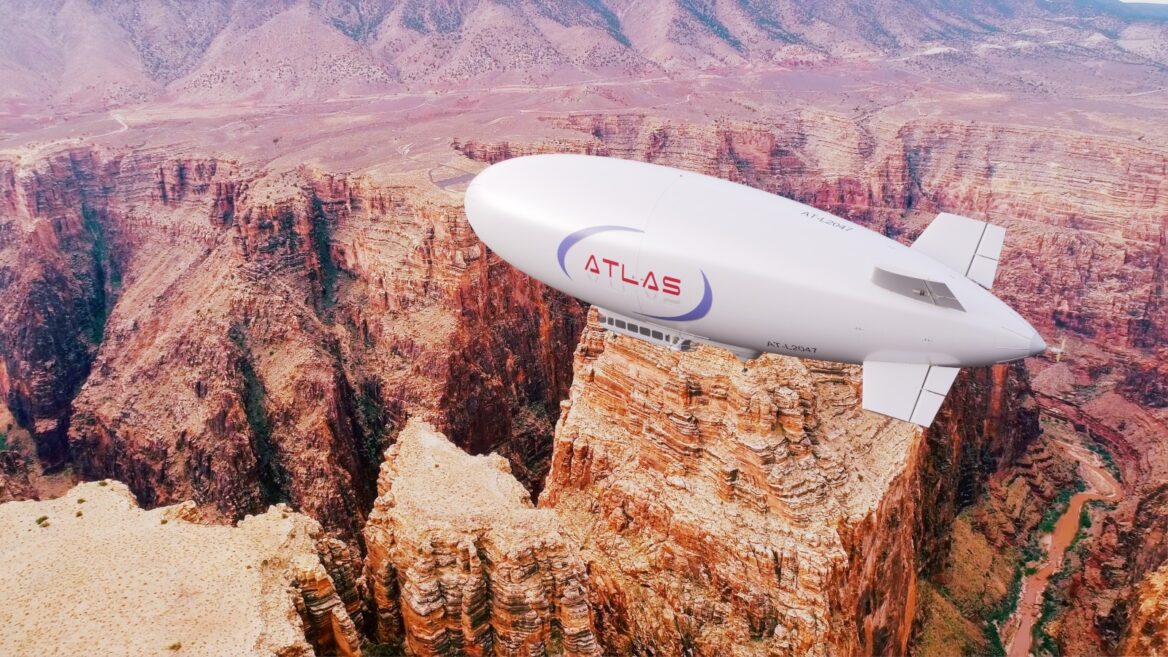 A simulation of an Atlas 11 airship over the Grand Canyon. Image courtesy of Atlas LTA

If Gennadiy Verba, CEO of Atlas LTA has his way, there will be blimps above major tourism sites, blimps ferrying passengers where airplanes cannot land, and blimps bringing large industrial equipment such as wind turbine blades to hard-to-reach inland locations.

They’re “airships” now and, unlike the Hindenburg –which devastated a watching world when it caught on fire in 1937 in a field in New Jersey — modern airships get their lift from helium, a non-flammable gas, rather than the highly combustible hydrogen of yesteryear. 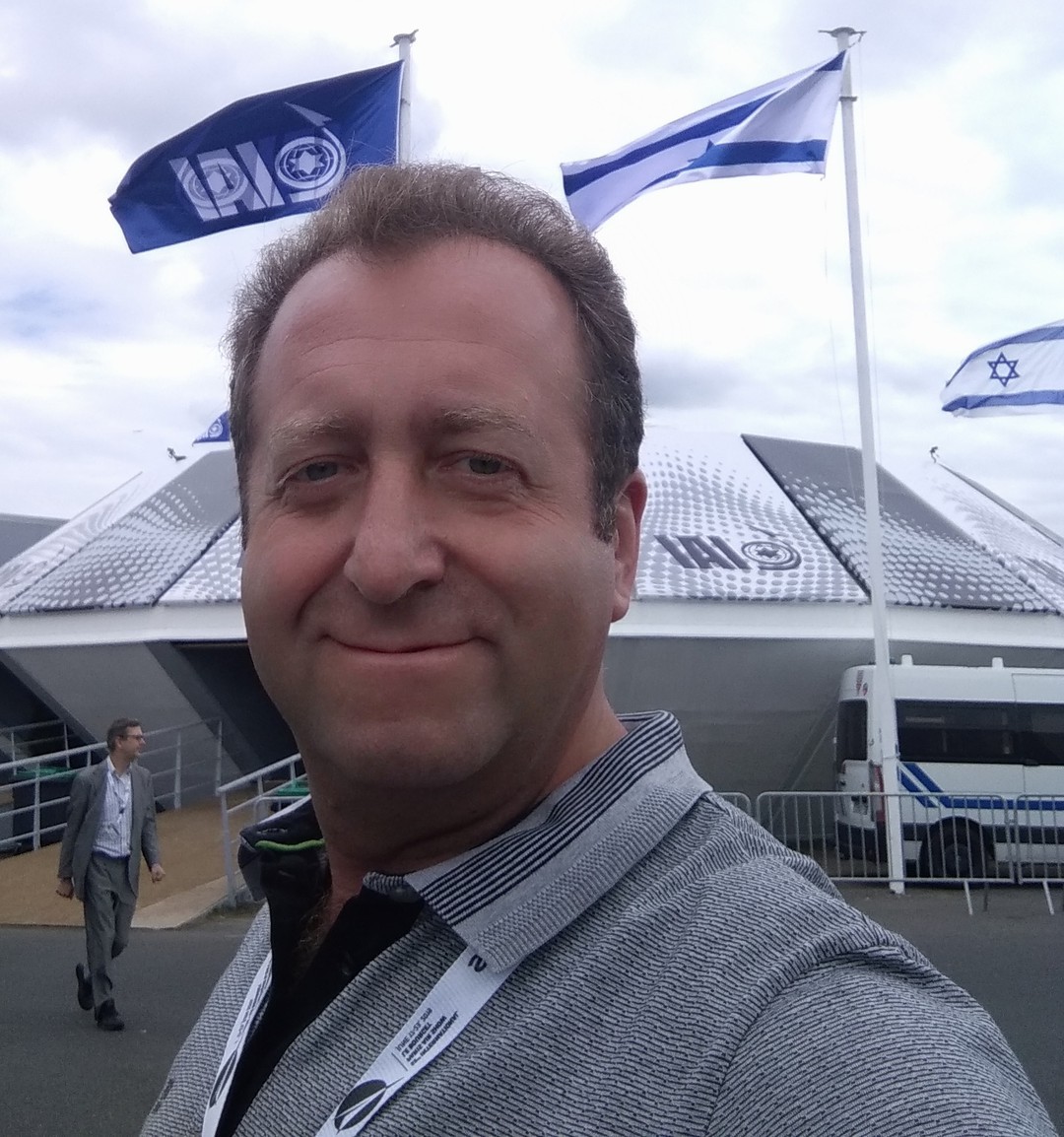 Atlas LTA (the LTA stands for “lighter than air”) began life in Russia, where Verba founded RosAeroSystems some 25 years ago. The company built a variety of airships, tethered aerostats (blimps used for surveillance and security, fastened to the ground with a rope) and high-altitude platforms.

Israel had something Verba needed to take his airships to the next level: expertise in electric propulsion systems – the motors, alternators and power electronics that would bring a century-old technology into the modern age.

So, in 2016, Verba moved the entire operation to Rosh HaAyin, where the company today employs some 20 people.

Atlas LTA still develops – and generates revenue (it had been booking $2.4 million in sales a year until Covid-19 hit) – from its line of unmanned aerostats, used by the military and by communications firms.

But Verba is most excited about the tourism and transportation possibilities of its piloted lighter-than-air vehicles.

Atlas 11 – a luxurious “flying yacht” that will compete with helicopter tours. With floor-to-ceiling windows, comfy seats and enough room to stand up and walk around, the Atlas 11 can hold 17 or 24 passengers, depending on configuration, plus two crewmembers. The smaller Atlas 6 seats eight.

This airship is designed with the motors far from the passengers, resulting in a smooth flight with little vibration – the opposite of a typically noisy touring helicopter. A 40-minute “yacht” flight might cost in the range of $150 to $250 per person, not cheap but less than a helicopter or airplane tour. 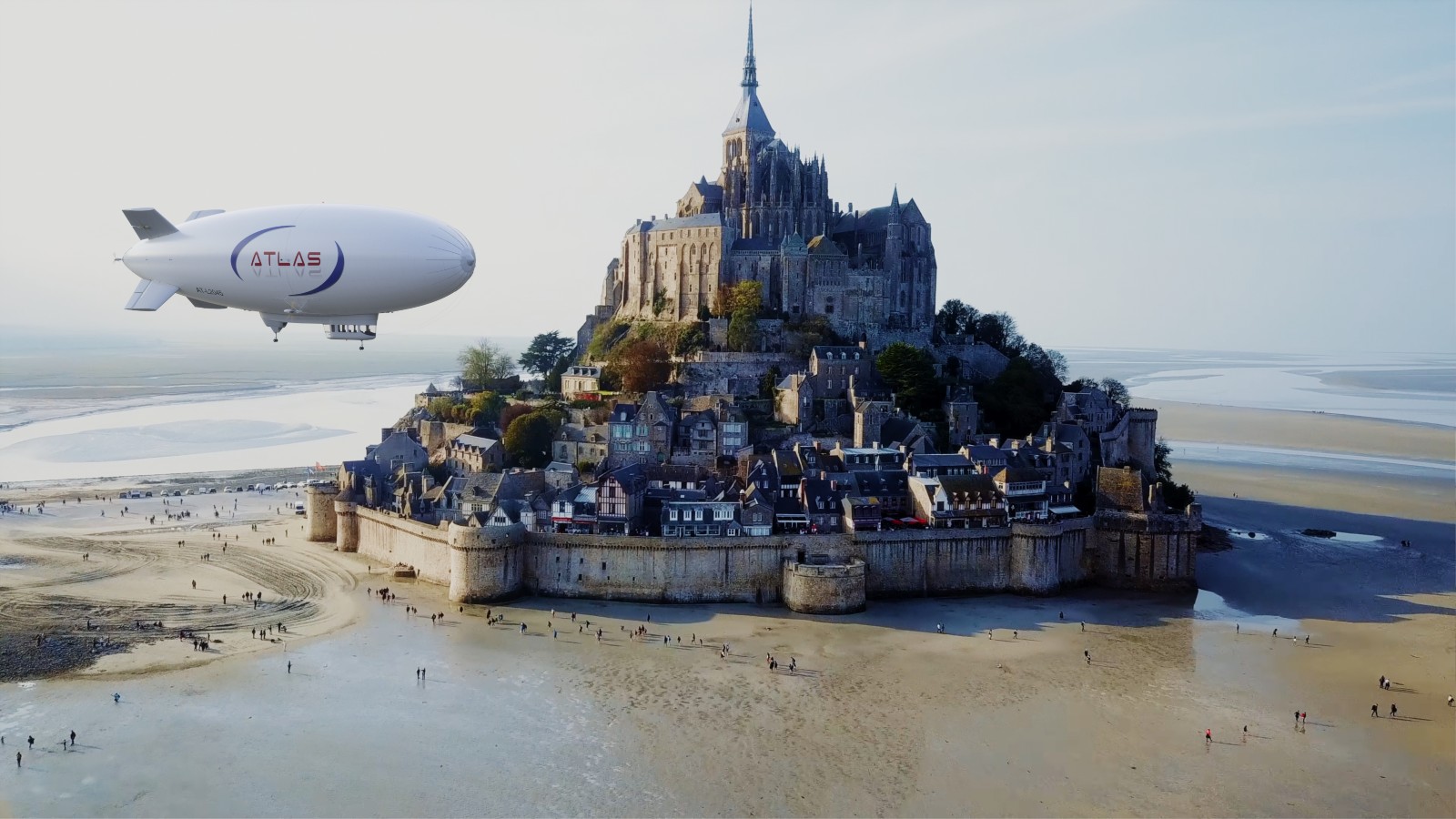 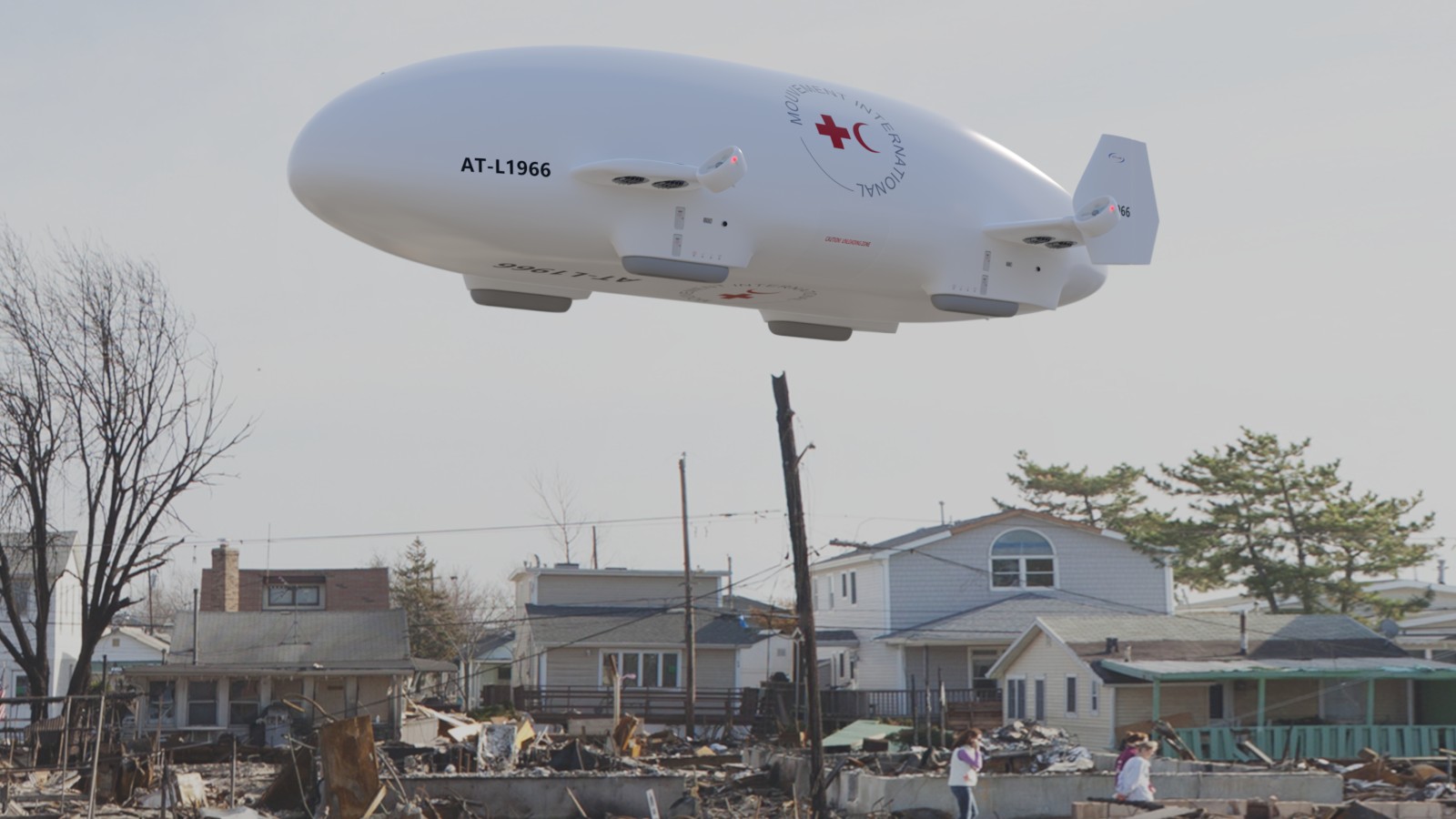 Simulation of an ATLANT cargo airship at a disaster site. Image courtesy of Atlas LTA

The ATLANT combines the best of lighter-than-air technology, the fixed-wing design of a traditional airplane and the rotors of a helicopter, enabling it to fly, take off and land vertically without a landing pad. Its inflated cushion lets it function as a hovercraft over water.

ATLANT is primarily meant for moving oversized and extra-heavy cargo to rural areas where infrastructure (such as roads) is sparse, but it could also ferry up to 200 passengers – for example between islands where an airstrip is out of the question – faster than a sea vessel. 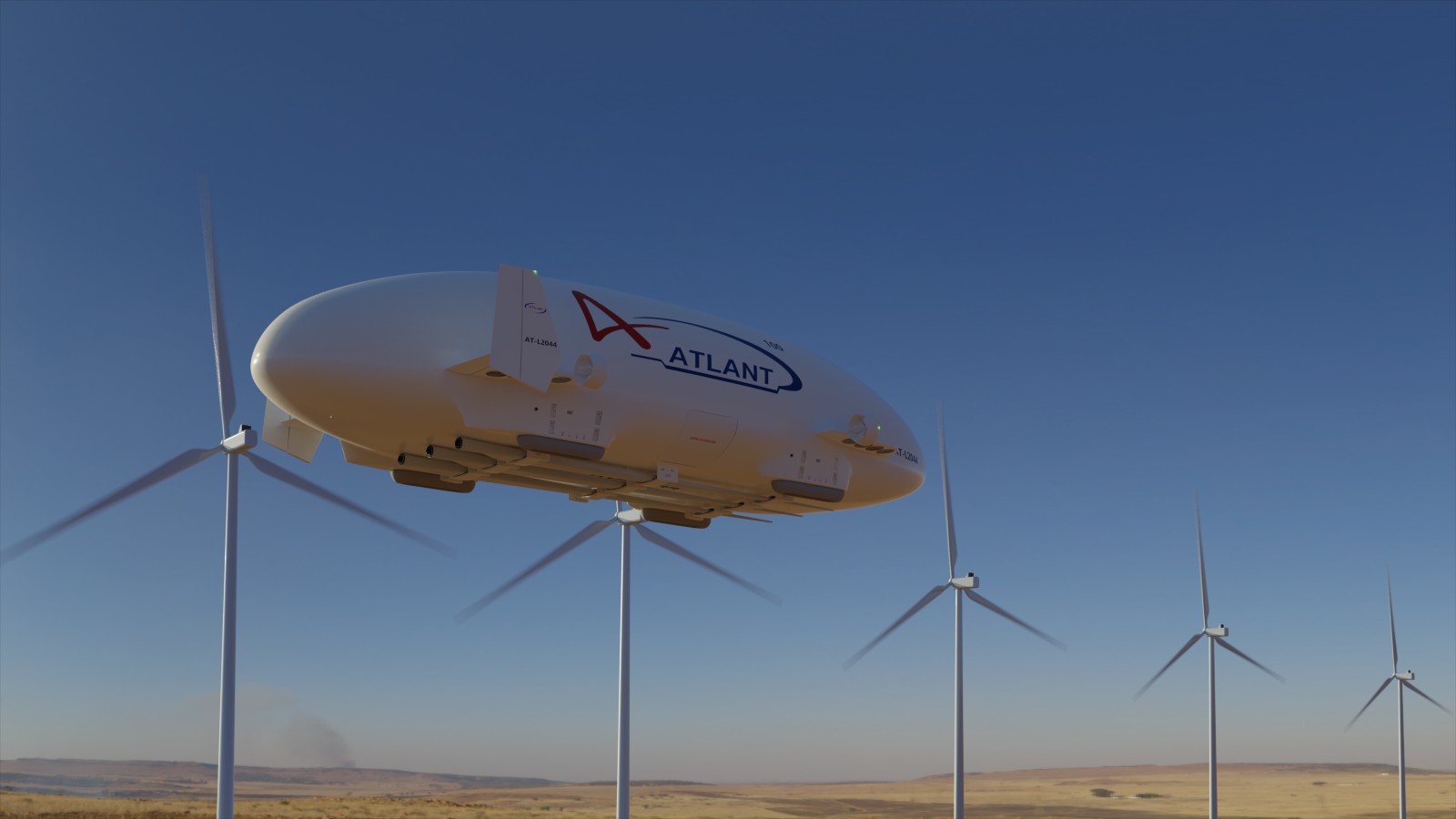 Simulation of an ATLANT cargo airship over a wind farm. Image courtesy of Atlas LTA

SkyLift – this might be the first airship that regular folks use. It’s essentially a balloon-powered elevator that can hold 18 people and that ascends 150 meters (492 feet) in six minutes to give passengers a bird’s-eye view of popular tourist sites.

Before you get too excited, Atlas LTA’s airships are not in operation yet.

“We expect the first flights to be in the next year-and-a-half to two years. Certification from the aviation authorities will take another six to eight months,” Verba tells ISRAEL21c.

Verba hopes that the initial tourism-focused airships will be launched in Israel. He envisions airships floating above the Old City of Jerusalem, although he adds “there are ruins all over the world such as in Peru that can only be seen from above.” 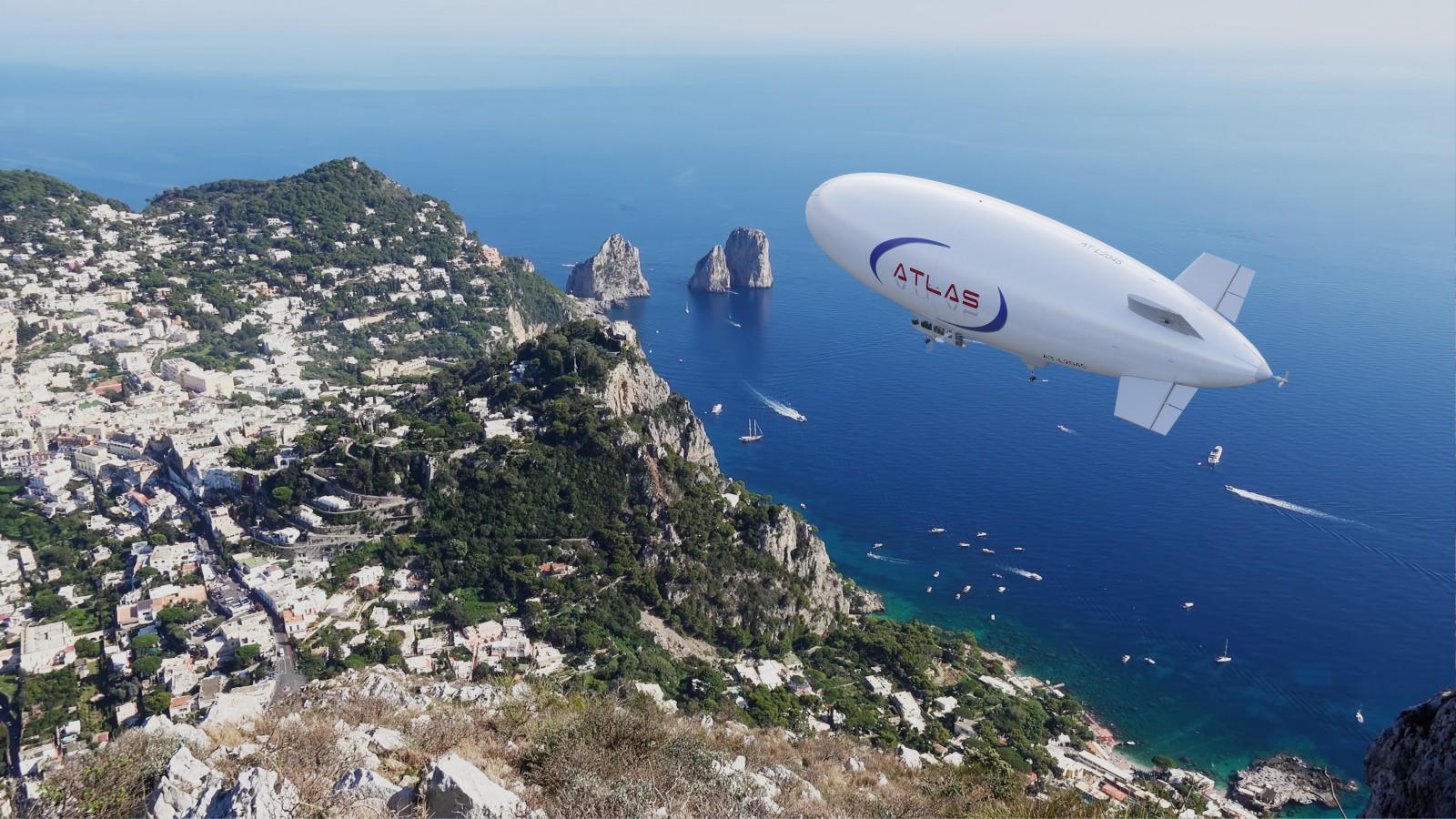 Simulation of an Atlas 11 sightseeing airship over Capri. Image courtesy of Atlas LTA

Tourism airships are not unique to Atlas LTA. A German company, Zeppelin NT, has an airship running above the city of Friedrichshafen. It can carry 14 people. “It’s a very good ship,” Verba says, “but it was designed 25 years ago. It’s not electric and tickets are quite expensive.”

Atlas LTA’s airships will not only have state-of-the-art electric propulsion, they will run on a combination of diesel fuel and hydrogen fuel cells.

Lest anyone worry about a Hindenburg disaster, Verba explains that the hydrogen is stored in a separate chamber inside the helium balloon. “Even if there is a leak – and the probability of that is close to zero – the hydrogen will mix with the helium, making it non-flammable.”

The use of hydrogen fuel cells is also a way of future-proofing the airships as technology moves towards the promise of zero-carbon. When the technology has advanced sufficiently, Atlas LTA “will remove the diesel engine and add additional fuel cells to make the airships 100% hydrogen powered with no emissions.”

“The whole world is now focusing on hydrogen power,” Verba explains. Hydrogen is known as a green fuel – after burning, the only byproduct is water.

In the meantime, hybrid airships already produce 30% to 40% less greenhouse gas emissions than even the most effective airplanes, and five to seven times less than the best heavy helicopters, Verba notes.

Atlas LTA has competition, but it’s not a huge pool. Aside from Zeppelin NT, there’s US-based Lockheed Martin and Aeroscraft, Hybrid Air Vehicles (HAV) in the UK and France’s Flying Whales.

Where might we see Atlas LTA’s airships in the future? Perhaps touring over Antarctica or the North Pole; bringing critical supplies to a hurricane-ravaged region; fighting fires or operating in bad weather in Canada’s Yukon. 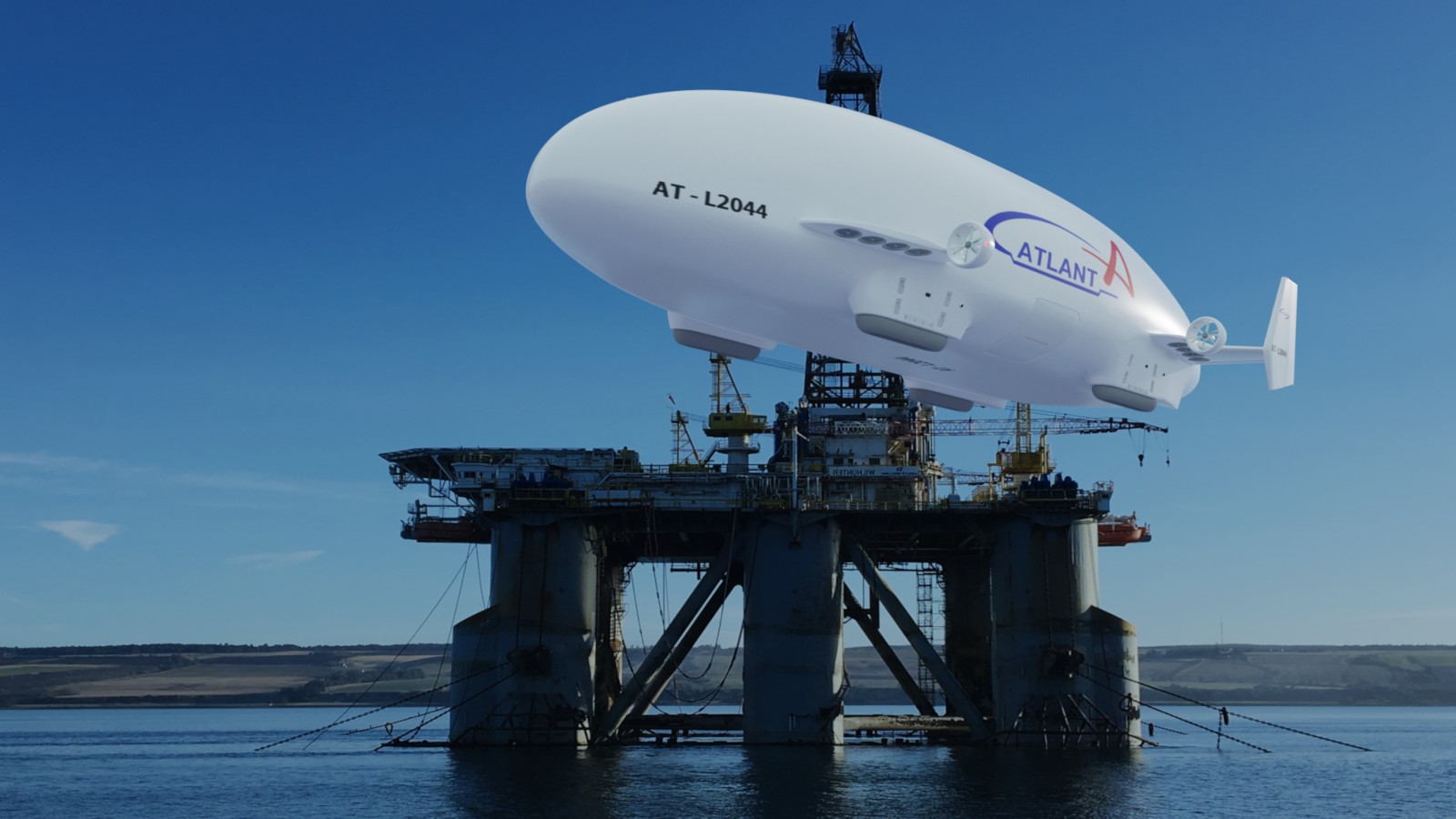 Atlas LTA has a letter of intent with the UN World Food Program on the development of an ATLANT cargo ship to supply food to remote destinations and another LOI with a large wind turbine manufacturer. These two customers alone will use about 20 airships – but first, the company needs to build the craft.

The only other limiting factor for a booming airship future is the quantity of helium in the natural world. The element is becoming scarce and even the price of helium balloons used at birthday parties has shot up in recent years.

“There are several deposits of natural gas in the world that are rich in helium,” he says. “The equipment to extract helium today is quite expensive. But once people start to build helium plants, more will be available in the market. I hope then that the price will go down and supply will go up.”

For more information on the airships in your future, click here.