A little shop called Botanica recently opened under a geodesic dome at Jerusalem’s new shopping/dining/cultural complex, The First Station. If you walk in to buy a plant or register for an urban gardening workshop, you won’t be able to tell which of the employees is a client of Shaf Yativ, a non-profit that innovates new ways to integrate people with mental illness into society.

Botanica is a social business, explains Shaf Yativ co-founder Rabbi Guy Avihod, a 38-year-old father of five. Over the course of a year, he expects that 70 or 80 clients will gain valuable work experience in this eco-venture.

“Botanica will be a place where they can work for six to nine months as part of the staff,” Avihod tells ISRAEL21c. “It will be their opportunity to learn about themselves and learn social and work skills. Afterward, we can help them get into regular jobs.”

About 10 Shaf Yativ clients work in the complex’s many cafés and shops, but Botanica is the only one established especially for them.

Chef Nir Tzuk, co-owner of the Culinary Bazaar farmers market at The First Station, employs some of these clients. After Avihod met him through his partnership with the Jerusalem Botanical Gardens, Tzuk donated space for the social business and offered to host community activities.

“He has a great heart,” says Avihod of Tzuk. “The Culinary Bazaar charges us only for utilities and gave us a wonderful place to be — where things live, not where things are hidden. This is a dream come true.”

Unlike a sheltered workshop, a retail social business provides opportunities to interact with the public. A similar project to Botanica is Café Motek on the campus of northern Israel’s Tel Hai College, where local residents with psychiatric disabilities are among the paid staff and the clientele.

Managed by young Jerusalemite Amos Zruk, Botanica is a transitional employment training center as well as a hub for community integration using eco-therapeutic activities such as plantings and recycled art projects. 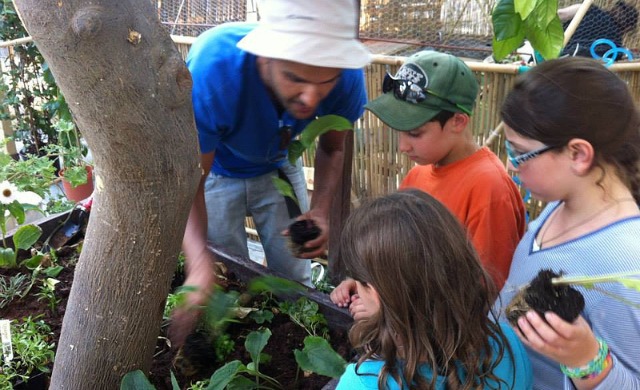 Avihod plans eventually to develop an ecological center for community mental health. “Studies around the world have linked mental health and wellness to ‘green activities’ and connection to nature,” he explains.

The Jewish National Fund of Australia is working with Shaf Yativ on using environmental awareness as a therapeutic tool. The match between them was made by Ra’anana-based social entrepreneur Elie Lederman. On a trip to his native Australia, Lederman and Avihod met with the Social Firms of Australia to learn how to build a self-supporting social business.

“When the opportunity arose to create a social business in The First Station, we thought it was a convergence of all these experiences that are coming to fruition in this new venture,” Lederman tells ISRAEL21c.

The Jerusalem Botanical Gardens provides unique specialty plants to the shop, in addition to instructors for hands-on activities for groups of students and working people. Shaf Yativ also has a working relationship with the Robert H. Smith Faculty of Agriculture, Food and Environment at The Hebrew University of Jerusalem.

“Tomorrow we have planting-recycling workshop for kids,” says Avihod. “We will take old egg crates, plant seeds in them and put the whole crate into the ground, where it breaks down and feeds the plant. My vision is for people to touch the environment and feel connected with the soil.”

Botanica’s $150,000 first-year budget is not yet fully in place, but Avihod has faith that additional donors will steer it into safe waters.

“So many times, social businesses fail because they can’t deal with the first waves that crash them down,” he says. “They need somebody to push them past the first line of waves, and that’s where seed money comes in.”

Healing within context of own culture 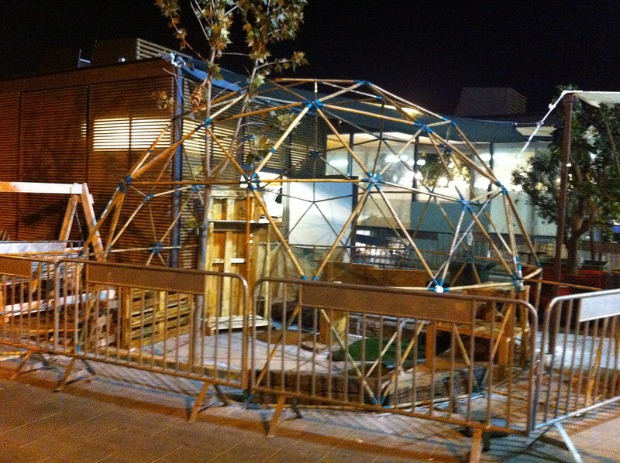 Botanica’s geodesic dome under construction at The First Station.

“It’s an innovative venture that uses a short-term learning structure to help people discover their strengths and then go on to community integration in study or work,” says Avihod, a teacher who is earning his doctorate in social work at the Hebrew University of Jerusalem. “We hope to find ways of giving people rehabilitation choices within their culture, because to get better, they have to do it within the context of their culture.”

Two years ago, Avihod and co-founder Udi Marili — an expert in the field of rehabilitation for individuals with psychiatric disabilities — spoke about this program at a Boston meeting of the US Psychiatric Rehabilitation Association. “They were very impressed with the idea of taking something that has been around for thousands of years and applying rehabilitation to it,” says Avihod.

Shaf Yativ is supported by Israel’s Ministry of Health and National Insurance Institute, which also refer clients. The Harry and Jeanette Weinberg Foundation donated $200,000 for two years toward the organization’s supported employment program.

“About half our funding comes from the government, and they are very enthusiastic about our work,” says Avihod. “Taking people out of institutions and fulltime care saves the government millions of shekels. We’ve had students with over two months of hospitalizations per year and now they go without hospitalization entirely.”

“It was amazing. For many of them, it was the first time they saw anything grow,” says Avihod. “That very primal connection is what I want to bring to Botanica — for people with mental illness and for the general public.”