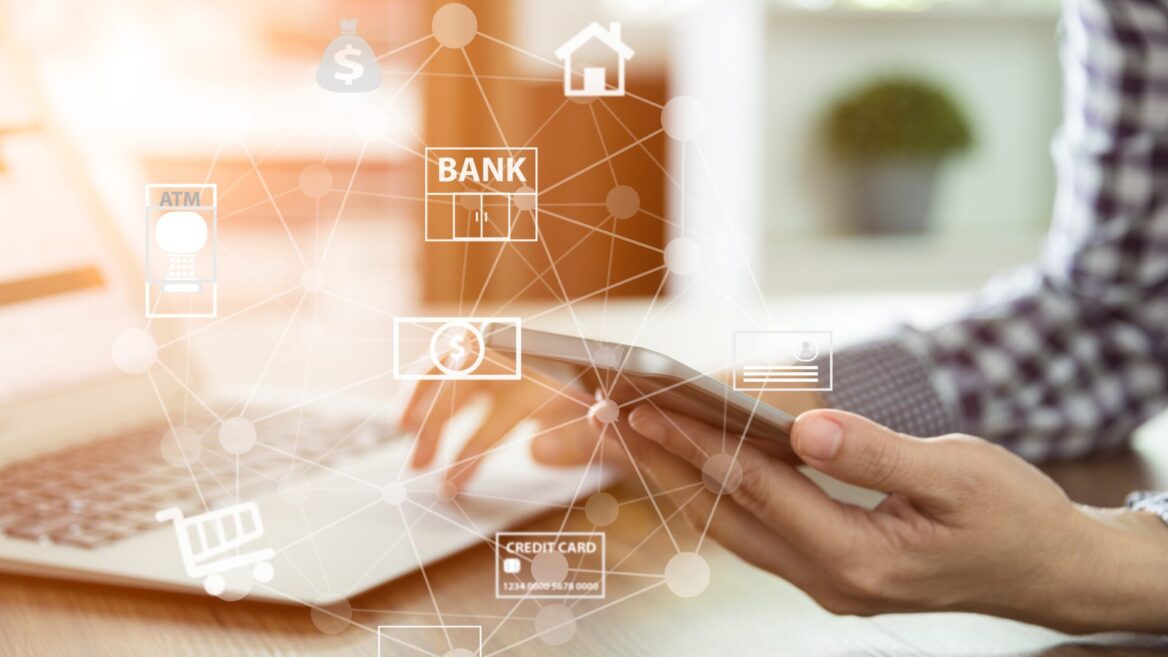 Image by MK photograp55 via Shutterstock.com

Shawn Melamed’s home office is filled with high-tech equipment – computers, microphones, cameras for Zoom. But the most visible keyboard is not connected to his laptop. It’s a full-sized one meant for making music.

Melamed, who cofounded and serves as CEO of Spiral,  a startup combining digital banking with doing good, is equally at home in corporate boardrooms and dance clubs, where he creates electronic music as a DJ and producer. He performs under the funky name “Alchemist Spider.” 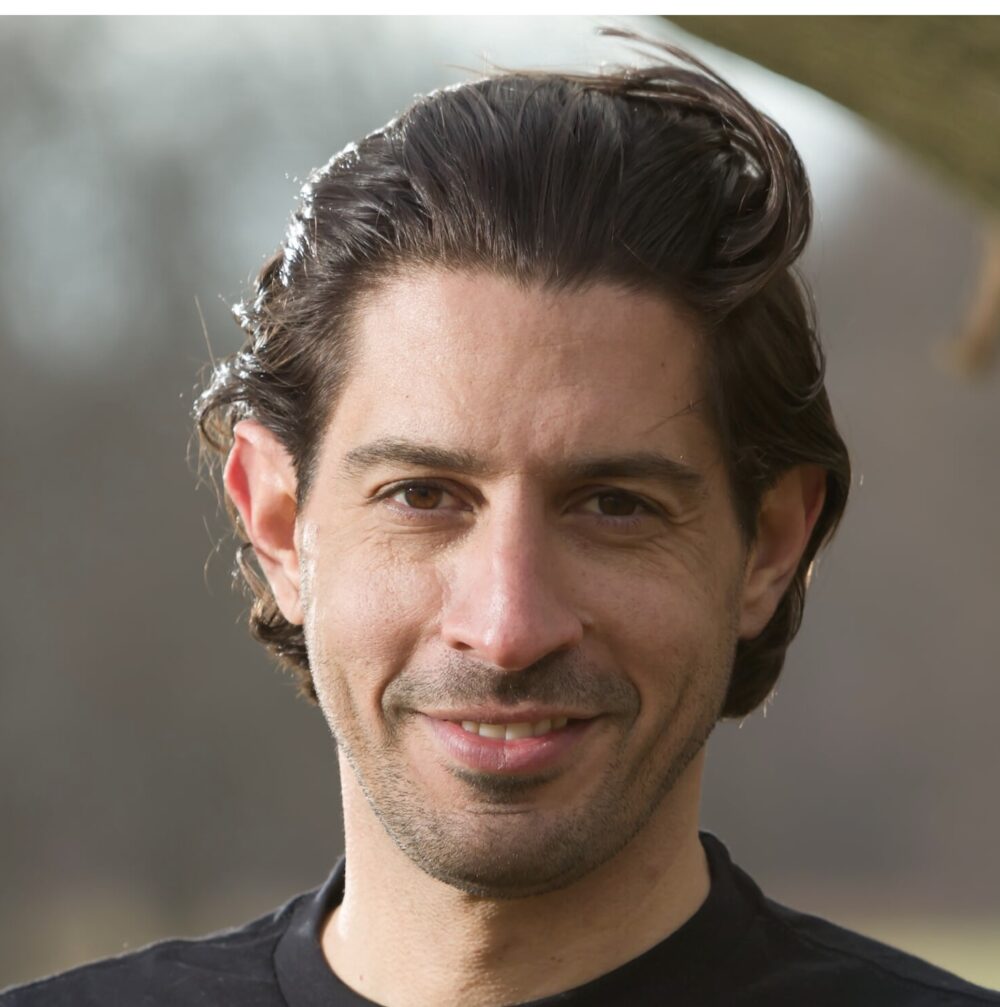 “I like connecting people from all walks of life. You connect people through music. Spiral is also trying help people feel connected, to make the world a better place by being more socially responsible,” Melamed tells ISRAEL21c.

“I love doing both music and tech. If I did just one all day, I’d get bored!”

Spiral is a “neobank,” an independent financial institution that piggybacks on a more established one.

If you bank with Spiral, you’ll see Spiral’s branding. But your deposits are held by the other completely regulated bank, with FDIC insurance protecting up to $250,000 of your savings.

Neobanks are online only. That’s fine with most customers, Melamed says, who are nowadays used to doing everything on their phones and would rather not spend any more time than they have to in a brick-and-mortar building.

There’s a second trend fueling the rise of the neobanks, Melamed explains.

“Historically, you had a relationship with your bank’s branch manager. The bank might support the local 5K run. Then, small banks started consolidating to become these behemoth banks. They lost touch completely with their customers. These two trends created a very fertile ground for disruption.”

As of September 2021, there were 246 neobanks around the world. Among them: Chime, now with 15 million US customers and a valuation of $25 billion; and Revolut, an all-European digital bank, valued at $33 billion. Israel has one too: First Digital, established by Mobileye founder Amnon Shashua.

Seeking a way to differentiate Spiral, Melamed came up with the idea of combining banking with charitable giving.

The Spiral mobile app looks like other online banking tools – there’s your daily balance and your most recent transactions.

But if you’d like to give to a charity or charities, the app enables you to allocate a certain percentage from what you earn, or send a one-off donation, to a specific organization. 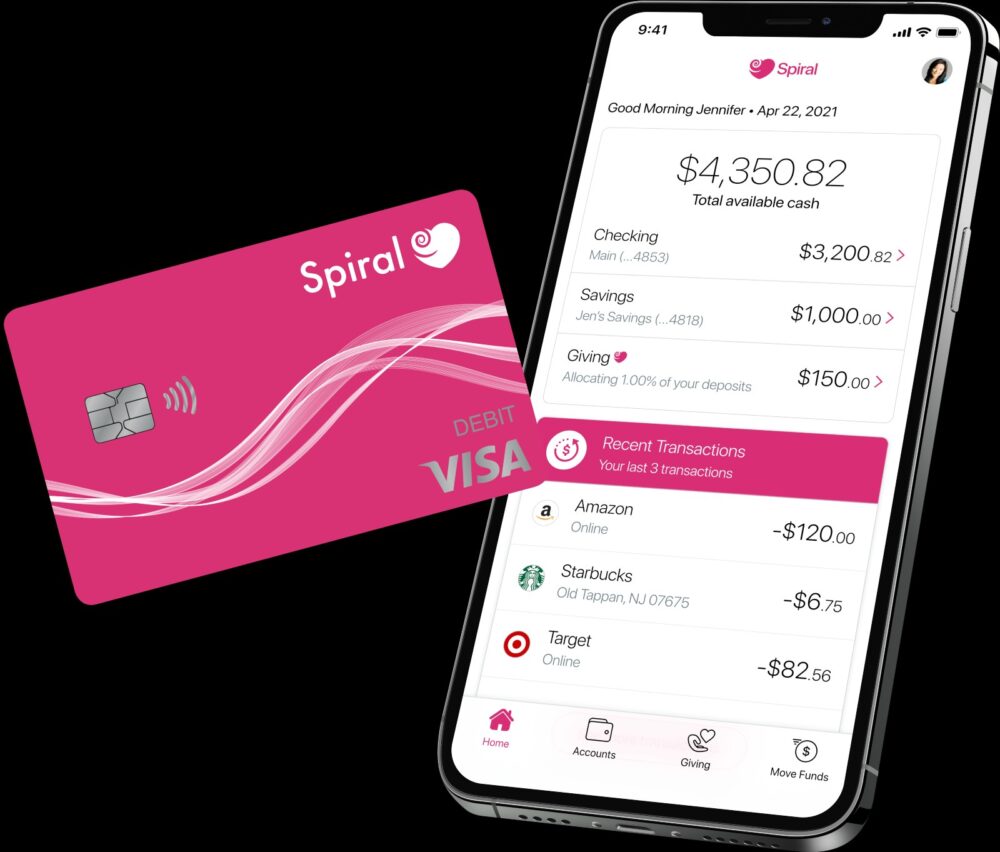 There are some 1.5 million nonprofit charities in the United States, all searchable from within the Spiral app.

“Who would you like to give to?” Melamed asks me.

I think for a second. “The Pardes Institute of Jewish Studies in Jerusalem,” I tell him. It’s where my wife and I met.

Melamed does a quick search and Pardes pops up right away. He picks an amount – $5 – taps send, and Pardes is now a few dollars richer.

Spiral will mail a check to Pardes, along with a colorful note indicating that if Pardes chooses to become an official partner charity, Spiral can make direct deposits into its bank account. Pardes will also be able to post videos and other content on the app so that Spiral customers can see how their money would be used.

Spiral has 100 partner charities, including United Way, American Friends of Hebrew University, Earthday, Rainforest Trust and the United Nations and Eden Reforestation. Any charity with a 501c3 designation in the US is eligible.

Spiral issues a summary report whenever you like. It’s especially helpful at tax time, showing exactly where you donated in the last year and the total amount.

Spiral also has a one-to-one matching program up to $150, so that $5 Melamed just donated to Pardes became $10. 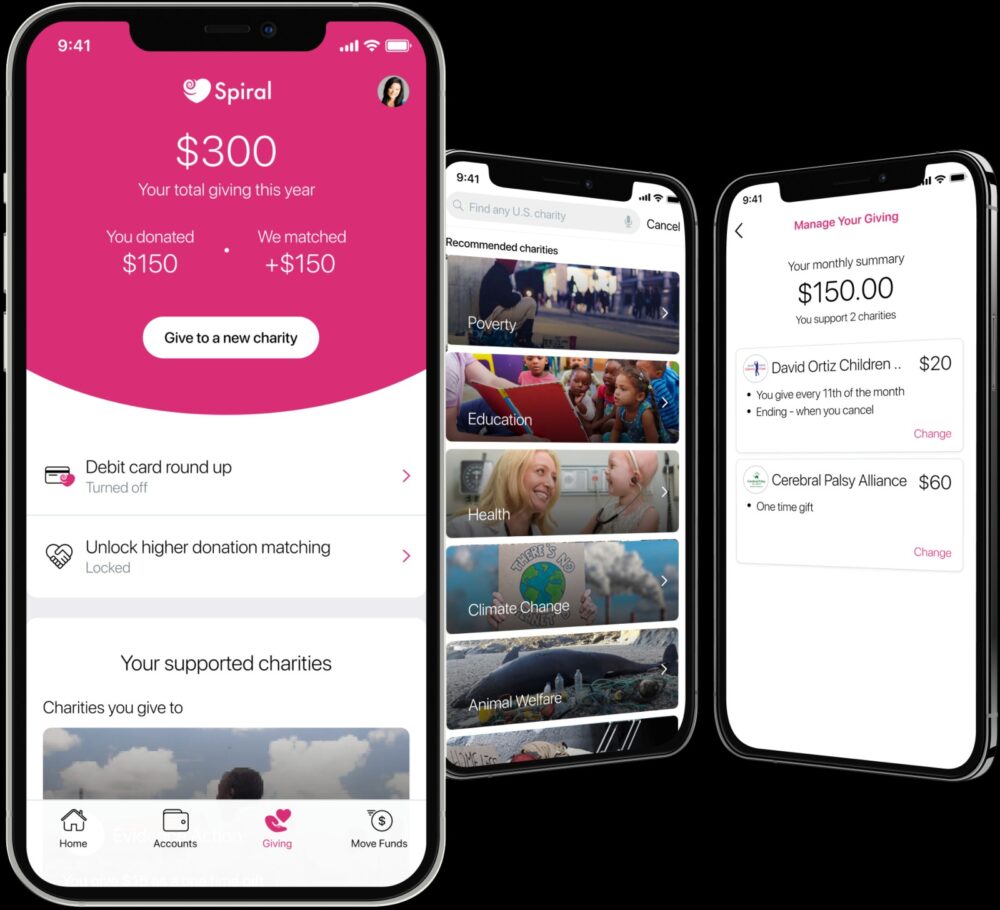 Spiral matches your charitable contributions up to $150. Screenshots courtesy of Spiral

The most generous nation

How does Spiral afford all those goodies? That’s part of the magic of the banking business: Banks take your deposited money and reinvest it in other assets, generating revenue or doling it out as a loan with interest.

That allows Spiral to make and match donations. Charities don’t pay to be a part of the Spiral system.

Spiral was founded by two Israelis – Melamed and his cofounder, president and chief marketing officer Dan Blumenfeld – but set up shop in New York to be closer to its main market.

“The US is called ‘the most generous nation,’” Melamed tells ISRAEL21c. “Six out of 10 households donate to charities. It comes out to about $470 billion a year.”

Spiral will focus on the US for the next four to five years, Melamed says. Europe will come next. “In 10 years,” says Melamed, “people will look for a cohesive banking experience regardless of their location.”

In other words, you won’t necessarily pick a bank where you live but the best bank for your needs.

Melamed is taking the same global approach to staffing Spiral. The company closed a funding round of $14 million just before the Covid-19 pandemic shut down much of the world.

“We had an office for only about two months,” Melamed says. He has no intention of opening a physical office again – just like his neobank.

“More people are becoming global digital nomads,” Melamed notes. They can work anywhere. “We have Israelis who moved to the US, we have employees in Mexico, Portugal and Costa Rica.”

Melamed was raised in Mevaseret Zion, a suburb of Jerusalem. He started his first company, Correlix, in Israel, before moving with it to the US in 2008. Correlix was acquired by TS-Associates in 2012.

Melamed then joined 60,0000-employee Wall Street company Morgan Stanley, which was looking for an entrepreneur to run business development.

“I thought I’d do it for a year or two, but I really liked it. I had a senior role and was working closely with the COO, who is now on the board of Spiral.”

Melamed became the head of Morgan Stanley’s innovation office. “It was a great opportunity to learn how to innovate at scale,” he says.

After five years, the entrepreneurial spirit came calling again and he decided to create “a bank with a heart – something to guide people to live a better life.”

Spiral launched to the public just three months ago and is closing in on 5,000 customers. Melamed says customers can earn up to 15 times more on their savings than at the average bank.

Most users donate small amounts to charity, although a few give in the thousands of dollars.

“It’s a long-term journey,” he stresses. “We’re not building a startup to sell in three years. We’re trying to create a company that will last for 20 years with tens of millions of customers.”

What’s next for Spiral? Credit cards, personal loans and mortgages, Melamed says, all while continuing with matching donations and giving cash bonuses to customers of up to $126 a year.

Paradoxically, perhaps, the Covid-19 crisis didn’t dry up donations. In fact, donations in 2020 grew by 13 percent, Melamed says. “A lot of people and a lot of causes needed help, so people donated more.”

Spiral is not the only Israeli-founded financial services firm that gives back – high-flying insurance company Lemonade pledges that if there is any money left between the premiums you pay and claims that needed to be paid out, Lemonade will donate it to a worthy cause.

Now that “New York is waking up and going back to work,” Melamed says, there could be more money earned, more donations and even more opportunities to engage his other passion: making music while Spiral makes money for its neobank customers.

In North America, you can get a Spiral account here

UNCOVER ISRAEL - Get the ISRAEL21c
Weekly Edition free by email
Sign Up Now!
Bring Israel's story to life.
Millions of people around the world rely on us to gain a deeper understanding of Israel. We are the trusted source for original content you won't find anywhere else.
You can make a difference. Donate today to support journalism that brings Israel’s story alive.
SUPPORT ISRAEL21c
Read more on:   Technology, Business, Social Business, Banking, Spiral