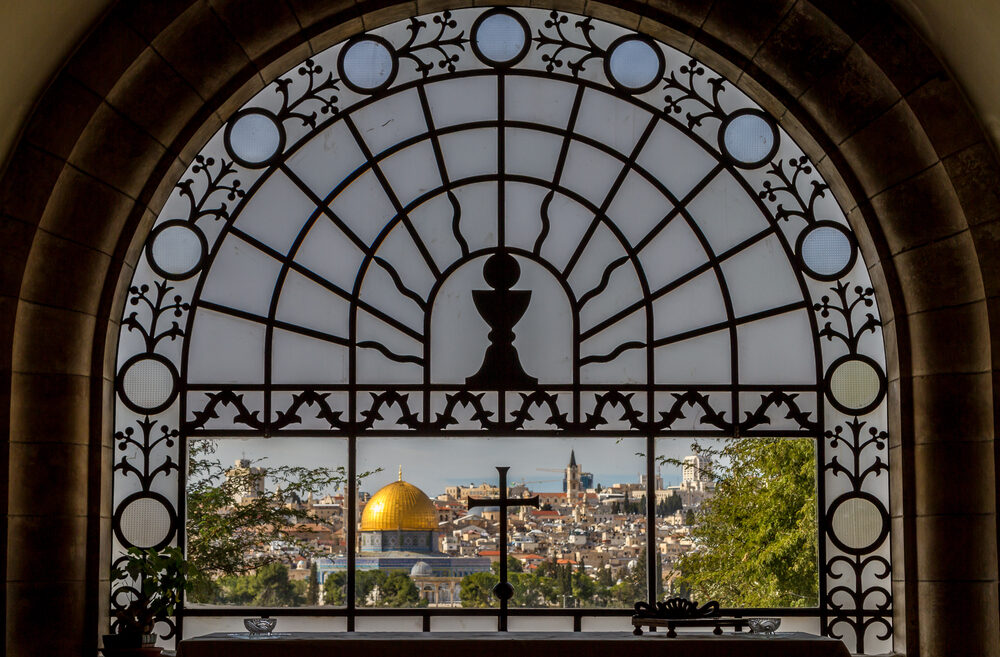 View of the Dome of the Rock from a window of Dominus Flevit Church in Jerusalem. Photo via Shutterstock.co

Israel is filled with churches. After all, this holy land is where everything you read about in the Bible took place.

Sure, you’ve got to check out the most famous of them all: The gold-domed Church of Mary Magdalene and Church of the Holy Sepulcher in Jerusalem, and the Church of the Nativity in Bethlehem, for example.

Just as historically significant and breathtakingly beautiful, the churches and monasteries on this list house many a historical tale, including ancient ruins, tombs of famous saints and apostles, and medieval artwork that is hard to believe remains to this day.

Some are in fairytale locations with some of the best views in Israel, from the heart of the desert to mountaintops overlooking Israel’s seas. Others warrant stripping down to your bathing suit for a quick spiritual dip. Read on and you’ll find out just exactly what we mean on this one! 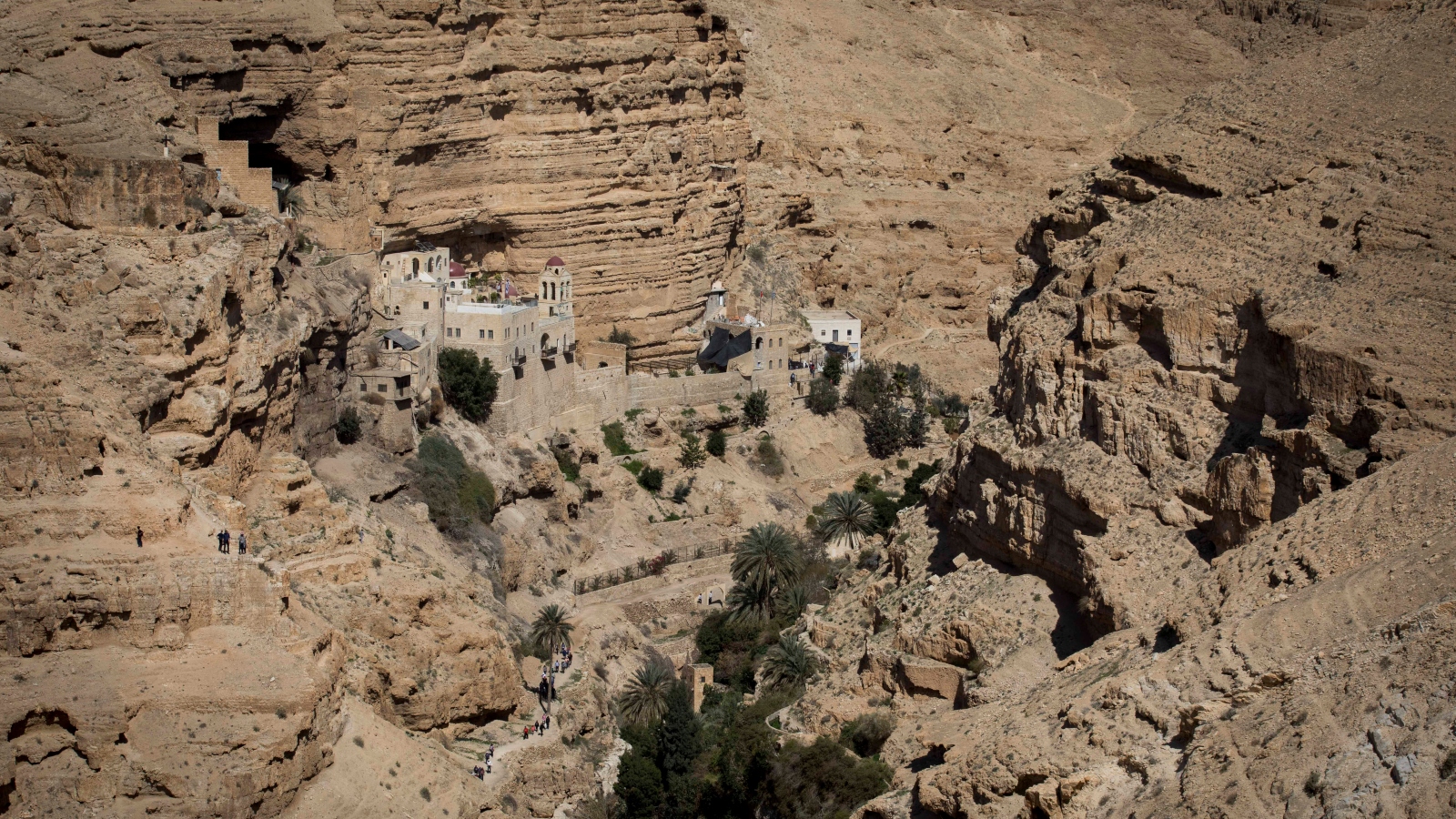 View of the St. George Monastery in the Judean desert near Jericho. Photo by Nati Shohat/Flash90

In the fourth century CE, Byzantine monks retreated to the Judean desert to live a simpler, more remote life.

During that time, more than 60 monasteries were built into the Judean desert landscape. While many were destroyed by invaders and a large 19th century earthquake, a handful remain active today.

Possibly one of the most beautiful examples is St. George Monastery, a Greek Orthodox monastery built seamlessly into the side of the rocky mountain canyon at Wadi Qelt, a popular hiking spot.

With a complicated history dating back to the fourth century, the monastery sits parallel to the ancient road to Jericho referenced in Jesus’ Good Samaritan parable, and is said to be the setting of the “Valley of the Shadow of Death” from Psalm 23. 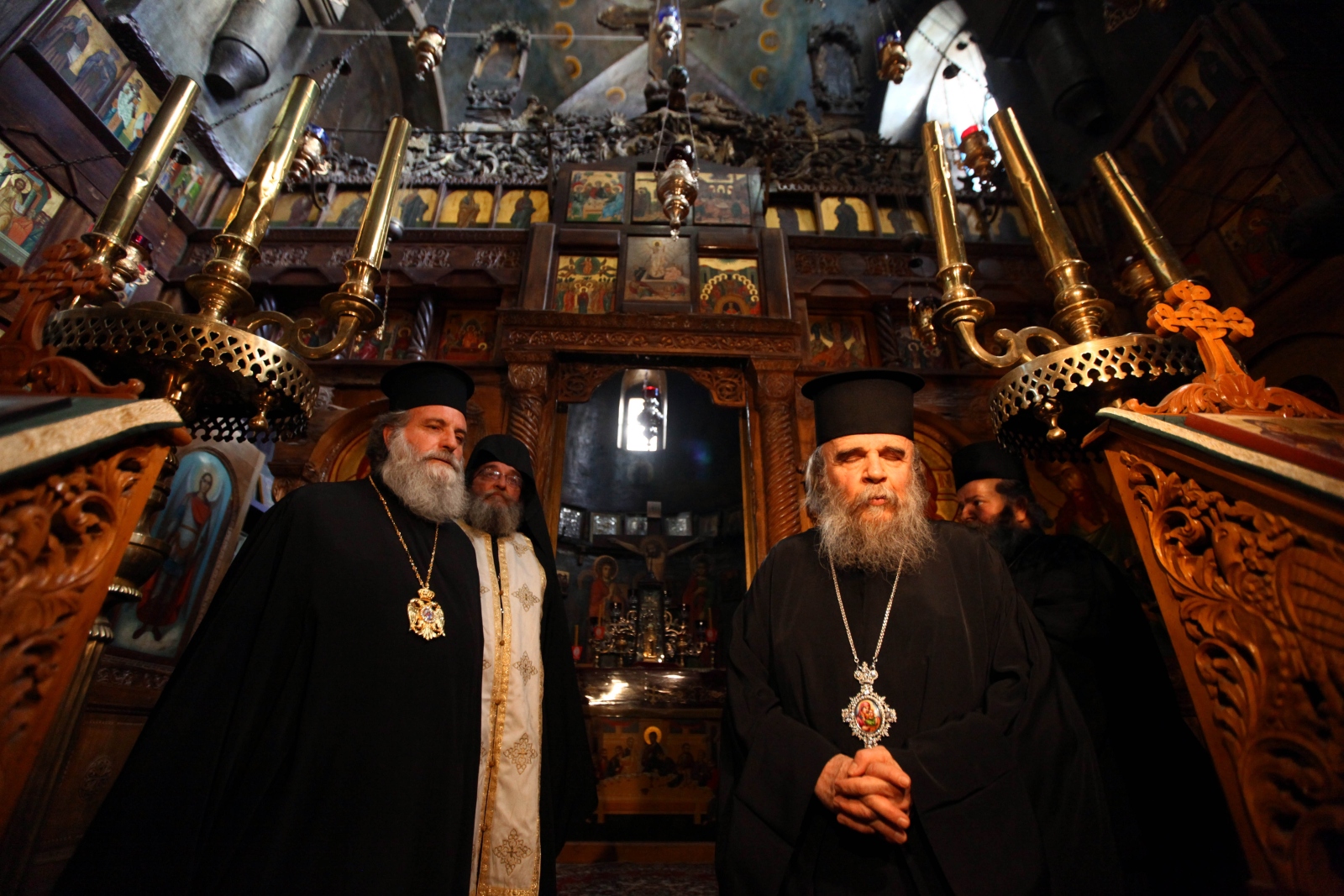 Christian monks maintain their ancient way of life in the St. George Monastery on a cliff in Wadi Qelt. Photo by Abir Sultan/Flash90

What to know before visiting: Wear your walking shoes. The buildings of the monastery can only be reached on foot via a 10-15 minute hike. Visiting hours: Monday-Saturday 9am-1pm. 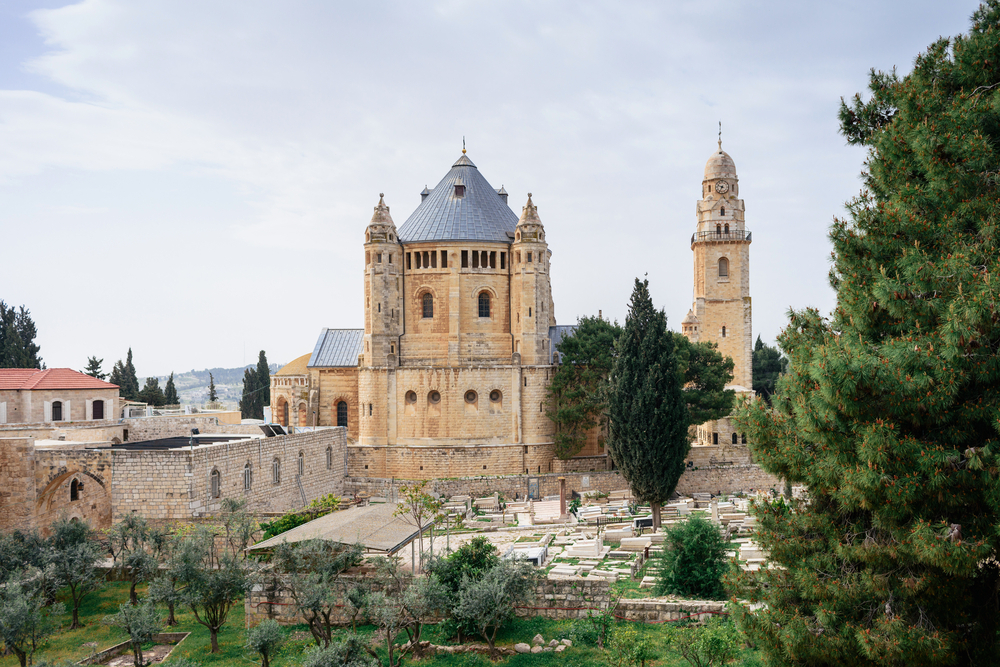 Tucked away in the less treaded Armenian Quarter of Jerusalem’s Old City is St. James Cathedral.

The Armenian Orthodox church where Kim Kardashian and Kanye West had daughter North baptized on the family’s reality TV show, this 12th century walled-in marvel on a large chunk of the Old City’s coveted real estate was established in honor of two different St. James: Jesus’ apostle and Jesus’ relative who was Jerusalem’s first head bishop.

One of Israel’s only fully intact Crusader-era churches, it houses an astonishing number of gilded alters and chapels, each with palpable ties to history, such as one that houses a cross owned by Constantine the Great’s mother Helena.

The church is also the site of 130 religious paintings; magnificent skylights; carved stone crosses; giant pillars; elaborate chandeliers; ancient frescos; 18th century blue and white Armenian tiles; an 18-meter-tall dome ceiling; and a beautifully adorned burial vault where the Virgin Mary is said to have laid the head of the Apostle St. James. 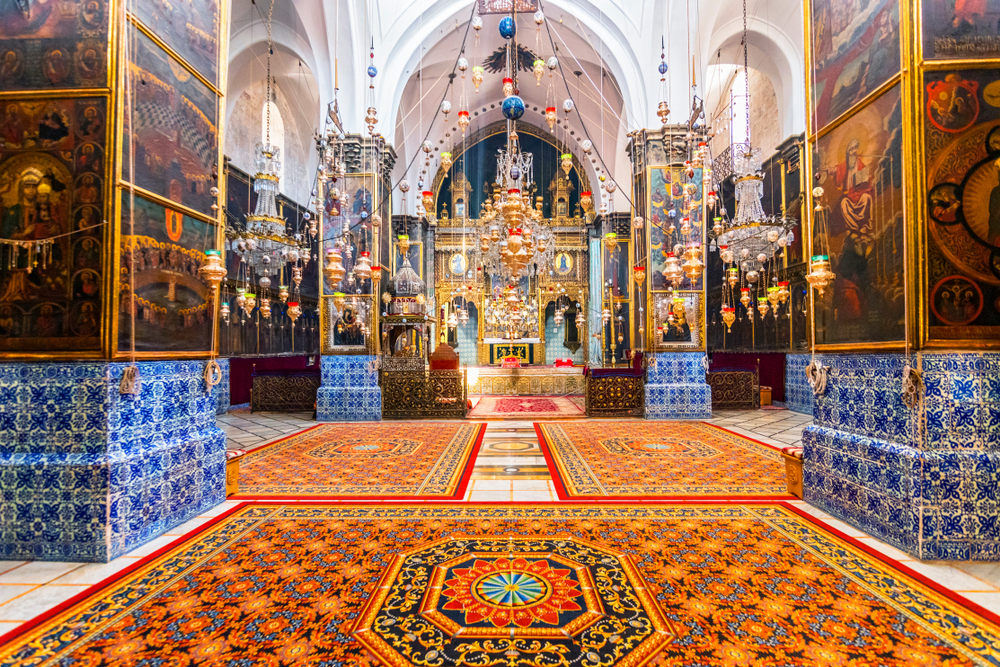 Inside the Armenian Orthodox Cathedral of St James in the Old City of Jerusalem. Photo via Shutterstock.com

What to know before visiting: This church has restrictive hours to ensure it stays a quiet, spiritual refuge. Passersby may enter at prayer time, signified by the sounding of a gong. Try visiting on weekdays, 6:30-7:30am and 3-3:30pm; Saturdays at 8am; Sundays at 8:30am. Information: 02-628-2331

It’s not often that you’d think to pack your bathing suit for a visit to a historical church, but then you probably haven’t been to the Church of Saint Mary in Tiberias.

A beacon of calm and tranquility overlooking the shores of the Sea of Galilee, the church is dedicated to Mary Magdalene and the various legends surrounding her.

Maintained by nuns, the church is part of a small farmstead. There are fruit treesand a series of restorative pools around natural springs said to have healing powers, in which visitors can take a refreshing dip.

What to know before visiting: The church is not an official tourist site but is open to the public. Typically open from 9-12 and 3-5. 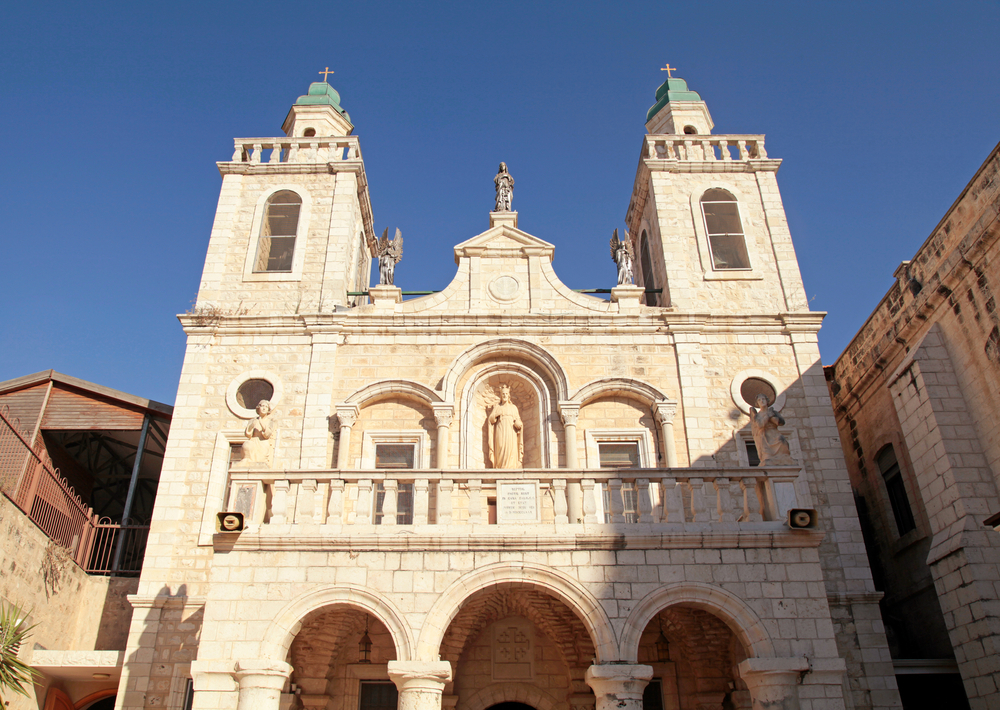 The Church of The First Miracle, the Catholic Wedding Church in Kfar Kana, Israel. Photo by Shutterstock

The Church of The First Miracle, the Catholic Wedding Church in Kfar Kana, Israel. Photo by Shutterstock

A spot in the Lower Galilee where Jesus is said to have turned water into wine at a wedding feast, the Wedding Church, renovated in the 1990s, houses ruins that date back to the fourth century synagogue it was built upon, and the Byzantine tombs that came later.

A place where couples to this day go to renew their wedding vows, this Roman Catholic church also showcases evidence of the archeological findings discovered there and has a particularly interesting Gothic-style façade covered in sculptures of angels and other religious figures. 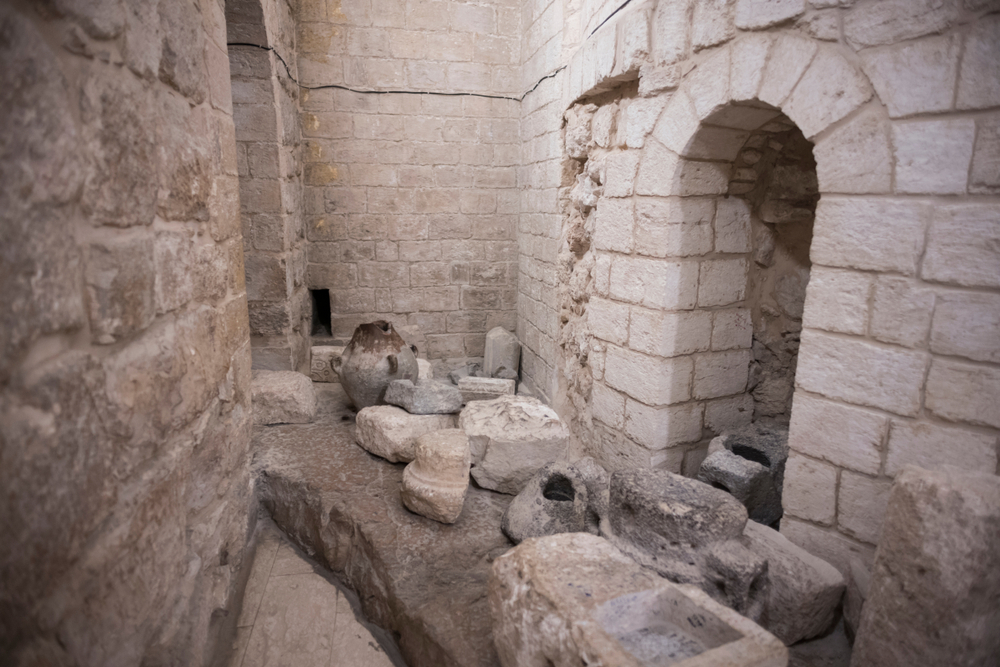 The interior of the wedding church in Kfar Kana, which commemorates the miracle of turning water into wine. Photo via Shutterstock 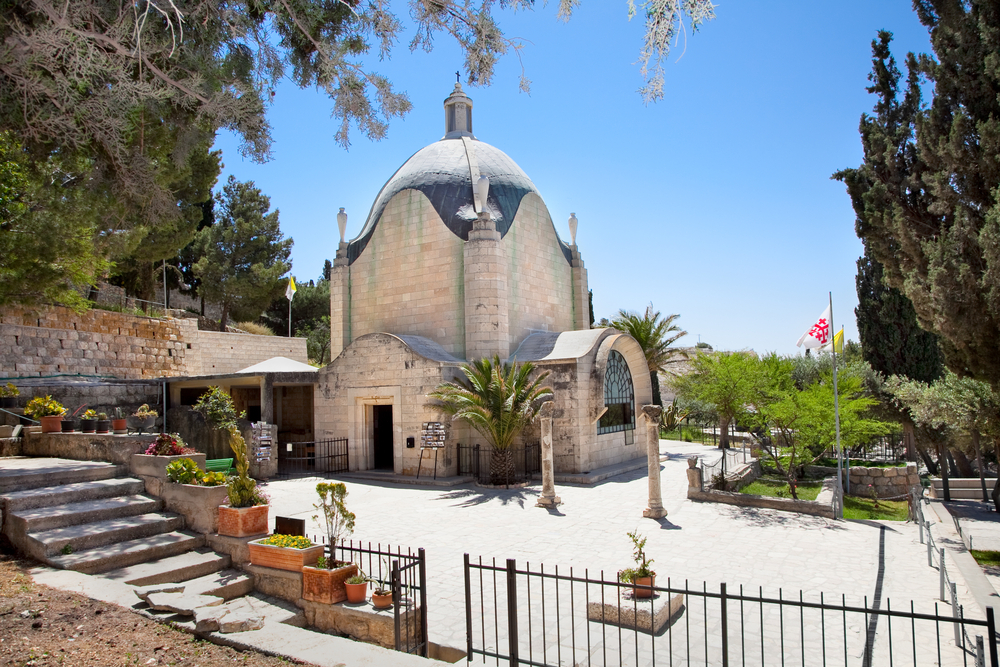 The Church of Dominus Flevit on the Mount of Olives, Jerusalem. Photo via Shutterstock

A tear-drop shaped Roman Catholic church on the Mount of Olives with a straight view onto the Temple Mount, and an epic window built for the perfect pic, Dominus Flevit (“The Lord Wept” in Latin) is one of many churches on the mountain not to be missed.

Built in 1955 over the ruins of a fifth century Byzantine church, it contains preserved Byzantine mosaic floors, excavated tombs dating back to the late Bronze Age, and a courtyard with ancient olive trees, where Jesus was said to have wept over the city of Jerusalem.

6. Monastery of St. John in the Wilderness 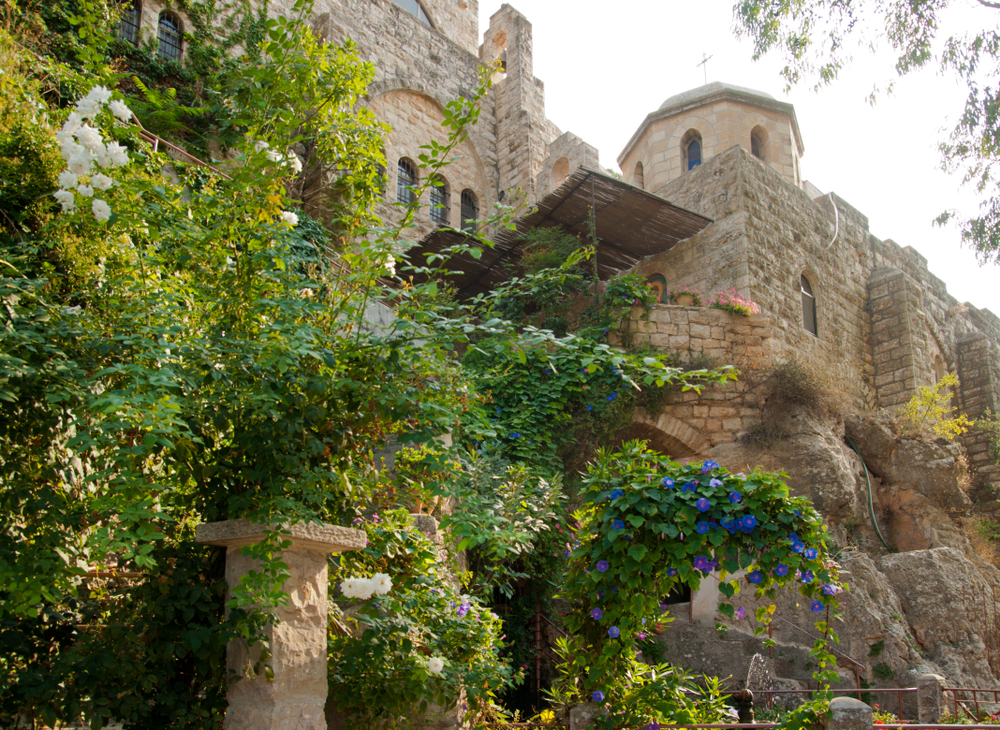 The beautiful Monastery of St. John in the Wilderness. Photo via Shutterstock

Just west of Ein Karem, a picturesque Jerusalem neighborhood known for its Christian holy sites, the Monastery of St. John in the Wilderness sits nestled into the green hillside next to Moshav Even Sapir.

Representing the wilderness in which St. John the Baptist grew up, the Catholic monastery and accompanying church were built next to the natural cave turned chapel where John is thought to have once lived.

Built next to The Spring of the Hermit containing the tomb of Elizabeth, John’s mother, and enjoying a view of the stunning Soreq Valley, this quiet and tranquil retreat complete with water features and viewpoints holds immense meaning for the Christian faithful.

What to know before visiting: The monastery sits on a steep hillside. Reaching different parts of the site requires climbing a series of pathways and stone stairs. Make sure to wear proper footwear.

CAP The interior of the St. Mary of the Resurrection Abby in Abu Ghosh. It is one of the best preserved Crusader remains in Israel. Photo via Shutterstock

A Benedictine monastery in Abu Ghosh, an Israeli Arab town 10 kilometers west of Jerusalem, this Basilica-style church was built over the 12th century Crusader Church of Resurrection, which itself was built over Roman ruins in what is thought to be the biblical city of Emmaus.

Like many other churches of great biblical significance, this too was built on an ancient freshwater spring. The vaulted ceilings and interior arched stone walls, carrying the calming harmonies of the praying monks, are covered in partially preserved Crusader-era frescos.

What to know before visiting: The church is an easy find in the town of Abu Ghosh right off the Tel Aviv-Jerusalem Highway 1. Visitors are welcome according to the following schedule: Sundays and feast days: Lauds at 7am, Mass at 10:30am, Vespers at 5pm; weekdays: Lauds at 7, Mass at 11:30 (except Fridays at 7), Vespers at 6. Information: 02-534-2798 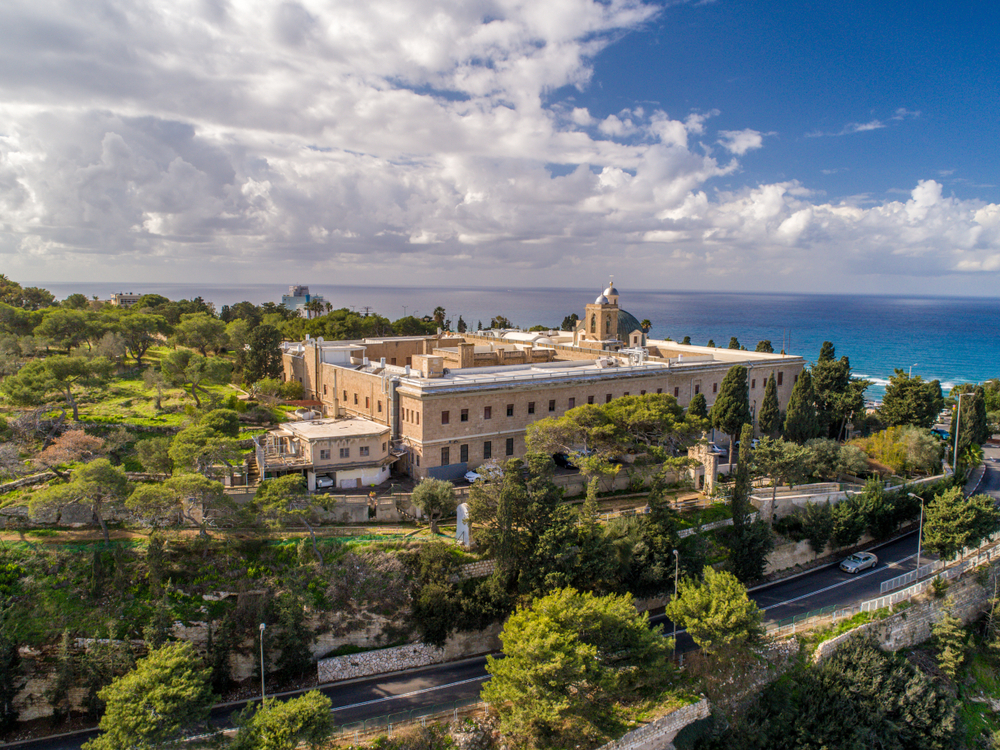 On top of Mount Carmel in Haifa is Stella Maris (Star of the Sea) Carmelite Catholic church.

Stella Maris is a monument to history as well as a religious institution. Housing the cave where the prophet Elijah was said to have hidden — a spot just under the altar where worshippers can pray — Stella Maris also has a beautifully painted interior dome with biblical scenes including that of the Prophet Elijah ascending to heaven in a chariot of fire.

Inside you can also marvel at a statue of the Virgin Mary carved from Lebanese cedar, a permanent nativity scene, and walls made of white marble.

Outside you can enjoy a spectacular view of the Haifa Bay, and pay your respects at a memorial to the French soldiers who died at the hand of Ottoman Turkish forces after Napoleon’s disastrous retreat from Akko in 1799. 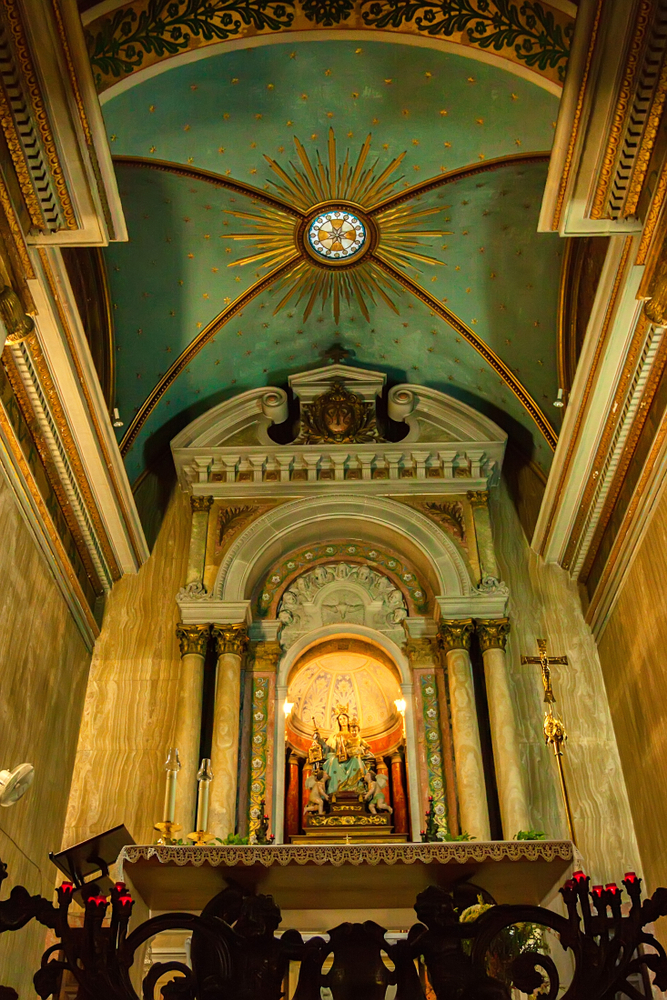 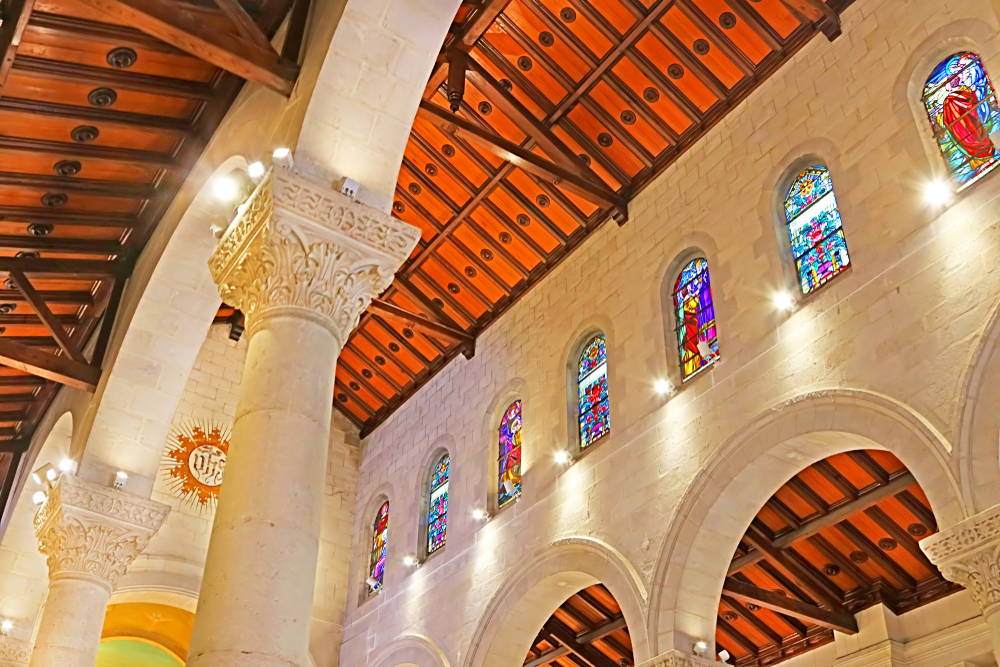 Built over what is believed to the be site of Joseph’s carpentry shop, St. Joseph is just one of the inherently special churches in Jesus’ Galilean hometown.

Taking a back seat to a series of other significant churches in the area, such as the adjacent Basilica of the Annunciation, it is no less fascinating to take in.

Built in 1914 over the ruins of a 12th century Crusader church (which was built over an earlier Byzantine church), St. Joseph has a series of caves below, including one with archaeological findings from biblical times, and one considered to have been Joseph’s workshop. 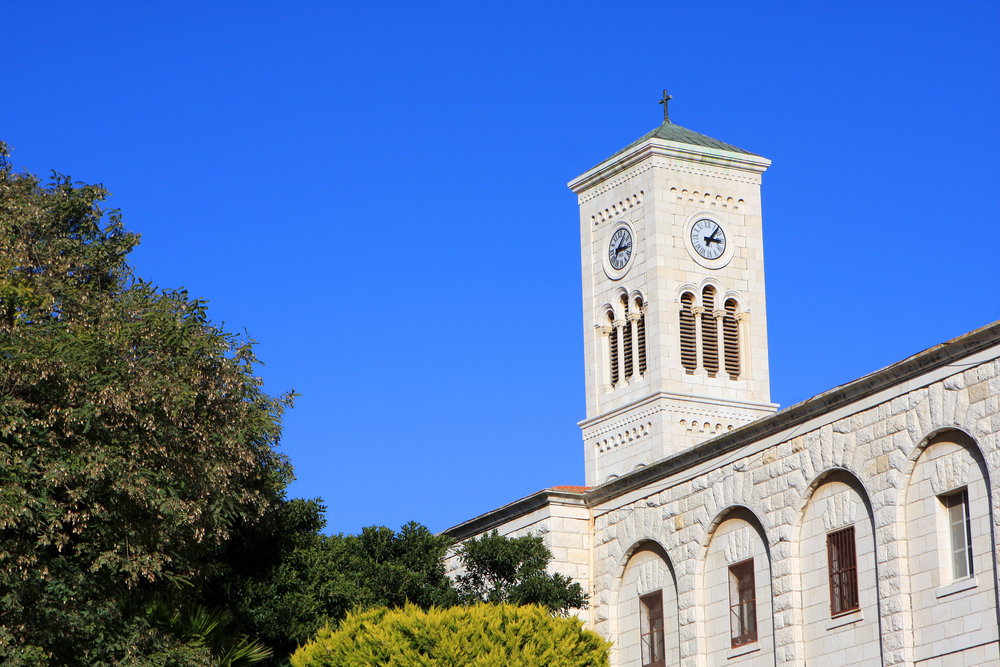 Tower of the St. Joseph’s Church in the Old City of Nazareth, Israel

What to know before visiting: Open Monday to Saturday, 8am to 5pm (winter); Saturday to Sunday, 8am to 6pm (summer)

If you want to see more beautiful churches in Israel, click on this video: