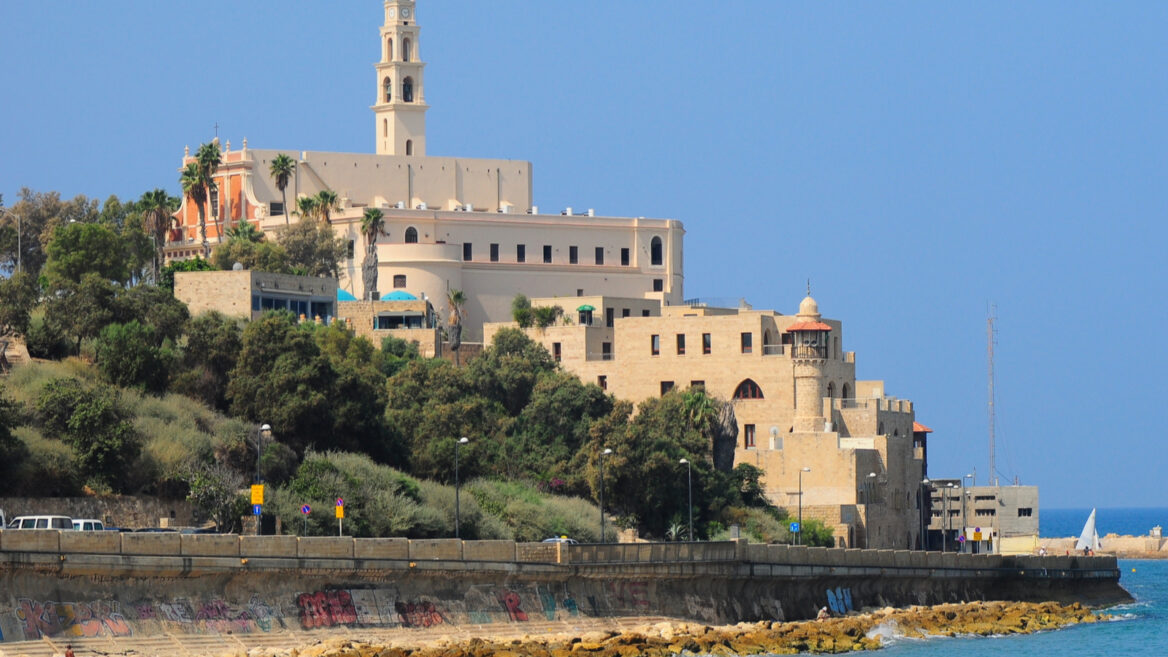 The old and the new combine in Jaffa to create a backdrop like no other. Oleg Zaslavsky via Shutterstock.com

A stroll through the cobbled streets of the Old City of Jaffa is a marvelous experience that combines sun, sea, mysterious archways, narrow lanes and a sense of history at every corner.

And for good reason, too, since the place dates back some 4,000 years and is a designated archeological site.

Outside the immediate environment of the Old City, somewhat newer buildings also strike a dramatic pose, reaching high up into the almost perennially blue skies and serving as a reminder that this is in fact a living, bustling city.

Together, the old and the new combine to create a backdrop like no other. Here are our favorite buildings in this special district of Tel Aviv. 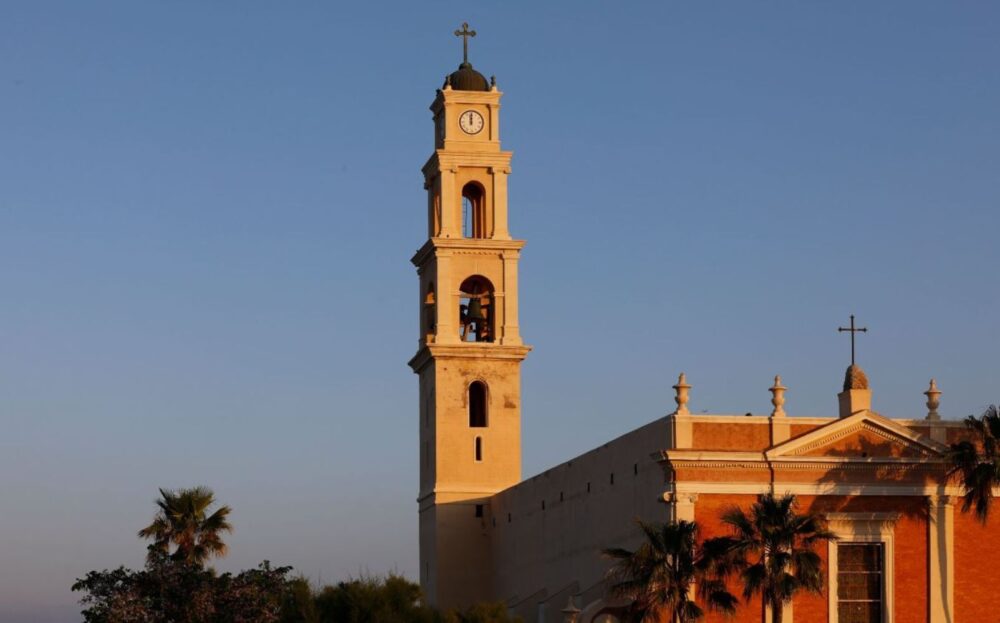 Perhaps Jaffa’s most iconic landmark, St. Peter’s Church is located at the very top of the city and for centuries welcomed pilgrims to the Holy Land. The present-day church, constructed in the late 19th century, stands atop the ruins of several iterations dating back to Byzantine and Crusader times. The church’s interiors are heavily embellished, giving a rather European feel to an otherwise Middle Eastern setting. 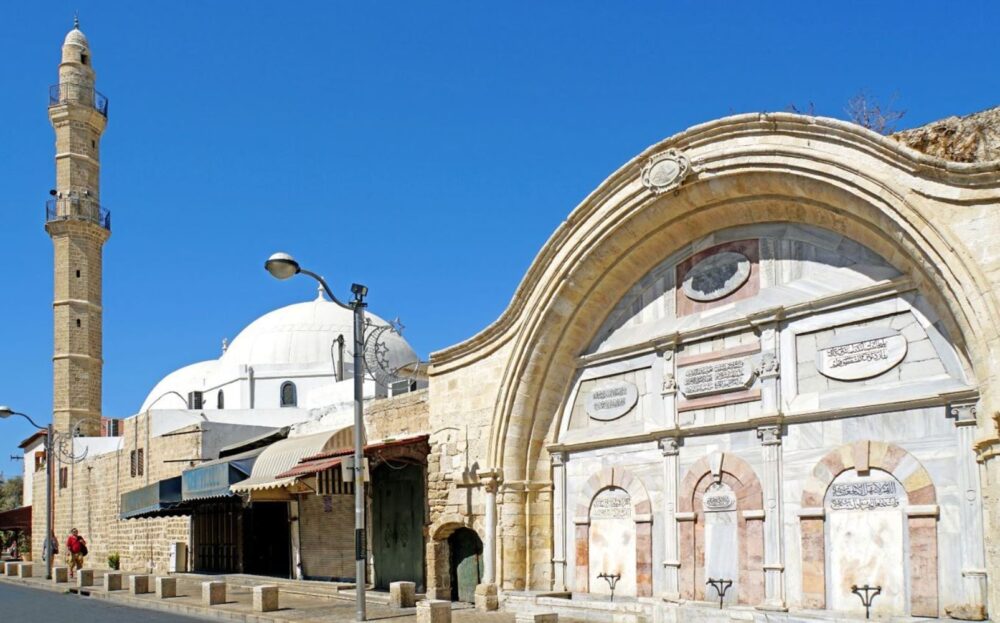 Mahmoudiya Mosque is the largest mosque in Jaffa and stands at the northeast corner of its Old City. It has been serving locals since the 18th century. Photo by Dennis Jarvis/Wikimedia Commons

The Mahmoudiya Mosque, one of the largest mosques in Israel, has been serving locals since the 18th century. The complex is built around courtyards and is decorated throughout with historical granite and marble columns that were brought to the site from locations across the country. Access to the site is possible through various impressive-looking gates that were opened as Jaffa expanded beyond its original Old City confines, and its southern side is adorned by a huge sebil, or public water fountain. 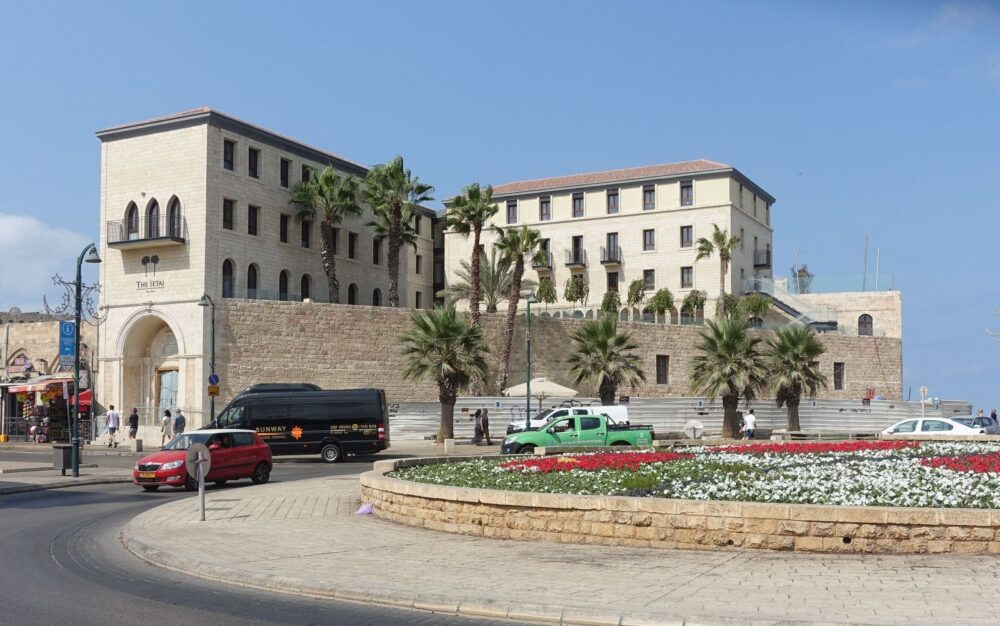 The Setai Hotel: once a prison, nowadays a luxury hotel. Photo by Ori/Wikimedia Commons

One of the first sights to greet visitors to Jaffa is the citadel-like Setai Hotel on the city’s waterfront. But before the imposing building was a luxury hotel, it served an entirely different population: prisoners. And generations of them, too, for the building was constructed in the late 19th century and served as a police station and detention center under the Ottomans, British and Israeli authorities. Today it is a magnificent-looking, opulent oasis with some of the best seaside views in town, which cost a lot more (at least in terms of hard cash) than they used to. 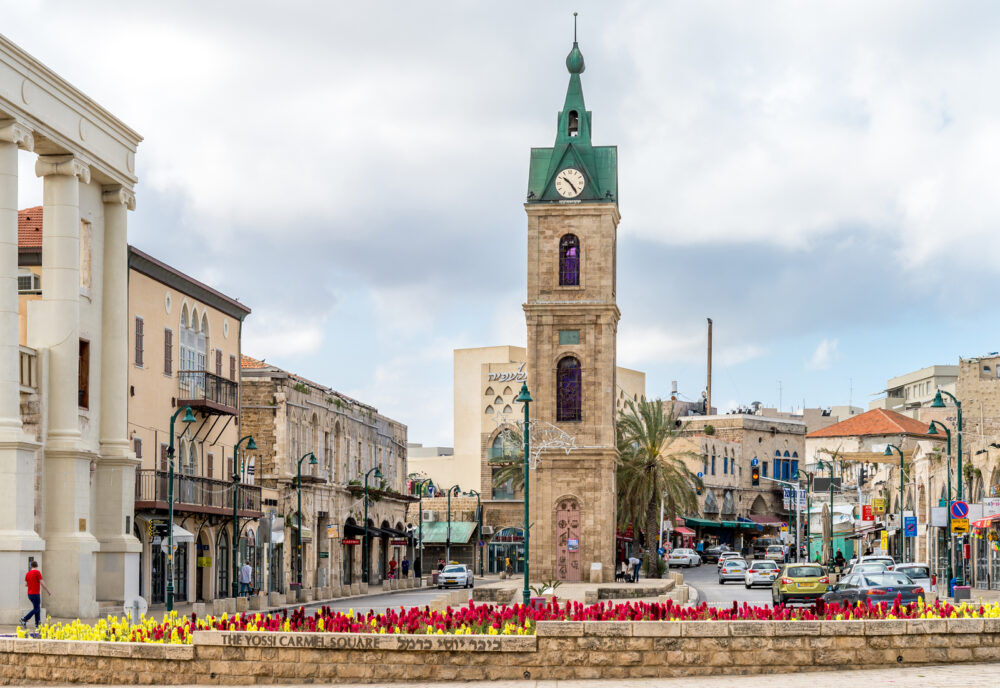 The Jaffa Clock Tower was built in the early 20th century to mark the city’s modernization process. Photo by Boris-B via Shutterstock.com

Right opposite the Setai Hotel stands another Jaffa landmark – its clock tower. Erected at the beginning of the 20th century to celebrate the silver jubilee of the rule of Ottoman Sultan Abdul Hamid II, it also marked Jaffa’s transformation into a modern city. The construction of the clock tower was made possible through the cooperation of local Jewish and Arab residents and was executed in a European style by a Jewish architect. Nowadays, it is the site of annual Christmas celebrations, when the whole square surrounding it is adorned with festive lights. 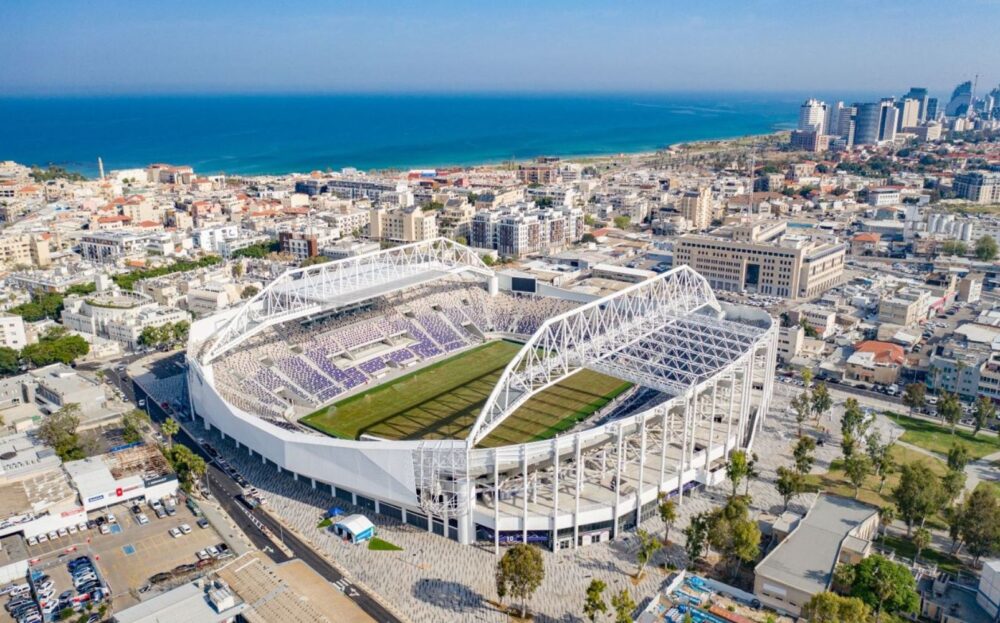 Definitely the most modern building on this list, the bright white Bloomfield Stadium cuts a magnificent figure through the Jaffa skyline, particularly when viewed through the rooftops of the flea market. With its roots in pre-state Israel, the current iteration of the stadium was inaugurated in 2019 and serves as the home stadium for Tel Aviv’s three major soccer teams. It can seat almost 30,000 spectators and boasts special grass that was specifically grown for its pitch at a local park. 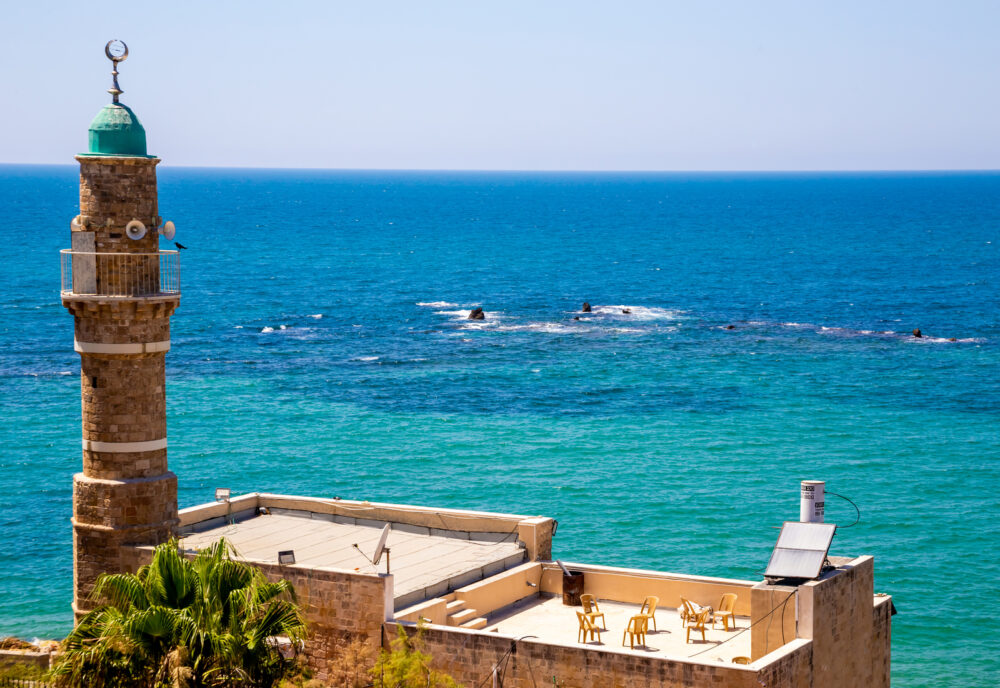 The Sea Mosque was built in the 17th century and has served Muslim seamen for centuries since. Photo by KiyechkaSo via Shutterstock.com

The little Sea Mosque stands, as its name suggests, right on the seafront in Jaffa’s Old City. Made of limestone, it dates back to the 17th century and for centuries served as a house of worship for Muslim seamen before they set sail. The mosque underwent renovations in recent decades but is closed to the public. You can admire the view of its minaret against the backdrop of the sea. 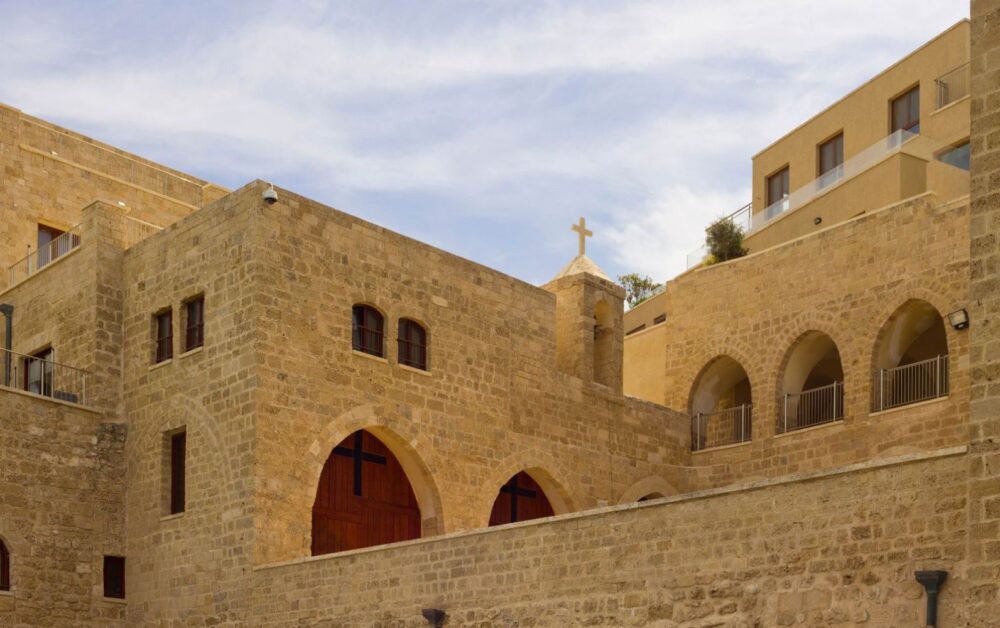 St. Nicholas Monastery, Old Jaffa. The Armenian monastery is a complex that dates back 1,000 years. Photo by Andrew Shiva/Wikimedia Commons

St. Nicholas Monastery in Jaffa’s Old City is an ancient Armenian complex that dates back some 1,000 years. It rose to fame in the late 18th century when it hosted Napoleon Bonaparte and his soldiers during the French campaign in the city. Napoleon requested to commemorate the event, which was then envisioned by artist Antoine-Jean Gros in his painting Bonaparte Visiting the Plague Victims of Jaffa that hangs in the Louvre. 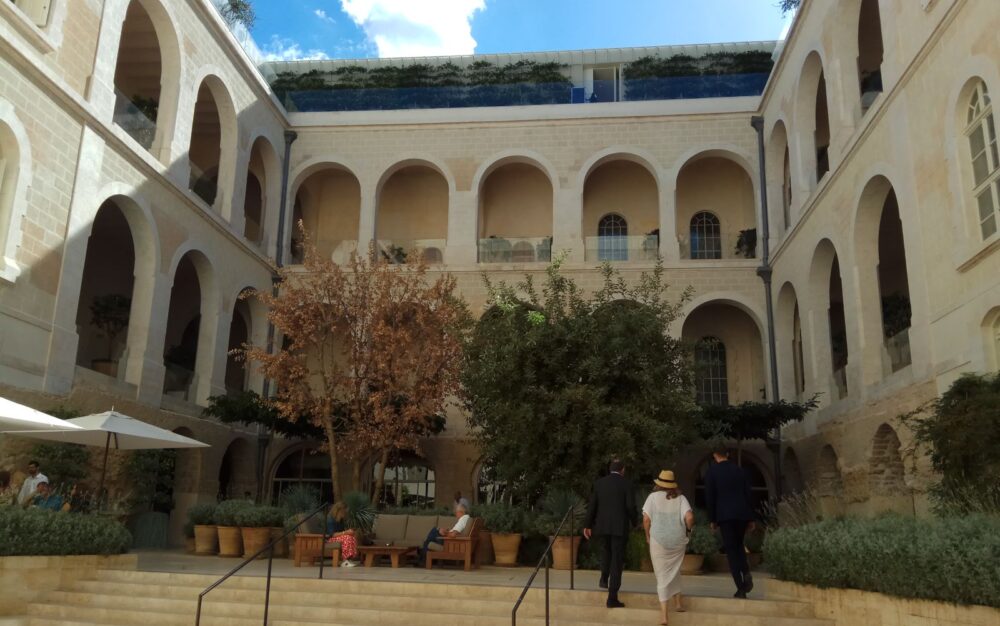 The Jaffa was once a charitable French hospital, but now serves a far more luxurious purpose. Photo by Dr. Avishai Teacher/Wikimedia Commons

Another French connection can be found in Jaffa’s former French hospital. Built in the late 19th century, it had 40 hospital beds and devoted, free-of-charge care courtesy of French nuns and a visiting specialist doctor. In recent years it underwent renovations to become the luxurious and beautifully decorated Jaffa Hotel. The complex’s previous church, in case you were wondering, now serves as the hotel’s bar. 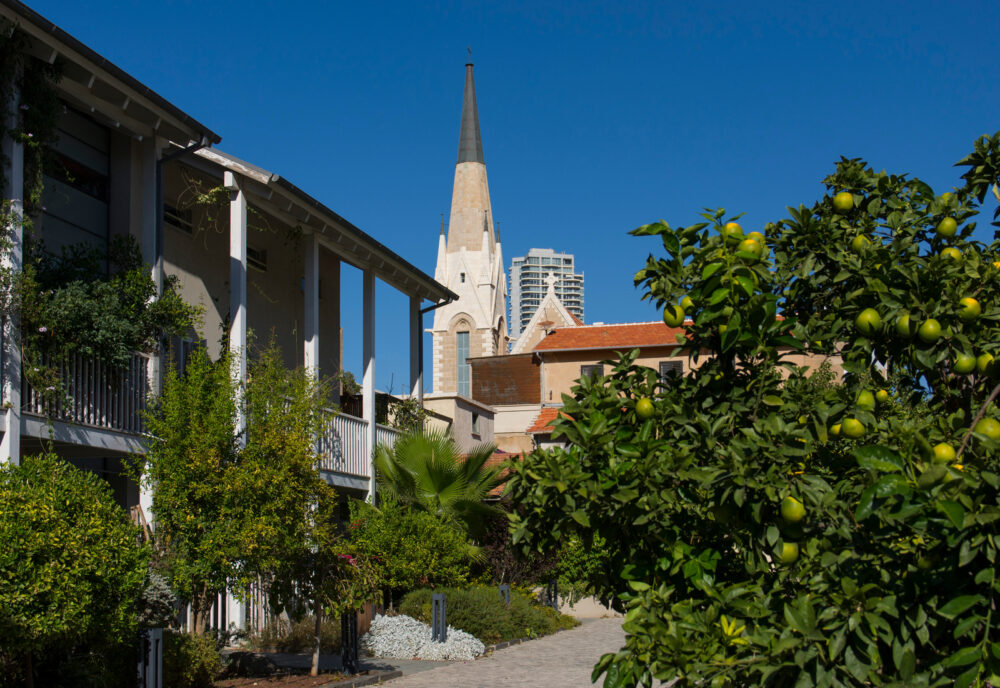 The American Colony on Jaffa’s edge is one of the most beautiful spots in town. Photo by Sasha Taran via Shutterstock.com

The American Colony is so full of beautiful buildings it’s hard to pick just one. The neighborhood was established in the 19th century by Protestant pilgrims from Maine, many of whom sailed back home after only a few years in the Holy Land. German Templers soon moved into the neighborhood in their stead and added a church and a few more buildings, but after they left during World War II the area fell into disarray. Recent years have seen the architectural gem undergo extensive renovations that have turned the former colony into one of the prettiest spots in the city and a great place for a leisurely and envy-inducing stroll.

UNCOVER ISRAEL - Get the ISRAEL21c
Weekly Edition free by email
Sign Up Now!
Bring Israel's story to life.
Millions of people around the world rely on us to gain a deeper understanding of Israel. We are the trusted source for original content you won't find anywhere else.
You can make a difference. Donate today to support journalism that brings Israel’s story alive.
SUPPORT ISRAEL21c
Read more on:   Culture, Travel, Architecture, Jaffa, American Colony, Jaffa Hotel, Setai Hotel, clock towers