The global marketplace has made many brands of chips or candy bars passport-less and available everywhere. But some snack foods still hold on to their country-of-origin identity.

The YouTube channel “Emmy Made in Japan” and BuzzFeed  have viral videos of Americans tasting Israeli sweet and savory snacks for the first time.

When was the last time you hit the Made-In-Israel shelves for a different snack experience?

Here are nine Israeli munchies to try at least once. Let us know which one is your favorite! 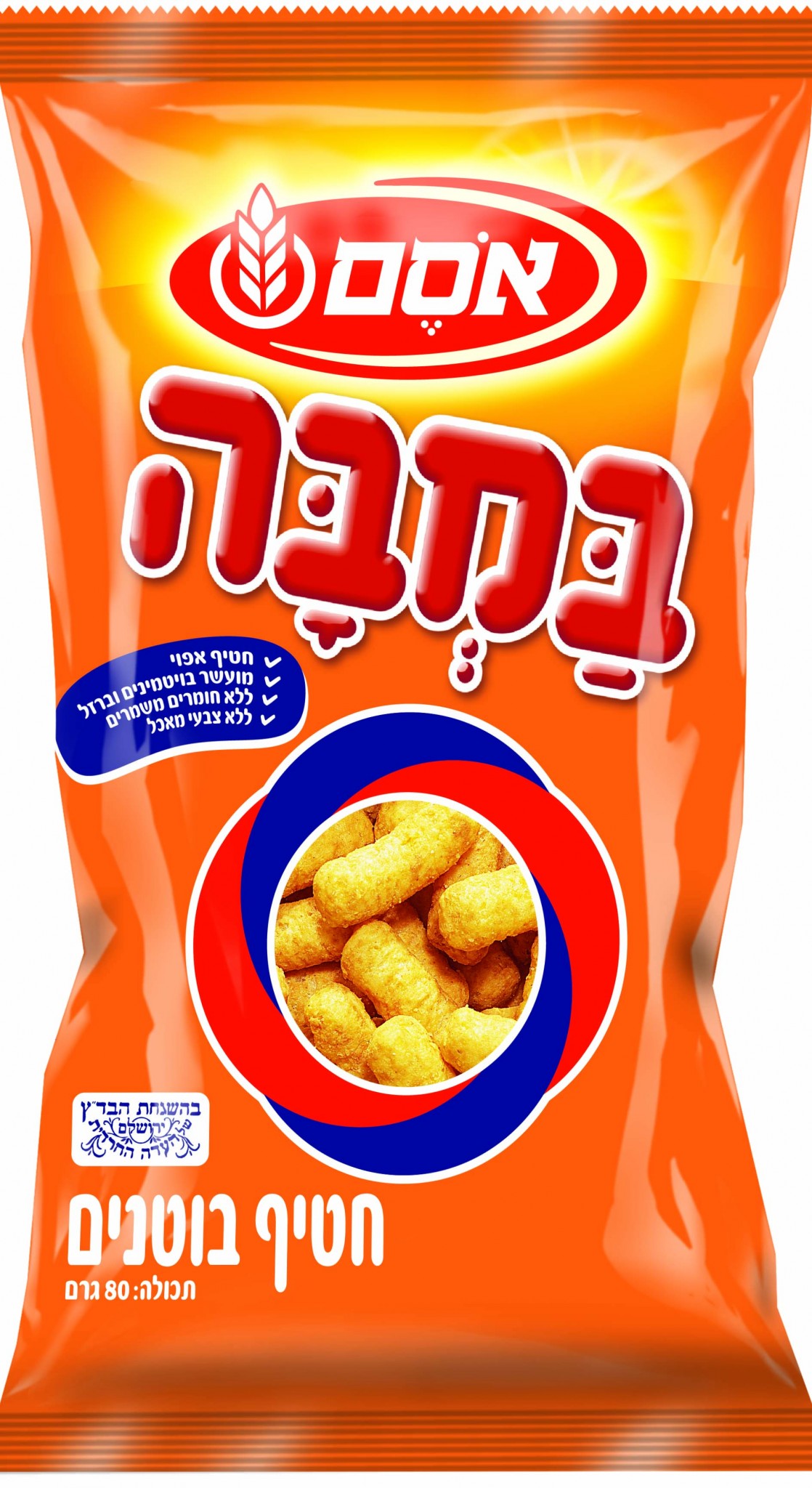 Bamba is Israel’s top-selling snack, accounting for close to a quarter of the snacks market, according to its manufacturer, Osem. Osem produces one million bags daily of this soft-yet-crunchy, sweet-yet-savory peanut-flavored puffed corn snack. Surveys show that a whopping 90 percent of families buy it on a regular basis.
Bamba is promoted as a healthy snack as it contains 50 percent peanuts and is fortified with vitamins and minerals (A, B1, B3, B6, B12, C, E, folic acid (B9) and iron). It’s also gluten-free. British and American studies have shown that this addictive treat plays a role in preventing peanut allergies.
According to Osem, Bamba was first produced in 1964 with a cheese flavor (similar to Cheetos) and in 1966 the cheese was replaced by peanut butter. Bamba has become a part of Israeli culture, and there’s even a visitors’ center dedicated to this snack food.  Like all great products, Bamba has a number of copycats on the market including Shush and Parpar. 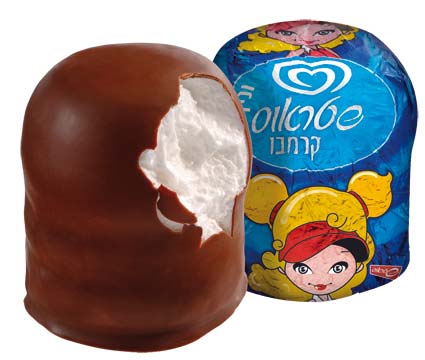 This chocolate-covered, marshmallow cream-topped cookie treat is referred to as Israel’s national winter snack. The name means “cream in it” in Hebrew. Some 50 million Krembos roll off the manufacturing lines in Israel between October and February (the treat melts in hot temperatures).

Each Krembo is hand-wrapped in crinkly foil. This portable s’mores treat comes in vanilla and mocha flavors, with vanilla being the more popular by far. And the treat is so well loved that it has made cultural appearances in Israeli films, television shows and songs. In the Hebrew version of Harry Potter and the Philosopher’s Stone, Dumbledore’s favorite treat is a Krembo instead of a sherbet lemon.

There are YouTube videos of how it should be eaten. Strauss, the country’s leading Krembo producer, published a study that shows 69% of Israelis prefer to eat the treat from the top down.

You can buy individual Krembos or packs of 10 at grocery and convenience stores. Upscale restaurants and ice cream parlors often offer a fancy version of the Krembo on their winter dessert menus.

Bissli are crunchy snack bits that resemble pasta. Actually, the Osem manufacturer used its pasta production expertise to create these savory treats for the snack-food market in 1970. There are six flavors – grill, barbeque, onion, pizza, falafel and Mexican – and each one comes in a different shape. Newcomers to the snack are often put off by the brown color of these bite-size wheat snacks. But Israelis who grow up with these salty flavored treats have no qualms, and even like to use Bissli as a crunchy schnitzel coating. 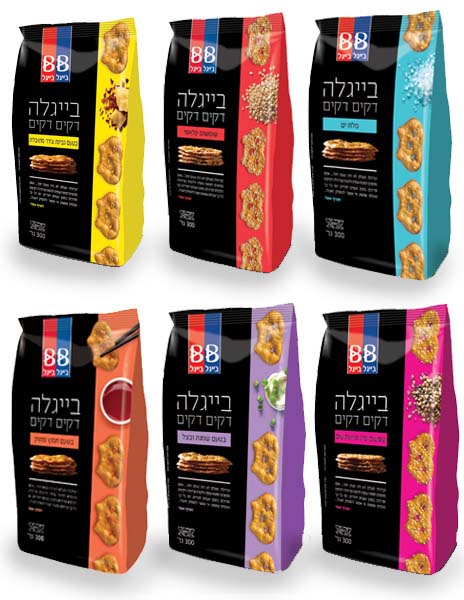 The Israeli pretzel comes in sticks, figure eights, circles and triangle-square-circle mix packs, and flavors including salted, sesame seeds and salt, cream-cheese-onion, chili, cinnamon-honey and chocolate-covered. Beigel & Beigel and Osem are the main manufacturers. Beigel & Beigel, founded in 1949, holds more than 60 percent of the Israeli pretzel and cracker market share.

In 2011, Osem shook up the Israeli playing field with a flattened and crunchier version of the pretzel called Shtuchim. Beigel & Beigel answered with Shtuchaleh not long after. For consumers, it opened a whole range of new flavors.

If you like pretzels, you’ve probably been eating an Israeli recipe without realizing it. Beigel & Beigel exports to more than 20 countries (Unilever is a major shareholder of this company). 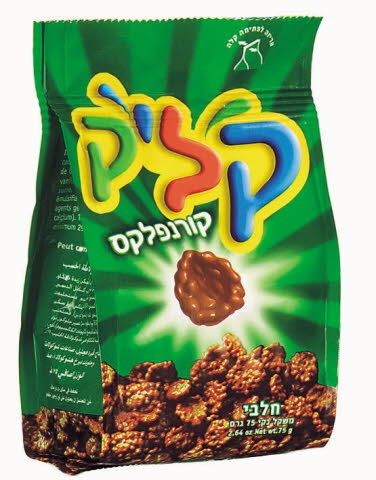 Klik chocolate snacks come in little packets with pieces of chocolate-covered-something from cookies to cornflakes, pretzels to wafers. The Klik brand was born in the Vered Hagalil chocolate factory. The personalized packets were a success from the moment they hit the market.

Klik can also be found in chocolate-bar form. The product, usually connected with the youth and children’s market space, added a “fine taste” line for adults with chocolate covered hazelnuts, pecans, bittersweet chocolate and pomegranate flavors added to the mix. The Israeli candy label is now owned by Unilever. 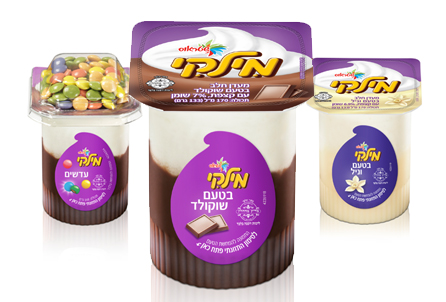 Milky is no ordinary chocolate pudding but rather the most successful dairy product on the Israeli market since its debut in 1979. The pudding with a secret whipped cream topping (only five people know the recipe) is the holy grail of dessert snack foods.

In 1986, the Strauss company launched its first video commercial for this product called “Battle of the Milky.” It became a huge hit, spurred two more sequels, and secured a spot in the Israeli entertainment lexicon. The women who starred in the Milky commercials – Sandi Bar, Hila Nachshon and Bar Refaeli – are still known as the Milky Girls a la Charlie’s Angels.
In 2014, the fourth installment of the Battle of the Milky kicked into gear – only this time it wasn’t a commercial for the product but rather a protest by young Israelis against the high cost of living in Israel – with the Strauss snack serving as just one example of Israeli goods costing more in Israel than beyond its borders. 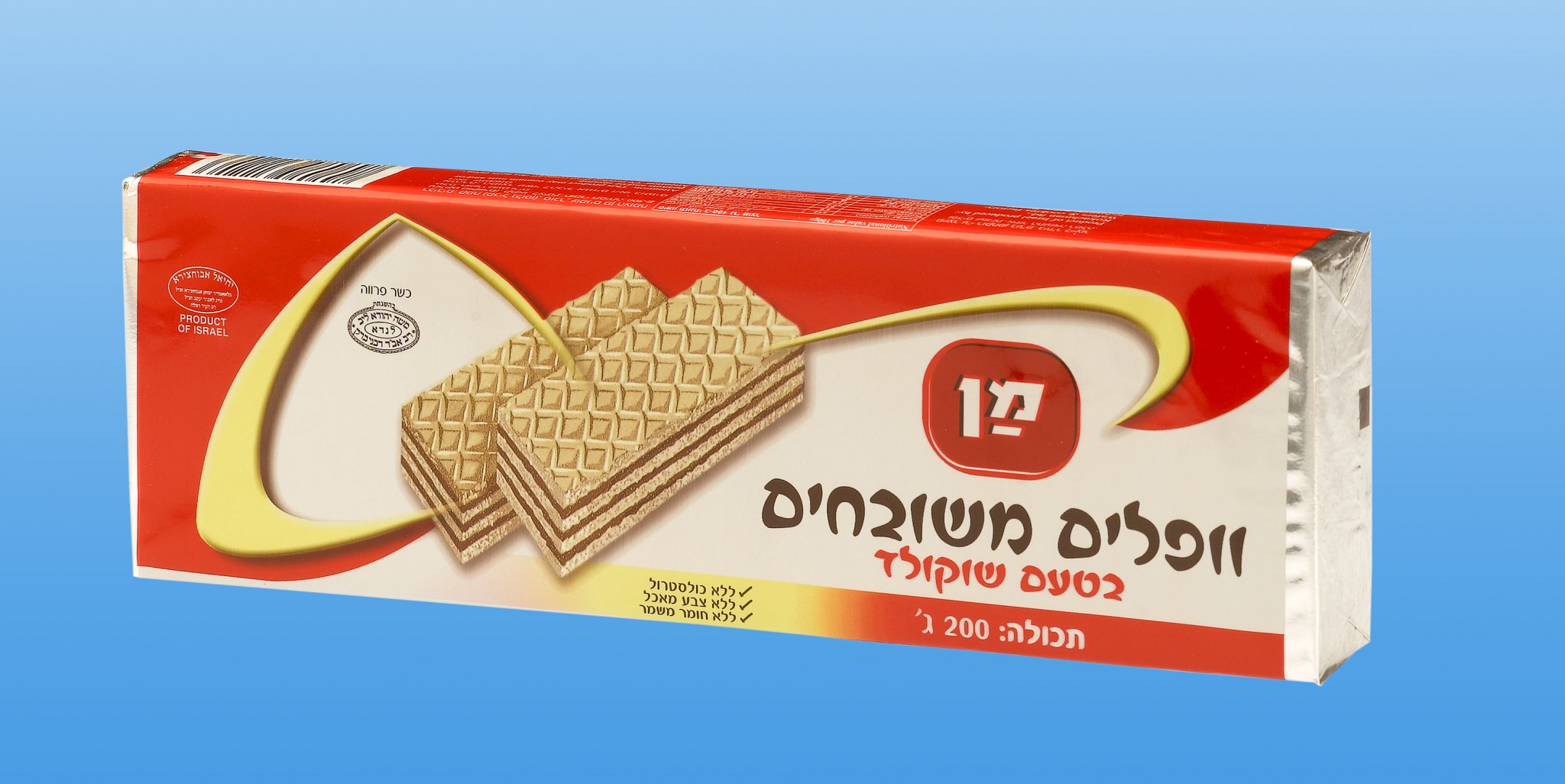 Wafers are extremely popular in Israel and can be found in every Israeli supermarket and convenience store. In Hebrew, they’re called vaflim or baflim. Consumer reports say 92 percent of households consume wafers on a regular basis. And a Hadassah magazine story says Israelis are “the world’s second-greatest consumers of this treat after the Austrians, from whom the manufacturing knowhow came here.” Wafers are the go-to snack from kindergarten through the army and over to business conferences. These cookies come in chocolate, lemon, vanilla, hazelnut and coffee flavors. 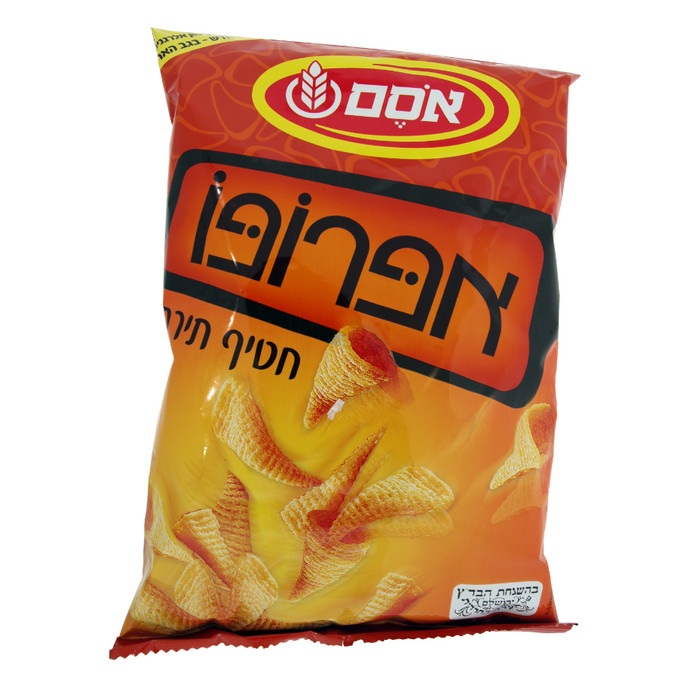 Israel’s version of Bugles, this crunchy corn snack is the “No. 1 entertainment snack” in Israel –according to its manufacturer– because of its cone shape for scooping up dips.

It comes in two flavors – plain and Italian spices.

And, it’s also gluten-free. Two copycat alternatives on the market include Le Nosh and Pipeto. 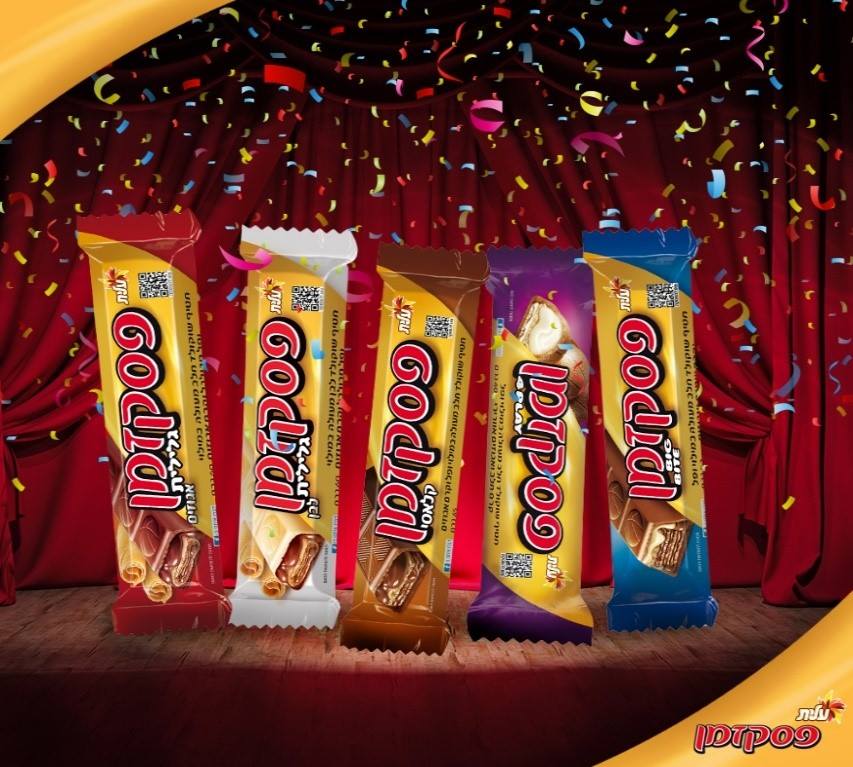 Pesek Zman (Time Out) is Israel’s version of the KitKat. It is manufactured by Strauss Group under its Elite confectionery brand. This candy bar made its debut in 1982 in a flat version of a chocolate cream-filled wafer with chocolate coating. By 2008, the chocolate cream had been replaced with hazelnut cream.

In 2012, Pesek Zman hit the headlines when a consumer report showed that the Israeli-made candy was cheaper at grocery stores around the world than at home, where it is made.

So, what’s your favorite?

UNCOVER ISRAEL - Get the ISRAEL21c
Weekly Edition free by email
Sign Up Now!
Bring Israel's story to life.
Millions of people around the world rely on us to gain a deeper understanding of Israel. We are the trusted source for original content you won't find anywhere else.
You can make a difference. Donate today to support journalism that brings Israel’s story alive.
SUPPORT ISRAEL21c
Read more on:   Culture, food, Osem, Strauss, Elite, snacks, Bamba, Milky