At five minutes to midnight on June 14, 2018, about 800 people waited to enter Jerusalem’s Tower of David Museum.

Jews, Muslims and Christians, young and old, most of them strangers to one another, they were forgoing a night’s sleep for the chance to sing Bob Marley’s “One Love” in three languages and three-part harmony as a show of unity from Israel.

The event was organized by Koolulam, a social musical project that gathers as many as 12,000 people at a time, from a broad Israeli spectrum, to film a joint singing production for sharing on Facebook, YouTube and WhatsApp. 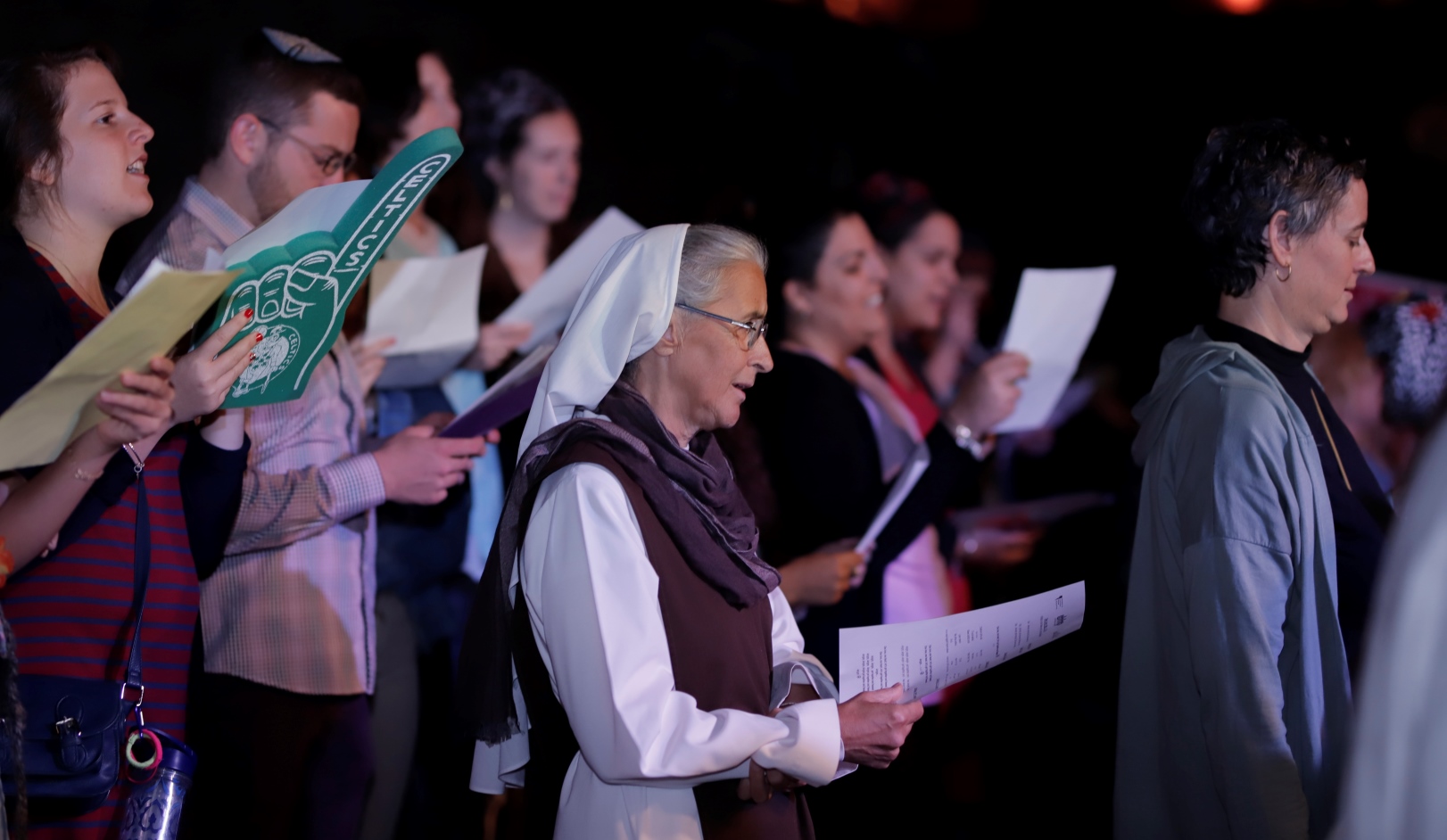 Participants in the Koolulam social music project at the Tower of David Museum. Photo by Ricky Rachman

The unusual timing of this particular mass singalong wasn’t accidental.

That night was Eid al-Fitr, a holiday marking the end of Ramadan, the Muslim month of fasting and introspection, and the Jerusalem visit of Kyai Haji Yahya Cholil Staquf, secretary general of Indonesia-based Nahdlatul Ulama, the world’s largest Muslim organization with more than 60 million members.

Staquf had seen a Koolulam video and contacted the organization to say he was coming to Israel and wanted to be part of an interfaith social music event. Coincidentally, the Tower of David and Jerusalem.com (a website offering in-person and virtual tours of Jerusalem) wanted to sponsor such an event, says Koolulam cofounder and general manager Michal Shahaf Shneiderman.

“It was an amazing confluence and fit our agenda that each person can be part of our events no matter where he comes from or what he believes,” she says. “And what could be better than this historic location to host people of three religions singing together in English, Hebrew and Arabic?”

Shneiderman says Koolulam reached out to Muslim and Christian groups that might be interested in taking part. “Happily, they all came and sang with us.”

Sold out in 7 minutes

Koolulam tickets always sell out quickly but there were fewer tickets available than usual due to space limitations at the Tower of David. They were gone in seven minutes – leaving Jerusalem resident Gaby Shine Markowitz disappointed, but not for long.

“My daughter is involved in Kids4Peace and they were offering tickets they’d bought for the families, so I went with my 11-year-old daughter and my cousin,” Markowitz tells ISRAEL21c.

The midnight start time didn’t faze her. “There aren’t many things as a young mom I’d give up my sleep for but we felt it was so beautiful we decided to do it. As an Israeli and as someone who loves to sing I think it’s an amazing initiative. And it was absolutely incredible.”

After the crowd entered the ancient citadel-turned-museum of Jerusalem history, they were handed lyrics sheets and divided into soprano, alto and baritone groups to spend the next 45 minutes learning their parts. 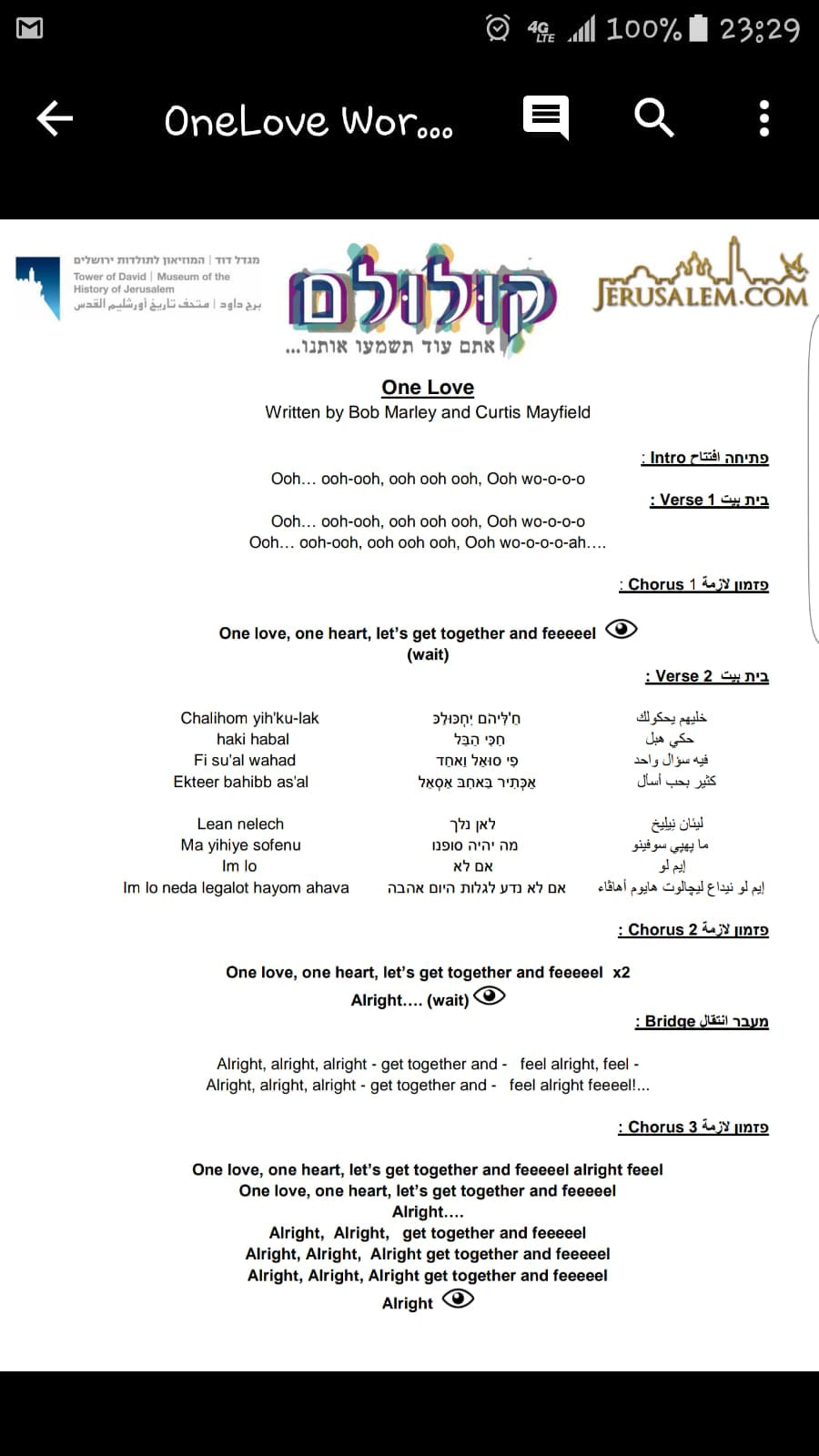 “The Tower of David is a beautiful place and they had the light show going as we entered, so it was an electric atmosphere,” Markowitz recalls. 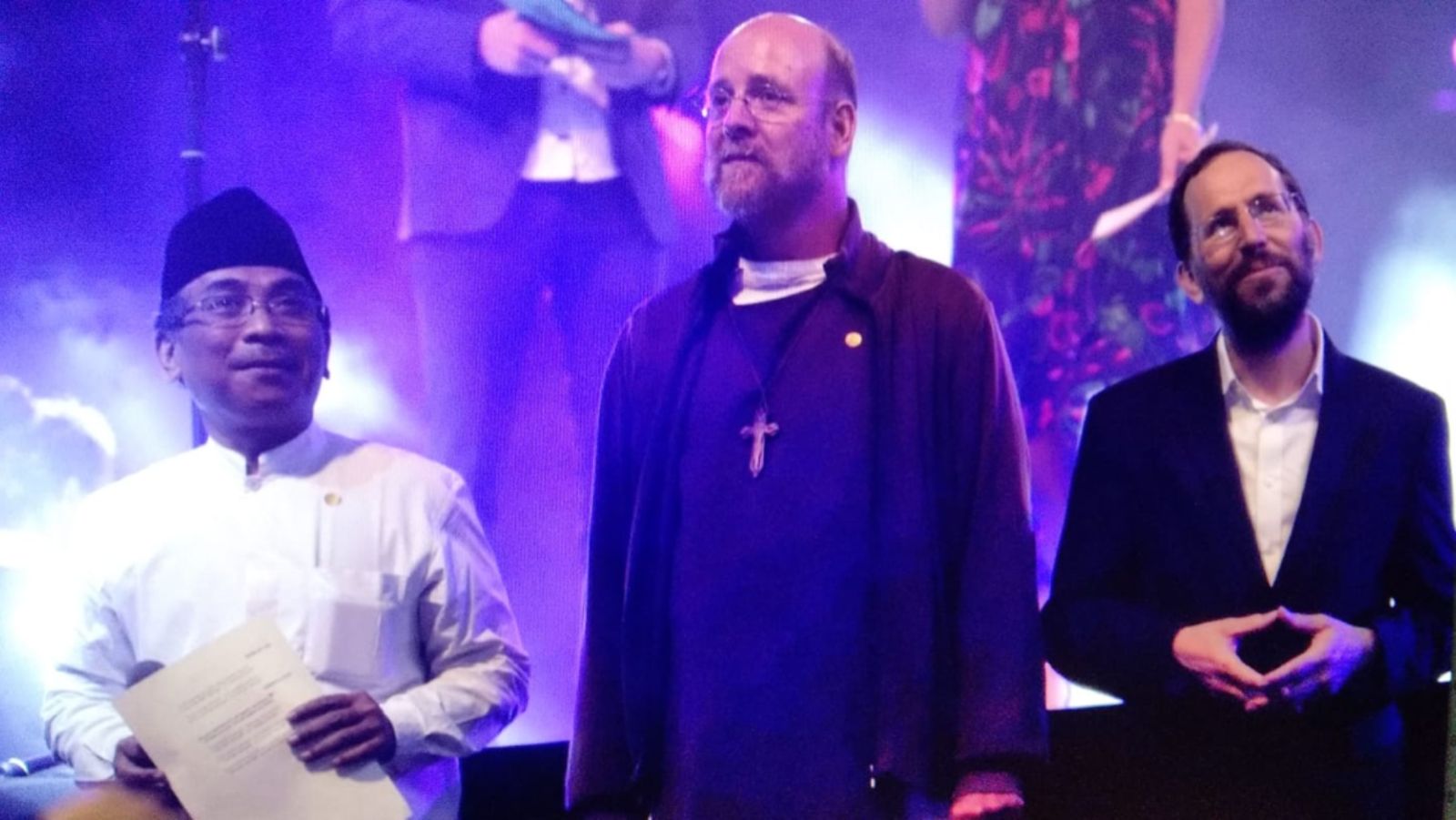 When sopranos, altos and baritones reconvened around the stage, Yefet conducted five takes of “One Love” combining all 800 voices.

“It was such a buzzing, energetic atmosphere. My daughter’s eyes were shining. She said, ‘Mom, this is the most amazing experience.’ It was a privilege to be part of Jews, Christians and Muslims singing together in Jerusalem on the night of Eid.”

Partners in the singalong were the Interfaith Encounter Association, Coexistence Trip Initiative, Tiyul-Rihla, the World Jewish Congress, Bayt ar-Rahmah and many other local and international organizations involved in interfaith relations.

Michal Lichtman, founder of Jerusalem.com, explains that the Koolulam musical event was the perfect occasion for her to realize her long-held vision of “spreading good energies through sound from a place that includes all religions” to honor the memory of her late husband.

Tower of David Museum Director Eilat Lieber said she welcomed the opportunity to bring so many people throughout the world together promoting messages of peace, respect and friendship.”

One Love Peace Event – Makaing Of

At midnight after the final day of Ramadan, and in honor of the Jerusalem visit of Indonesian Sheikh Yahya Cholil Staquf—General Secretary of the world’s largest Muslim organization, Koolulam, the Tower of David Museum and Jerusalem.com invited more than 1,000 Jews, Muslims and Christians—to sing together to celebrate the message of universal love and compassion. Before the main Koolulam event, religious leaders gathered for a colloquium on how religion can serve as a bridge to mutual understanding, compassion and peace between people. Hosted by Dr. Yehuda Stolov, CEO of the Interfaith Encounter Association, the meeting was attended by leaders of three religionsWe will be posting the official Koolulam Clip on Sunday morning at 10:00 – can't wait……!https://www.youtube.com/watch?v=C7d849b_wO4Nahdlatul Ulama קולולם – Koolulam Interfaith Encounter Association

Posted by Tower of David Museum on Thursday, 5 July 2018