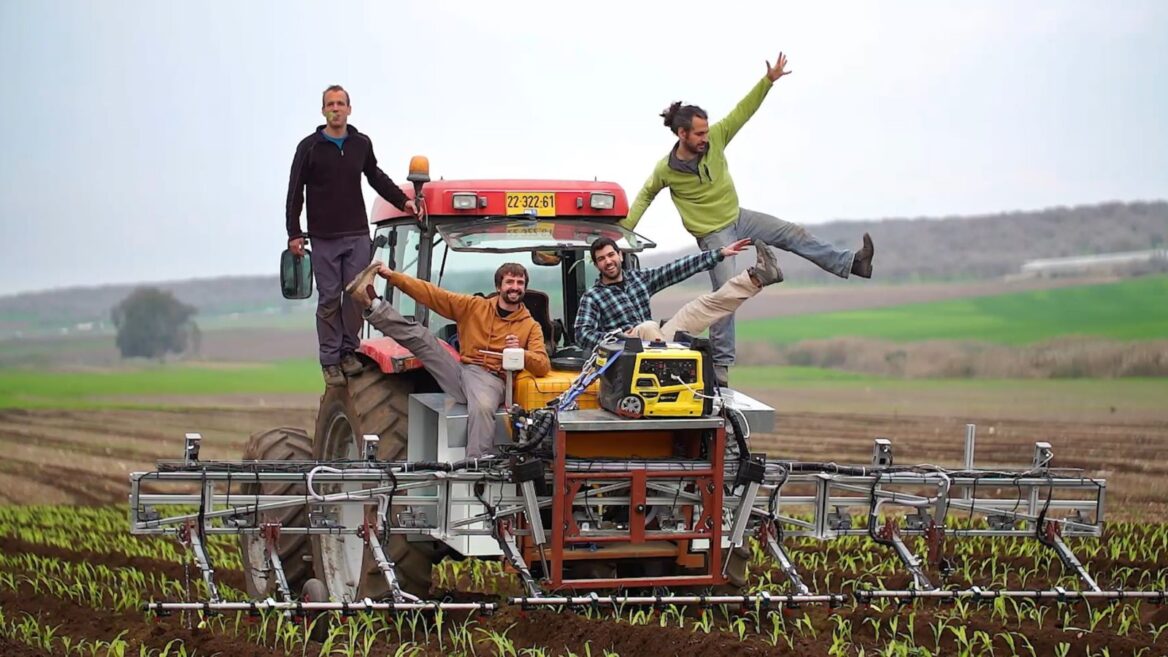 The coronavirus crisis proved that no country should depend on imports for food security, says Jerusalem Venture Partners (JVP) Partner Michal Drayman.

“God forbid if we don’t have the internal ability to produce our own fresh produce,” she tells ISRAEL21c.

Yet Covid isn’t the only crisis affecting food security. Water is scarce due to climate change and wasteful farming practices. Pests, weeds and crop diseases are building resistance to the toxic chemicals used to control them.

Neither farmers nor consumers want their fruits and veggies coated with chemical residues, but there aren’t enough safe and effective alternatives.

All these factors are pushing forward a range of cost-effective eco-friendly solutions from Israel, a world leader in agricultural technology.

The need is even more acute now that the European Union has declared a goal of a 50% reduction in chemical pesticide use by 2030.

“Without technology, this will be very difficult to accomplish,” says Drayman. “We believe that the growing demand for environmental protection, along with regulatory requirements, are generating a significant market for agritech.”

International investors including corporate giants such as Monsanto, Syngenta and Bayer are investing in green Israeli agtech, Drayman says. Domestic support comes from the government and several funds and accelerators, including JVP’s food-tech/agtech fund and innovation commercialization company Trendlines Group.

Below are 8 Israeli agtech companies working to green farms across the world, some already in business for years and others still in the R&D stage.

Founded on Kibbutz Sde Eliyahu 35 years ago, BioBee was one of the pioneers of natural agricultural products now sold in more than 100 worldwide markets.

“Pollination is crucial to producing fruit. The most famous pollinator is the honeybee, which is having issues. So we produce bumblebees and that solves many of the limitations of the honeybee,” Carmi tells ISRAEL21c.

Honeybees need sunlight to navigate, whereas bumblebees can pollinate indoor plants in greenhouses or outdoor plants under cloudy or rainy conditions. A side benefit is that farmers using bumblebee pollination greatly reduce their use of pesticides so as not to harm the bees.

Biologically based integrated pest management is about providing beneficial insects, plant extracts and microorganisms as chemical-free, safe alternatives to pesticides.

“Each one has a target pest it attacks so you have to understand the pest and what can kill it,” says Carmi. “Most of our customers are conventional growers who use chemicals when they have to, but we see a very significant reduction when they use our biologically based products. These products also help keep the chemicals effective because when you can use less the pests don’t become resistant to them.”

“We sterilize the males and distribute them over the area to control the fruit fly population; when they mate with females, nothing emerges from the eggs. It’s a matter of proportion between sterile and fertile males, how many and where, so it’s a complete solution and not just a product,” says Carmi.

The same small planes that once sprayed toxic chemicals on fields and groves are now being repurposed to distribute sterile male fruit flies from BioBee in many countries, including Jordan and Croatia.

“This completely ecofriendly organic biological agent penetrates the roots and extends them in an underground web in order to access and absorb nutrients otherwise unavailable to the plant,” says Groundwork BioAg cofounder and vice president of sales and marketing Dan Grotsky.

“This is how plants have been growing in nature for millions of years. We’re just producing the fungi cost-effectively using a unique production process.” 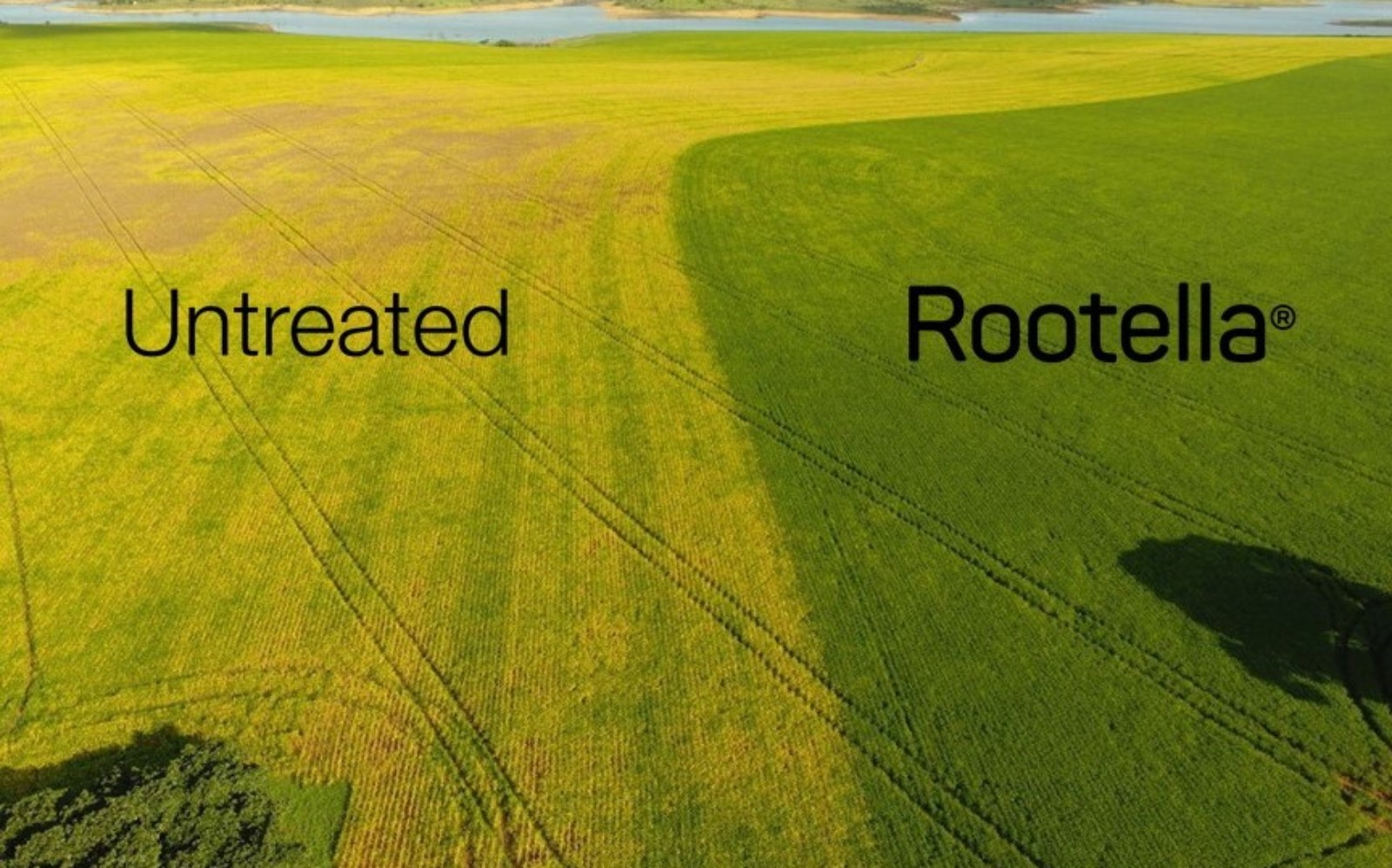 Aerial photo of a soybean field in Brazil, half treated with Rootella and half not, after 20 days without rain. The treated plot yielded 21.6% more than the untreated one. Photo courtesy of Breno Teles/Ativa and NovaTero

The Rootella seed treatment and additional product lines are made in Israel for worldwide customers, who include farmers in North America, Brazil, India and Ukraine.

Grotsky explains that the Rootella seed treatment is primarily for row crops. Most row-crop seeds come pretreated with chemical fungicides. Rootella allows growers to add live mycorrhiza on the seeds “as a slick little film coat.” It is compatible with almost any chemical seed treatment on the market, and may be applied together on the same seed.

“Our mycorrhizal products are at the heart of regenerative agriculture,” says Grotsky, noting that the products meet several UN Sustainable Development Goals.

One reason that agriculture consumes 70% of global water resources is the wasteful practice of flood irrigation. This ancient method, still used in much of the world, not only wastes water. It also lowers yield, causes land and mineral degradation and contaminates water due to runoff of fertilizers.

Israel pioneered efficient drip irrigation, but it has only a 4% market share globally because many farms cannot afford the necessary electricity, pumps and filters.

This system doesn’t need filters or pumps and doesn’t require energy to accomplish precision irrigation. It even comes with a dripper that is 100% recyclable.

Now, says CEO Eran Pollak, N-Drip is also focusing on farms of just one to three acres, accounting for the majority of farms around the world. Most of these smallholders use flood irrigation.

“Covid was a driver for speeding up this second focus because of growing demand for solutions for smallholders. They are mainly in developing countries where the supply chains were interrupted during the pandemic and people are left without food,” Pollak tells ISRAEL21c.

N-Drip is providing its system through partner companies and organizations bringing solutions to smallholders affected by the crisis.

Currently, scouting is done manually and often results in late detection of diseases and pests. As a result, growers use more chemicals and still lose between 20% and 40% of their yield.

AgroScout’s cloud-based system was beta tested last year in collaboration with the Potato Association of America and is now commercially available in North America for growers of potatoes, the fourth largest crop in the world. In a 20-minute walk, an agronomist may inspect about 150 potato plants. In a 20-minute flyover, AgroScout can cover 10,000 potato plants in 125 acres.

The system will be tested in the future on other open field crops such as corn, soy and wheat.

Founded in 2017, Greeneye is developing a platform using artificial intelligence and cameras to detect and kill weeds with a selective spraying system.

This would reduce the amount of pesticides wasted through blanket spraying and ensure that only the weeds are sprayed – not the crops or the surrounding soil.

Greeneye recently closed a seed funding round of $7 million led by JVP with participation from Syngenta Ventures, the investment arm of the largest agrochemical producer.

While several other startups are developing similar technology, says Bocher, Greeneye’s system has the advantage of integrating with existing agricultural sprayers, sending signals to the nozzles to open selectively.

“Farmers are not excited about buying new machines,” he tells ISRAEL21c. “A more affordable solution that uses existing equipment is better. And our software works through all cycles before and after planting — and can even identify the type of weeds in the field — so the farmer can use the most effective herbicides.”

Greeneye has a demonstration unit in the Galilee (see video below) and soon plans on integrating its solution into a sprayer used in target markets including North America.

“On the business development side, a series of trials is scheduled as soon as travel is possible,” says Bocher.“We see huge interest from all relevant stakeholders in the industry.” 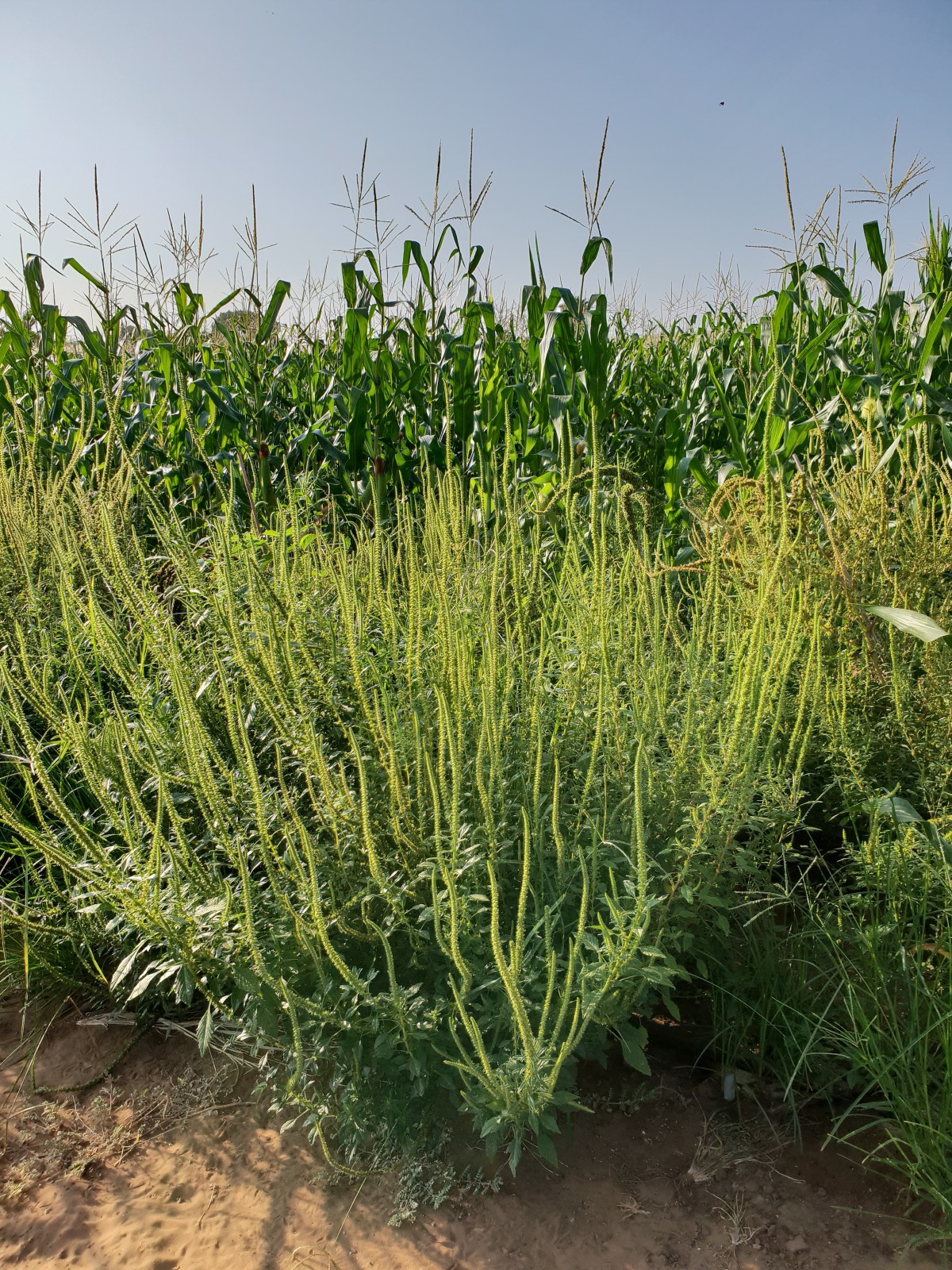 The palmer amaranth weed growing in a cornfield. Photo courtesy of WeedOUT

Palmer amaranth, beware! This weed, a major threat to corn, cotton and soybean crops, is the initial target for a novel eco-friendly biological herbicide under development by WeedOUT.

Weeds aggressively compete with crops for land, water and even sunlight. Chemical-resistant weeds like palmer amaranth plague 65% of crop growers’ fields in the US alone and cause an estimated $40 billion in global losses annually. 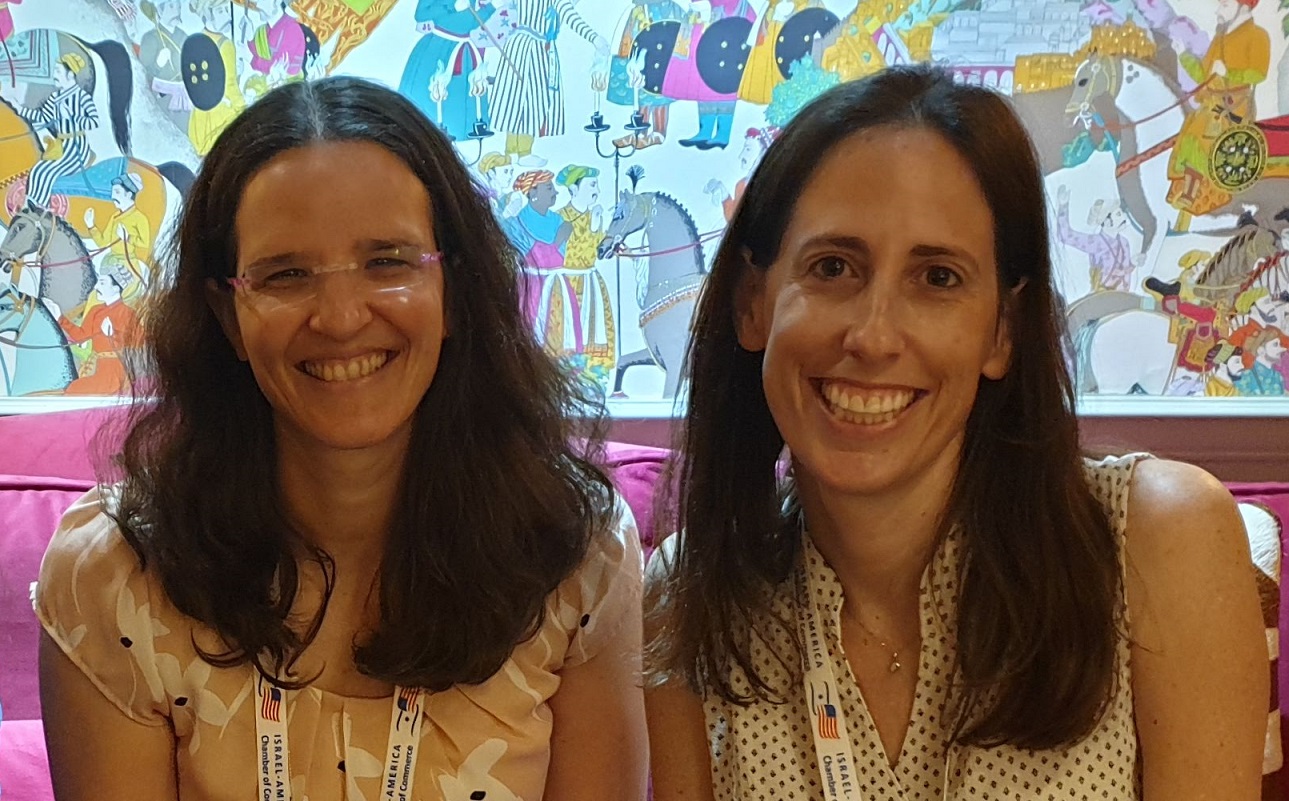 Lidor Nili has a PhD in cancer research. Her cofounder and co-CEO, Orly Noivirt-Brik, has a PhD in computational biology. They met as undergraduates at Tel Aviv University and went to the Weizmann Institute of Science for their graduate studies.

They learned about resistant weeds while working for crop bioengineering company Rosetta Green and then for Monsanto, which acquired Rosetta Green in 2013. They founded WeedOUT in 2016 to solve the problem biologically in a targeted way for each type of weed, without harming crops.

“Farmers are applying more and more toxic chemicals and that only causes more resistance,” says Noivrit-Brik. “We’re changing the reproductive system of the weeds — a totally new strategy.”

Following successful field trials in 2019 in Israel and the US, a recent funding round led by Syngenta Ventures could enable WeedOUT to progress to manufacturing by late 2022.

Bacterial diseases don’t only affect people; they also strike crops. Farmers across the globe are seeking effective, environmentally friendly alternatives to standard treatments such as copper-based chemicals. Israel’s EcoPhage is coming to the rescue.

Bacteriophages were developed in the former USSR as natural enemies of bacteria. Prof. Rotem Sorek of Israel’s Weizmann Institute of Science invented a novel technology for pinpointing the “right” phage combination to fight specific bacterial diseases.

Sorek’s platform was licensed for the pharma industry, and now EcoPhage is taking it to agriculture. The company is led by Orly Savion, who has a PhD in molecular cell biology and structural biology and formerly led business development at Yeda R&D, the Weizmann’s tech-transfer arm.

Phage treatments for agriculture aren’t easy to develop — the phages must be robust enough to work in field conditions and each must be matched computationally to kill specific bacteria. Furthermore, the solutions must meet biological regulation standards.

If EcoPhage is successful, this treatment would give the added benefit of leaving beneficial microorganisms in the soil untouched – in the same way that targeted chemotherapy kills cancerous cells and not the surrounding healthy cells.

Established through the Bayer-Trendlines Fund in 2018, IBI-Ag is developing environmentally friendly, cost-effective, potent biological solutions to control insects without chemical pesticides. A selective mode of action targets only the specific pest.

The startup was cofounded by Rony Oren Benaroya, who has a PhD in agriculture and more than a decade of R&D experience in biotech start-ups; and Prof. Amir Ayaliof Tel Aviv University’s School of Zoology, who researches insect physiology, neurobiology and behavior and has developed novel approaches to fight locusts.

“With insects causing billions of dollars of damage annually, the agricultural market is still largely dependent on synthetic pesticides for crop protection, despite their toxicity and reduced efficacy because of increased insect resistance,” the founders said.

“As chemical insecticides become less effective and are subject to increasingly stringent regulations, growers are more willing to try biological options because they cost less and offer a greener, more effective option.”

Today, biopesticides make up 5% of the $3 billion crop-protection market. That percentage is projected to increase to more than 7% by 2023, when the market could reach an estimated $4.5 billion.