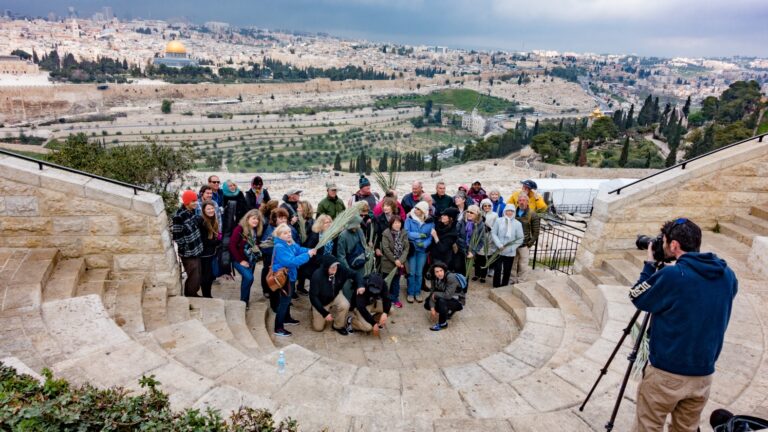 A photographer capturing a photo of a group of tourists on the Mount Olives with the Old City of Jerusalem in the background. Image via Shutterstock.com

Israeli Minister of Tourism Yariv Levin is celebrating “an amazing and historic” 2018 in which the country welcomed a record-breaking 4,120,800 million incoming tourists.

“This achievement is a result of a revolutionary change in marketing strategy; infrastructure development; opening direct routes from new destinations; and creating collaborations with some of the largest travel agents in the world,” Levin remarked upon releasing the final numbers on January 6, 2019.

The number of tourist entries recorded between January and December 2018 represent an increase of about 14 percent compared to the same period last year, and 42% more than in 2016. Revenue from tourism in 2018 reached about $5.8 billion.

According to the Tourism Ministry and Israel’s Central Bureau of Statistics, returning tourists accounted for 40% of that total. In 2018, 61% of all tourists were Christian, 22% Jewish, 12.1% unaffiliated and 1.8% Muslim.

Tourism Ministry Director-General Amir Halevi said the opening of the new international Ramon airport near Eilat on January 21 is expected to help make 2019 another record-breaker for incoming Israeli tourism.

UNCOVER ISRAEL - Get the ISRAEL21c
Weekly Edition free by email
Sign Up Now!
Bring Israel's story to life.
Millions of people around the world rely on us to gain a deeper understanding of Israel. We are the trusted source for original content you won't find anywhere else.
You can make a difference. Donate today to support journalism that brings Israel’s story alive.
SUPPORT ISRAEL21c
Read more on:   News, tourism