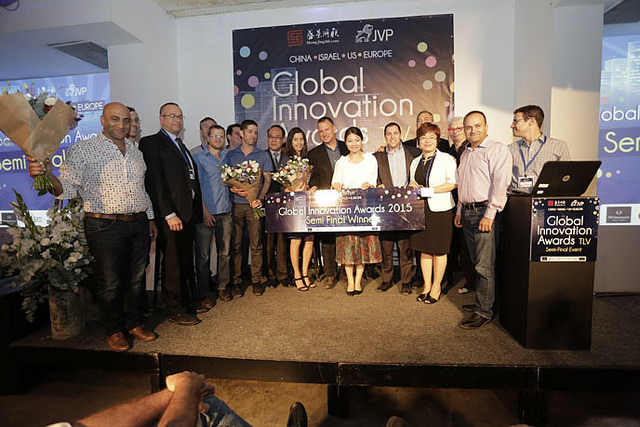 Three Israeli startups — Wayerz, DiaCardio, SecuriThings – are heading to Beijing this August to compete for a $1 million grand prize in the Shengjing Global Innovation Awards 2015 contest. The blue-and-white companies will compete against startups from the US, Europe and China for prizes worth a total of $1.5 million, the opportunity for investment from a special $25 million fund established by the Shengjing Group especially for the competition, and exposure to Chinese tech giants like Alibaba, Baidu and Xiaomi.

“In China, they are interested in investing a great deal of money and resources into the kind of innovation that Israel has been blessed with. The connection between China and Israel is a recipe for success,” said Han Jun, Science & Technology Counselor of Chinese Embassy to Israel.

The Beijing finals are part of the Zhongguancun International Entrepreneur Festival.

The Global Innovation Awards were established by leading Chinese management consulting firm Shengjing Group and are taking place in China, the US, Europe, Latin America and Israel. The Israel segment of the competition was led by VC firm JVP.

Some 180 Israeli startups entered the Israel stage of the global competition, nine made it to the semifinal competition, and three were selected as winners: Wayerz, an integrated platform that optimizes international bank wiring, correspondent inter-bank reporting, and reconciliation; SecuriThings, an IoT Security Platform which easily integrates with IoT manufacturers and platforms to protect against illegal access to devices; and DiACardio, a software company revolutionizing the practice of “echocardiography” (Ultrasound of the heart).

“The competition is part of a new strategic cooperation between JVP and Shengjing to promote investment in Israeli startups and to promote Israeli startups in the Chinese market,” said JVP Managing Partner Kobi Rozengarten. “Israel creates leading companies in technological development and innovation, and that is exactly what the Chinese are looking for. The Israeli finalists come from areas in which Israel is considered a world leader. I wish them much luck and am sure they will make us proud.”

“The Israeli market is of great interest to us,” said Sherrie Wang, Senior Partner at Shengjing. “We have invested $50 million in Israel already and we are only beginning. This competition is very important for us because it connects us directly to the Israeli startup industry and brings the startups directly to China. Many Chinese investors joined in on the initiative after hearing that Israeli startups would be coming to China. Opportunities for these Israelis in China are enormous and we will open doors for them.”