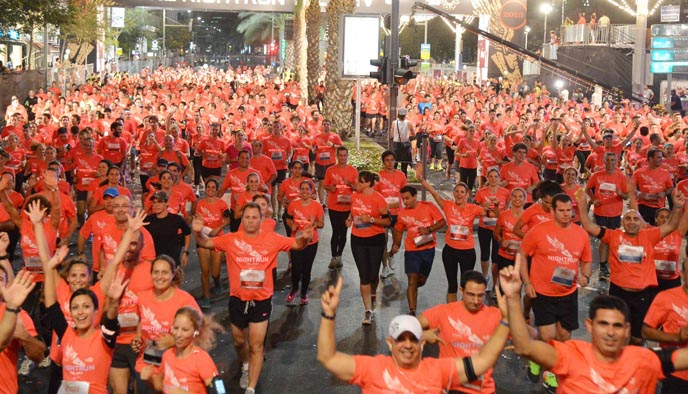 Some 25,000 runners will don sports shirts, accessorized with glowing neon lights, and take to the city streets tomorrow (October 20) for the 2015 Coca Cola Zero Night Run Tel Aviv. This is the ninth consecutive year that the 10-kilometer race — a part of the Municipality’s strategy of advancing a healthy lifestyle — is taking place.

“Tel Aviv is the Nonstop City: there is much more to see here at 3am than at 3pm. There is no better place in the world to hold a race at night,” says Hila Oren, CEO & Founder of Tel Aviv Global.

For the first time ever, the race will include lighting elements such as installations, LED ports and large-scale screenings. Every runner will be granted a kit of glowing elements to enhance the experience.

Leading deejays will play music throughout the course and the event will conclude with a party at the Yarkon (Yehoshua) Park.

“Tel Aviv is a city which loves, respects and encourages sports. The night run is a long-standing tradition but for the first time this year we are bringing the runners into the thriving heart of the city, to allow the thousands of runners an urban run along the main streets. Just like the Nonstop City’s values, the night run is an opportunity to work out and have fun at the same time,” says Ron Huldai, Mayor of Tel Aviv-Yafo.