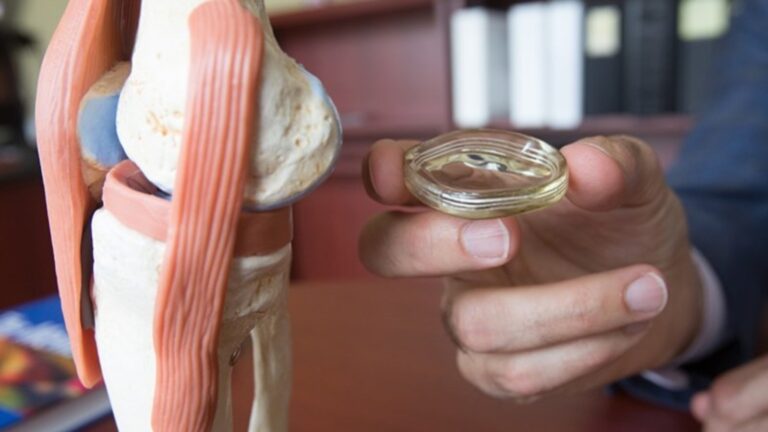 The world’s first artificial meniscus – mimicking the tissue pad between the thigh and shin bones – is now available commercially in Israel as well as in Europe.

The NUsurface Meniscus Implant from Active Implants was implanted in two patients by surgeons who have been involved with the product’s development since 2006.

“The NUsurface Implant was invented and developed in our R&D center in Israel, so for us it is very exciting to finally bring the device to people in Israel,” said Ted Davis, president and CEO of Active Implants.

Headquartered in Memphis, TN, with R&D in Netanya, Israel, Active Implants has spent the past 10 years doing clinical trials of the investigational NUsurface Meniscus Implant – the first “artificial meniscus” designed to replace one that is damaged or deteriorating.

“The NUsurface Implant has been extensively studied in clinical trials in Israel, Europe and the US,” Arbel said. “The implant is designed for patients who still have persistent knee pain following a meniscus surgery, and it is ideal for those who have exhausted other treatment options but are too young for total knee replacement.”

In September, the FDA granted a Breakthrough Device Designation to the NUsurface Meniscus Implant. This designation expedites the development and review process for certain medical devices.

The NUsurface Meniscus Implant is inserted into the knee joint through a small incision. Patients typically can go home soon after the operation. The implant is made from medical-grade polycarbonate-urethane plastic and does not require fixation to bone or soft tissues.

“Filling the gap in treatment options between minimally invasive meniscus repair and total knee replacement is a large unmet need in the orthopedic market,” said Davis.

The company’s Tribo Fit Hip System received the European’s CE Mark in 2006 and is marketed outside the US via a distribution agreement with Joint Replacement Instrumentation.