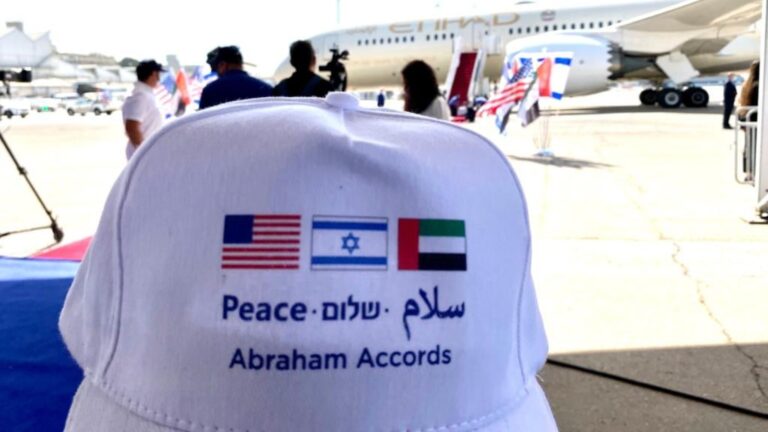 “We are making history in a way that will stand for generations,” Prime Minister Benjamin Netanyahu said upon the first official visit from the United Arab Emirates on October 20.

An historic trilateral summit was held at Ben-Gurion International Airport with delegations from the UAE and the United States.

“This is your first visit to Israel and because of the corona limitations, we cannot show you our beautiful country but I expect to have many more visits so that we can [get to] know each other,” said Netanyahu. “I already invite you to an additional trip as soon as this corona disease disappears from our world, and with our collaboration it will disappear faster.”

The Emirati leaders revealed plans to open an embassy in Tel Aviv.

US International Development Finance Corp. CEO Adam S. Boehler announced the establishment of a $3 billion trilateral regional development fund based in Jerusalem, focused on projects “that promote economic cooperation and prosperity in the Middle East and North Africa.”

Four agreements signed by Israeli and the UAE government ministers at the summit provide for: the advancement and protection of investments between the two governments; future cooperation in science and technology; mutual direct civilian flights and flights through Abu Dhabi connecting Israelis to Asian destinations; and a mutual exemption on visas for both tourist and business travelers.

The delegation also toured an Israeli space technologies exhibition set up at the airport in their honor.

Happening now! Join us live at a special exhibition featuring the latest Israeli space technologies. The delegation from the UAE visited the exhibition today.

The summit capped an historic week. On October 13, the first cargo ship from Abu Dhabi docked in Haifa, bearing iron, firefighting equipment, cleaning equipment and electronic equipment. Weekly shipments from the UAE are expected to lower the cost of living in Israel, as imported items from afar carry high tariffs.

On October 18, two planes took off from Israel – one with the first official business delegation to the UAE and the second with US Treasury Secretary Steve Mnuchin and Israel National Security Council head Meir Ben-Shabbat to Bahrain, where eight MoUs were signed regarding future cooperation.

On October 19, the first commercial flight of Etihad Airways, the national airline of the UAE, arrived in Ben-Gurion International Airport. The Emirati crew descended from the Boeing 787 Greenliner waving UAE and Israeli flags.

“If someone had told me a few months ago that I would stand and make a speech here in Tel Aviv, I wouldn’t have believed it,” said the plane’s captain, Abdallah Salah. “But our heroic leaders have made it possible. I hope the day will come when all people live in peace and harmony.”

Etihad Airways | The dawn of a new era