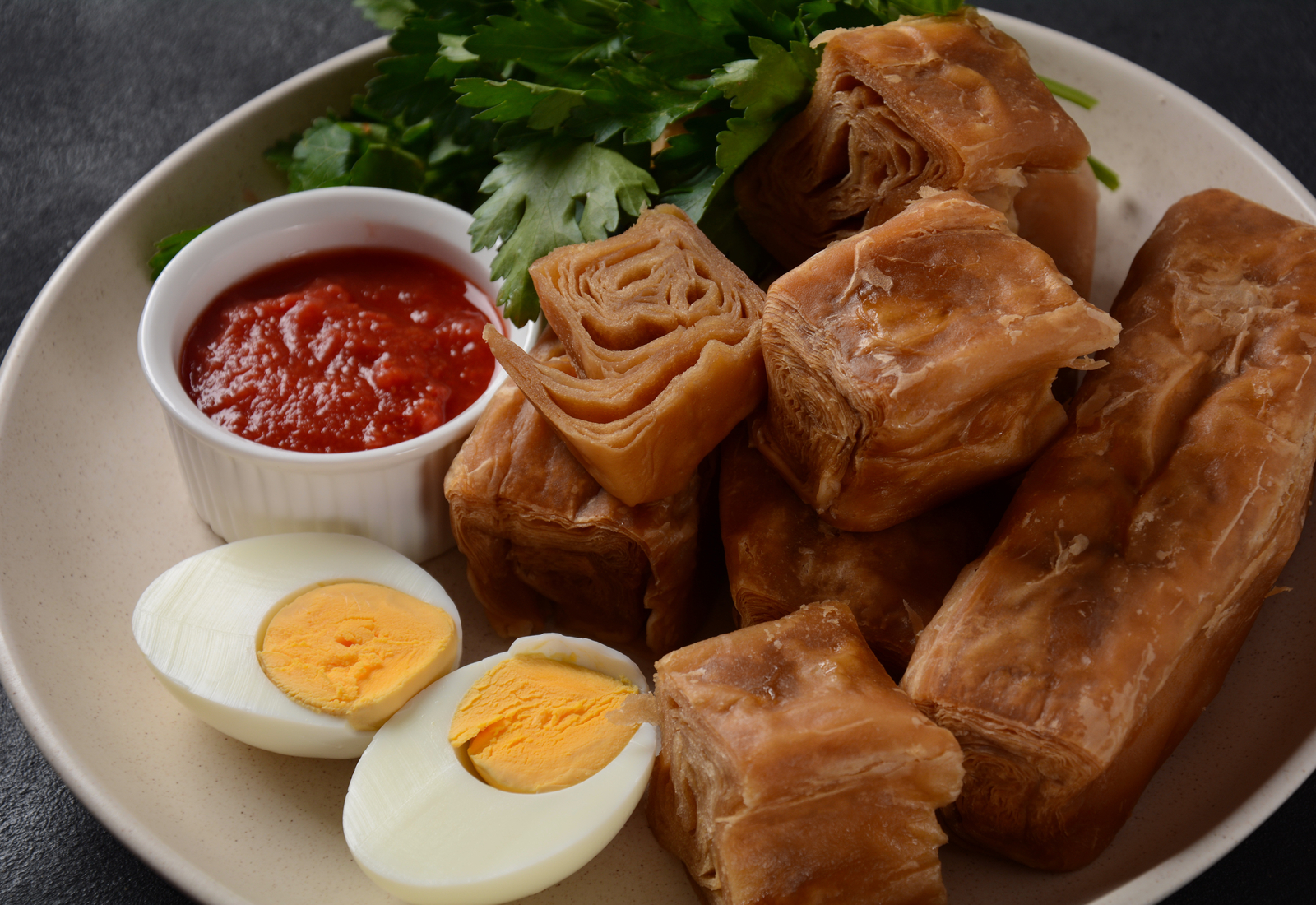 From spicy condiments and flaky pastries to date honey and aniseed liquor, this is the year for you to try Israel’s most delicious foods.

Over here at ISRAEL21c, we’ve decided to turn still being stuck at home come 2021 from lemons into lemonade. Or rather, limonarak, the ultimate Israeli drink made of potent arak liquor and the aforementioned fruit.

In other words, we’re going to be utilizing the fact that we have more time on our hands, and fewer places to go, to get into the kitchen and try making the ultimate Israeli foods.

We recommend you do the same, or at least that you find a nearby vendor from whom to purchase these yummy goods.

We’re branding all the below deliciousness “Israeli” despite fully knowing that except for one or two items they originate elsewhere. But that’s exactly the beauty of Israeli cuisine – the country’s diverse population means that foods from all over the world have become absolute staples in our kitchens. It’s this experience that we wish to share with you. Enjoy! 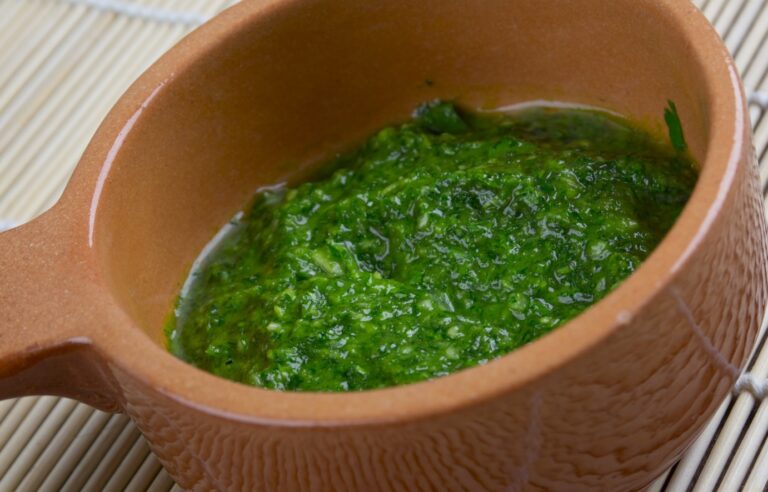 A fiery condiment originating in Yemen, zhoug comes in either green or red – depending on the type of hot peppers that are used to make it. These hot peppers are complemented by garlic, salt and cilantro, which are all pounded together to make a breathtakingly hot paste.

Often sold in little bottles (a little goes a long way), zhoug immediately improves anything it’s added to such as falafel, hummus, French fries and a personal favorite – grilled cheese sandwiches. It’s also not that difficult to make, as you can see from the recipe here. 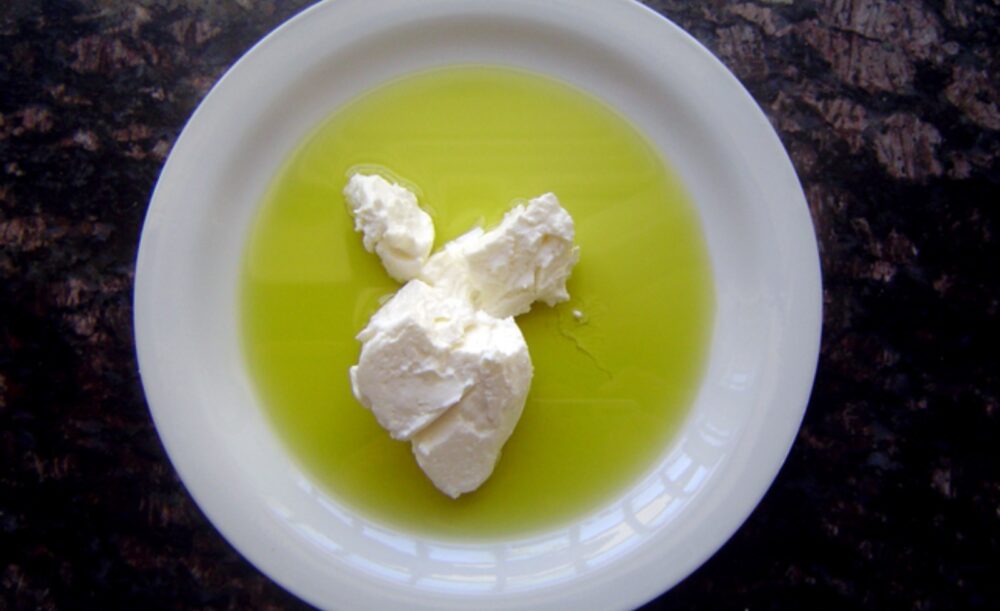 A perfect partner for zhug is labaneh, or strained yogurt. Popular across the Middle East, labaneh is served in a similar way or in addition to hummus as part of a mezze table.

Sometimes the dip is shaped into little balls covered in olive oil and spices that are sold in glass jars and can make a wonderful gift. But while this version requires certain skills and patience, the basic dip could not be easier to make. Just place yogurt of your choosing (from cow, goat or sheep’s milk) in a clean piece of cloth, tie it up and leave it hanging off the tap in the kitchen sink. By morning, you’ll be left with a creamy strained substance that’s just waiting to be devoured.

The origins of sabich (pronounced sa-beekh) lie in the traditional Shabbat breakfast enjoyed by the Jews of Iraq. When they immigrated to Israel, they brought along this delicacy and it took off in the country as a fast-food lunchtime favorite.

Originally, sabich included potatoes, hard-boiled eggs, fried eggplant, tahini, pickles and chopped parsley, but in Israel it got stuffed into pita bread (obviously) – a move that no doubt increased its popularity and made it readily available on many street corners.

If you, like us, are trying to lose some of that quarantine weight, may we recommend that you give a simple Israeli chopped salad a chance. Called “Arab salad” in Israel, it’s usually made of thinly diced cucumbers, tomatoes and onions. Sometimes peppers, parsley and radishes are also added, and it’s always served with a fresh lemon-and-olive-oil dressing. Absolutely delicious, and really simple to make.

Matbucha (which in Arabic literally means “cooked”) is made of tomatoes, roasted red peppers and garlic. It immigrated to Israel together with Jews from northern Africa – Morocco, Tunisia, Algeria and Libya. Each community has a different name for the salad and slightly different preparation, but the result is always fabulous – a rich and fragrant salad or dip that can be slathered on bread, added to stews or enjoyed as is, with a big spoon. 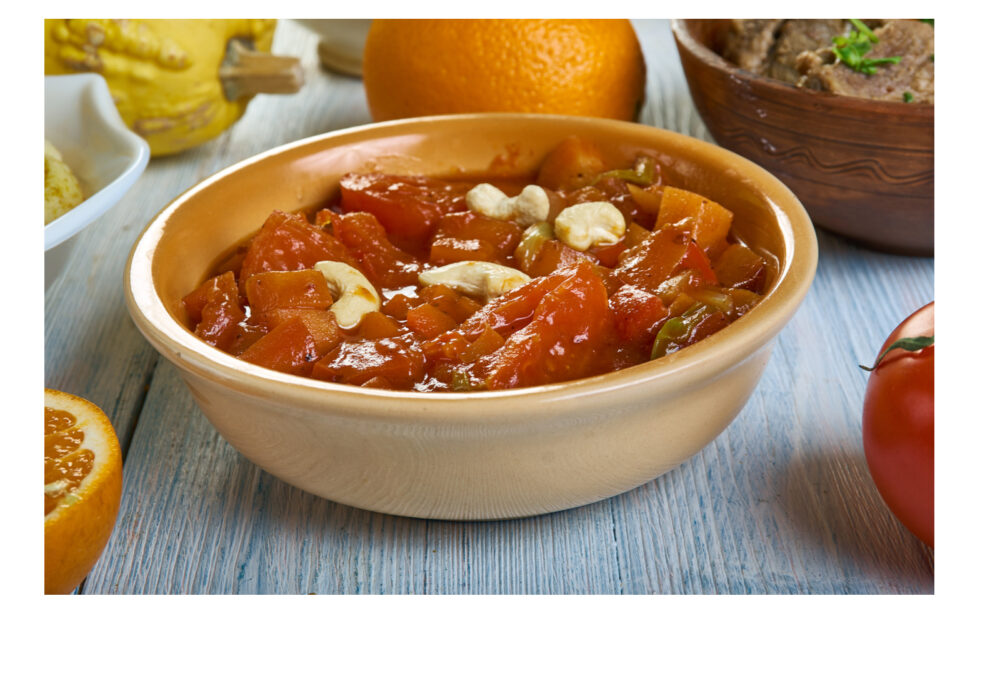 Made of tomatoes and peppers, matbucha is a popular dish in Israel. Photo by Shutterstock

One of the two completely Israeli food items on this list, ptitim were invented in the early days of Israel when Prime Minister David Ben-Gurion asked food company Osem to create a readily available substitute for rice, of which there was a shortage. From its humble beginnings, this orzo-like pasta rose to its prominent place in every household larder.

Abroad, it’s known as “Israeli couscous” and served in fancy salads and stews. In Israel it’s an everyday staple aimed mainly at kids, who wolf it down fried with a little onion or tomato sauce. We highly recommend giving it a try. 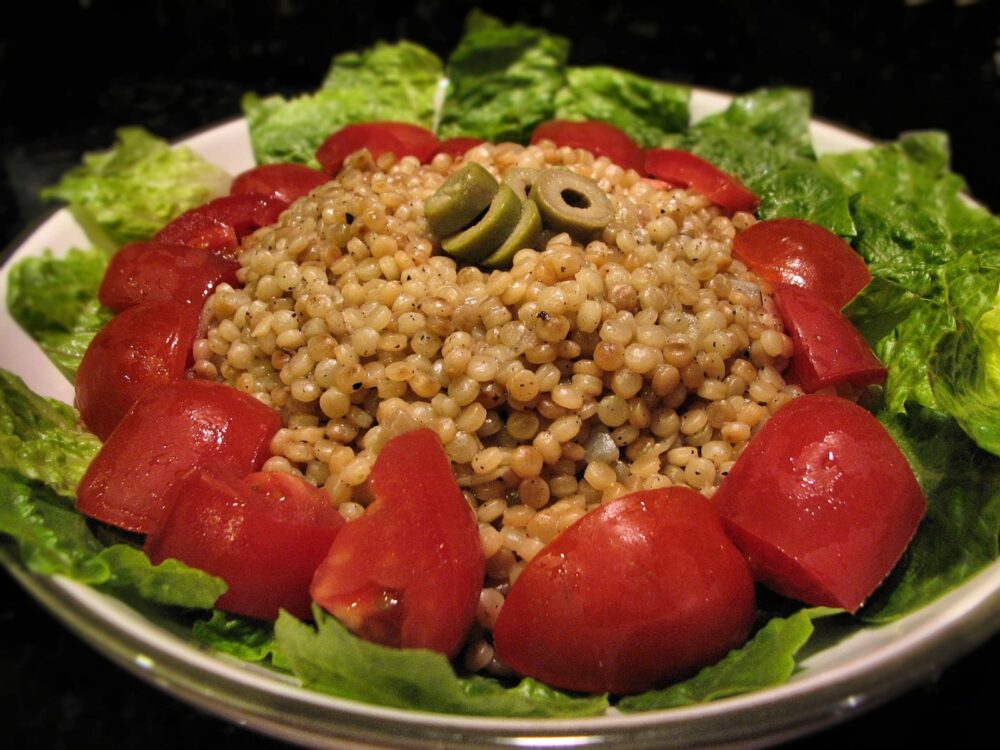 Amba is a condiment made of pickled mangoes, vinegar, salt and spices, and like sabich immigrated to Israel from Iraq in the 1950s. It’s somewhat similar to Indian mango chutneys, but is more savory, has a saucier texture and is usually spooned over breads, falafel, the said sabich or shawarma. You could make it at home, but you could also keep things simple and just purchase a jar.

Calling bourekas “Israeli” is venturing into dangerous territory, as many countries across the Balkans could also rightfully claim this flaky filled pastry as their own. Whatever its origins, bourekas are ubiquitous in Israeli bakeries in many shapes, sizes and varieties – think potato, cheese, spinach, mushrooms and even pizza. In Israel, you will never find a spread that lacks bourekas — in office meetings, at schools, at weddings and even at shivas. Because there’s nothing a bit of pastry can’t make better.

Largely believed to originate from North Africa, shakshuka is an egg dish that most Israelis probably have at least once a week. It’s perfect for breakfast, dinner and especially brunch, and traditionally involves eggs nestled in a spicy tomato sauce, cooked on the stovetop until just set. However, you can also get “green” shakshuka based on leafy greens and cheeses, or even vegan ones with egg substitutes. Whatever your preference, this truly is the perfect dish for any occasion. Just don’t forget bread to mop up all the sauce.

Aside from being a delicious bread, Jerusalem pretzels – called beigaleh in Hebrew – have little to do with their New York counterparts. They’re larger, thinner, slightly chewier and come covered in sesame. They’re usually sold with little parcels of za’atar to dip the bread into. For a similar experience, look for simit bread at your local Turkish eatery. 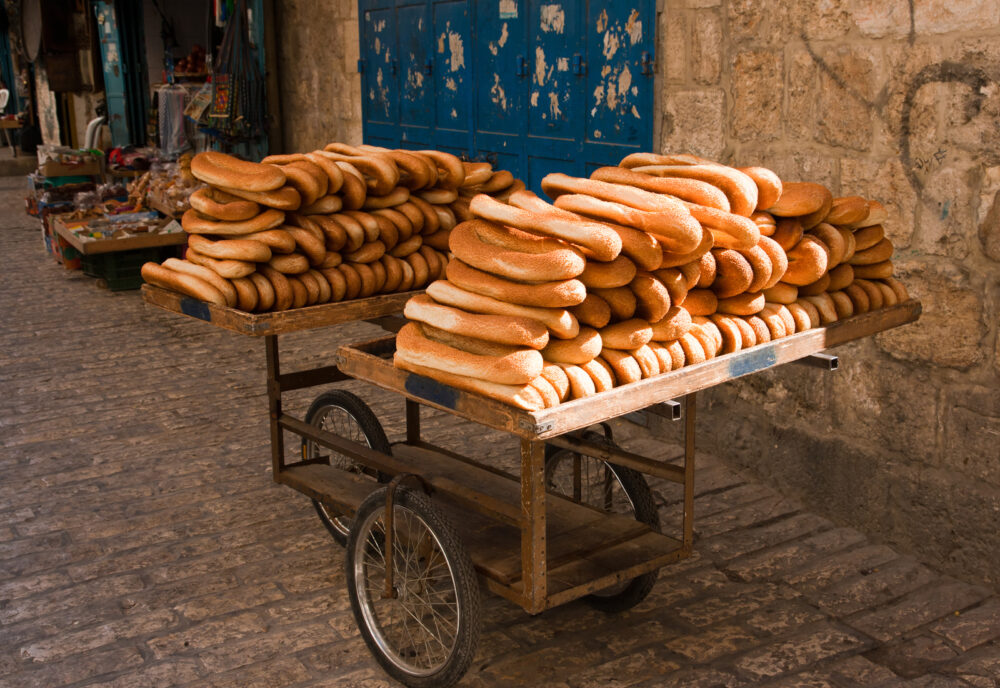 A cart of Jerusalem pretzel on sale in the Old City. Photo by Shutterstock

For many Israelis, a Yemenite jachnun is the ultimate Saturday morning breakfast. Just think sweetish, thick dough covered in mounds of butter and left to bake overnight in a designated round pot. Come morning, it’s served warm with a chopped tomato sauce, hard-boiled eggs and zhoug. And it’s heavenly. And a lot of work, which explains why most people have their favorite secret spot from which to purchase one (or a dozen). 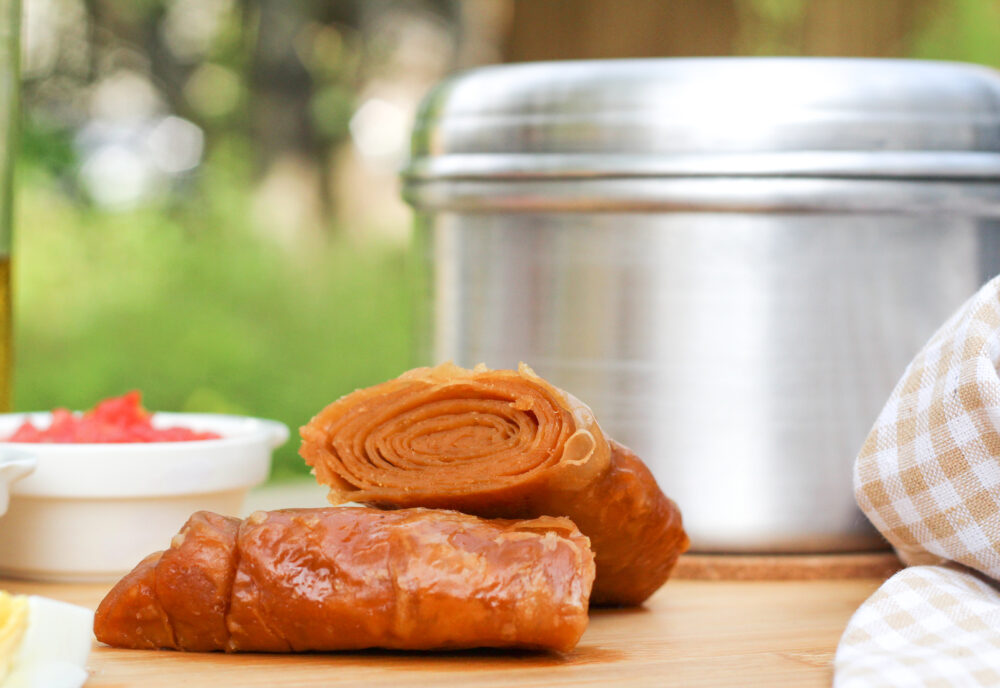 Silan, or date honey, has become increasingly popular both in Israel and abroad over the past years thanks to its superb flavor and the fact that it’s not as processed as sugar. It’s a staple of Middle Eastern and Persian cuisines and can be used in such varied ways – its complex yet sweet flavor makes it a great choice for drizzling over yogurt, adding to savory marinades and mixing with a bit of tahini and spreading over toast. 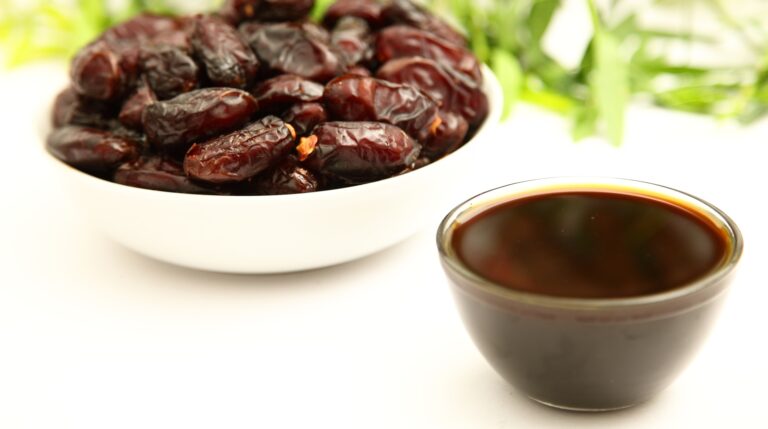 Popular throughout the Eastern Mediterranean – think Israel, Syria, Lebanon and Jordan – arak is an aniseed-flavored spirit similar to raki, pastis and ouzo that you can either love or hate, with no in-betweens. While yours truly resides in the latter camp, arak is enjoyed by millions of others who mix it with a little water and ice that turn it a milky white, use it to make fresh cocktails such as limonarak or, even worse, drink it straight up in shot form. Proceed with caution. 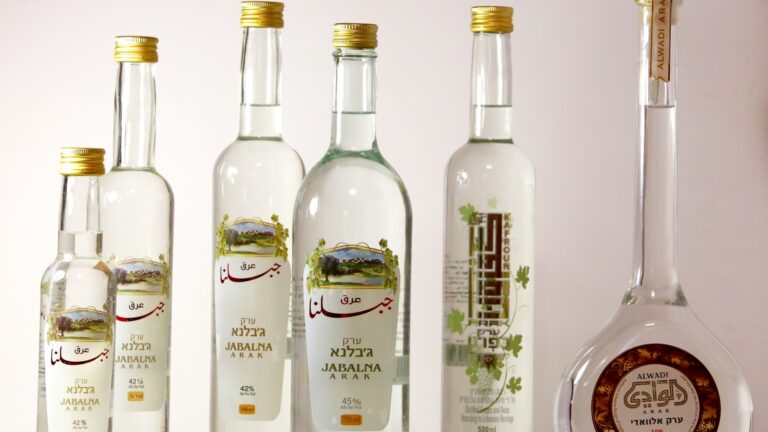 Sachlav is a frothy milk drink that’s enjoyed throughout the Middle East, and for good reason. It’s warm, thick, sweet and comes with pistachio, cinnamon and coconut toppings. Traditionally, it is made from ground orchid bulbs that nowadays are usually substituted by cornstarch, sugar and in some cases rosewater. Either way, it is delicious and very simple to make. 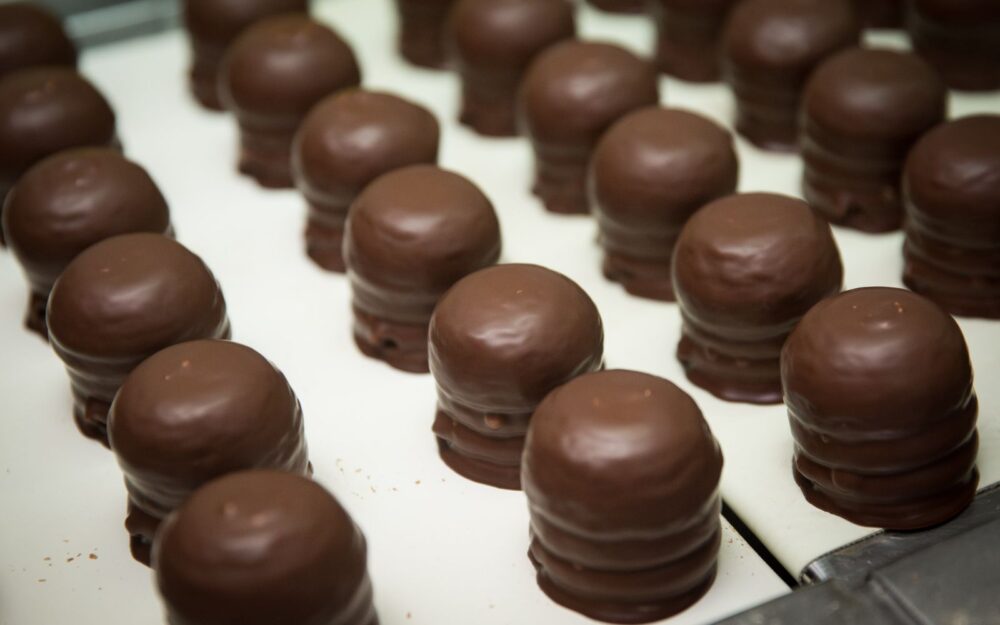 Last but not least on our list is Krembo, the ultimate Israeli winter snack and one of the only foods that is genuinely Israeli. It’s comprised of a round biscuit base topped with a white chewy meringue nest that’s in turn covered in a thin coating of dark chocolate. It is as yummy as it sounds.

The traditional Krembo is mass-produced and appears on supermarket shelves only in winter months. But recent years have seen artisanal Krembos popping up at patisseries across the country, in what can only be described as a welcome development.