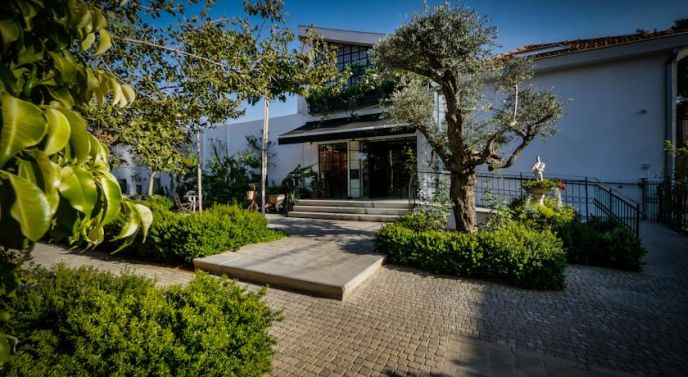 The garden of the Varsano Hotel, soon to be a family residence.

The Neve Tzedek neighborhood of Tel Aviv is on every visitor’s itinerary. Its beautiful Bauhaus buildings, trendy cafés, fashion shops, boutique hotels and dance center make it a draw for many. It now seems that the neighborhood-by-the-sea is also an unofficial billionaires’ hotspot.

Roman Abramovich, Russian tycoon and owner of the Chelsea football club in London, made headlines across Israel last week when it came to light that he plans on turning the Varsano Hotel in Neve Tzedek into his Israeli residence. Abramovich paid a reported $25 million for the 19th century building.

The New York Times called the 1,500-square-meter Varsano boutique hotel “an amazing and stylish place to stay.” The hotel consists of a main building with a lobby, dining room, two studio suites and six bedrooms in three separate villas in the property’s gardens. Of course, visitors will now be stuck gawking from the outside of this soon-to-be former hotel.

Abramovich had been looking to buy a property in the area since 2008, after a failed bid for the Chelouche House, once the residence of the founding family of Neve Tzedek.

In 1883, the Chelouche family, who wanted to escape the sewage problems and disease of Jaffa, moved to Neve Tzedek. The neighborhood was officially established in 1887 when 48 other families moved in.

Abramovich, it would seem, is not the only billionaire with real estate in the gentrified neighborhood.

“For regular homes the price tag is on average about NIS 50,000 per square meter. But occasionally there is an exceptional deal involving a special property, if it is a particular size, or a very special location in the neighborhood, the price per square meter can jump to as high as NIS 100,000,” Oren Katz, a real estate agent who specializes in high-end properties in the neighborhood, told Globes.

The rise-and-rise of this area that until the 1980s was a slum neighborhood, and once in danger of being razed to the ground by the municipality, makes for a great story from its days as the first Jewish neighborhood built outside the port city of Jaffa to one of Tel Aviv’s most expensive suburbs today.

“There are at least 15 billionaires in the neighborhood who have private jets and they sit around in the synagogues in shorts and t-shirts and talk with the elderly people there who haven’t got the slightest idea that they are billionaires. They’d never walk around with a suit or attaché case on Shabazi Street [the main street of Neve Tzedek]. It’s a neighborhood with the grandest of homes alongside old houses and alley cats. That’s the uniqueness of the place,” Katz told Globes.

Many of the buildings in the neighborhood are preserved properties (including the Varsano Hotel).

The neighborhood is also a cultural center of Tel Aviv with the Suzanne Dellal Dance Center located here, as well as the Nahum Gutman Museum and Rokach House Museum.

Earlier this year, the Daily Mail reported that Madonna and Natalie Portman were in talks to buy apartments in the luxury Meier-on-Rothschild complex in the area.

“The neighborhood is different firstly because of its history. Even the properties that are not slated for preservation are still subject to municipal restrictions. So even if you build a new house you still have to adapt it to the neighborhood’s character. Many entrepreneurs and private individuals complain about the difficulties the municipality makes but I think it is right that they protect the special fabric that might otherwise disappear,” said Katz.