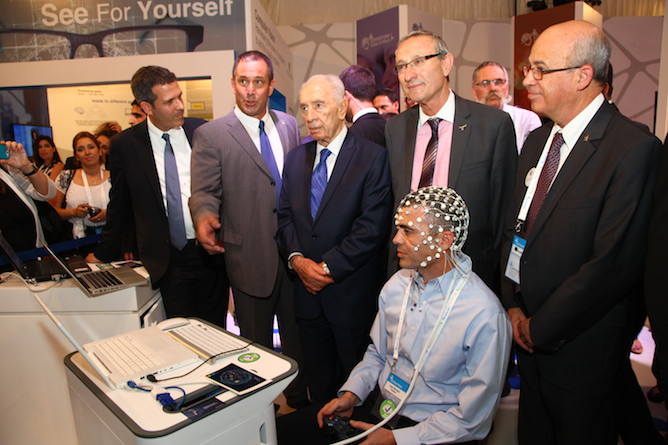 The four Israeli companies invited to present their futuristic technologies in front of 14,000 attendees of the 2014 AIPAC Policy Conference in Washington last week received an enthusiastic response from the largest gathering of America’s pro-Israel community. Jews, Christians, African Americans and Latinos from all 50 states were in attendance, including thousands of college students.

The Israel Innovation Showcase has become a favorite highlight of twice-yearly AIPAC national events (https://www.israel21c.org/blog/behind-the-scenes/israel21c-feature-stories-star-in-aipac-innovation-showcase/). ISRAEL21c’s Nathan Miller was at the Policy Conference to speak with the four executives, whose groundbreaking companies have all been featured on ISRAEL21c for their potential to improve lives.

“We are overwhelmed by the positive reaction and interest,” ElMindA CEO Ronen Gadot told Miller.

The 32-person company, in R&D mode since 2006 and poised for commercialization this year, just completed large clinical studies to validate its technology – a non-invasive functional brain mapping to diagnose and monitor cognitive impairments such as in Alzheimer’s and Parkinson diseases, ADHD, brain injuries and other neurological disorders affecting millions of people.

“We have filed with the FDA two years ago, and are in advanced review by the agency,” Gadot said. “We are preparing an infrastructure to market our tools in the US and Canada. We are positioned as an international company because our market is global, and we have many partners in the US — industry, pharmaceutical companies, universities, medical schools and hospitals.”

ElMindA was one of the “wow” technologies demonstrated to President Obama during his March 2013 visit to Israel due to his interest in advancing brain science – an interest shared with Israeli President Shimon Peres.

“Focusing on a variety of indications, we are working toward a reality where our brain health will be much more closely monitored so disease can be diagnosed earlier and treatment will be more effective,” said Gadot, adding that this has relevance for everyone – from kids with developmental disorders and concussion, to the early detection of our own cognitive impairment, or dealing with parents suffering neurodegenerative diseases such as  Alzheimer’s and Parkinson’s.

AIPAC delegates were lined up at ElMindA’s booth for free demo brain scans. “I didn’t realize how many doctors and neurologists would be here, and they want to test drive this in their clinics,” said Gadot. “It’s been an amazing experience.”

Everyone wanted to try it

Turning to water technology, TaKaDu founder and CEO Amir Peleg demonstrated his company’s “add-on” software solution to help municipalities and companies detect water leaks and save some of the $15 billion lost each year due to leakage in the carrier infrastructure.

“We showed live what we can do for leaky systems,” Peleg told Miller. “The response was overwhelming – unbelievable — not only because what we do is special and unique and easy to understand, but because the crowd here is so supportive of Israeli technology.”

During his two days at the Policy Conference, Peleg was approached by potential customers, such as the owner of a soft-drink factory; by movers and shakers who want to help open doors for TaKaDu in the United States; and by students inspired by the company’s green mission.

Peleg predicted that if TaKaDu could help utility companies conserve one-third of the water flowing through the pipes that is now wasted, their impression of Israel will be radically changed. “Every time I have an interaction with a foreign company,” said Peleg, “I’m sure they are one notch more friendly to Israel than before.”

Erez Naaman, vice president of business development and engineering at OrCam, presented the company’s assistive device for people with vision impairment, in development for the past three and a half years.

“It’s a smart camera that sees for them, understands what it’s looking at and tells them discreetly in their ear,” he explained to Miller. Based on an invention by Prof. Amnon Shashua, OrCam’s invention is built into a tiny computer that clips onto a pair of eyeglasses.

“We came to AIPAC to help us reach the American public,” said Naaman. “And everyone’s been incredibly supportive. I was quite surprised at how deeply it touches people to see an actual user of the device, to appreciate what it does for them. A few people wanted to purchase one right here.”

Others at the conference told him about relatives whose lives could be changed by the OrCam device, which is in a pre-launch phase with its first paying customers.

“We’re here to help and we want people to know it,” said Naaman. “The coverage we’ve been getting is crucial in getting the word out to our public, who don’t consume mainstream media.”

Amir Be’eri, founder and CEO of Camero, explained the capabilities of his company’s security cameras with advanced micro-power radar technology that can “see” through walls to provide real-time surveillance of concealed stationary and moving objects.

“We were proud to be selected to present at AIPAC among the many technologies in Israel,” Be’eri told Miller.

“We are getting a fantastic response. Everyone is astonished to see such Israeli technology in use. The United States is our biggest market, and we make something that can literally save lives in rescue operations, drug raids, urban combat, high-risk arrest and many other applications. We can show Israel has great ideas that can be used all over the world.”

UNCOVER ISRAEL - Get the ISRAEL21c
Weekly Edition free by email
Sign Up Now!
Bring Israel's story to life.
Millions of people around the world rely on us to gain a deeper understanding of Israel. We are the trusted source for original content you won't find anywhere else.
You can make a difference. Donate today to support journalism that brings Israel’s story alive.
SUPPORT ISRAEL21c
Read more on:   camero, ronen gadot, OrCam, AIPAC, ElMindA, TaKaDu, Israeli innovation, Technology, Gadgets, Innovation, Uncovering ISRAEL21c