Lighting up the night at Hanukkah. Photo by Hadas Parush/Flash90

Israel is a great place for people of all faiths to celebrate the winter holiday season, and especially this year when both Hanukkah and Christmas fall at the same time.

Read on to discover the best ways to celebrate Hanukkah and Christmas right here in the Holy Land, where it all began.

Jerusalem: Israel’s official public candle-lighting ceremony, attended by some of Israel’s most important rabbis and politicians, takes place each night of Hanukkah at the Western Wall Plaza. Just steps away outside the gates of the Old City, a lively candle-lighting happens at Mamilla Alrov mall, including music and dancing. The eighth night of Hanukkah at the Western Wall in Jerusalem. Photo by Mendy Hechtman/Flash90

Tel Aviv: Dancing Camel, Israel’s first microbrewery, lights the “Molotov Menorah” each night of Hanukkah. Sip on the brewery’s seasonal Cherry-Vanilla Stout on tap, which they describe as tasting “like a sufganiya in a cup of espresso, in a pint of beer,” before, during or after the festivities. 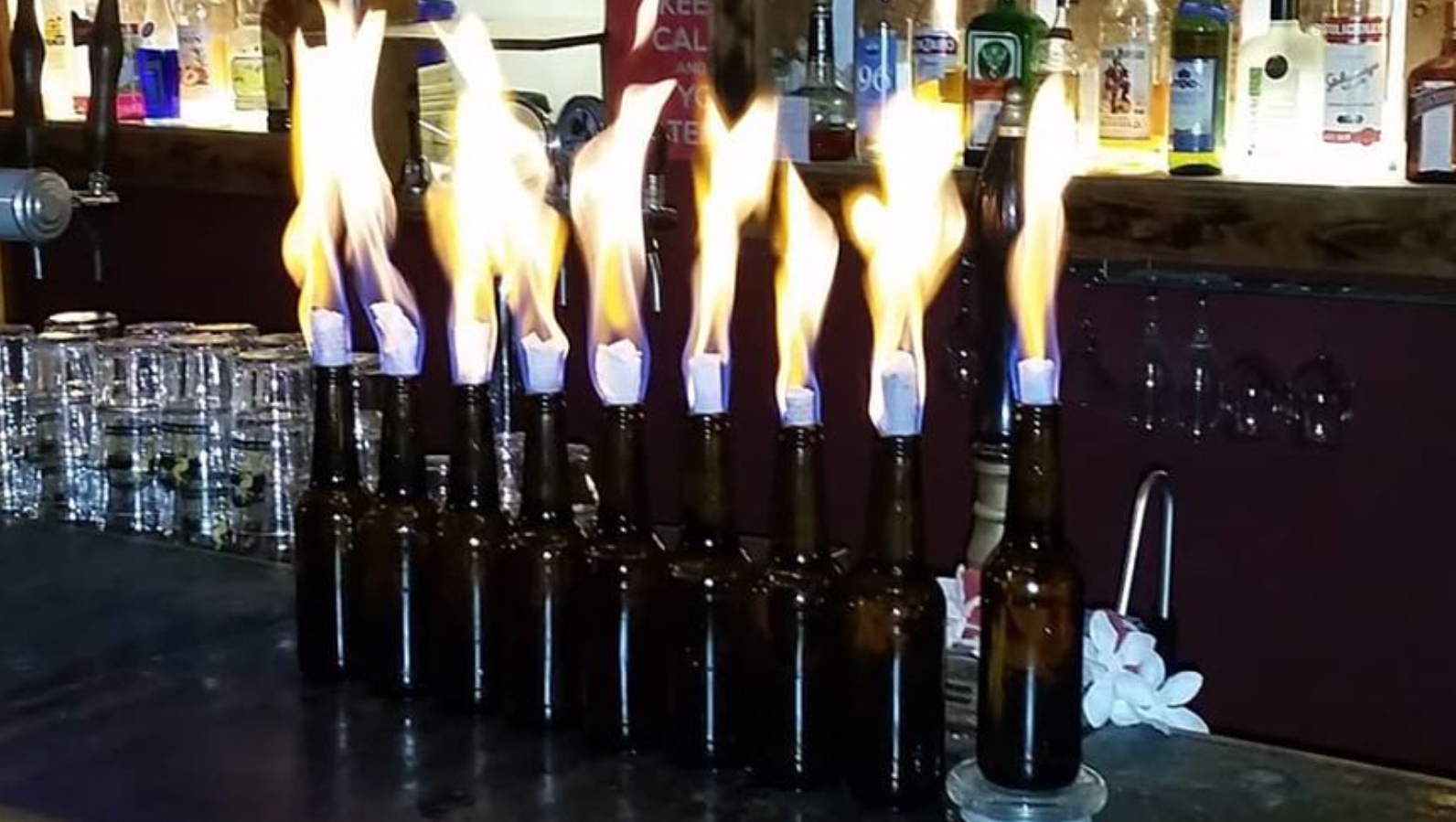 Chabad on the Coast’s Light up Tel Aviv first night of Hanukkah event takes place in Independence Park, with dancing, donuts, facepainting and other kid-friendly activities.

Stroll around the Jewish Quarter of Jerusalem’s Old City or the Old City of Safed (Tzfat) past sundown during Hanukkah (especially on the eighth night), and you will see a magical sight — glowing hanukkiyot (menorahs) in glass boxes affixed to the walls outside shops and homes and in windows.

If you want to do this in an organized fashion, sign up for a Menorah Tour in Jerusalem.

Latkes may reign supreme in other parts of the world, but in Israel it’s yeasted donuts all the way. Learn how to make the Hanukkah treat from scratch at a baking workshop.

Then you can go home and make them on your own whenever the mood strikes (that is, if you’ll ever want to see a donut again). 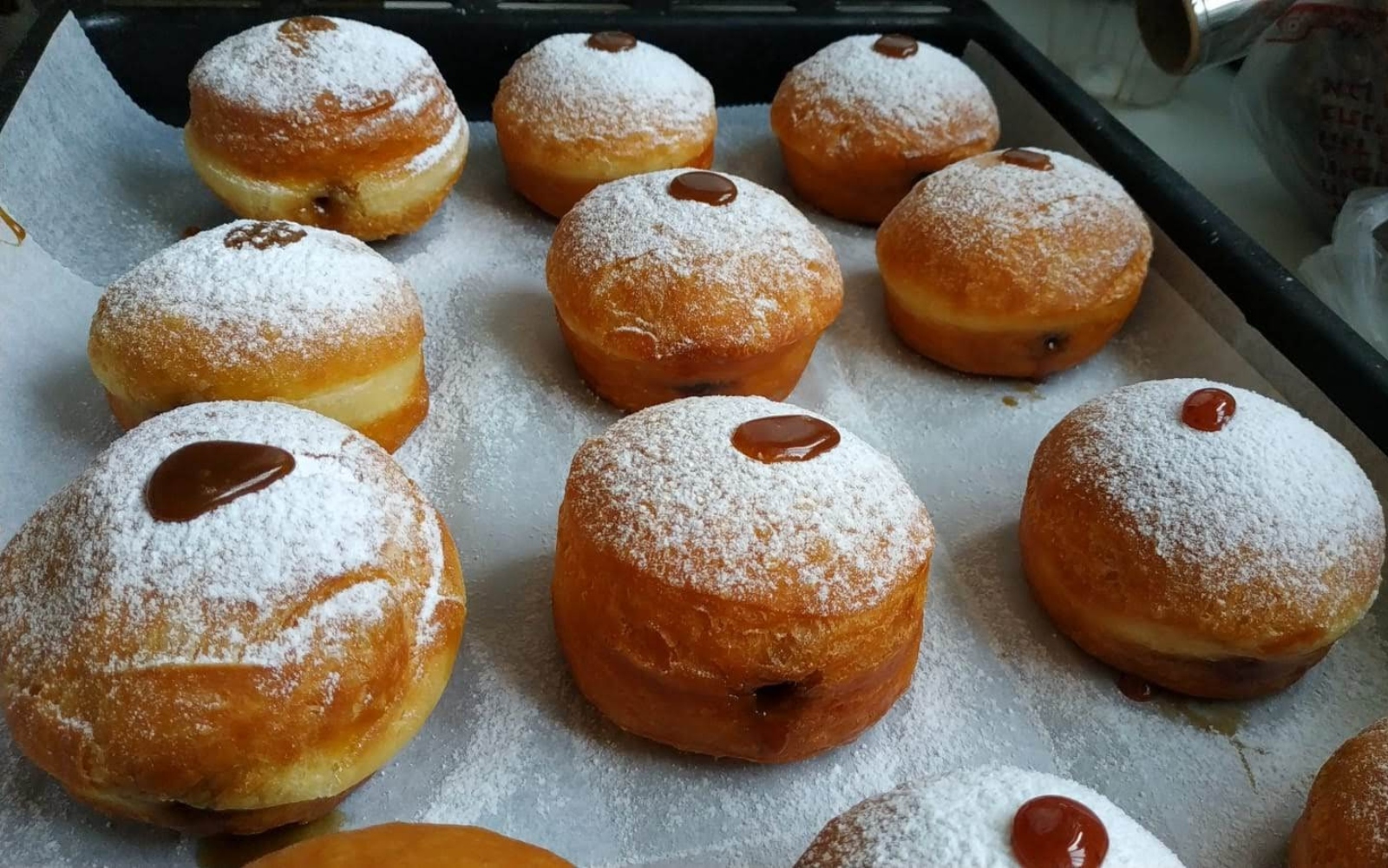 An annual tradition of Saidel Artisan Baking Institute in Karnei Shomron isthe family-friendly (and English-friendly) three-hour “Donut Olympics” for ages three and up. Go home with a whole box of your handmade, decorated creations.

Try out the elaborate menu at Roladin, or traipse around the area next to the Machane Yehuda market in Jerusalem to find scrumptious versions at Marzipan Bakery (a Jerusalem landmark known for its addictive chocolate rugelach) and English Cake.

Also, sample classic flavors such as jelly or dolce de leche (which tend to come in a substantially larger portion than fancier donuts) at the family-run bakeries and stands in and around the market.

Get in touch with Jewish history View from the Arbel hilltops. Photo by Mila Aviv/Flash90

In modern Israel, the past is always at our fingertips. Visit Arbel National Park high above the sea of Galilee, or Beit Guvrin-Maresha National Park  near Beit Shemesh, to get a sense of life in the time of the Hasmonean dynasty, when battles between the Maccabees and Seleucids took place at both these sites.

Maccabee supporters hid in the mountainside caves at Arbel, which today boasts a fascinating hiking trail with beautiful views to the sea below.

Beit Guvrin-Maresha contains more than 800 caves, once used for mining, burial, storerooms and hideouts. Also at the site are well preserved ruins of an ancient olive oil press and a large pigeon storehouse that attracts roosting birds to this day.

Take in a Festigal show

It wouldn’t be Hanukkah in Israel without Festigal. A live musical production geared to a pre-teen audience, it’s filled with dance numbers, acrobatics, pyrotechnics, and acting from a rotating cast of Israel’s biggest stars and talented young unknowns.

Get to the Tel Aviv Pop Up Music Festival, December 24 to January 1

A huge concert in honor of Hanukkah at Tel Aviv’s Menora Mivtachim Arena, the show is a musical ensemble including seven of Israeli’s most influential musicians of recent years.

Among the stars are Netta Barzilai, Omer Adam and Keren Peles backed by an international dance crew, a 12-piece orchestra, pyrotechnics and a giant on-stage menorah.

The latter is true because on the Russian new year (Novy God), Russians traditionally wear the hat of Santa Claus-esque figure Ded Maroz (Grandfather Frost) and decorate with a New Year fir tree, or yolka. Christmas decorations for sale in Haifa. Photo by Jessica Halfin

In addition to decorations, Russian or Arab grocery stores in mixed cities like Nazareth, Acre (Akko) and Haifa will likely have chocolate Santas and other festive treats on their shelves.

Go to a Christmas nighttime extravaganza In December, Haifa’s Ben Gurion Boulevard (Moshava Germanit) is a winter wonderland of lighted streets and decked-out restaurants featuring decorations that celebrate all faiths, at the foot of the illuminated Baha’i Gardens. 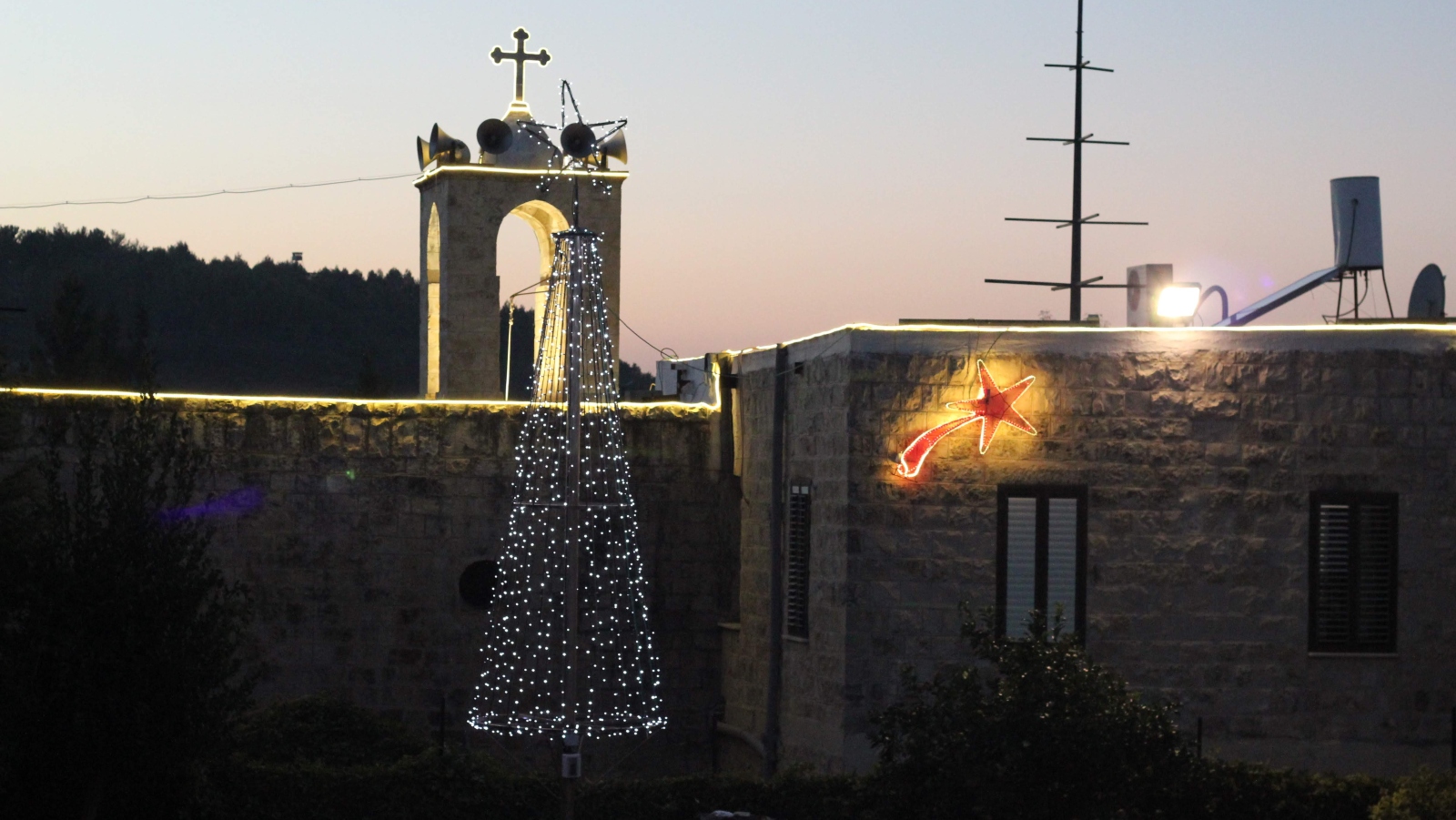 You’ll tour the Christian villages of Mi’ilya, Kfar Yassif and Fassuta to see their holiday light displays,visit art galleries and famous churches, sample local boutique wines, take a culinary tour in old Akko, or partake in a glass oil lamps workshop in honor of Hanukkah, suitable for the whole family. 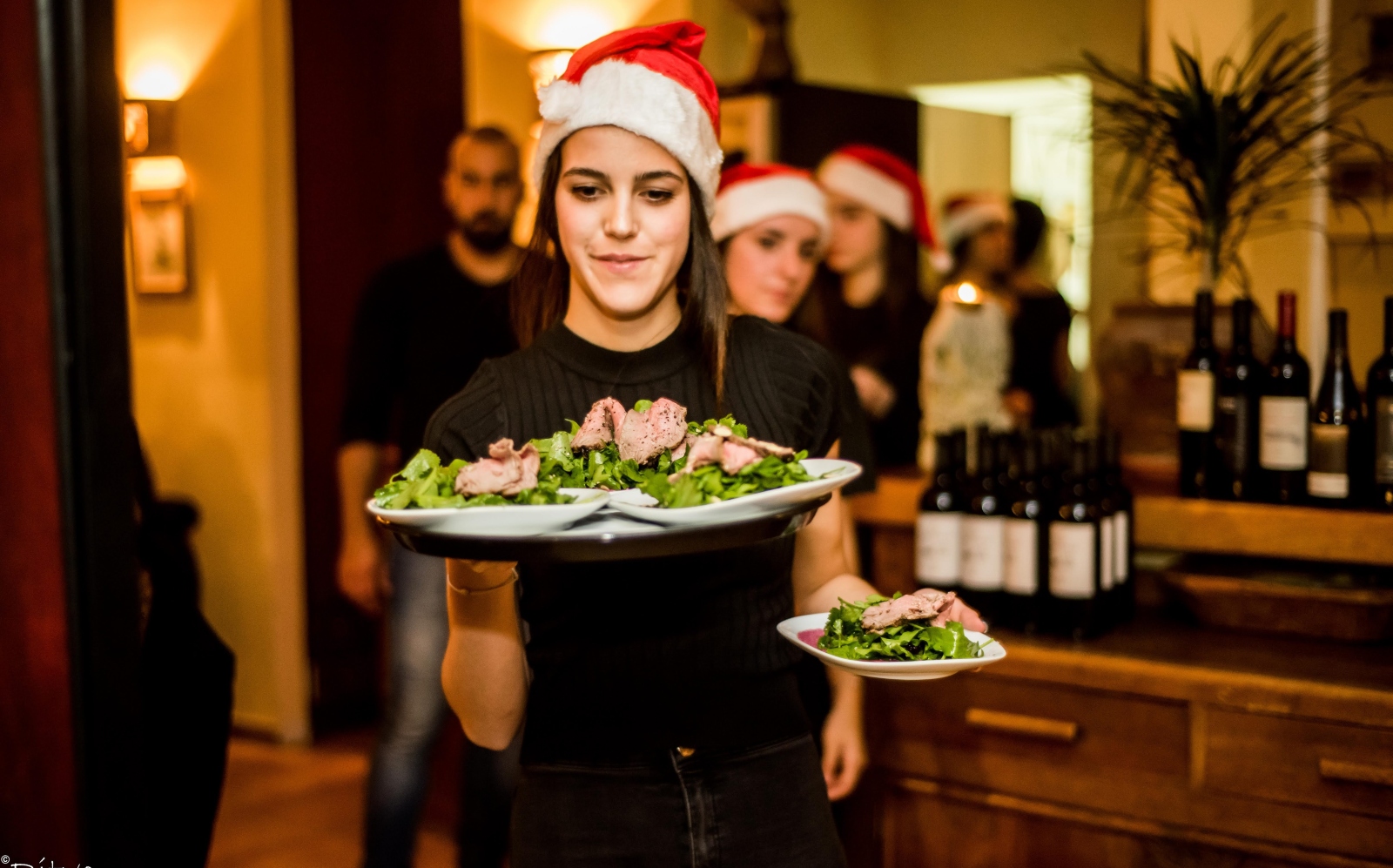 Check out this year’s tree-lighting ceremonies in Old Jaffa on December 15th or in Jerusalem. The trees in Nazareth and Haifa have already been lit and are up for all to enjoy. There are also plenty of holiday decorations in the streets of the German Colony in Haifa, and in the Big Fashion outdoor mall in Nazareth.

The annual Christmas Fair at Jerusalem’s historic YMCA on King David Street, not far from the Old City, features hundreds of handmade arts and crafts, live musical performances, and Middle Eastern holiday treats. It all takes place in heated tents in the complex’s courtyard underneath the spectacularly decorated building and tall Christmas tree.

Every Christmas, Issa Kassissieh opens up the official Santa House in the Old City of Jerusalem to spread joy and happiness to the Holy City.  It’s a wonderful Christmassy experience for kids and adults alike.

Stay up late in Bethlehem

Can you imagine midnight Mass in Bethlehem? If this sounds like a dream to you, book a guided Christmas tour to Manger Square and the Church of the Nativity with Ben Harim Tours or Abraham Tours. In some cases, Christmas Eve dinner is included.

Make sure to bring your passport with your Israeli-issued entry visa inside when traveling to and from Bethlehem.

CELEBRATE ALL THE WINTER HOLIDAYS AT THE SAME TIME 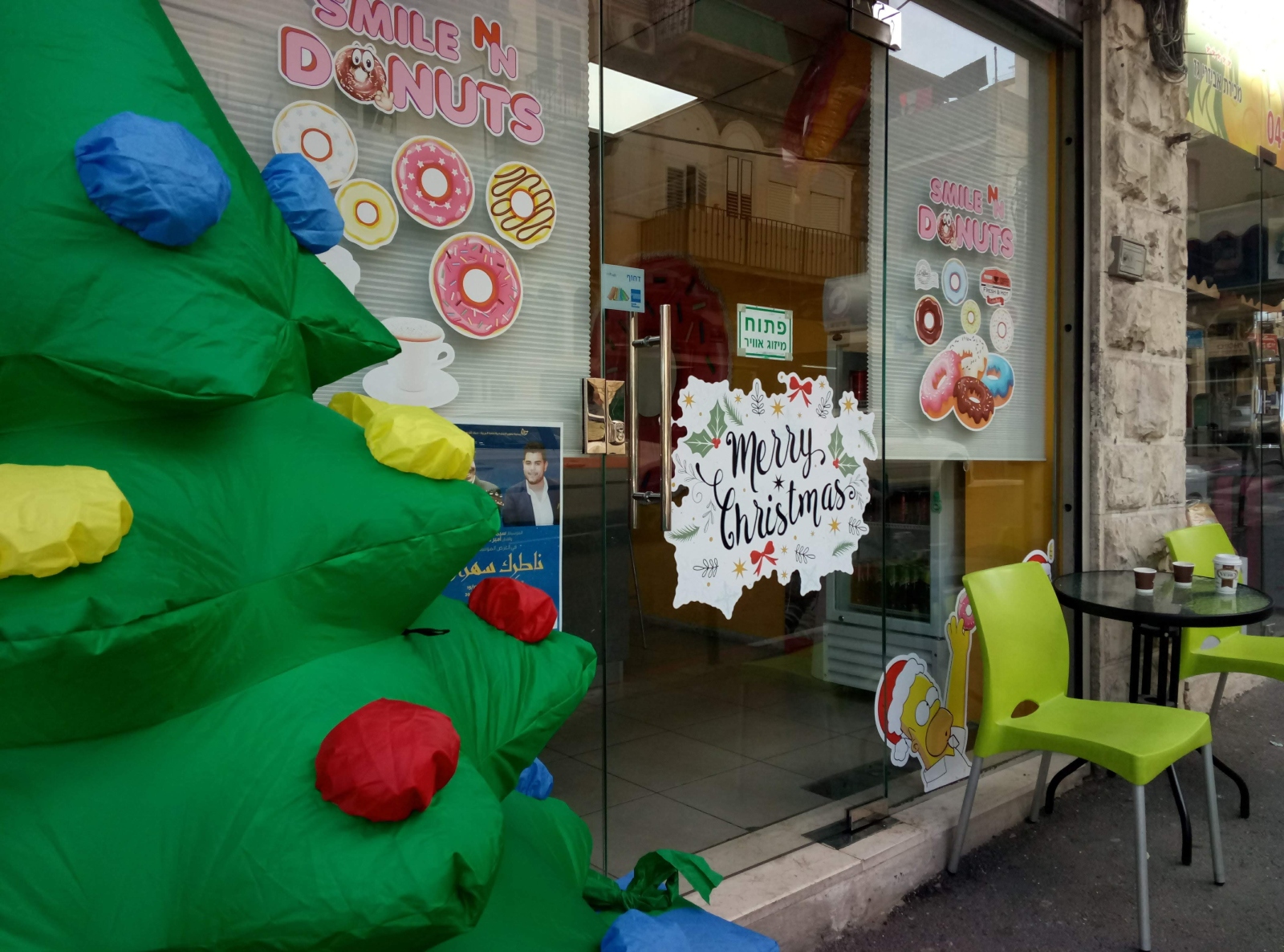 Wadi Nisnas, Haifa, during the Holiday of Holidays festival. Photo by Jessica Halfin

Each year, Haifa’s Holiday of Holidays goes all out to celebrate the three monotheistic faiths that coexist in the city.

Events planned this year from November 28 through December 19, at locations across Haifa, range from concerts and plays to open houses, special museum exhibits, and other activities that promote sharing and learning about others’ cultures.

In addition, there are outdoor musical performances, an antiques fair, parades, children’s activities, street performers and food stands for the occasion in the downtown Turkish Market area and adjoining Wadi Nisnas neighborhood.