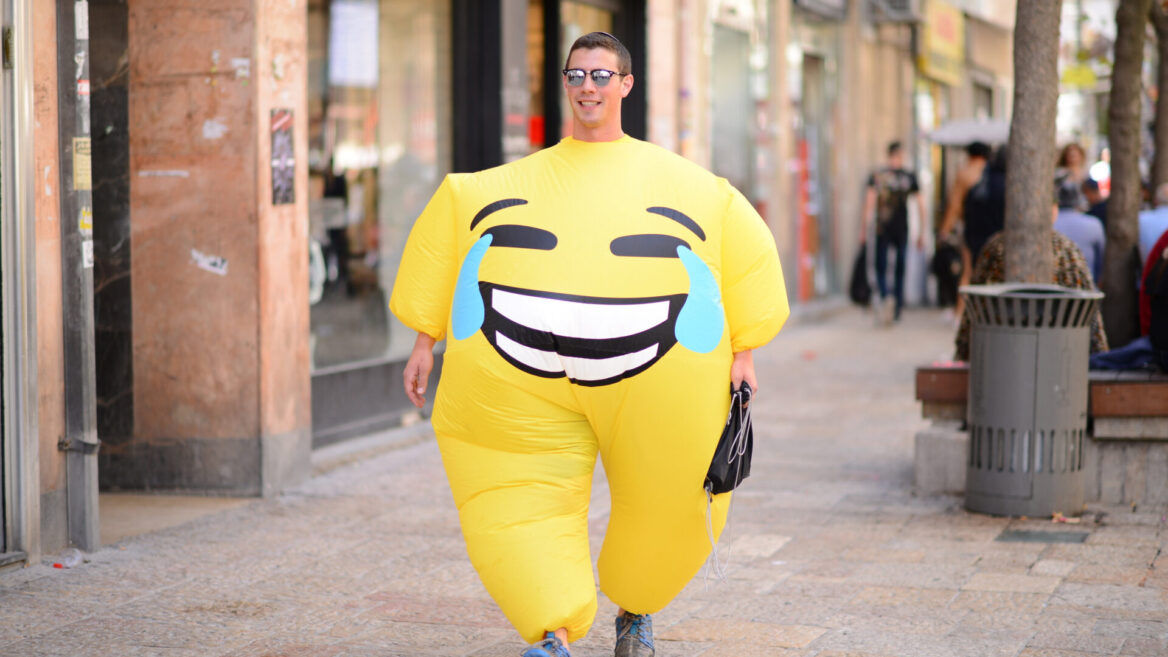 A Jerusalemite gets into the spirit of Purim. Photo by Mendy Hechtman/Flash90

Like most holidays in the Jewish calendar, Purim celebrates the near annihilation and last-minute redemption of the Jewish people – this time through the wily actions of Mordechai and Esther in the face of evil Haman.

But exciting as it is, the details of the biblical story are pretty well-known. That’s why at ISRAEL21c we thought we’d give you the lowdown on 14 almost equally important facts relating to the celebrations. This year, Purim will be celebrated from sundown March 9 through sundown March 10 (except in Jerusalem; see below). 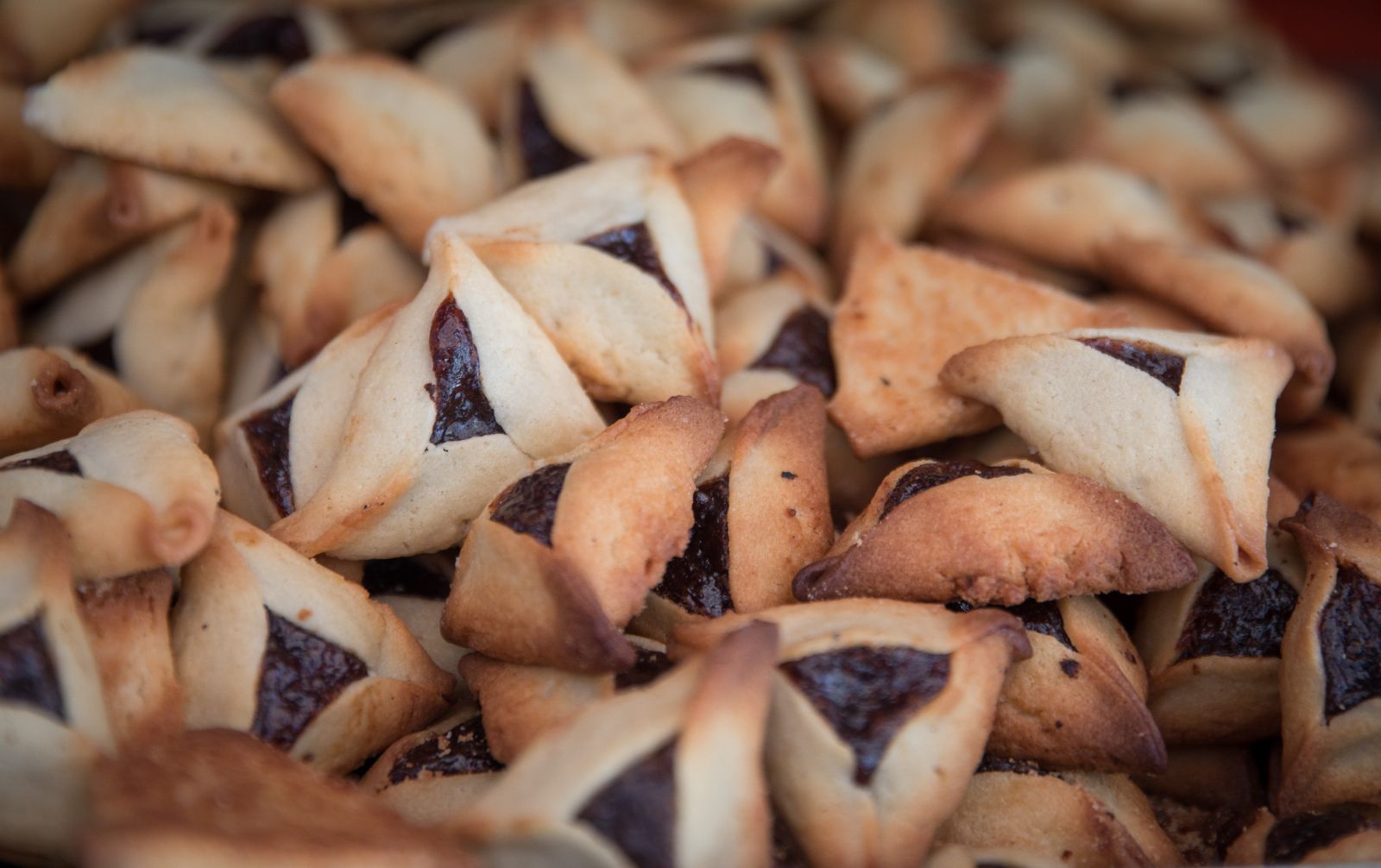 It’s a neck-and-neck situation when it comes to what delicacy is the most contested food of the Jewish calendar. While some may mistakenly point in the direction of matzah, it’s actually hamantaschen that can break down families and tear people apart.

The seemingly innocent-looking triangles of dough elicit incredibly emotional responses that go in one of two directions: you either look forward all year to the buttery, crumbly pastries with their melt-in-the-mouth fillings, or you can barely hide your disgust at the oh-so-dry cookies and their horrid poppy-seed interior.

So if you plan on sending a mishloach manot (more on this later) this year, our advice would be to check in advance in which camp its recipient resides. And if you can’t find out, give them hamantaschen filled with chocolate. That way they’ll at least eat half.

On Purim, there’s a religious obligation to get drunk – a mitzvah that is carried out most meticulously by Jewish teens worldwide.

The festive drinking stems from a Talmudic statement that one should drink until unable to distinguish between the wicked Haman and blessed Mordechai. Countless commentaries have since debated how much one should actually drink, with the bottom line being that getting wasted isn’t really what the author intended – but this little fact has yet to deter young people from having a drink (or three) too many.

While the rest of the world gets to celebrate Halloween, over here in the Holy Land we need to wait another couple of months until Purim to don our costumes.

Getting dressed up on Purim dates back to the Middle Ages, and more specifically to 15th century Italian Jews who were influenced by the Christian carnival season. The custom spread across Jewish communities over the years, becoming the most identifiable trademark of the holiday.

A more traditional reason given for dressing up on Purim, however, is the explanation that all the characters in the Book of Esther were in costume themselves: Esther, who kept her identity a secret; Mordechai, who remained loyal to his people while at court; and even God, who is not mentioned in the story but navigated the events to their happy ending.

Purim is not an official day off for Israeli workers. But woe to the person who dares show up at the office in plain clothes on Purim.

Not only will the said person be forever branded as a party pooper, but he or she will have to sulk in the corner while everyone else takes part in the mandatory best-costume competition.

Unfortunately, such festive behavior takes place in almost all offices across Israel, so there’s really no escaping seeing your co-workers dressed up as Danny Zuko and Sandy Olsson. And if that vision leaves you feeling faint – suck it up.

In 1912, a bunch of young people and artists from Tel Aviv organized a Purim parade in which people took to the streets dressed up in line with the Purim story, biblical scenes, Jewish history and life in pre-state Israel.

The parade paraded itself at the heart of the newly established city and became a hit, leading municipal authorities to adopt it as an annual celebration.

These festivities cemented the White City’s reputation as a fun and fabulous city, and while the procession, called Adloyada, moved to the neighboring city of Holon decades ago, Tel Aviv remains Israel’s best-loved party spot. 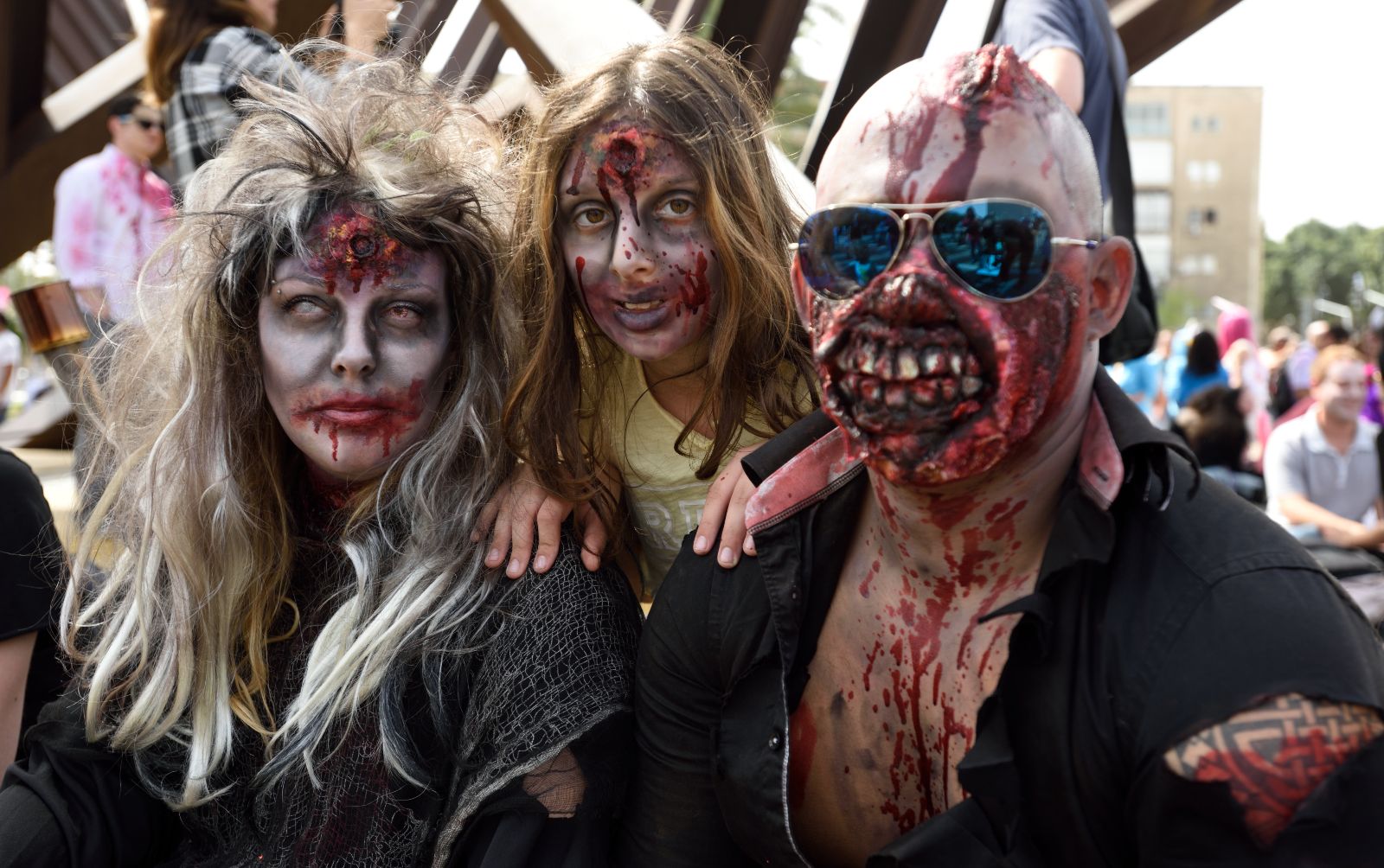 Zombies are a favorite Purim look. Photo by Gili Yaari/Flash90

For all those who think dressing up as Elsa and Anna is a bit too tame, may we recommend the annual Tel Aviv Zombie Walk.

Taking place on Saturday, March 14, the parade is set to make its way around the center of Tel Aviv, scaring innocent passersby, making noise, merriment and amazing Instagram photo ops.

The procession is being held in collaboration with heavy-metal band Iron Maiden that’s playing in Israel later this year, so expect a lot of Iron Maiden paraphernalia on top of the regular tissue paper rolls and fake blood. Don’t forget the ear plugs. 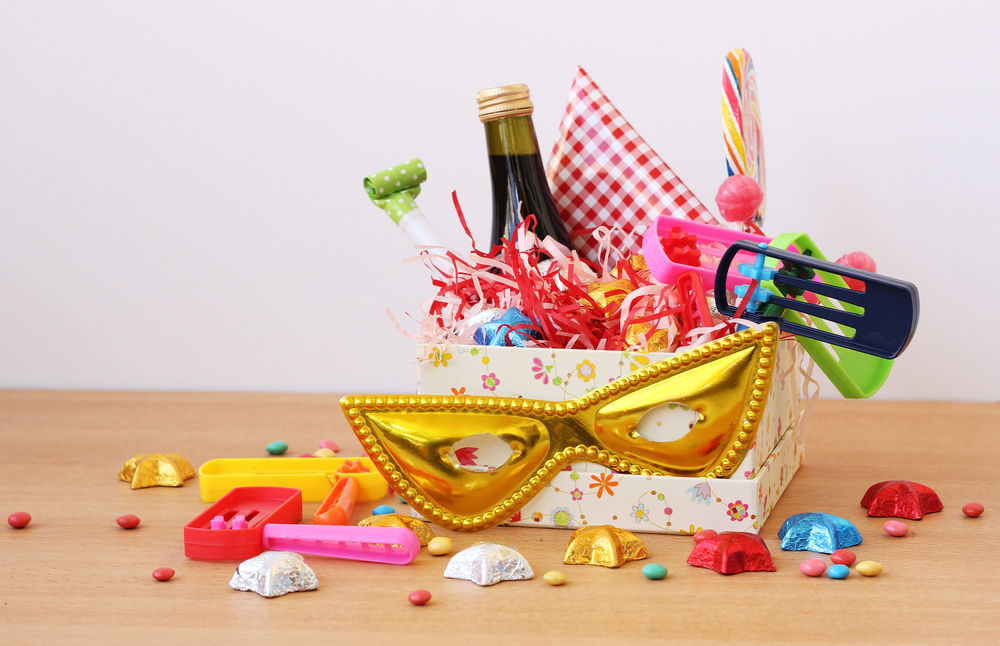 Will your karma be good this year? Photo by Shutterstock

On Purim, Jews are obligated to hand out mishloach manot, or food parcels, to both friends and the needy. What started out as an act of charity is now an opportunity to shower friends, neighbors, teachers and colleagues with painstakingly thought-out, beautifully wrapped delicious and intricate delicacies and be rewarded with similarly kind efforts.

Because as karma would have it, the year you pull out all the stops with your mishloach manot is the year you’ll get the lousiest ones of all, comprised of a bit of Bamba and Bissli shoved into ugly cellophane wrapping.

While adults can (or should) handle such unfortunate situations, mishloach manot is something that takes place every year at school, and our hearts go out to the children who receive (and give) miserable food parcels.

Our top tip: always make an effort with the food parcels you send your kid to school with, and secretly make an extra one, in case they come home disappointed.

Fans of Harry Potter (i.e. mankind) know of He Who Must Not Be Named. But the Jewish people boast a much more ancient Lord Voldemort – Haman from the Book of Esther.

According to the biblical story, Haman was a vizier of King Ahasuerus who convinced his master to kill all the Jews in the Persian Empire. Haman’s evil plot failed due to the heroic efforts of Esther, the king’s wife, and her uncle Mordechai. And instead of wiping out the Jewish people, Haman found himself hanging off the gallows.

On Purim, the miraculous tale is read out in synagogue. And to express the Jewish people’s disdain of Haman, every time he’s mentioned the entire congregation makes a big noise with ratchets in order to blot out his name. Imagine them doing that at Hogwarts.

There’s no doubt that the coronavirus crisis sweeping the world is absolutely horrible. And it’s putting a real damper on Purim celebrations too. Purim parties everywhere are being cancelled due to fears of infection and some 1,000 kids will be stuck in isolation on the day itself.

Perhaps this is just as well, seeing as the outbreak of COVID-19 anyhow meant that costumes couldn’t be shipped over from China this year. At least all these cancellations will spare us from having to share our lack of sewing skills with the world.

In Israel, we celebrate Purim with plenty of drinking, street parties and awful corporate costume competitions. But in Iran, the small Jewish community does something far more incredible during the holiday: its members visit the graves of Esther and Mordechai.

The graves of the protagonists of the Purim story are believed to be located inside a domed mausoleum in Hamadan – a city whose previous incarnation was the capital of the Persian dynasty described in the Book of Esther, thus making Esther and Mordechai’s burial there a real possibility. 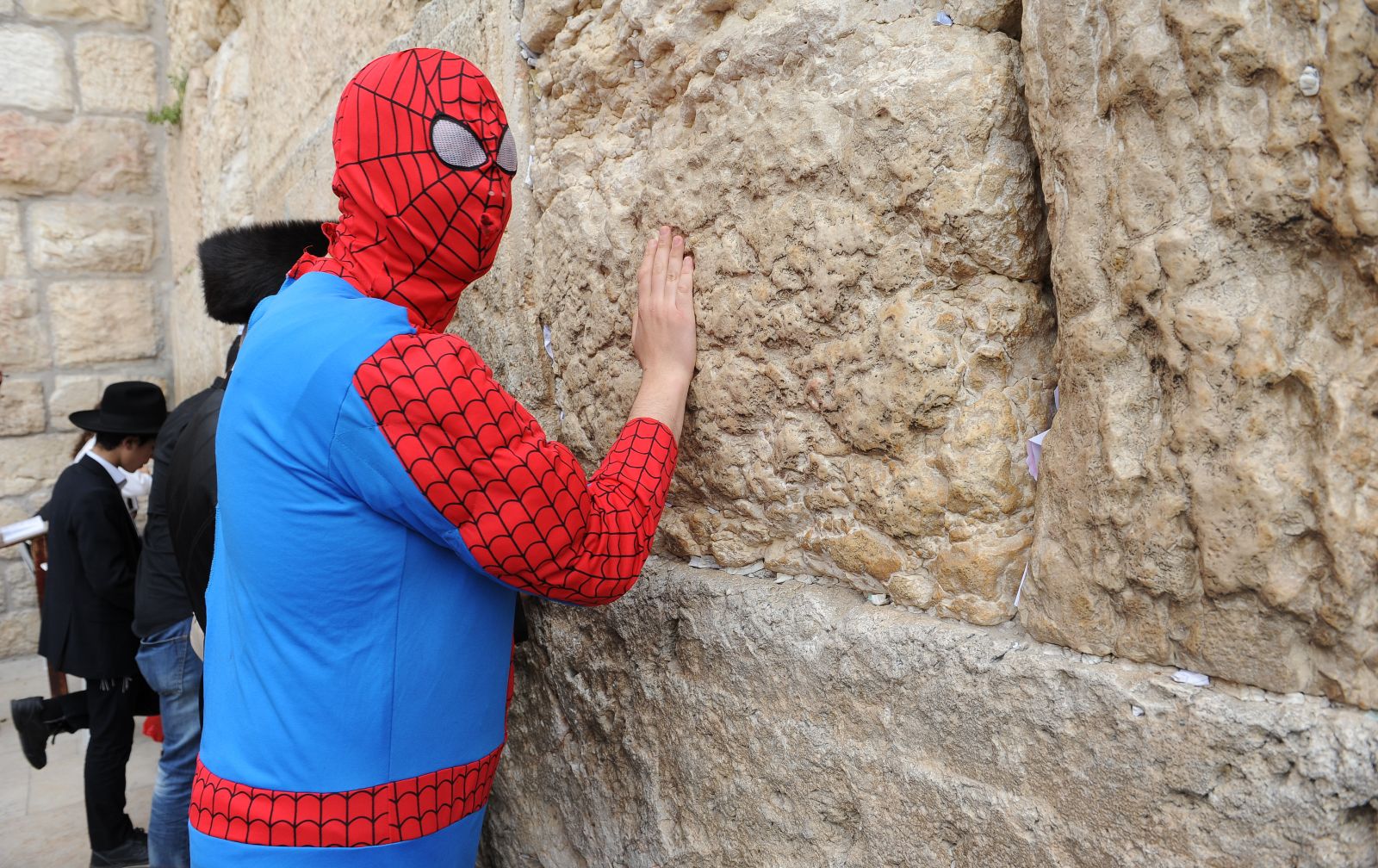 Purim is universally celebrated on the 14th day of the Jewish month of Adar. But in Jerusalem, it’s celebrated a day late, on a day called Shushan Purim.

Years later, it was decided that Purim will be celebrated a day late in all walled-off cities, namely Jerusalem. While this sounds pretty cool, it’s actually a source of havoc and confusion in present-day Israel, where students in Jerusalem get a different day off from their peers elsewhere and dress up out of tune with the rest of the country. If you fancy another day’s celebrations, however, you now know where to go.

Gerard Butler is one awesome actor – remember how he fought off the bad guys in the movie 300? Well, one of the said bad guys is none other than King Xerxes, the Persian king usually identified with the Book of Esther’s very own King Ahasuerus.

While it’s unclear whether Xerxes I was in fact the biblical King Ahasuerus, we’d like to think that it’s the very same man. Not for any particularly scholarly reasons, but because it gives us the opportunity to indulge in a guiltless 300 marathon. Hey, we’re learning about our people’s history here.

For some unknown reason, many in Israel think it’s entirely appropriate to celebrate our redemption in ancient times with napatzim, little explosives that are thrown around to generate smoke and loud bangs.

Not only do these napatzimpose a danger to their users and their surroundings, they also often scare the hell out of people suffering from PTSD and cause pets to run away and get lost from fright.

So if you hear a bang while celebrating Purim in Israel this year – don’t automatically head out to the nearest bomb shelter. But please, don’t encourage this disturbing behavior.

Remember Bambi? Well, we’d have thought that young kids today would have no idea who the classic Disney character is. But we’d be wrong, since it’s reportedly the No. 1 most researched costume on Google.

Beating more modern costume ideas such as superheroes (no. 3), unicorns (no. 5) and coronavirus (no. 8), the protagonist of the movie that made us all cry is apparently going to be all over the place this holiday. Now that’s a lovely surprise.