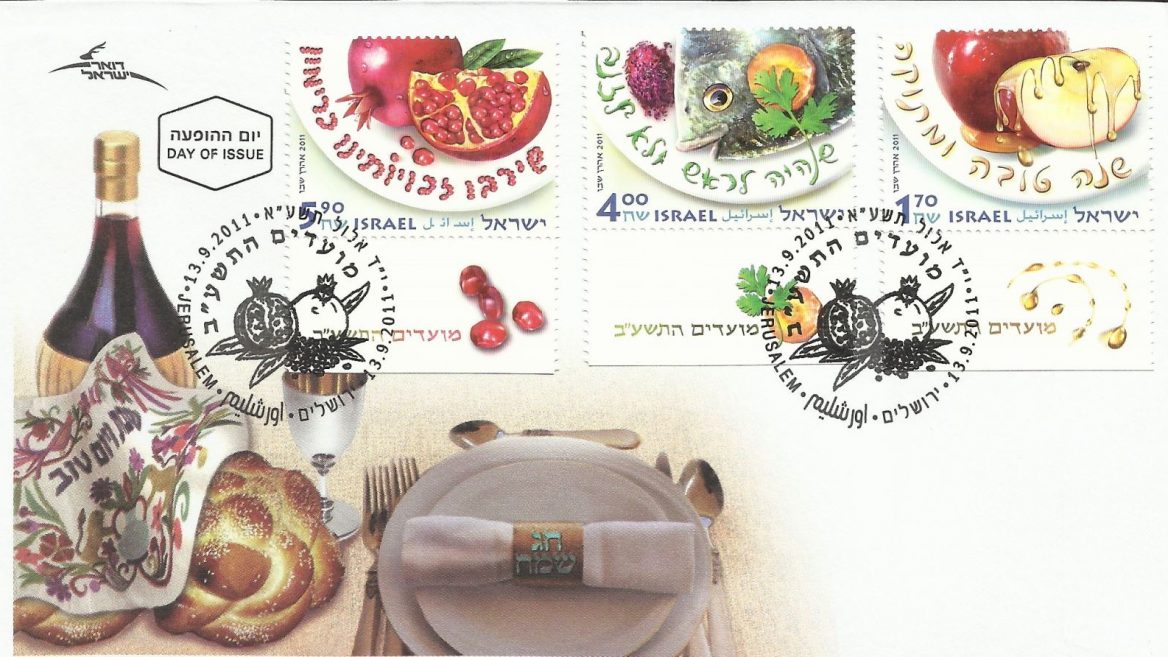 The first festival series was issued in 1948. It was designed by Otte Wallish, the graphic designer responsible for the design and calligraphy of Israel’s Declaration of Independence, as well as the state’s first postage stamps.

Wallish’s “flying scroll” design was based on ancient seals found on the handles of jars dating back to 700-600 BCE. According to the Israel Post website, it is impossible to say with certainty what the motif represents but since 1940s archaeological research associated the “flying scroll” with the first Jewish-Roman war and the Bar Kochba Revolt, it is fair to assume that Wallish was referencing this historical event as a parallel to the newly established State of Israel. 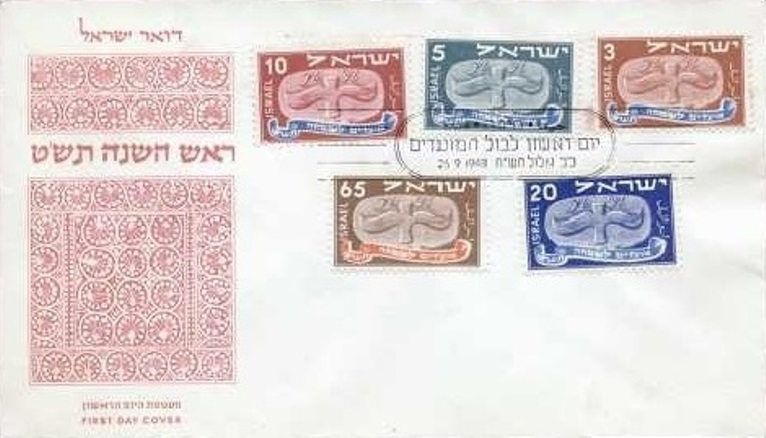 The following year, the Wallish-designed 1949 festival series honored the freshly minted Israel Defense Forces, created by order of Prime Minister Ben-Gurion following the disbanding of all paramilitary groups that had fought prior to independence. 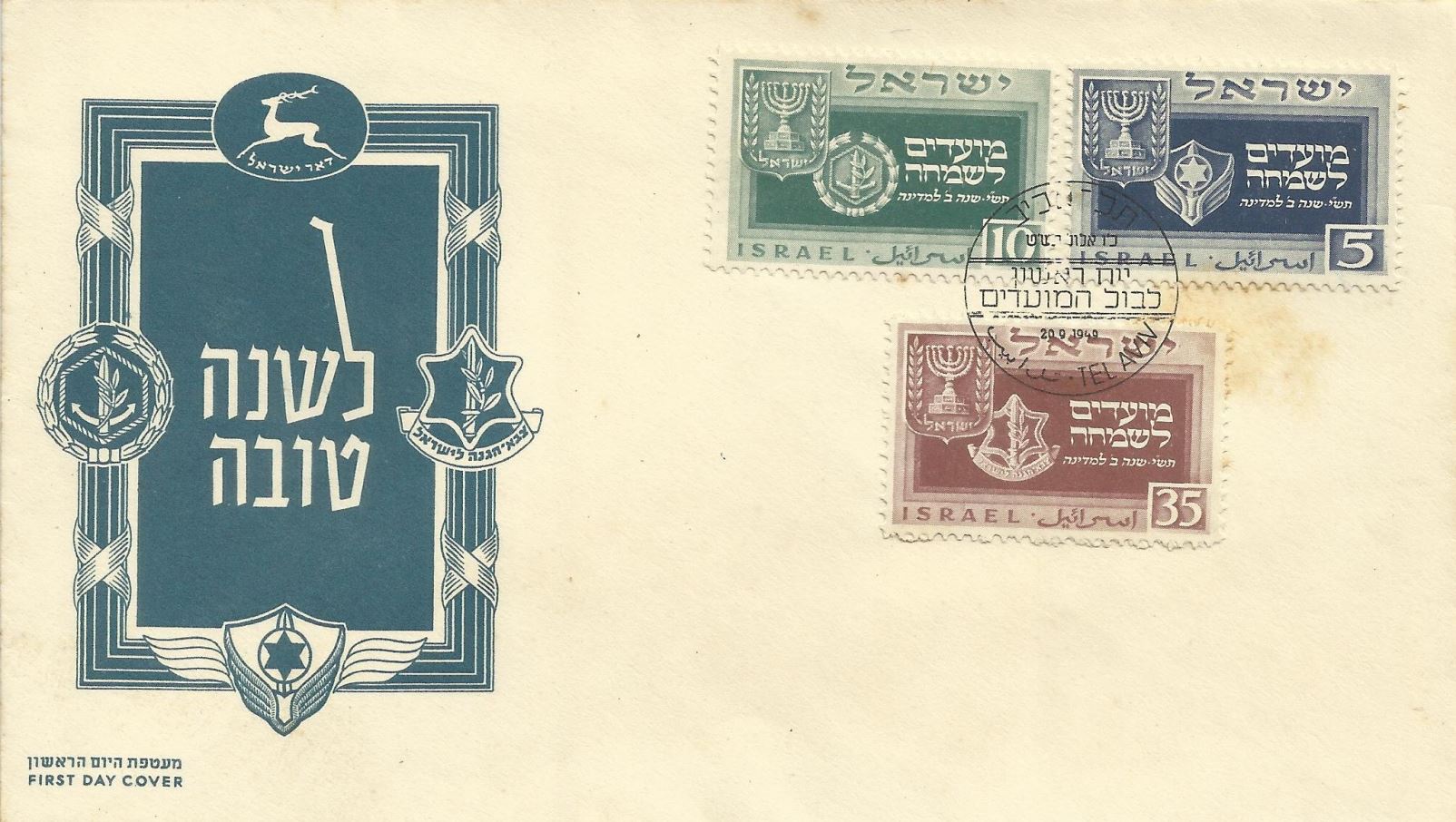 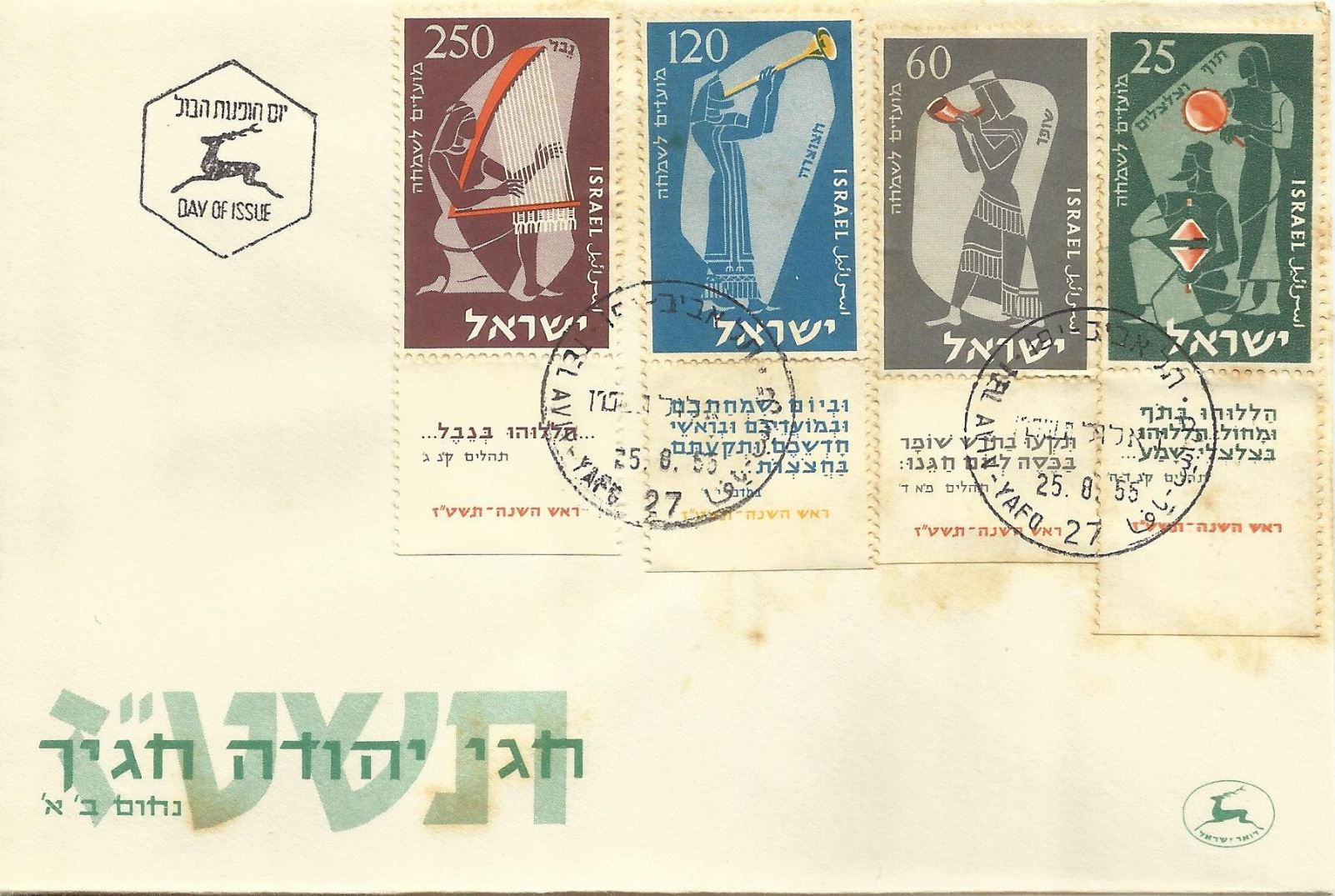 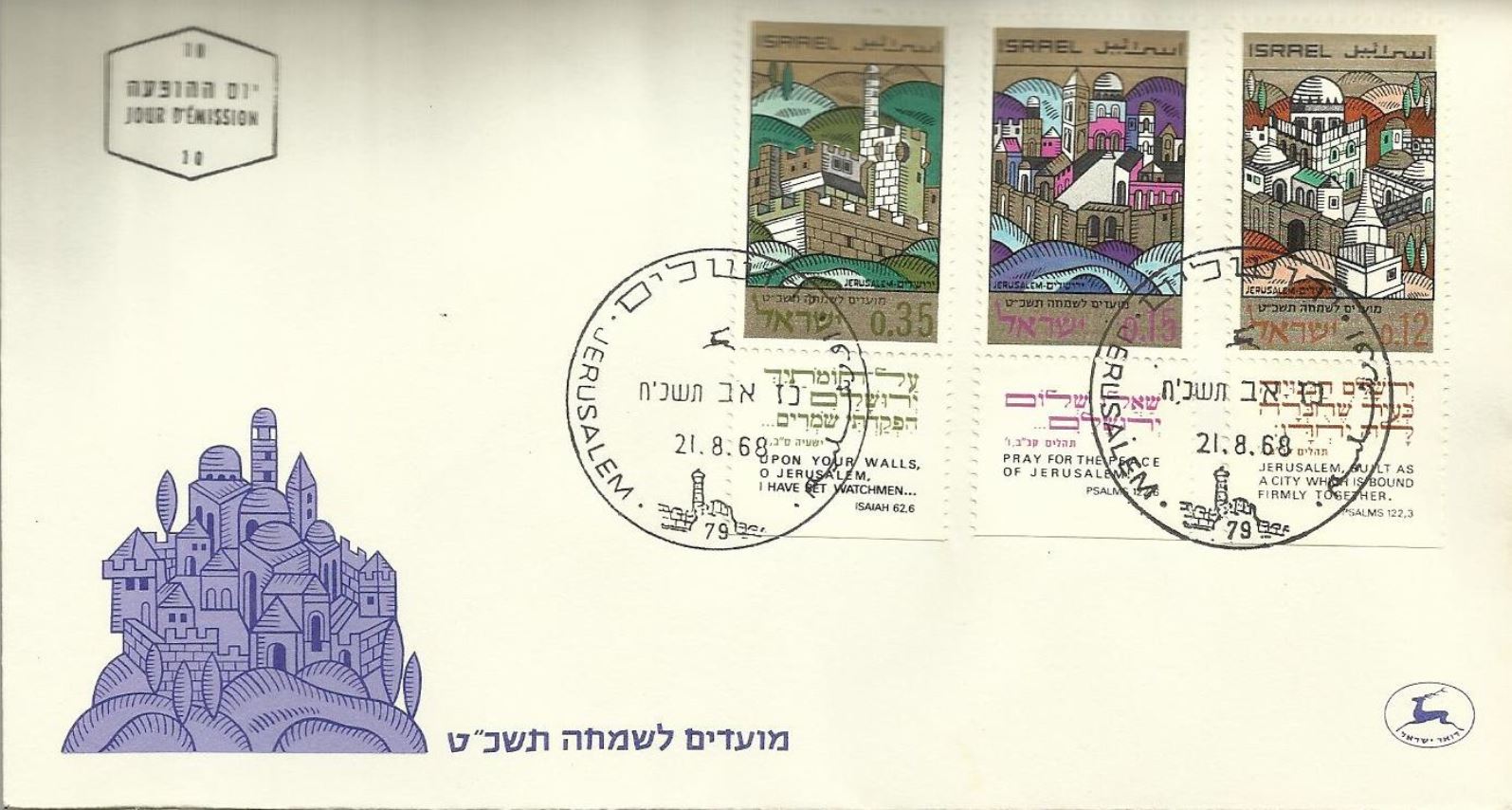 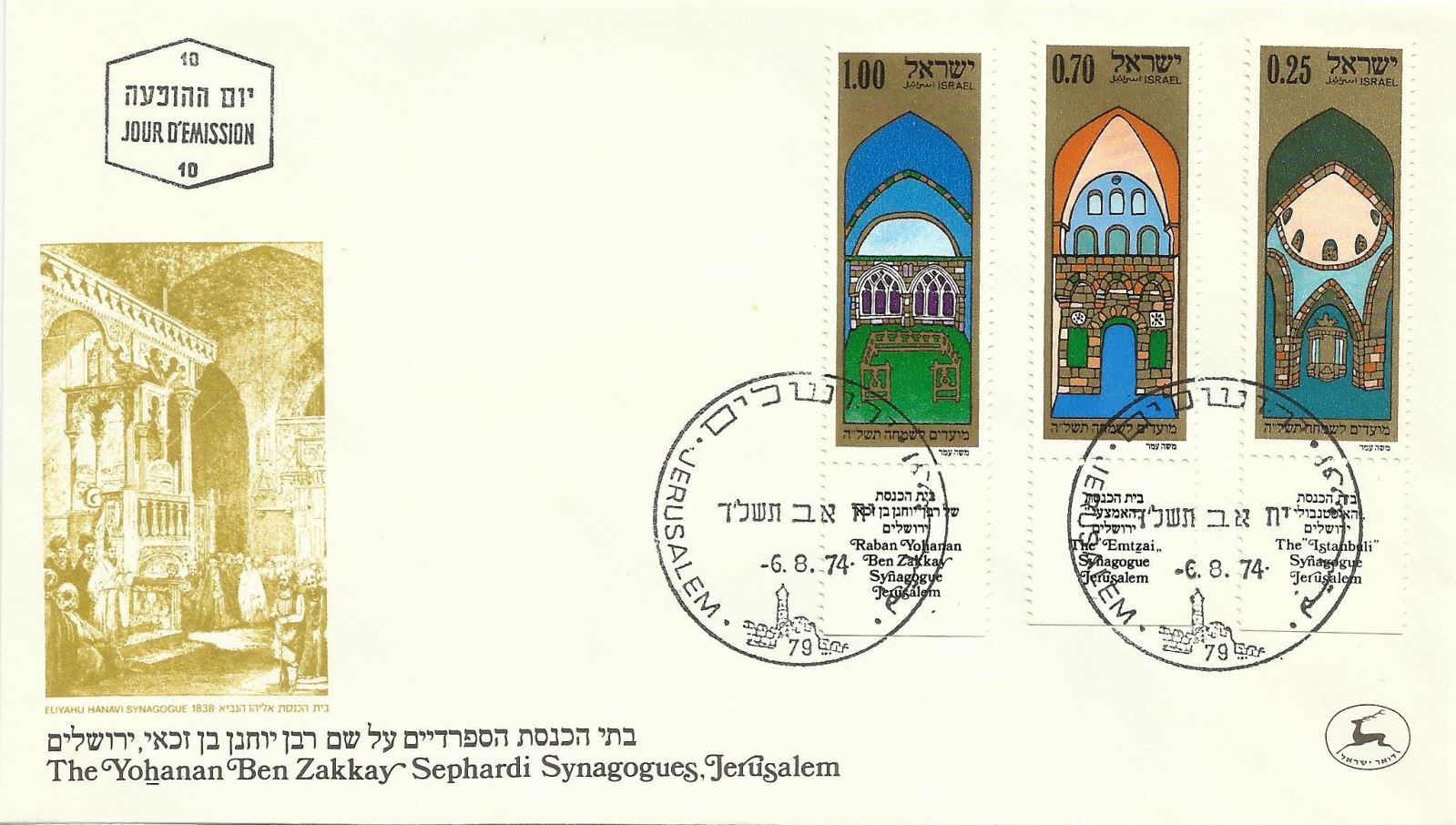 During the 1980s, influenced perhaps by the opening of the Diaspora Museum in 1978, the festival series took a deep dive into Judaica and, in fact, for two years running presented artifacts crediting the museum in 1987 and 1988 in a series, also designed by Dror Ben Dov. 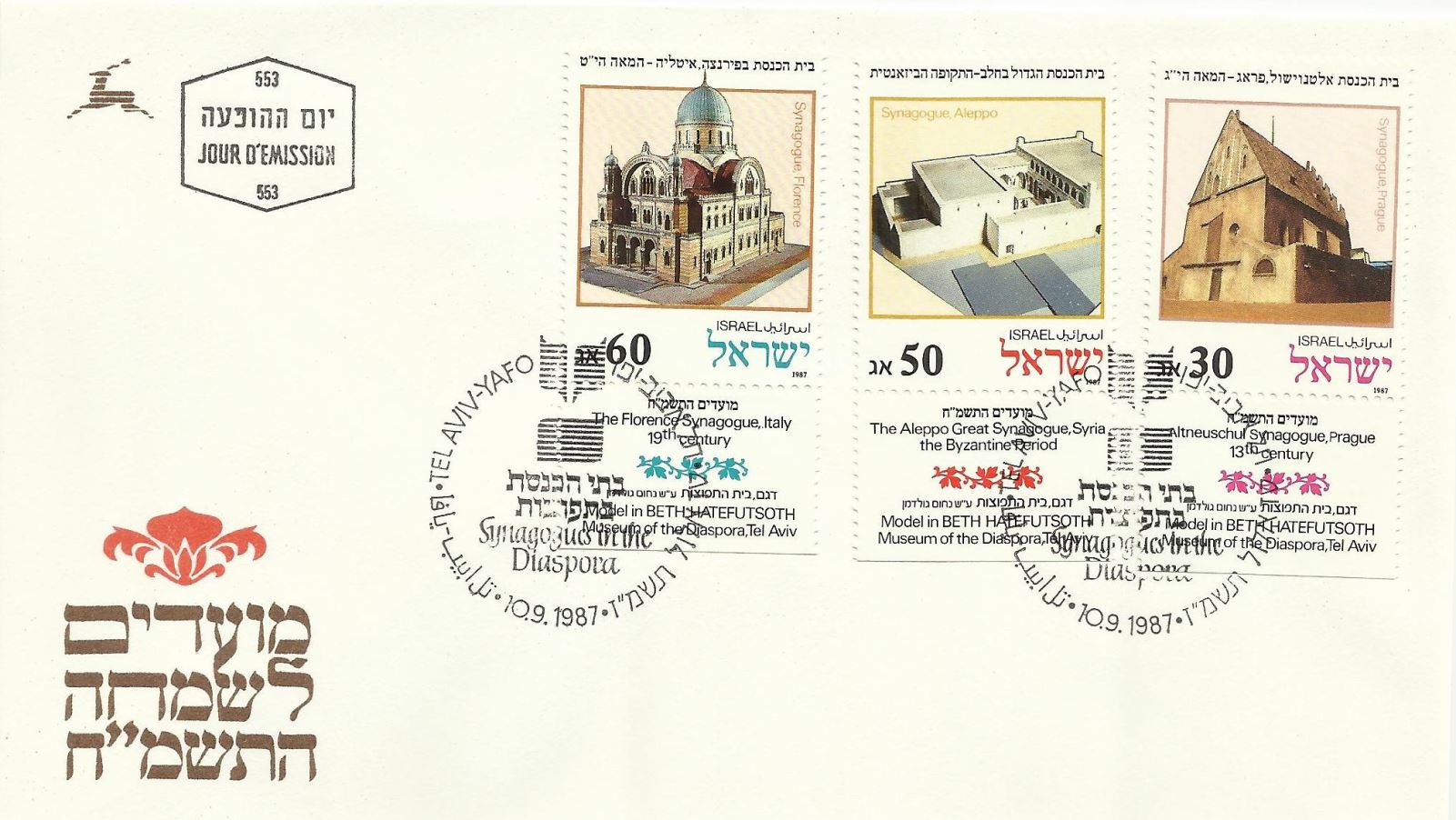 In the 1990s, the Post Office developed a sort of 3-in-1 concept for the festival series, with the first stamp in the series presenting Rosh Hashana, the second honoring Yom Kippur and the third celebrating Sukkot or Simhat Torah, as in the series designed by Ora and Eliyahu Schwarz in 1991. 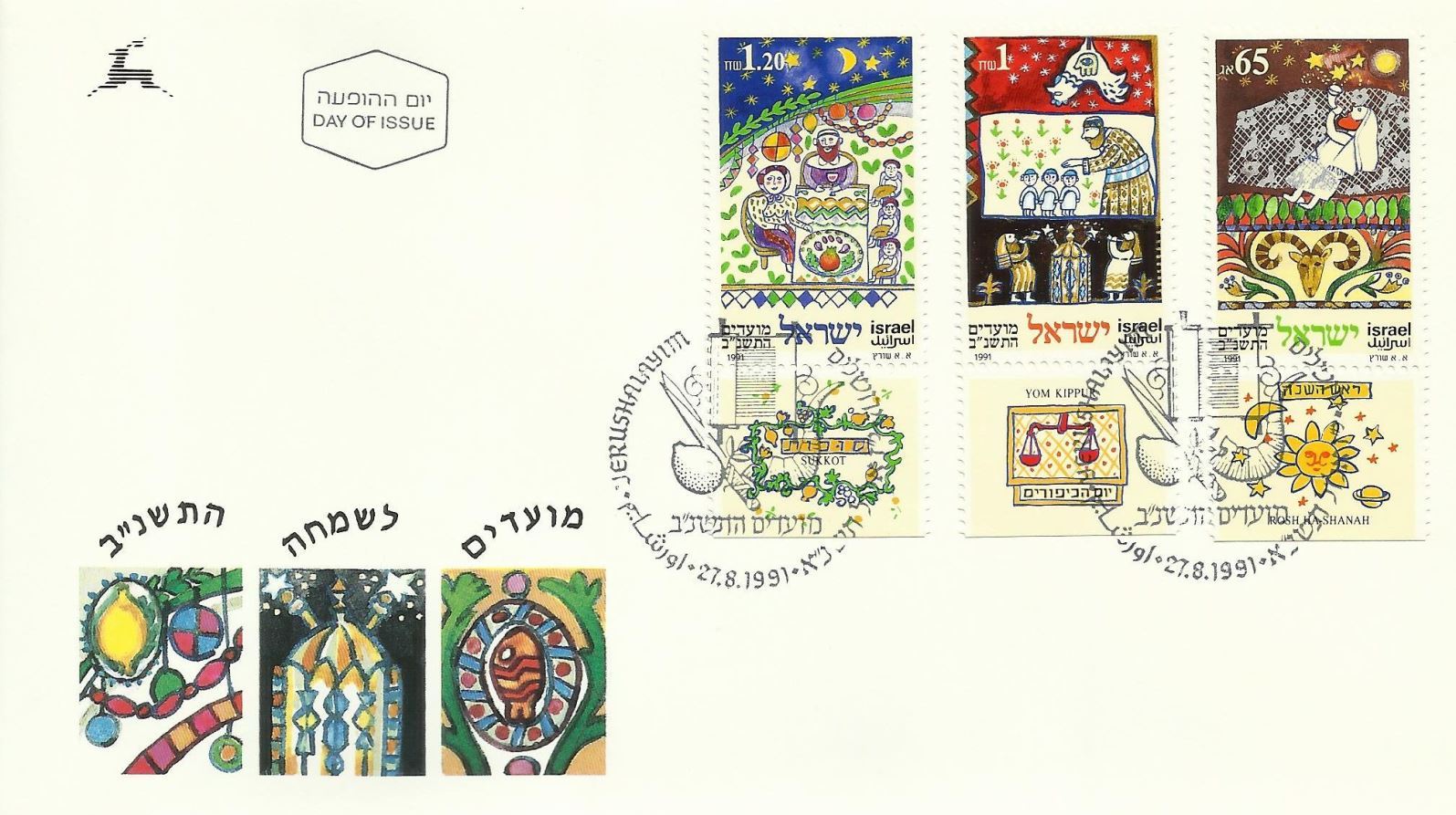 Festivals 5752 (1991) by Ora and Eliyahu Schwarz. Photo via israelphilately.org.il/en/

And just as the world looked forward to the new millennium, the Israel Postal Authority looked backwards in a nostalgia-themed festival series. Instead of presenting original graphics, as it had done for decades, the year 2000 series took inspiration from old Jewish New Year postcards provided by Israeliana ephemera collector Hayim Shtayer. 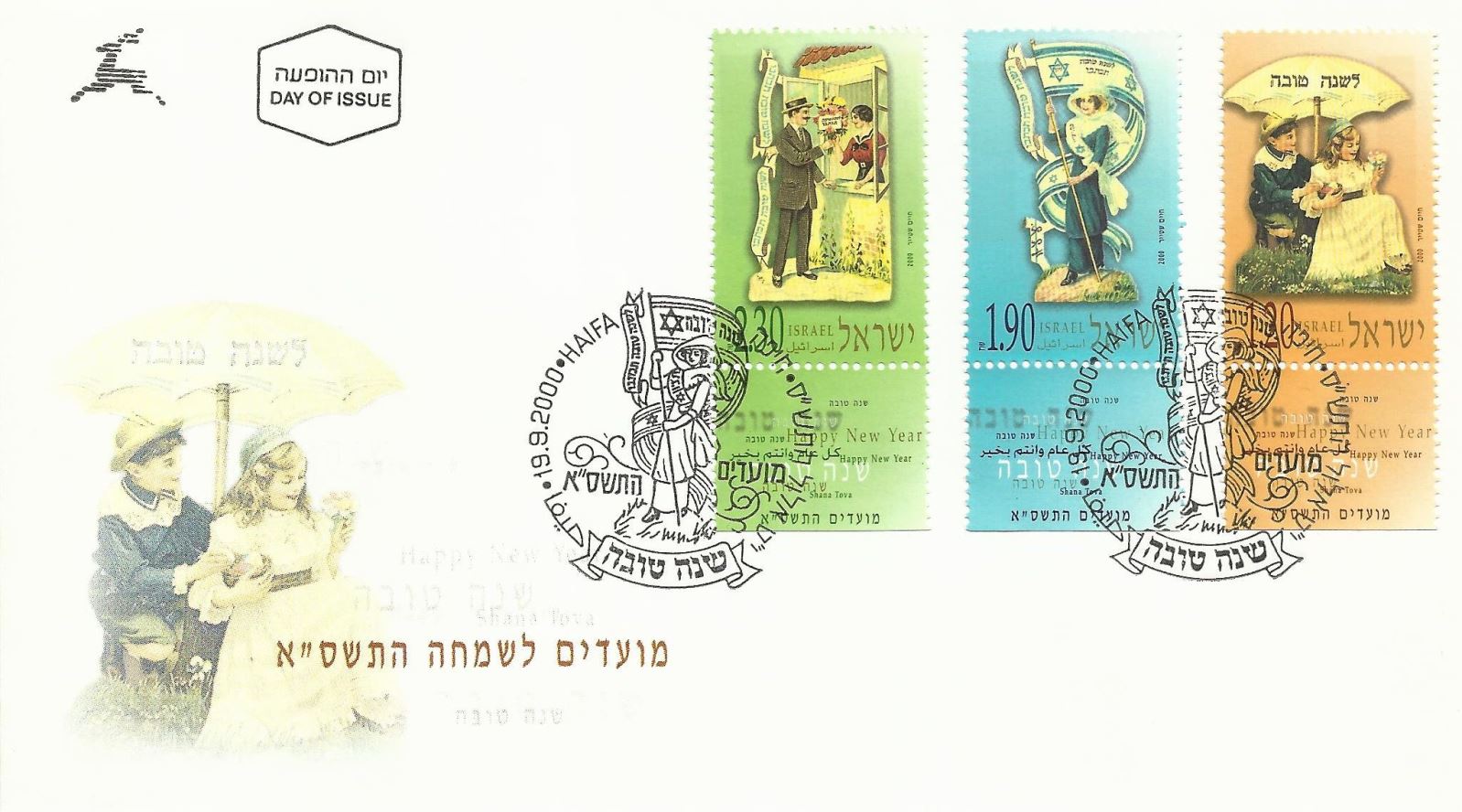 Over the past decade, the festival series’ themes have focused more on the religious aspect of the High Holidays, as in the 2013 series “The Month of Tishrei” by Aharon Shevo.

It presented three of the special customs associated with the period: the Tashlich ceremony of symbolically casting away any sins on water, the Yom Kippur Kol Nidrei prayer, and bearing the lulav (palm frond) at Sukkot. 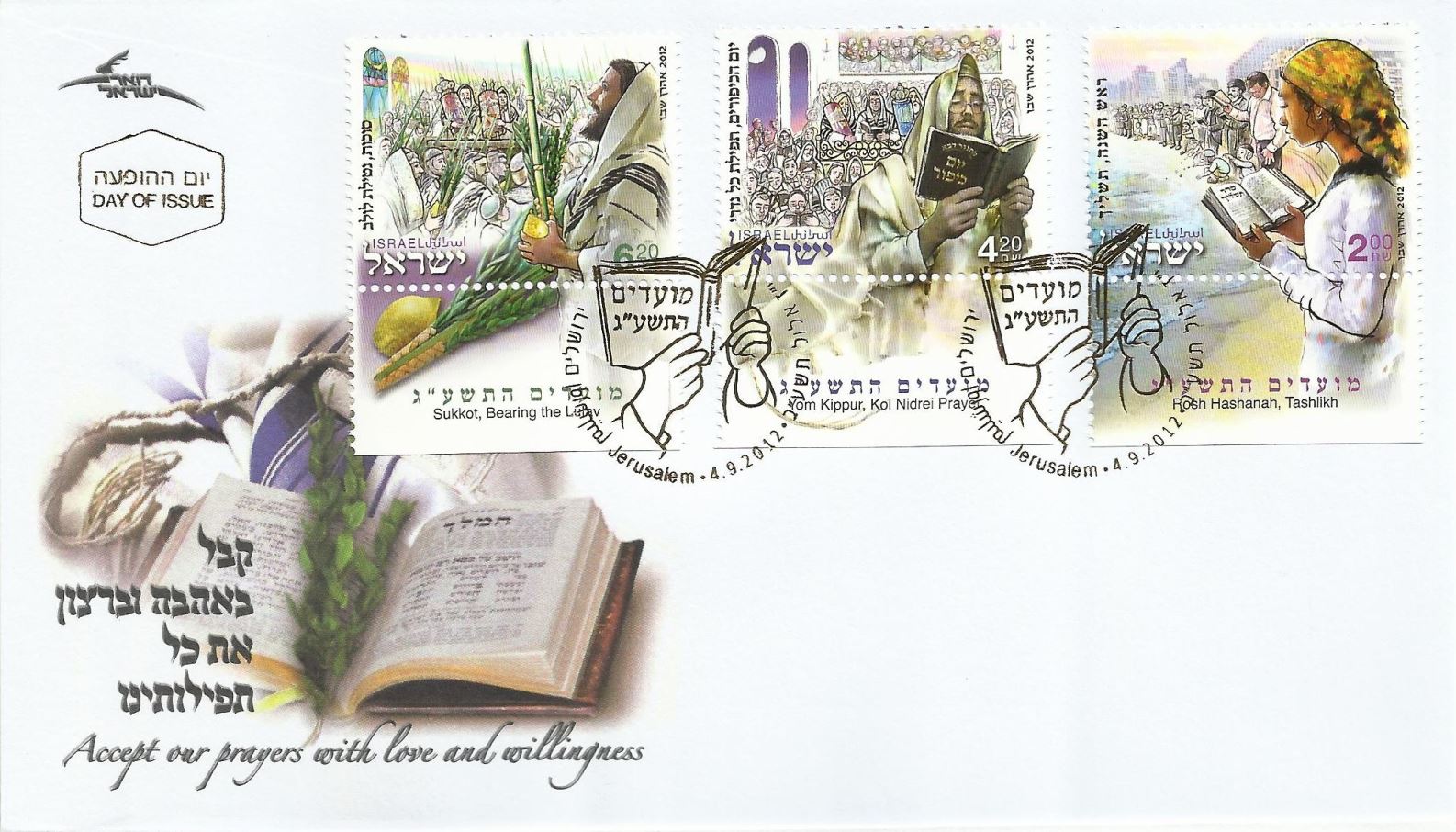 This year’s series by children’s book illustrator Diana Shimon  is even more esoteric, presenting three special customs that are carried out in the dark: Selichot – prayers for forgiveness that are recited in the period leading up to Yom Kippur; sukkah-building, which traditionally takes place at night immediately after the end of Yom Kippur, and hakafot — dancing with the Torah scroll — on Simchat Torah.

Festival 2017 – (5778) by Diana Shimon. Photo via israelphilately.org.il/en/
UNCOVER ISRAEL - Get the ISRAEL21c
Weekly Edition free by email
Sign Up Now!
Bring Israel's story to life.
Millions of people around the world rely on us to gain a deeper understanding of Israel. We are the trusted source for original content you won't find anywhere else.
You can make a difference. Donate today to support journalism that brings Israel’s story alive.
SUPPORT ISRAEL21c
Read more on:   Culture, Nostalgia, stamps, Rosh Hashana