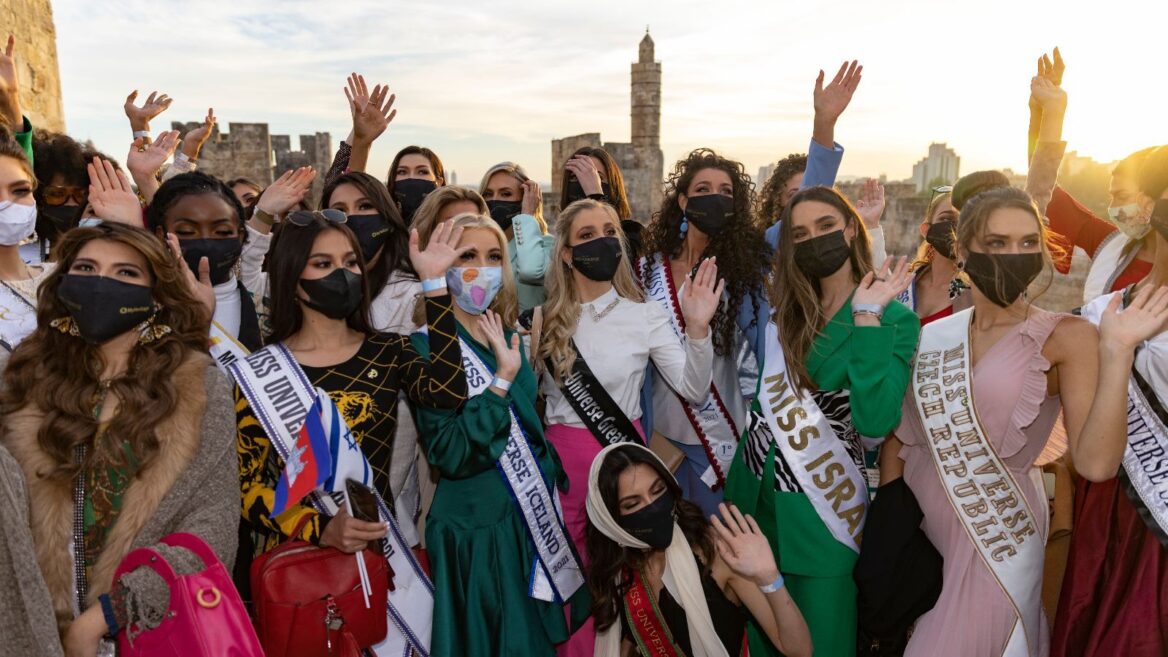 Miss Universe contestants visit the Old City of Jerusalem ahead of the 70th edition of the pageant, held in Israel for the first time. Photo by Olivier Fitoussi/Flash90

When it comes to the Miss Universe pageant, most people firmly belong in one of two camps: one that believes it to be a global celebration of women and beauty, and another that finds it an old-fashioned, patriarchal event that belongs deep in the past.

Whether you find it to be an incredible, sparkly international affair or not, there’s no disputing that this year it’s one that’s (relatively) close to our hearts, being held as it is for the first time in Israel, more specifically in the sunny southern city of Eilat, which gained a lot of international attention for its beauty.

In honor of the event, we’ve gathered the top 10 things you didn’t know about this year’s pageant, no mentions of world peace in sight. And congratulations of course to Miss India Harnaaz Sandhu, who in the ungodly hours of dawn in Israel became the new Miss Universe!

Having beaten 11 other contestants earlier this year to become Miss Israel, Noa Cochva recently became the automatic candidate to represent the country in the Miss Universe pageant. The 22-year-old shared in press interviews that she spent parts of her childhood in and out of hospital due to disease, and that the experience left her determined to become a doctor. In the meantime, she’s studied to become a pastry chef, and was working as one until Covid-19 led to shutdowns. Unfortunately, Cochva didn’t make it to the pool of 16 finalists, but nonetheless did a fabulous job hosting her colleagues on their whirlwind tour of Israel.

For those of you who aren’t the hugest fans of Miss Universe, check out this awesome Miss Fix The Universe initiative that took place at the same time, sponsored by the Israel Women’s Network at the Peres Center for Peace & Innovation. This alternative contest got tens of thousands of people to vote for their favorite female social entrepreneurs who are out to make the world a truly better place. The winners were the amazing women behind the “Shame Moves Aside” campaign in support of domestic violence victims, the “job360” initiative that works to increase employment in Arab and Haredi society, and “The Lobby for a War against Sexual Violence.”

Musical sensation and all-around inspiration Netta Barzilai turned down an offer to perform at this year’s pageant, noting that while she was honored to be invited she can’t imagine herself participating in an evening that judges women on their looks and adding that it’s time to move on from such old-fashioned concepts. Still, the evening was far from devoid of musical talent, as Israeli superstar Noa Kirel performed in her stead and, as usual, absolutely rocked.

In a nod to the year being 2021, quite a few of the dresses showcased in the contest were green, and we don’t mean the actual color. Noa Cochva, for example, donned a 25-year-old dress made of thousands of old coins, while Miss Argentina Julieta Garcia chose to wear an icy-looking dress made out of recycled plastic to draw attention to the melting glaciers in her country. Miss Puerto Rico Michelle Marie Colon, meanwhile, went for a dress that incorporated recycled plastic bags and bottles and other contestants also referenced nature and the environment in their outfits.

According to press reports, the local producers of the contest tried to convince its organizers to skip the traditional swimwear part of the show and opt for more modern sports gear instead. While they failed to do so, the producers did promise ahead of the competition that the swimsuit parade will be somewhat different this year. One contestant who did go against the flow was Miss Bahrain Manar Nadeem Deyani, who opted for a modest jumpsuit in the preliminary swimsuit round.

While there was only one Israeli contestant on the runway this weekend, Israel was widely represented in the fashion department, with designer Aviad Arik Herman being the creative mind behind the creations for seven different contestants. Herman created the looks for Miss Romania, Miss Sweden, Miss Japan and even Miss Morocco, among others, taking into account in each design the contestant’s national heritage and culture. Not for nothing was he crowned “Mr. Universe” in the local press!

Miss Universe projects a beauty idea that’s pretty far removed from most women’s day-to-day life, so it’s nice to be reminded in an honest and candid way that, well, no one woke up in the morning looking like this. In a recent interview cited by The National, Miss USA Elle Smith lambasted critics of the pageant, saying that “When I’m walking in a swimsuit, I’m showing the hard work that I do every single day to have a healthy body and a healthy lifestyle” – a frank reminder that the pageant does, after all, celebrate hard work and professionalism.

We can tsk at the contest all we want, but we do have to admit that it’s doing a great service for Israel’s image abroad. Not only is the country being constantly highlighted in a non-conflict-related way, but a global audience is now getting a glimpse at all the beautiful sights and people that Israel has to offer. Eilat, for example, is becoming a household name for all the Miss Universe fans out there, and we can only hope that it translates into incoming tourism when this whole Omicron business calms down.

Miss Puerto Rico Michelle Colón surprised her fellow Miss Universe contestants (and also @yadvashem staff) when she revealed that her great-grandfather was a Holocaust survivor, most of whose family perished in Auschwitz. pic.twitter.com/EPmNJAlCAk

Ahead of last night’s finals, the Miss Universe contestants toured up and down Israel, visiting Jerusalem, Tel Aviv, Acre and the Dead Sea. When they reached the Yad Vashem Holocaust Remembrance Center, Miss Puerto Rico Michelle Marie Colon surprised everyone present by sharing that her great-grandfather was in fact a survivor of Auschwitz who lost large parts of his family in the Holocaust before immigrating to the Caribbean. The emotional moment was caught on camera, giving audiences worldwide an opportunity to get to know Colon a little more than skin deep.

As only befitting an international contest taking place in Israel following the Abraham Accords, Miss Bahrain and Miss Morocco made a splash joining their fellow hopefuls in their tour of the country. For Bahrain, this was a debut Miss Universe appearance, while 2021 marked the first time in 43 years that the North African country sent a representative to the contest. We couldn’t be more honored.

UNCOVER ISRAEL - Get the ISRAEL21c
Weekly Edition free by email
Sign Up Now!
Bring Israel's story to life.
Millions of people around the world rely on us to gain a deeper understanding of Israel. We are the trusted source for original content you won't find anywhere else.
You can make a difference. Donate today to support journalism that brings Israel’s story alive.
SUPPORT ISRAEL21c
Read more on:   Culture, Eilat, Miss Universe