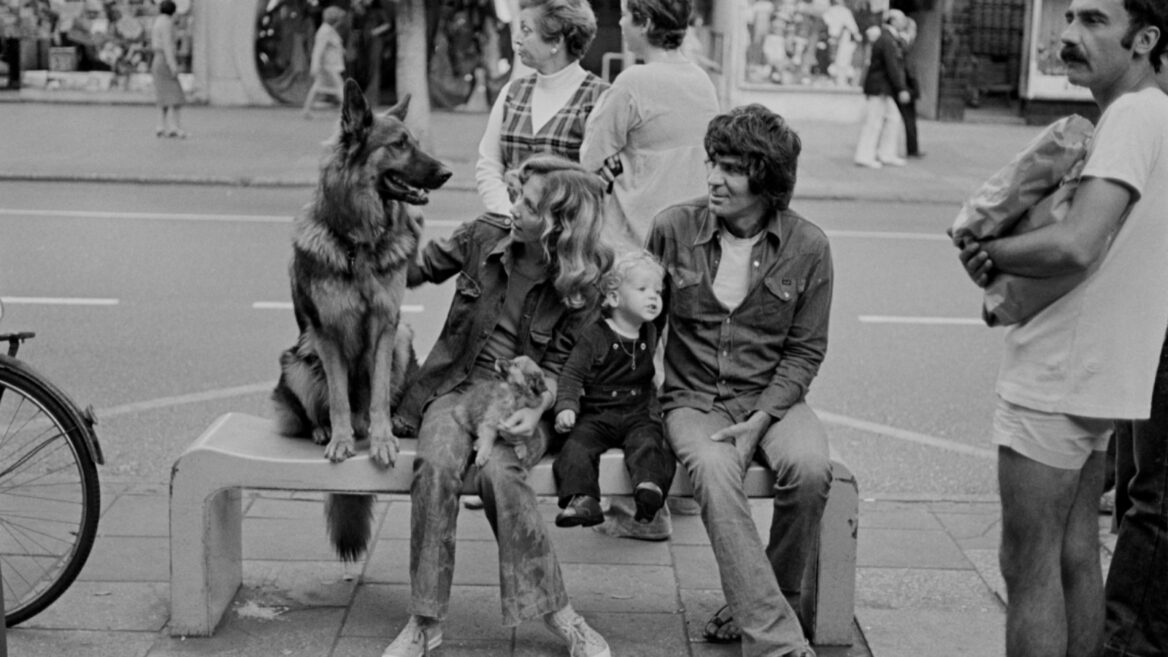 Back in the 1970s, Dizengoff Street in the heart of Tel Aviv was the place to be. Café culture, bohemian gatherings and some pretty outrageous fashions were all the norm on this long stretch of pavement and asphalt, which for many represents the very essence of the coolest times on the coolest street in Israel.

For veteran photographer Yael Rozen, it was also a huge source of inspiration.

“I was asked to shoot street fashion stories and that’s when I began wandering in Tel Aviv, particularly Dizengoff, because back then it was a central, alive and kicking street,” she recalls. 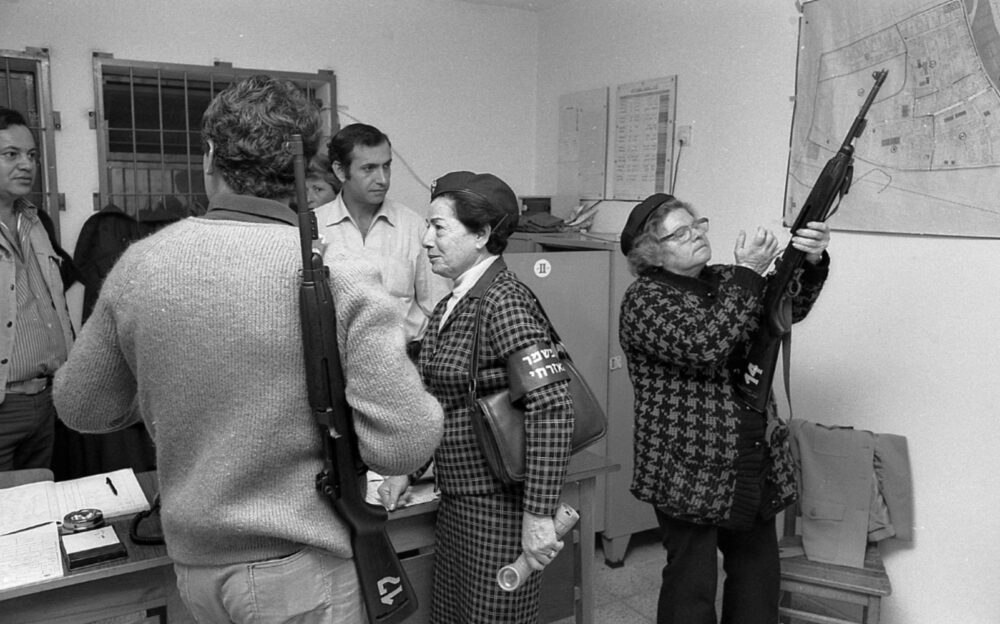 A Civilian Guard volunteer checks her weapon at the police station on Dizengoff Street in 1975. Photo courtesy of Yael Rozen

Dizengoff used to draw an eclectic mix of people, many of whom were firmly camped in one of two mythological cafes: Kassit and Pinati.

“At Kassit you could find all these people who were a little more famous – the bohemia, poets, artists, actors. And at Pinati there were all kinds of people who dressed really nicely,” she explains. 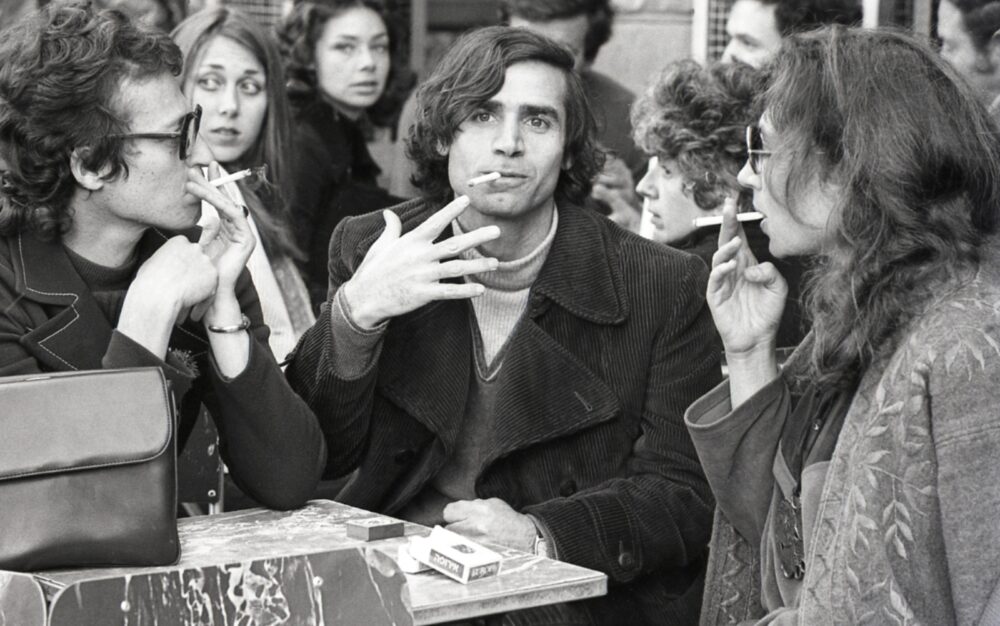 Author and filmmaker Prof. Gabriel Ben-Simhon, his wife and a friend enjoy a smoke at the famous Café Kassit in 1975. Photo courtesy of Yael Rozen

“Meanwhile, on the street there were many anonymous people that I didn’t know, and when I recently began publishing the photos on my Facebook page they began recognizing themselves and it was a really unique experience.”

“Throughout Covid I intensively posted these photos of Dizengoff and famous people whom I photographed, and it reached hundreds of thousands of people. If at first I had about 400 followers on Facebook, I now have around 20,000,” she reports. 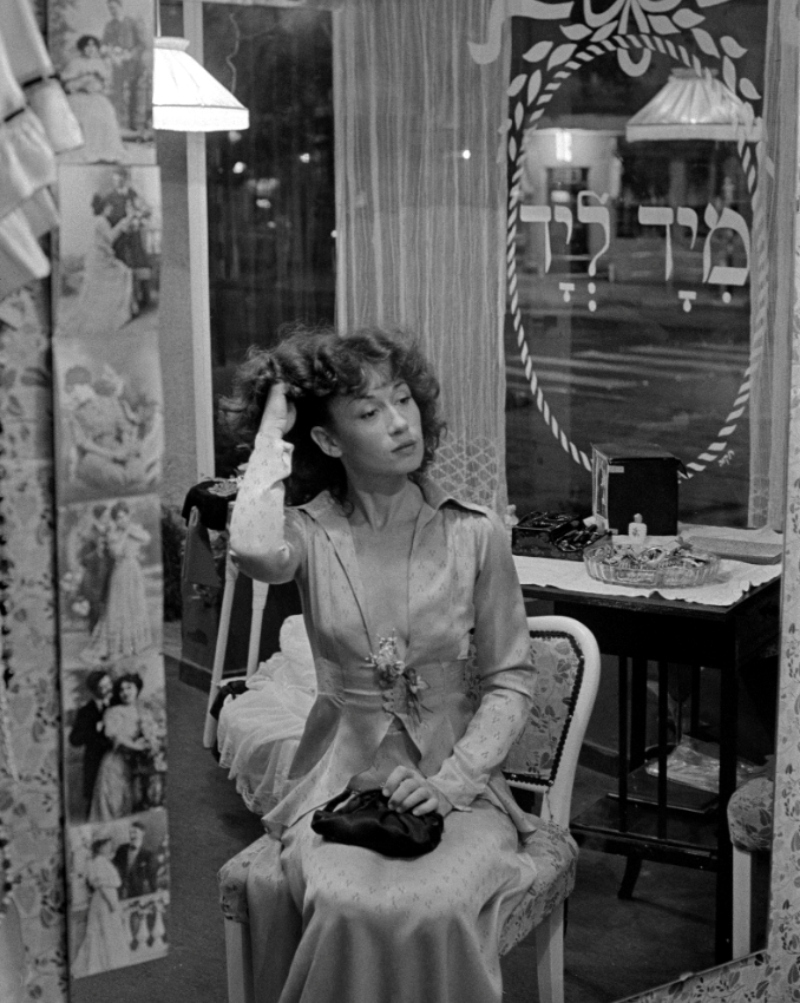 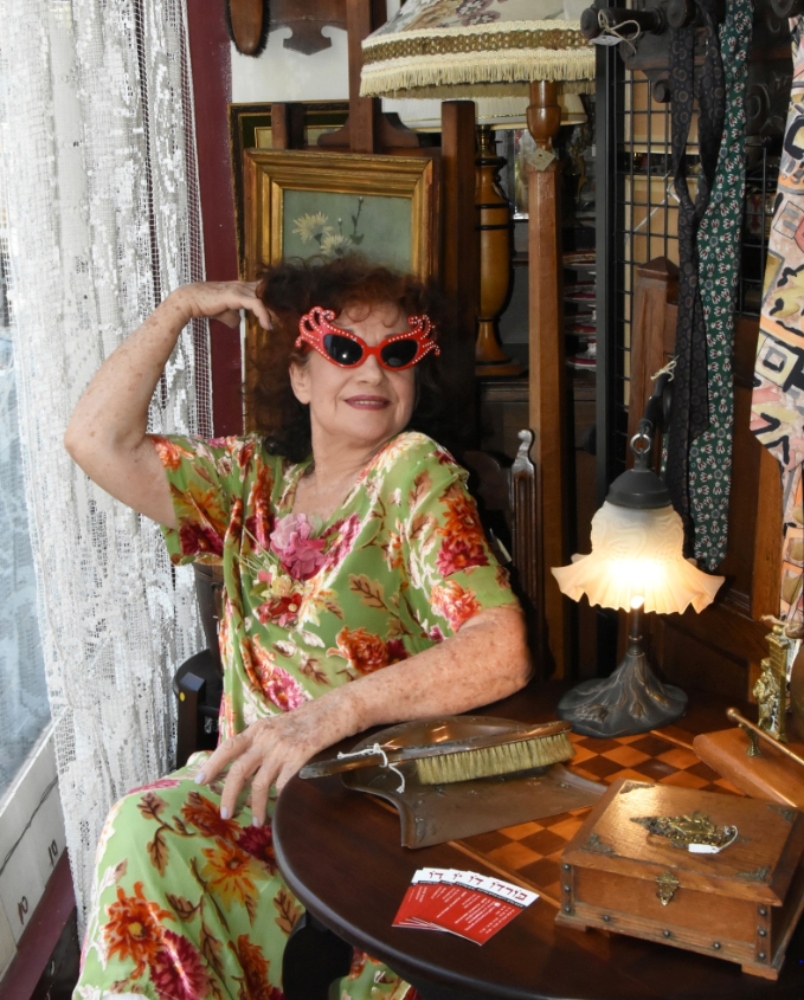 “And then Michal Suzana from Tel Aviv City Hall approached me. Someone turned her attention to these photos. They were just renewing Dizengoff Street and invited me to showcase my photographs in honor of the celebrations.”

The result is the outdoor exhibition “Dizengoff in Black and White,” which features 46 of Rozen’s historical pictures attached to electricity poles along the street. The exhibit was extended through the end of December by popular demand.

“The responses have been amazing, it’s just incredible,” Rozen says. 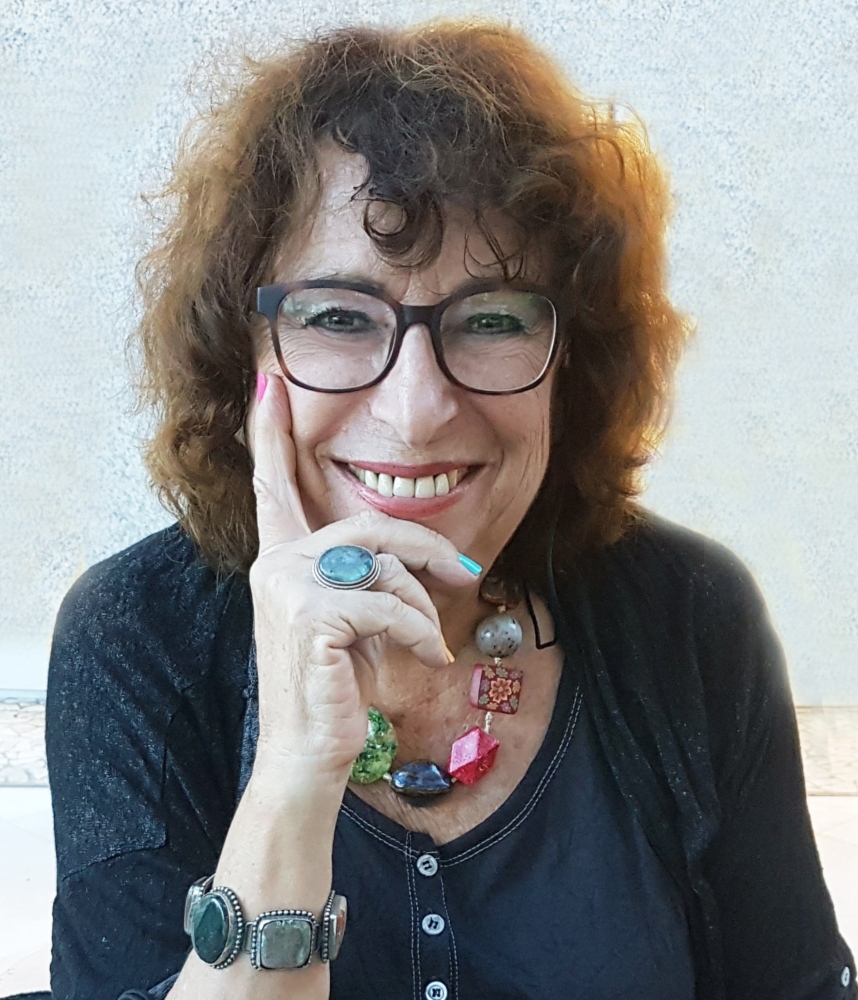 She finds that especially with the passage of time, the old photos “reflect the atmosphere of the street, the character of the people.”

Some of those people came forward and agreed to have their photo taken again, 50 years later – people like Miri Golan and Tzipa Agi.

Rozen had snapped a photo of the anonymous girls crossing Dizengoff. When she posted the picture on Facebook they were identified, and she did some detective work to find the now grown women and ask if they’d like to be photographed again.

“They were friends, but they lost touch, and thanks to my getting in touch with them they rekindled their relationship, so that was really nice.” 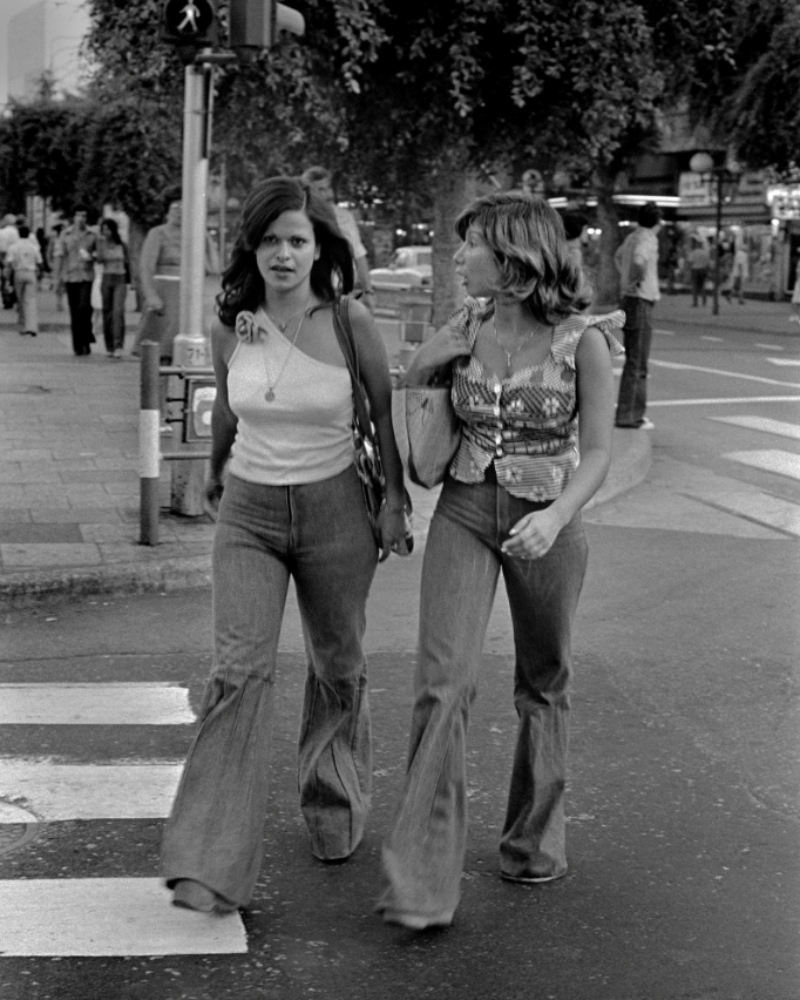 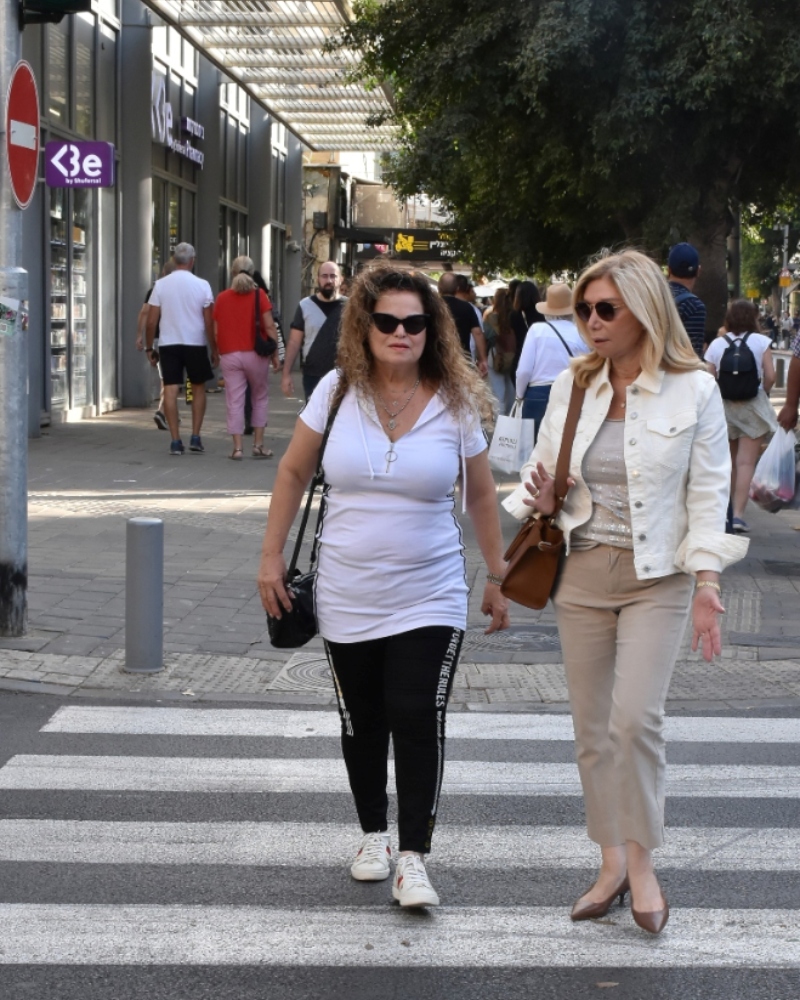 Chaim and Rina Ben Zvi, originally photographed as newlyweds walking their dog down Dizengoff, identified themselves on Facebook, and now have another happy photo many more decades into their marriage. 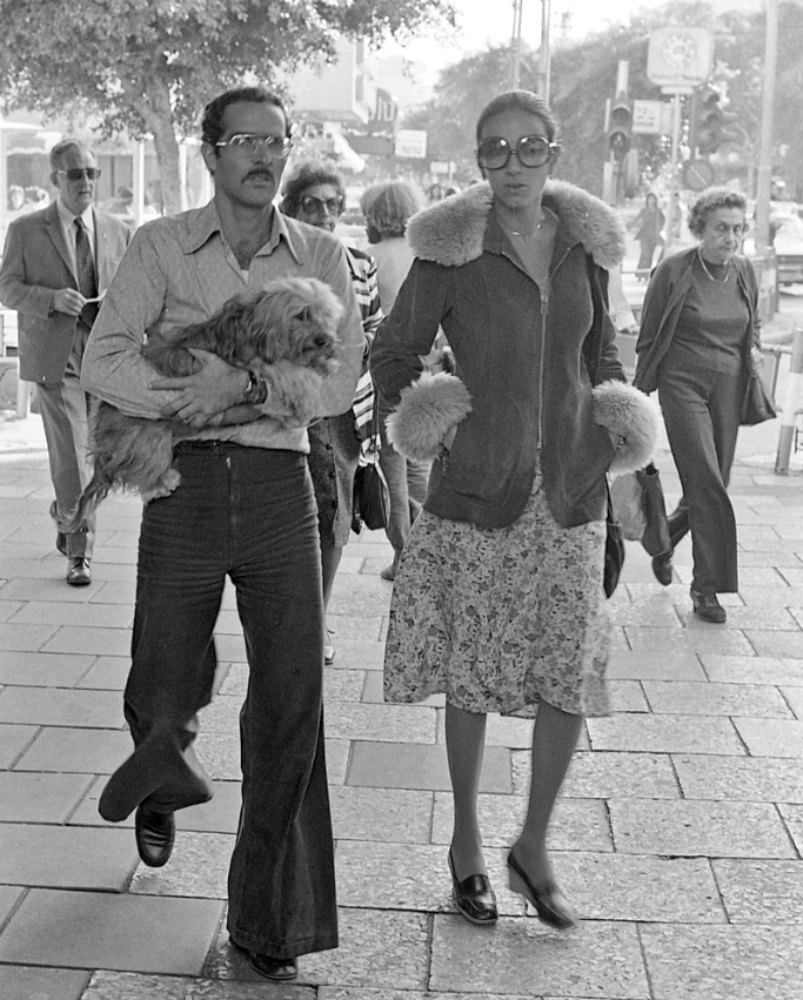 Chaim and Rina Ben Zvi with their pooch in 1975. Photo courtesy of Yael Rozen 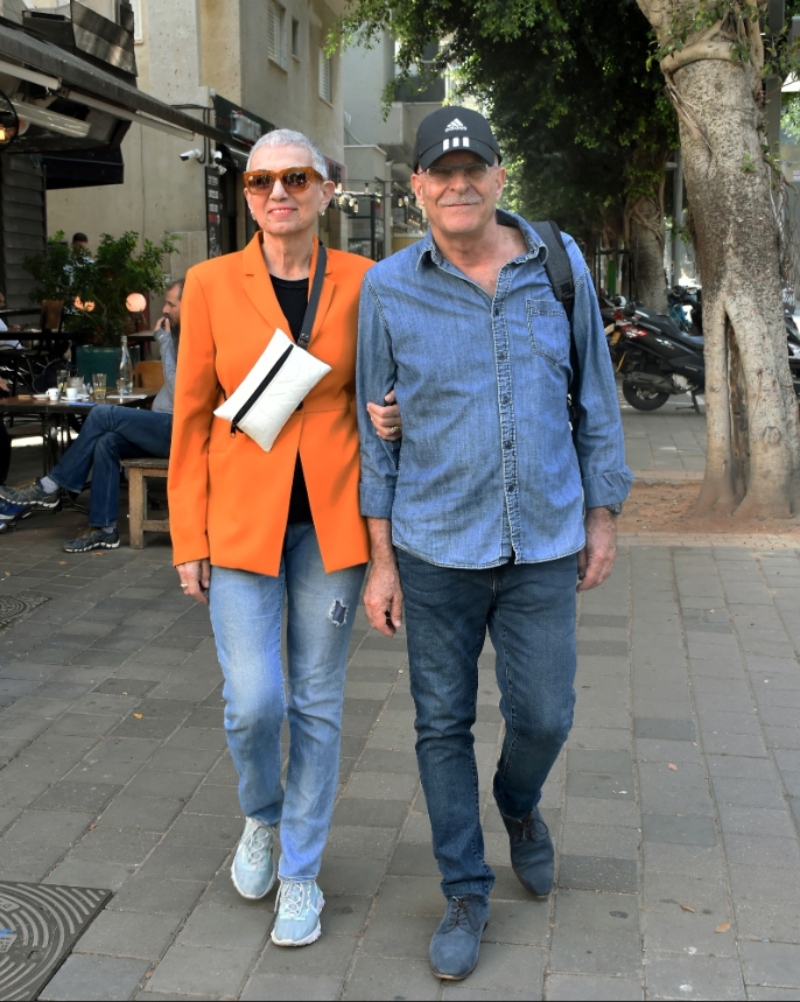 Chaim and Rina Ben Zvi with their pooch in 2021. Photo courtesy of Yael Rozen

Dizengoff Street underwent many changes in the past five decades, Rozen notes.

“For a very long time I found Dizengoff less attractive. But I went there again with the camera ahead of the exhibition, and I found a very colorful street. In terms of fashion, there’s a diversity in dress.”

There’s also a lot of activity and loads of cafés, she found.

“It’s not [like] Kassit — it’s now very scattered and there’s no concentration of people at a certain spot. I didn’t go there much at night, but I understand that there are lots of bars where young people have a nice time.” 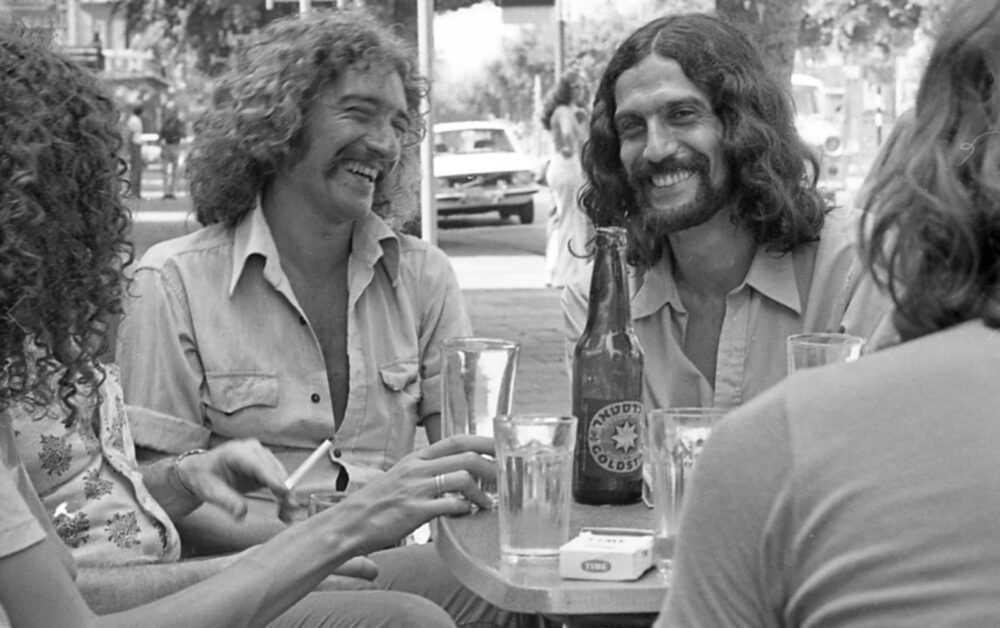 Members of the avant-garde artist group ‘’The Third Eye’ enjoy a beer at Café Kassit during the 1970s. Photo courtesy of Yael Rozen

Still, Rozen does have her favorite café on the street.

“I enjoy sitting at what used to be Pinati. It’s called Segafredo nowadays, but it’s still the café that it used to be. It changed a little, but it’s the most reminiscent of what there once was.”

UNCOVER ISRAEL - Get the ISRAEL21c
Weekly Edition free by email
Sign Up Now!
Bring Israel's story to life.
Millions of people around the world rely on us to gain a deeper understanding of Israel. We are the trusted source for original content you won't find anywhere else.
You can make a difference. Donate today to support journalism that brings Israel’s story alive.
SUPPORT ISRAEL21c
Read more on:   Spotlight on Israel, Culture, Israeli photographers, Dizengoff Street