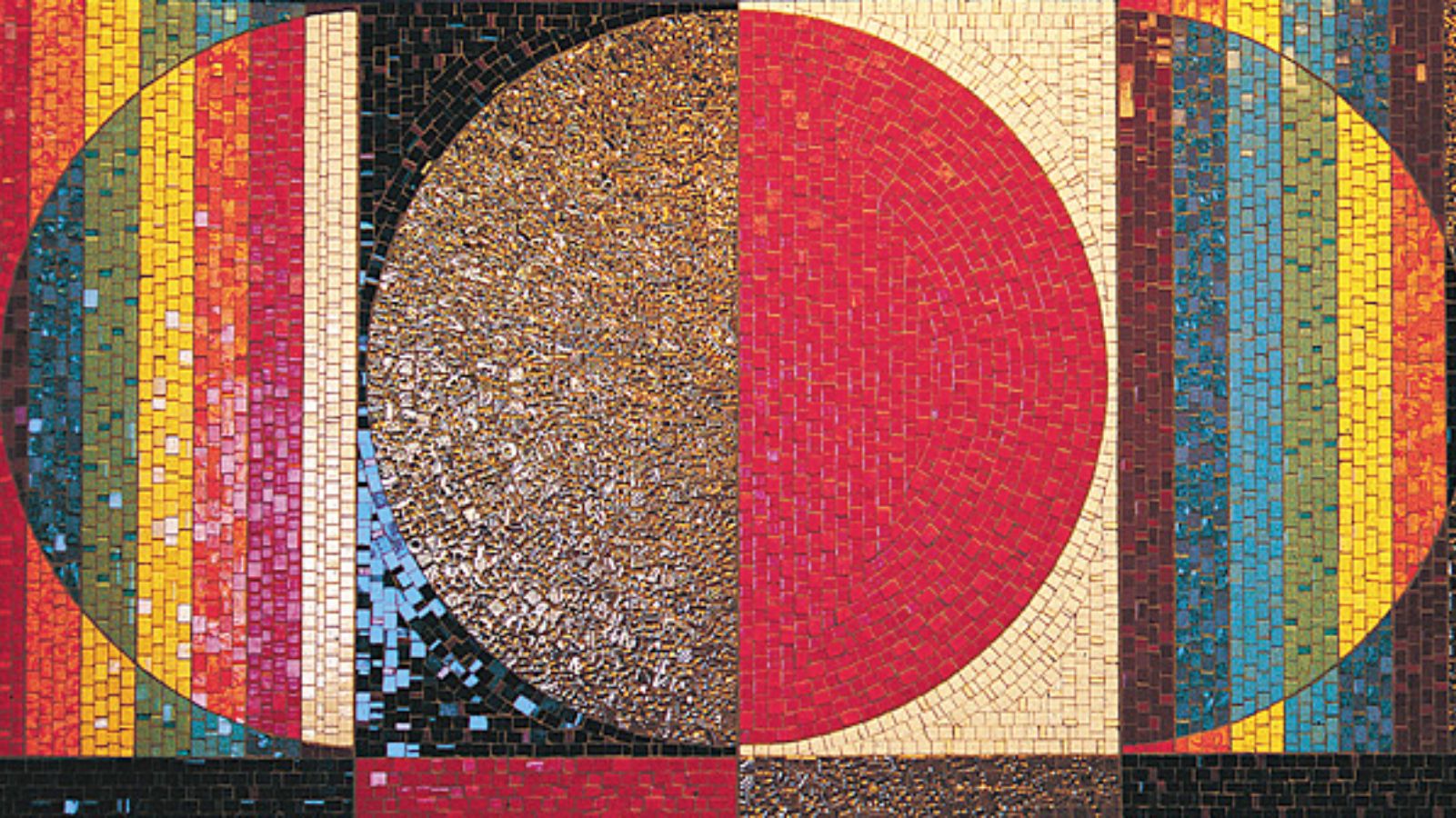 The Day and Night mosaic at Ben-Gurion University of the Negev was created by Lev Syrkin, whose many modern mosaics embellish buildings across Israel. Photo courtesy of the artist’s family/Wikimedia Commons
#PiecesOfArt

From memorials to people and places to celebration of hard work and faith, the modern mosaics of Israel tell a fascinating story.

As you may remember from our story on the magnificent ancient mosaics of Israel, the country is chockablock with this antique form of art.

Turns out, however, it’s not only 2,000-year-old works of art that grace the floors and walls of our buildings and public places. Thoroughly modern mosaics also make a prominent statement throughout Israel.

Here are 10 of the most striking modern Israeli mosaics for you to admire from a distance or, Covid-permitting, in real life. 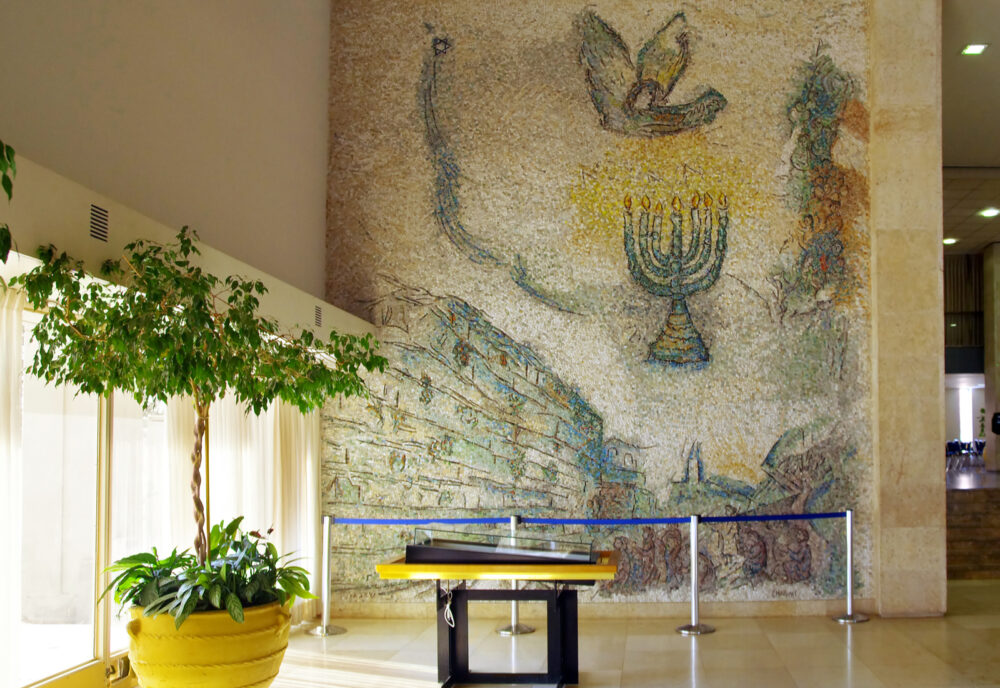 A mosaic by Marc Chagall in the foyer of the Knesset in Jerusalem. Photo by Irina Opachevsky, Shutterstock.

The 12 mosaics featured here, created in the 1960s by world-renowned artist Marc Chagall, boast the most prestigious setting on this list – the fourth floor of Israel’s Knesset. They borrow from the themes that appear in the ancient mosaics found in fifth- and sixth-century synagogues in the country, and as such include images such as fruit, animals and vegetation.

The stones for these floor mosaics come from all over Israel: the light-colored ones from Jerusalem, the black and brown from northern Israel and the green and blue from the Timna quarry near Eilat in the south. The yellow and orange pieces are Murano glass from Venice. 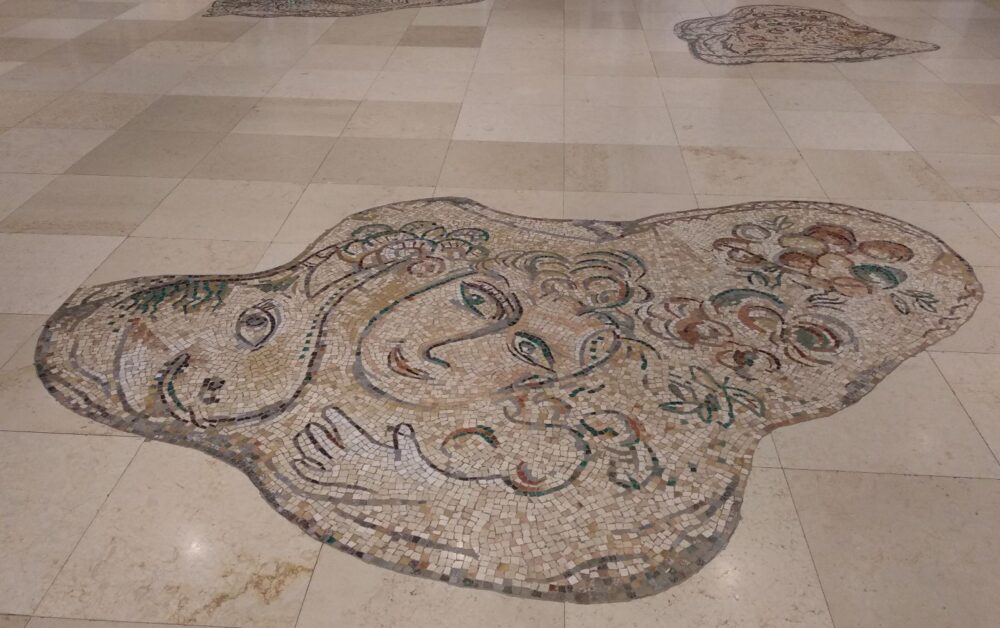 One of the floor mosaics created by artist Marc Chagall for Israel’s Knesset. Photo by Nizzan Cohen/Wikipedia 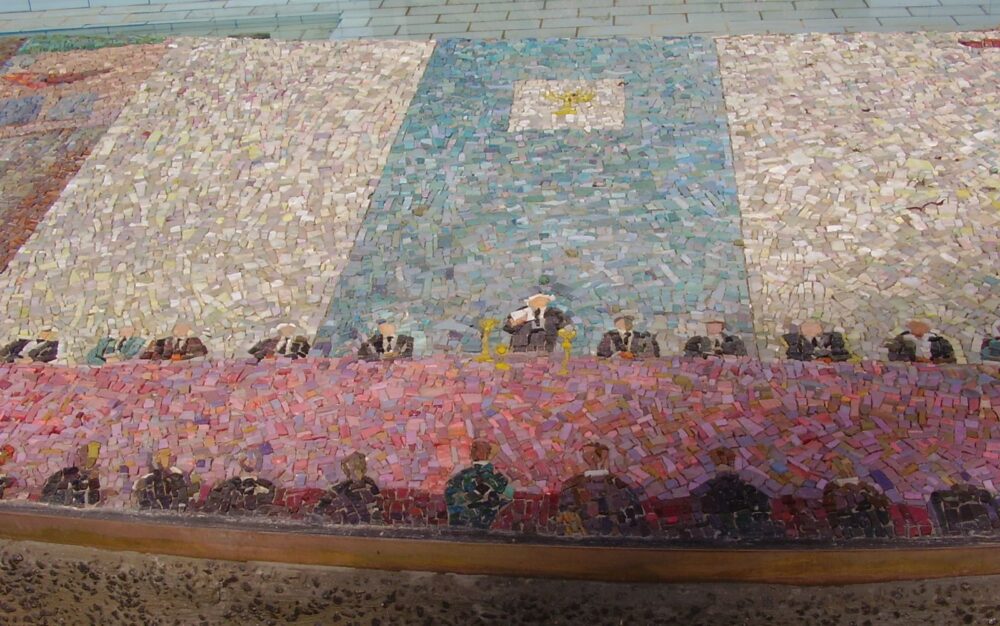 The declaration of the State of Israel in 1948, as depicted in a mosaic by artist Nahum Gutman.Photo courtesy of Dr. Avishai Teiber/Wikimedia Commons

Nahum Gutman was one of the most prominent artists in pre-state and early Israel, and is especially known for his depictions of the Land of Israel. Among his many works are also many mosaics, including this one depicting the history of Tel Aviv and Jaffa from the days of Jonah the Prophet to Israel’s declaration of Independence, marking along the way occasions such as Napoleon’s sojourn to the area and the early 20th century café culture in the city.

Gutman’s intricate and large-scale mosaic was originally positioned in front of the old City Hall in downtown Tel Aviv, but now stands at the beginning of Rothschild Boulevard, not far from the delightful museum bearing his name. 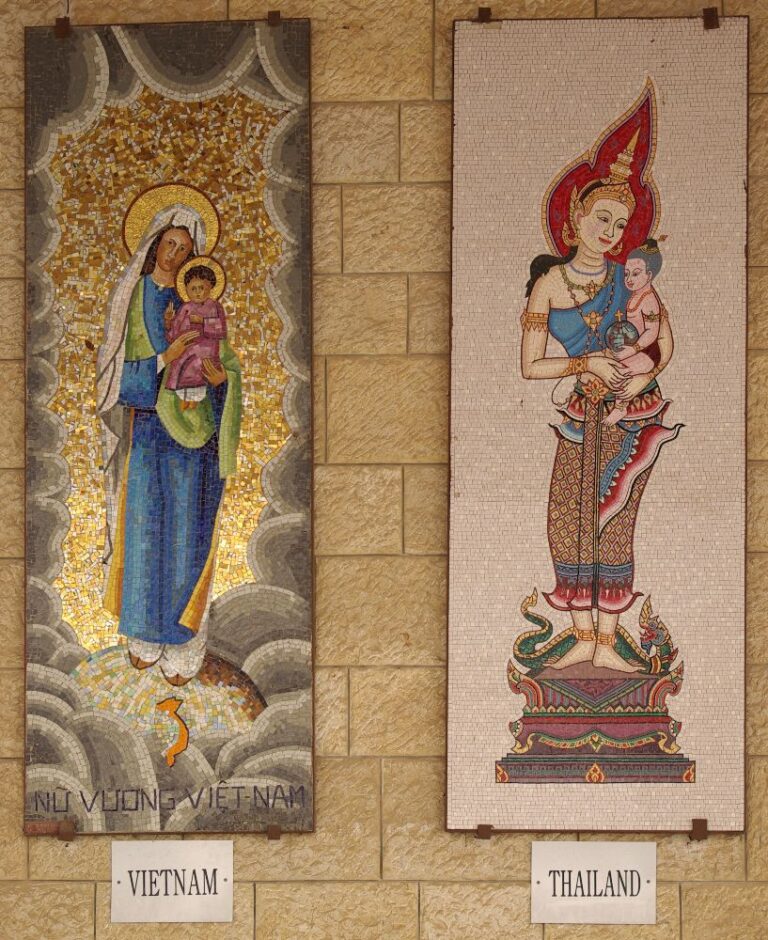 The portico at the Church of Annunciation in Nazareth holds multiple mosaics donated by countries around the world depicting the Madonna according to local tradition. Photo courtesy of Berthold Werner/Wikimedia Commons

The present-day Church of the Annunciation is a modern basilica built over the remains of ancient churches marking the place believed to be home of the Virgin Mary. And since the church is relatively new, so are the mosaics that decorate it.

The church’s portico has a large display of images of the Madonna created by communities from all over the world, each representing their culture and aesthetics. Together, they emphasize the universality of faith, and make for a fascinating tour. 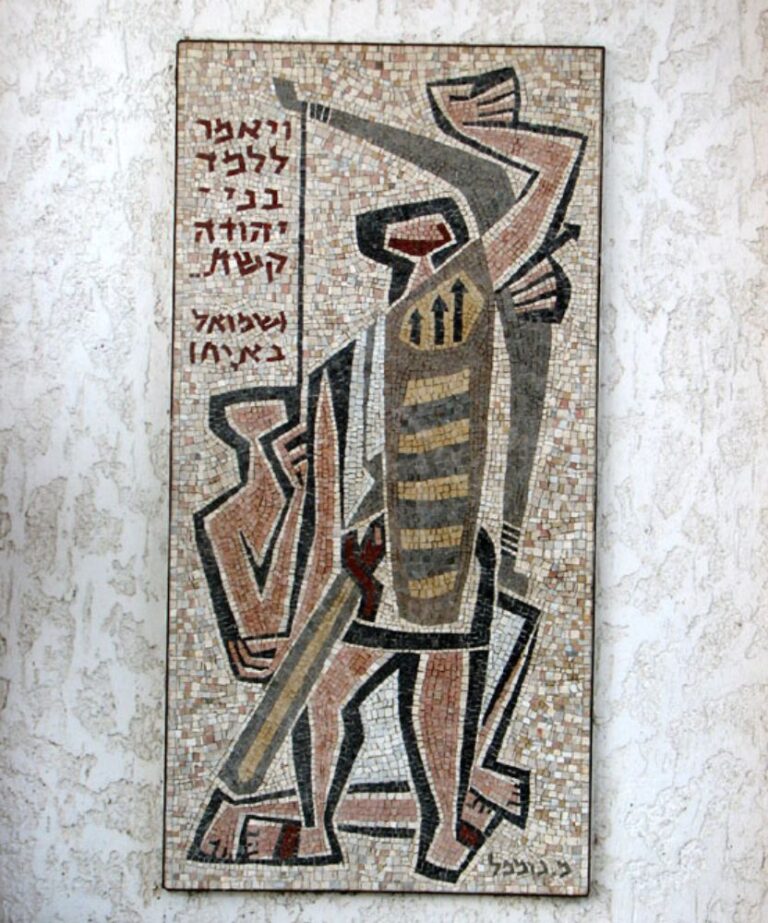 A biblical-themed mosaic at the entrance to the Yad Labanim memorial center in Petah Tikva, created by artist Mordechai Gumpel. Photo by Michael Jacobson/Wikipedia

Almost every city in Israel has a public building called Yad Labanim, a memorial center for its fallen soldiers. In the central city of Petah Tikva, the Yad Labanim building is adorned by a series of mosaics created by prominent mosaic artist Mordechai Gumpel that draw on biblical scenes and stories. The mosaic shown here includes a verse from King David’s lament after the death of Saul and Jonathan, often recited at Memorial Day ceremonies. 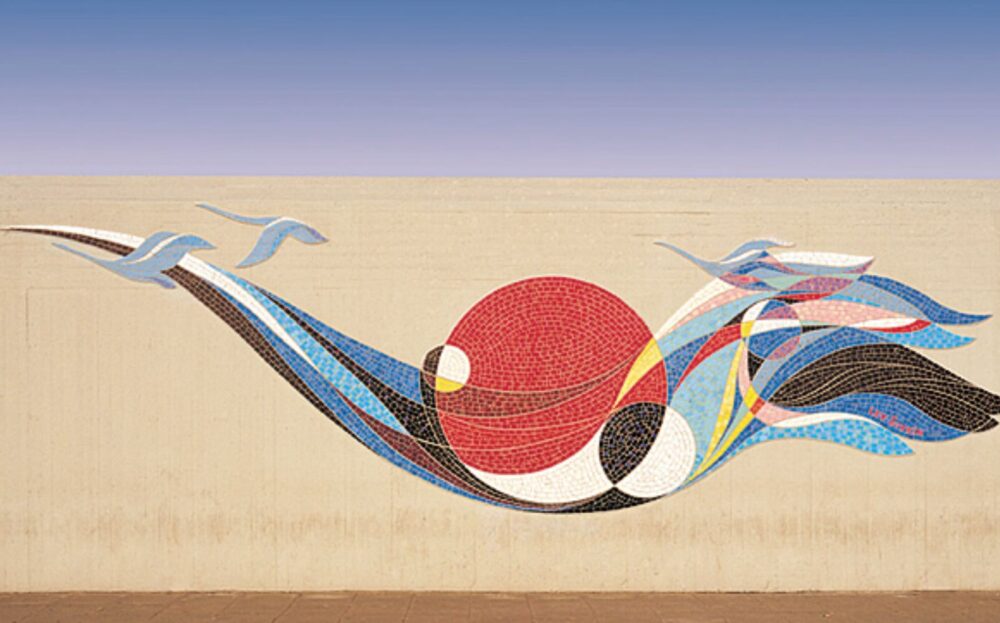 The Bird of Dawn mosaic by artist Lev Syrkin at the Ashdod Oil Refineries. Photo courtesy of the artist’s family/Wikimedia Commons

The Bird of Dawn mosaic is situated in a slightly surprising location – the oil refineries in the southern coastal city of Ashdod. The large and colorful mosaic, experts say, was stationed there to lift the spirits of passersby and of factory employees. It was designed by Lev Syrkin, a prominent Israeli-Russian artist who created many dozens of mosaics and hundreds of other works of art that have been displayed around the world, including some of the largest mosaics in Europe and Israel.

Check out another one of his stunning mosaics at the top of the page. 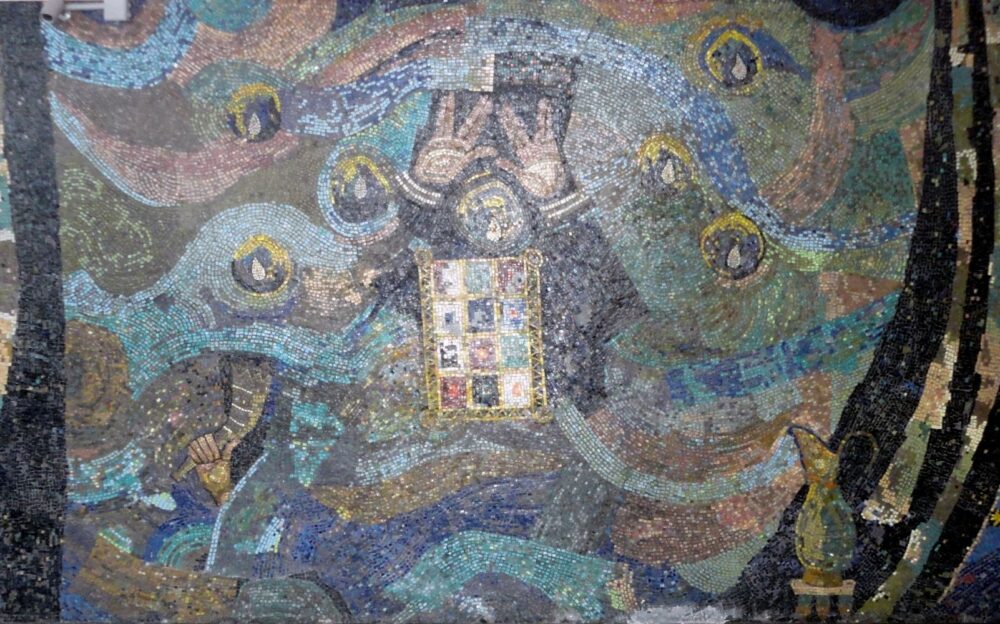 Another work of Nahum Gutman, this large mosaic depicting the Jewish Priestly Blessing hangs in the Tel Aviv Rabbinate building. The blessing involves the raising of joint hands as seen in the mosaic, where it is surrounded by other religious elements such as a shofar, the priestly breastplate of precious stones, an oil urn and seven candles representing the seven-branched candelabra. The mosaic was created in the Italian city of Ravenna based on Gutman’s plans and was erected in Tel Aviv in 1961. 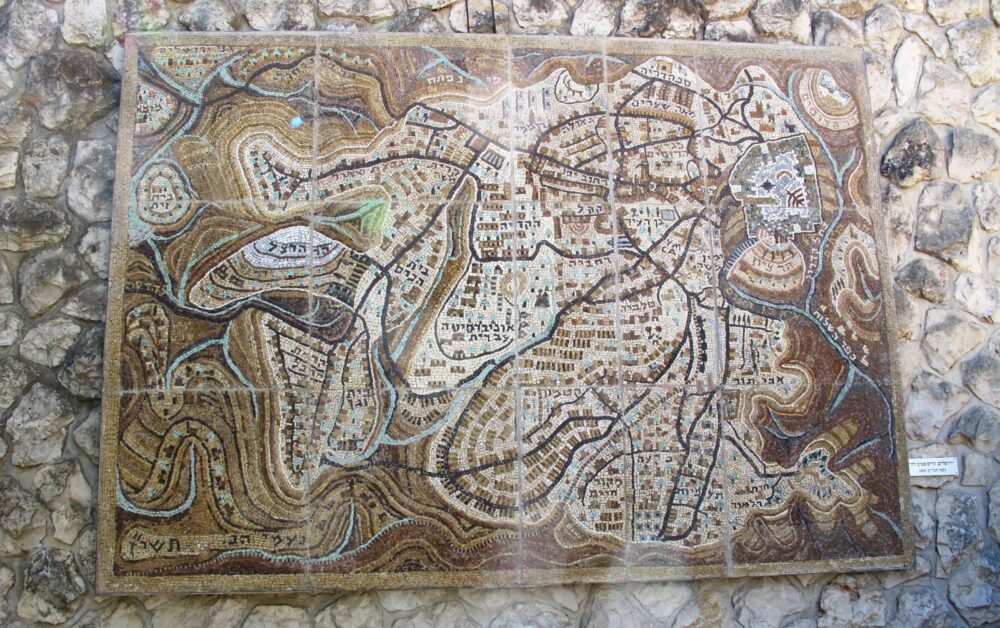 The wall mosaic depicting the different neighborhoods of Jerusalem atop Mount Herzl was created by artist Naomi Henrik. Photo by Michael Jacobson/Wikipedia

The Jerusalem mosaic that appears at the entrance to Mount Herzl in the capital was created by artist Naomi Henrik, best-known for her monument in memory of the breakthrough to Jerusalem during Israel’s War of Independence. The modern take on the city’s map includes landmarks such as the Jerusalem International YMCA, the Hebrew University campus and, of course, Mount Herzl as well as the city’s principal neighborhoods. 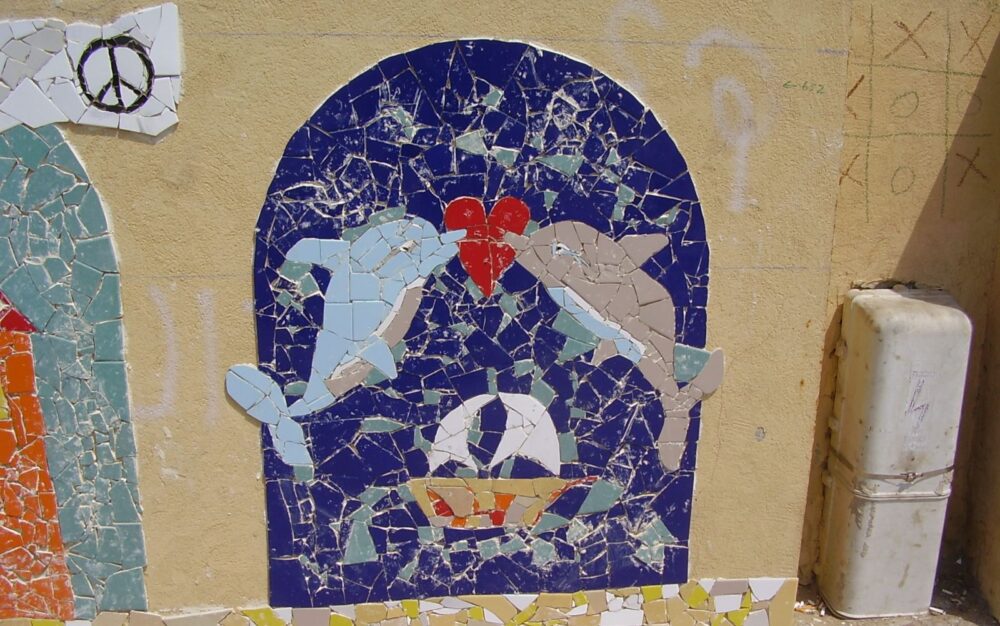 A part of the Peace Wall mosaic that decorates a building in the Arab-Jewish city of Jaffa. Photo by Dr. Avishai Teiber/Wikimedia Commons)

Created as part of the international CITYarts project, the Peace Wall in Jaffa’s Ajami neighborhood is the work of Arab and Jewish artists, schoolchildren and volunteer residents. It depicts themes such as olive branches, local landmarks, people shaking hands and, somewhat surprisingly, dolphins. The process was preceded by numerous workshops across schools in the area, which sought to create dialogue and cooperation between the city’s children and teens. 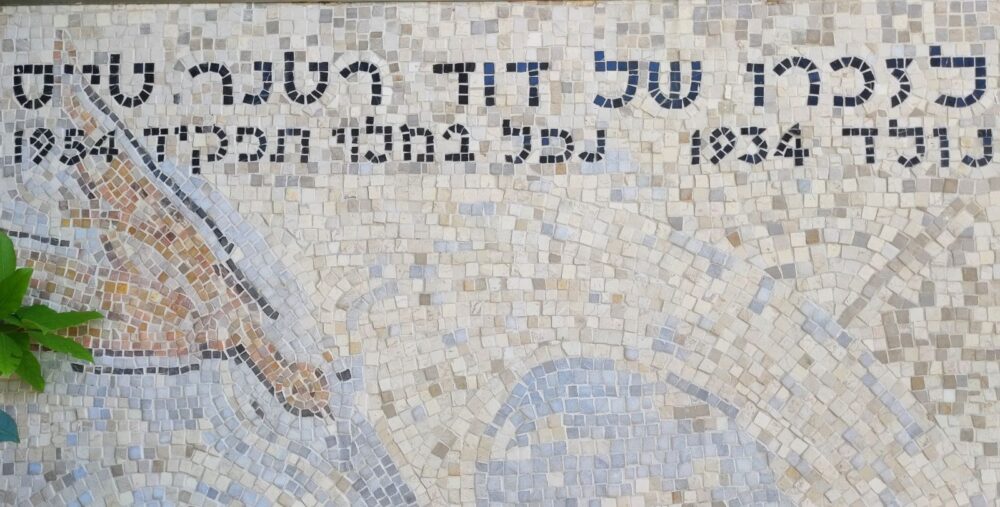 The mosaic in memory of David Ratner at the Technion’s aeronautics engineering building, which was built by his father, Prof. Yohanan Ratner. Photo courtesy of Technion – Israel Institute of Technology

Back in the early 1950s, architect Yohanan Ratner was in the middle of the construction of the aeronautics engineering building at the Technion – Israel Institute of Technology in Haifa when his 20-year-old son, David, was killed during his military service as a pilot. Following the incident, Ratner asked prominent artist Israel Rubinstein to create a mosaic in his son’s memory. The result is the peaceful-looking and quiet work of art that adorns the building to this day. 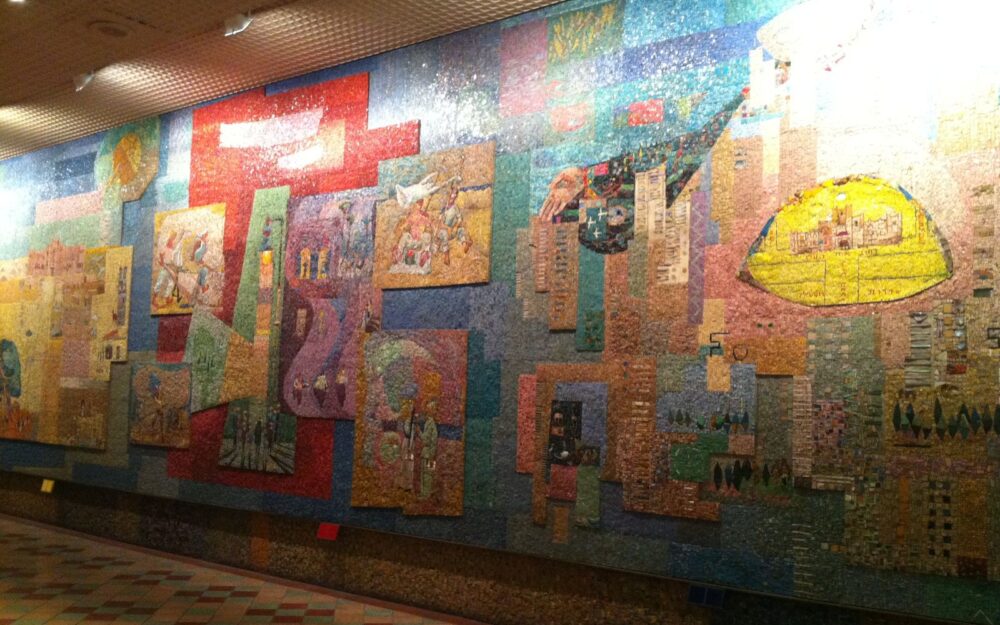 The large wall mosaic depicting the beginning of the city of Tel Aviv, created by resident and artist Nahum Gutman. Photo by Itzuvit/Wikimedia Commons

Finishing off this list is another Tel Aviv mosaic by famous city resident Nahum Gutman. The Herzliya Hebrew Gymnasium used to stand at the beginning of Rothschild Boulevard, where nowadays the Shalom Tower, well, towers. The gymnasium was founded at the turn of the 20th century and was the first Hebrew high school in pre-state Israel, boasting notable alumni including Gutman himself.

Its demolition caused quite a controversy in Israel, and the building is commemorated through this huge, 300-foot-long mosaic depicting the four stages of the city’s evolution. First appears the old port of Jaffa, followed by Achuzat Bayit, the first neighborhood of the new city of Tel Aviv. These are followed by images of the construction of the city and then its gradual growth in the 1930s and 1940s, which also feature the gymnasium.