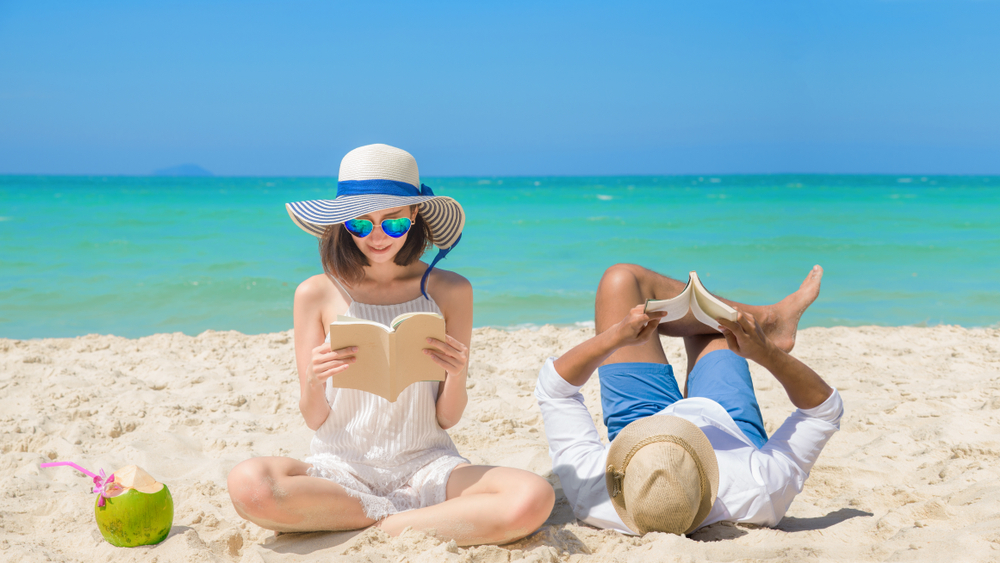 There’s nothing like a good book to transport you elsewhere. Photo by IamAnupong/Shutterstock.com

Summer vacation is one more item on a very long list of things that the coronavirus crisis has ruined. Instead of traveling to beautiful destinations and sunning ourselves on the beach, this year’s summer months are likely to be spent more mundanely and closer to home.

Luckily, a good book can transport you elsewhere. Our suggestion: sit back (yet again) on your couch, leave Netflix alone and pick up one of these great Israeli books to while your time away. Just don’t forget your poolside cocktail.

1. My Wild Garden: Notes from a Writer’s Eden by Meir Shalev

A perfect summer read, My Wild Garden is celebrated novelist Meir Shalev’s most recent offering. An ode to his beloved garden in the Jezreel Valley, it’s a collection of short musings, gardening insights, memories and even a recipe for curing olives. Shalev’s stories are accompanied by beautiful nature illustrations that make it all the easier to believe we’re actually outside.

Nothing says vacation like a good crime fiction work. The English-language edition of crime writer and literary scholar Dror Mishani’s latest novel, Three, is due out in July, just in time to invigorate that mid-summer slump. So as not to create any spoilers, we’ll just say that the plot centers around three seemingly unrelated women and one mysterious man. Enjoy!

3. The Art of Leaving by Ayelet Tsabari

If you’ve read Ayelet Tsabari’s previous work, you’ll know she writes beautiful and poignant short stories and essays. Tsabari’s most recent book, The Art of Leaving, is a memoir in essay form that opens with the death of her father when she was only nine years old and continues with her consequent struggle to find roots and to embrace herself and the history of her family, descended from Yemenite Jews whose culture and traditions were suppressed upon arrival in Israel.

4. A State at Any Cost: The Life of David Ben-Gurion by Tom Segev

Oddly enough, some people love nothing better than utilizing poolside leisure for getting through serious, historical non-fiction. A great option for weighty tome lovers would be journalist and historian Tom Segev’s A State at Any Cost: The Life of David Ben-Gurion. Segev takes a lengthy look at Israel’s first prime minister and, basing himself on numerous historical sources, analyzes Ben-Gurion’s life, achievements, controversies and character.

5. The Orchard by Yochi Brandes

Not the newest book on the list, but a personal favorite, and one just right for people wanting to indulge in a bit of history without having to do the heavy lifting required in the item above. Yochi Brandes’ The Orchard centers on Rachel, the long-suffering wife of the historic Rabbi Akiva, as well as on a tumultuous and formative period of Jewish history, intertwining the personal and the societal, love lives and scholarly work, in the process giving new relevance to old stories.

Famous Israeli writer Etgar Keret’s most recent collection of short stories, Fly Already, is made up of the stuff that made him a household name: fluent, fun writing about absurd and fantastic situations that deal with very real-life problems. The winner of the prestigious Sapir Prize, the collection of stories confronts issues such as loneliness, detachment and people’s search for intimacy and love, again in a beautiful, page-turning style.

7. The Tunnel by A.B. Yehoshua

Literary giant A.B. Yehoshua’s latest novel, The Tunnel, tells the story of a retired road engineer who is beginning to lose his memory and volunteers to work on a secret army road in the desert to keep himself active. Once there, a mystery unveils about the people living where the road is being constructed. With his usual thoughtful style, Yehoshua touches on illness, married life, the nature of memory and the interwoven identities of Israeli Jews and Palestinians.

8. The End of Love: A Sociology of Negative Relations by Eva Illouz

Sociologist Eva Illouz is well-known in Israel for writing about love, capitalism and everything in between. Her most recent work, The End of Love, deals with “unloving,” the ways in which relationships end and why social bonds dissolve. Here too, she tackles the effects of capitalism on our way of thinking and going about our relationships. Perhaps not the cheeriest of books, but fascinating nonetheless.

9. Spies of No Country: Secret Lives at the Birth of Israel by Matti Friedman

A real eye-opener, Matti Friedman’s latest book is the first English-language account of the pre-state Arab Section intelligence unit. It follows the life and work of four spies of Middle Eastern origin who assumed Arab identities and went undercover in Beirut where they sent intel back to a nascent Israel. The book is based on interviews Friedman conducted with one of the four spies, already in his old age, making the work a first-hand account of a different world and era.

10. The Last Interview by Eshkol Nevo

Eshkol Nevo’s latest novel, The Last Interview, was published in Hebrew in 2018 and is set to be released in English in October this year. Nevo tells the story of an author who’s answering a set of questions sent to him for an interview. What at first glance looks like a rather mundane task turns out to be a soul-baring exercise about love, life and relationships. Definitely one to look out for when summer is winding down.