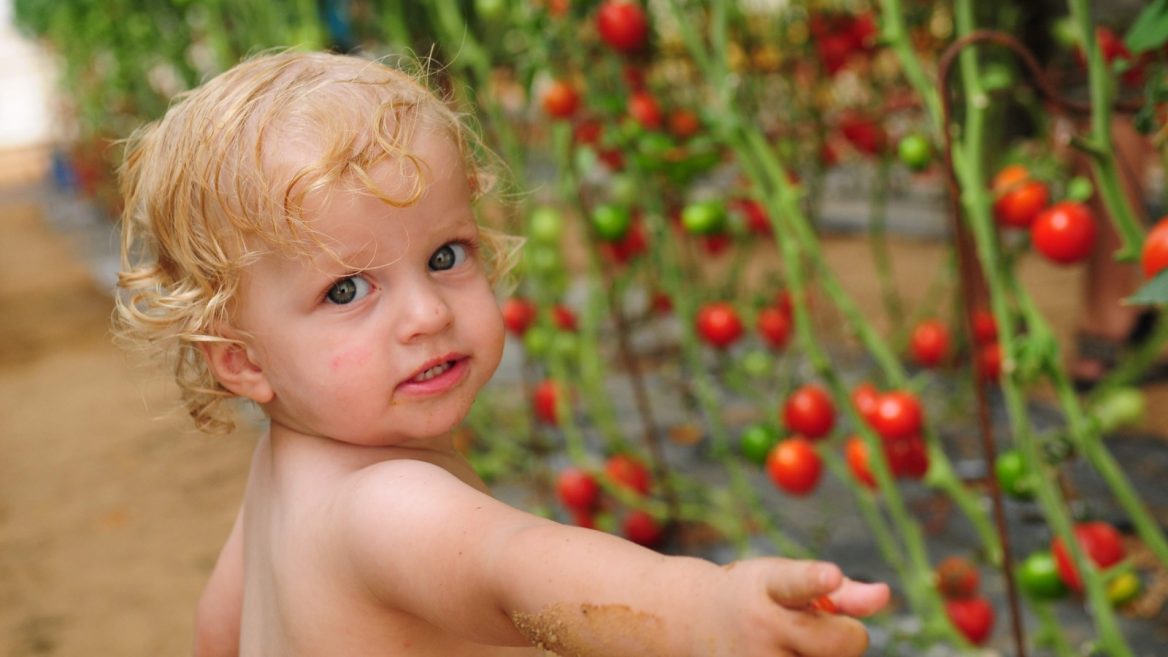 On the Salad Trail in Moshav Talmei Yosef, near the Gaza border. Photo: courtesy

We’ve all heard about the unfortunate security situation in the  50 or so communities that border Gaza in southern Israel’s Western Negev, but did you know that there’s also a lot of interesting and fun activities there that make this a most unusual and rewarding place to visit?

Incoming rockets and incendiary terror may be the order of the day sometimes, but the rest of the time the communities in the Gaza Envelope (Otef Aza, in Hebrew), offer a different pace of life and an opportunity to experience Israel in an alternative, and often meaningful way.

Aside from opportunities to learn more about daily life in Sderot and the surrounding villages, or to see peace projects at work, there are ostrich farms, wineries and cheese tastings that will all help you leave a little bit of your heart in a place that needs it sorely.

We’ve gathered up the best experiences the area has to offer to bring you a list of 10 great reasons to visit Israel’s Gaza border communities — some of them are serious and hard hitting, others lighthearted, uplifting, and fun. 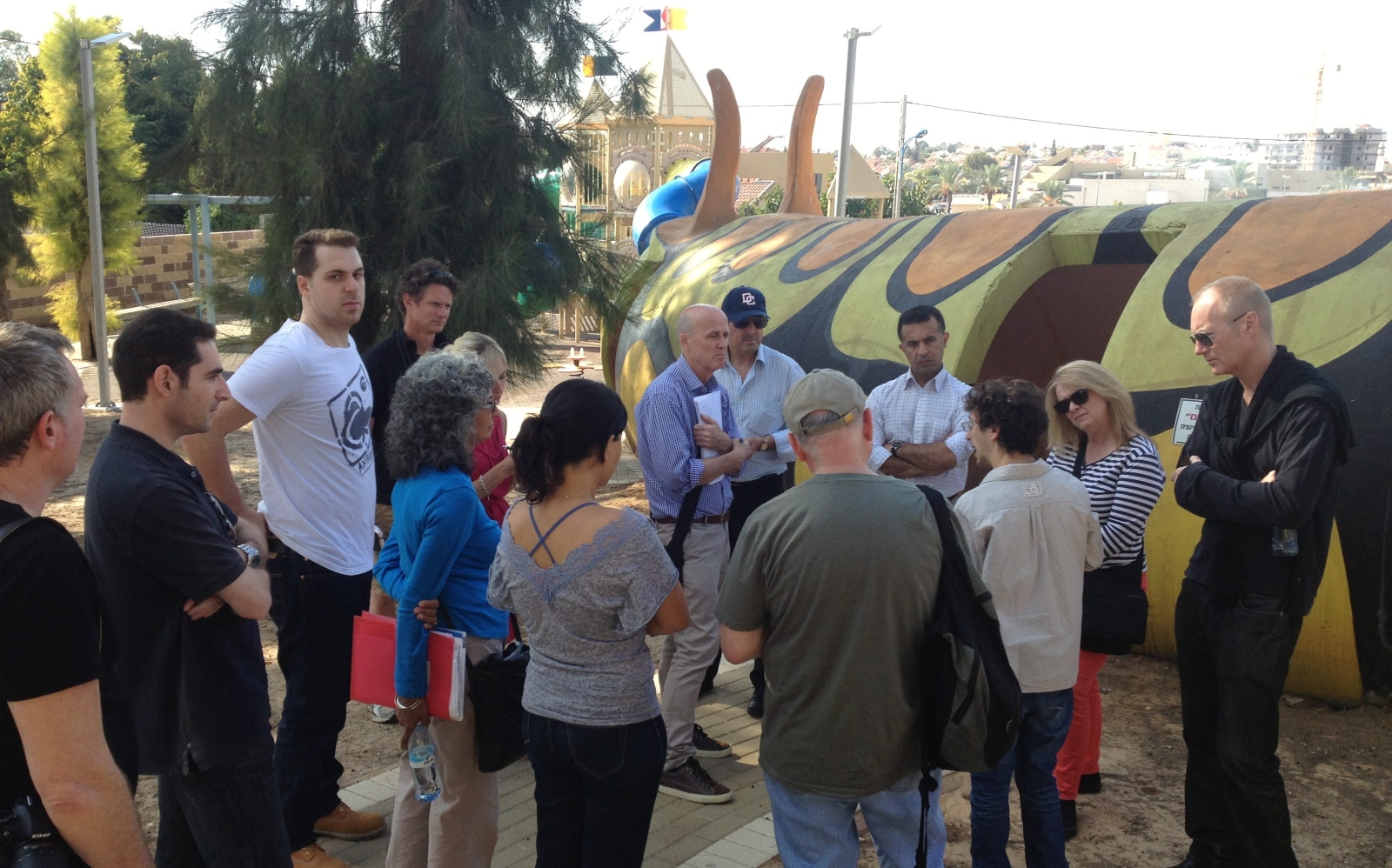 First things first: A visit to this sensitive area requires you to take a moment to reflect on the conflict at hand. Doing so may not always be easy, but it will put things into perspective before you continue your journey in this unique area of the country.

Lookouts and memorials for fallen soldiers such as the Asaf Siboni Lookout are excellent places to get your bearings upon arriving in the region. There you’ll find a clear vantage point into the Gaza Strip and learn the story of Asaf Siboni, an IDF soldier from the adjacent Nir Am kibbutz, who died tragically in a helicopter crash in 1997. Despite the harsh realities reflected here, it is a peaceful spot with a water reservoir and wind flutes that provide a soothing backdrop.

Just up the road along the same water reservoir sits another well-kept military heritage/memorial site. The Black Arrow Memorial commemorates an IDF operation against the Egyptian army in Gaza in 1955. The spot also has a clean area with picnic tables, as well as a direct view of Gaza City.

Not far away, in the famous city of Sderot, is the Sderot Media Center for the Western Negev, which condenses the whole Sderot experience into one guided informative afternoon. Started by director Noam Bedein in 2007, the organization spreads awareness of the daily struggles of those living on the Gaza border through media projects and connecting foreign visitors with people from Sderot for guided visits.

Tours include viewing sites that have been damaged by rockets, the new fortified train station, underground operation center, fortified children’s playgrounds and schools, the Iron Dome defense system, the city’s “Qassam rocket gallery” and police station, lookouts, and many more points of interest, which are put into perspective through the personal stories of the local guides.

If you’d rather go it alone, a visit to Sderot’s famously fortified playgrounds, both indoors and outdoors, will help you understand life in Sderot from the perspective of a child.

The Wishes Playground is known for its easily accessible above-ground bomb shelter built in the shape of a colorful caterpillar. 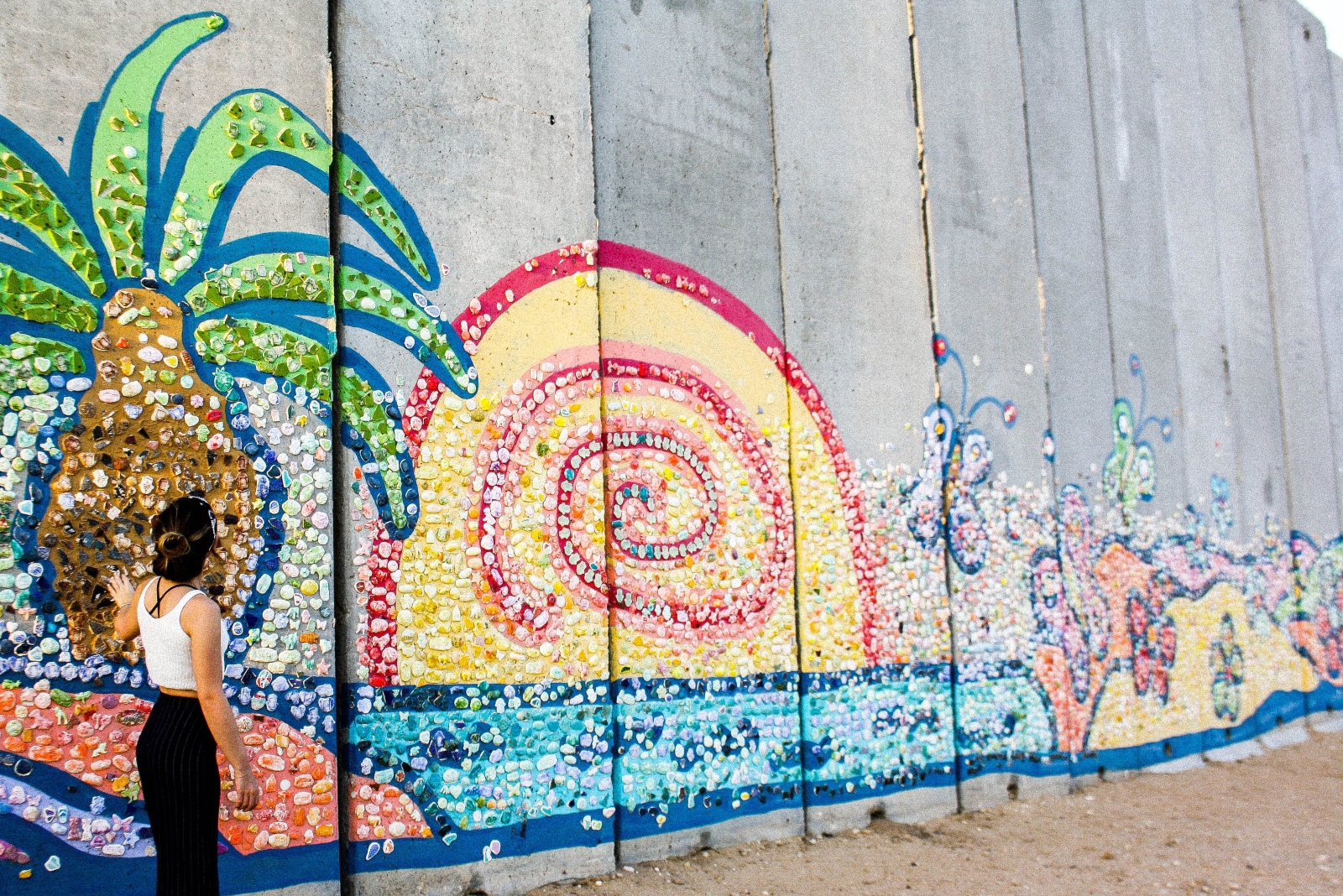 Now that you’re well informed, it’s time to channel your energy into something positive, like the Path to Peace Wall Mosaic at Kibbutz Netiv Ha’asara.

Headed by local kibbutz resident and artist Tsamaret Zamir, this ongoing collective mosaic project decorates the security wall between the Gaza border wall and the kibbutz with messages of love and peace. Visitors hear Zamir speak about life on the border, watch a movie about life in a Gaza border community, and tour the kibbutz before inscribing their own small ceramic piece with well wishes and adding it to the mosaic.

Pieces are comprised of objects that carry positive imagery, such as flowers, doves and hearts in soothing pastel colors. The experience has been described by participants as nothing short of “magical.” 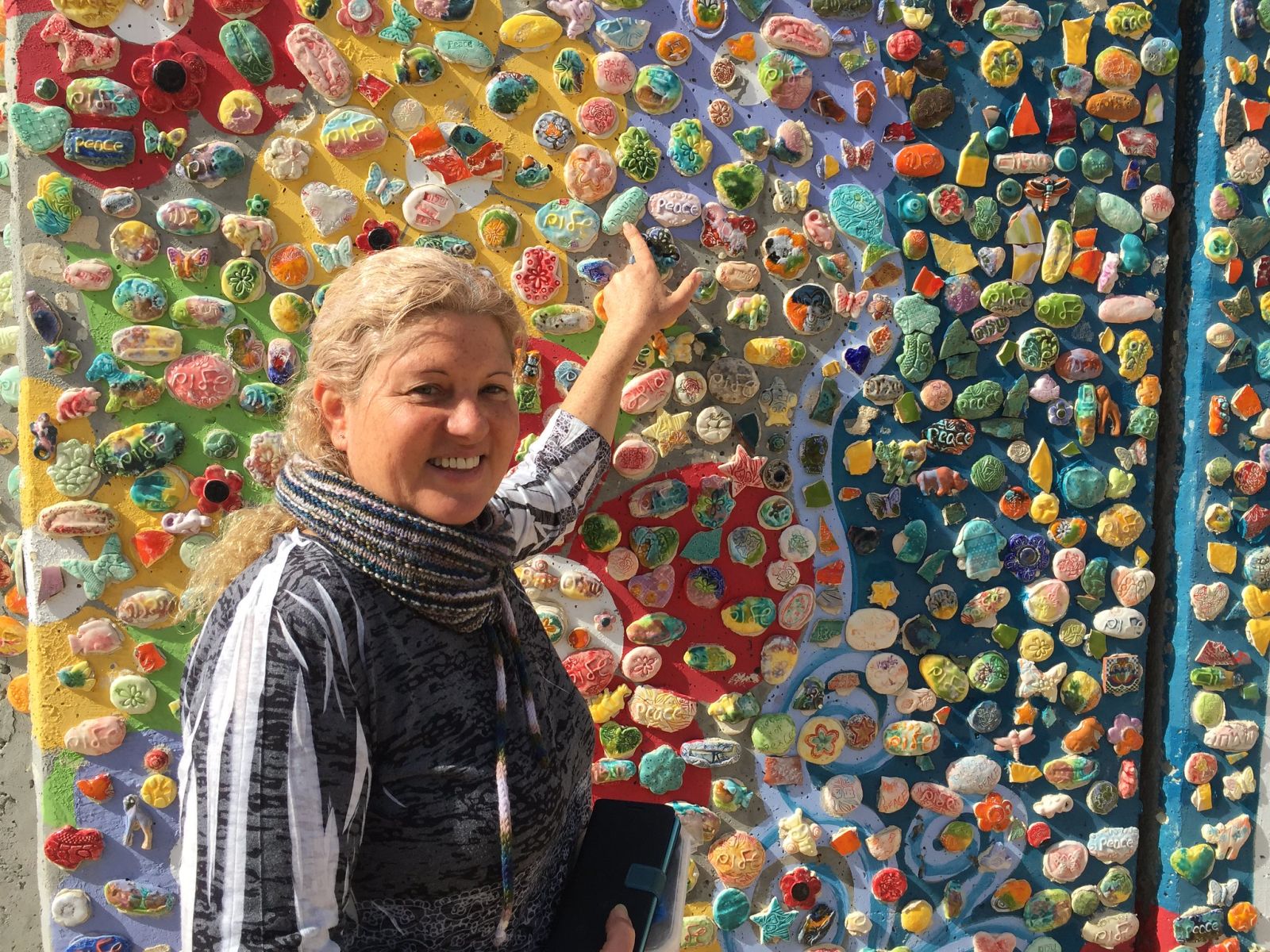 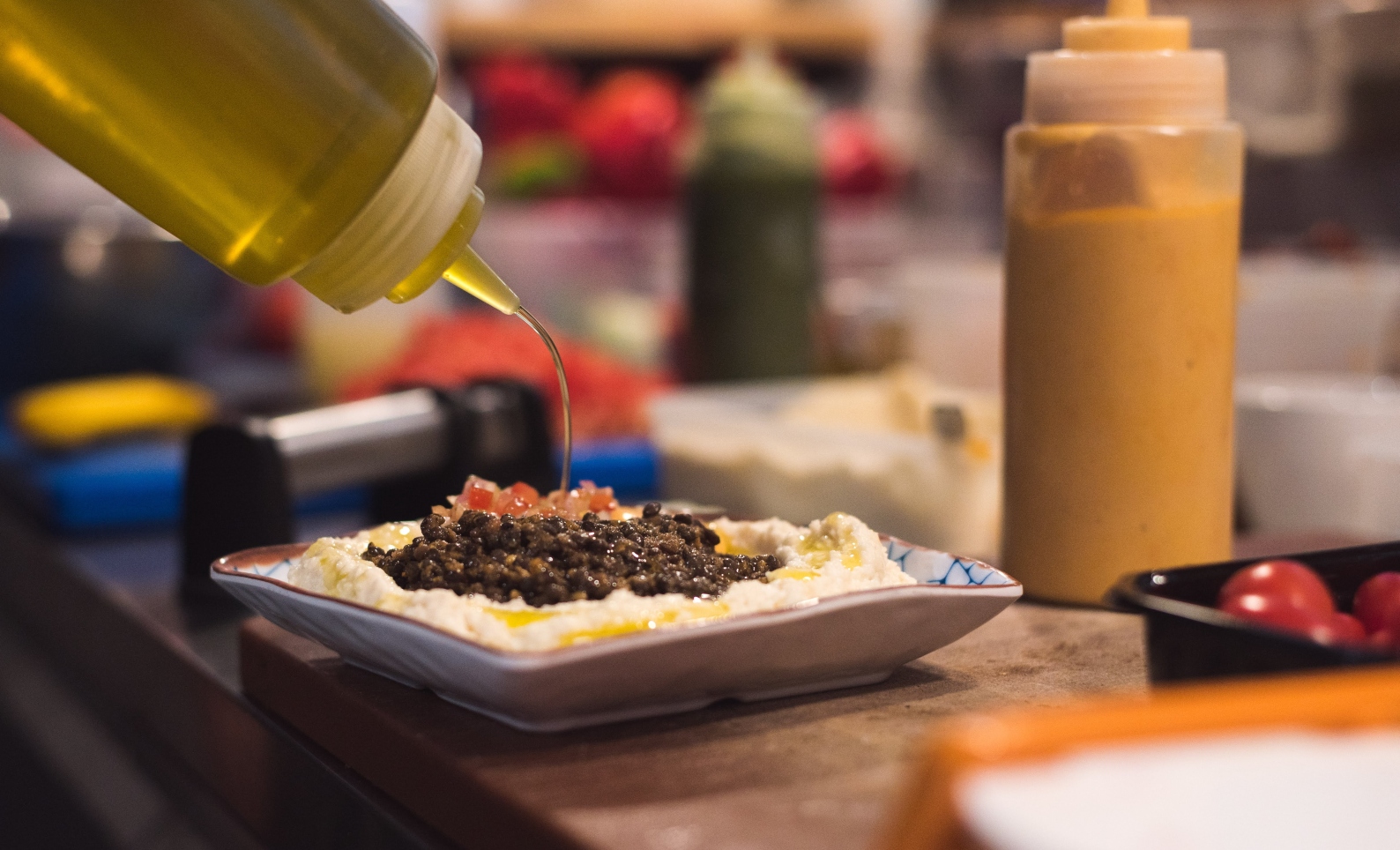 In Israel, you don’t have to go far to find good food, and the Gaza Envelope is just the same.

Rachela in Ofakim serves up Israeli-influenced takes on classic steakhouse dishes. You can get a great steak or extra-large burger served with foie gras or with tahini and roasted eggplant.

Hummus lovers will want to stop by HaHummus Shel Thina in its original Sderot location. Known for its creative takes on the genre, such as green masabcha, and creative nutritious toppings such as “Almighty Almonds” and pickled lemon, this is the local hummus shop that residents can’t stop bragging about.

5. Grab a drink, hear live music, and talk to some locals

When it comes to getting to know the locals, a little liquid courage couldn’t hurt. Sderot is known for its unique music scene (if you don’t believe me, check out the documentary “Rock in the Red Zone” on Netflix).

And as most cities’ music scenes are tied to the local pub scene, you can bet that this place has many a local watering hole where you can catch some live music and enjoy a cold beer. Pub Sderot is among the city’s most popular joints, featuring performances by Israeli bands, dance parties, other weekly festivities, as well as pub-style food and no-frills drinks.

Farther south in more remote Moshav Dekel sits Hanagaria (The Carpentry), a family-style desert café/bistro with a laid-back character by day and a pub vibe by night. Hanagaria was expanded from the owner’s actual carpentry workshop, where friends would come to hang out for extended coffee breaks.

Hosting free-entry local acoustic musical performances on Thursday evenings, it has become a place where locals flock to chill, watch the sun setting over the sandy desert, eat a comforting meal and drink, and just relax.

The tiny border town of Shlomit, established in 2011, hardly seems like a center for Jewish art, yet the community of only a few hundred residents boasts two places where you can purchase beautiful Judaica filled with special meaning. 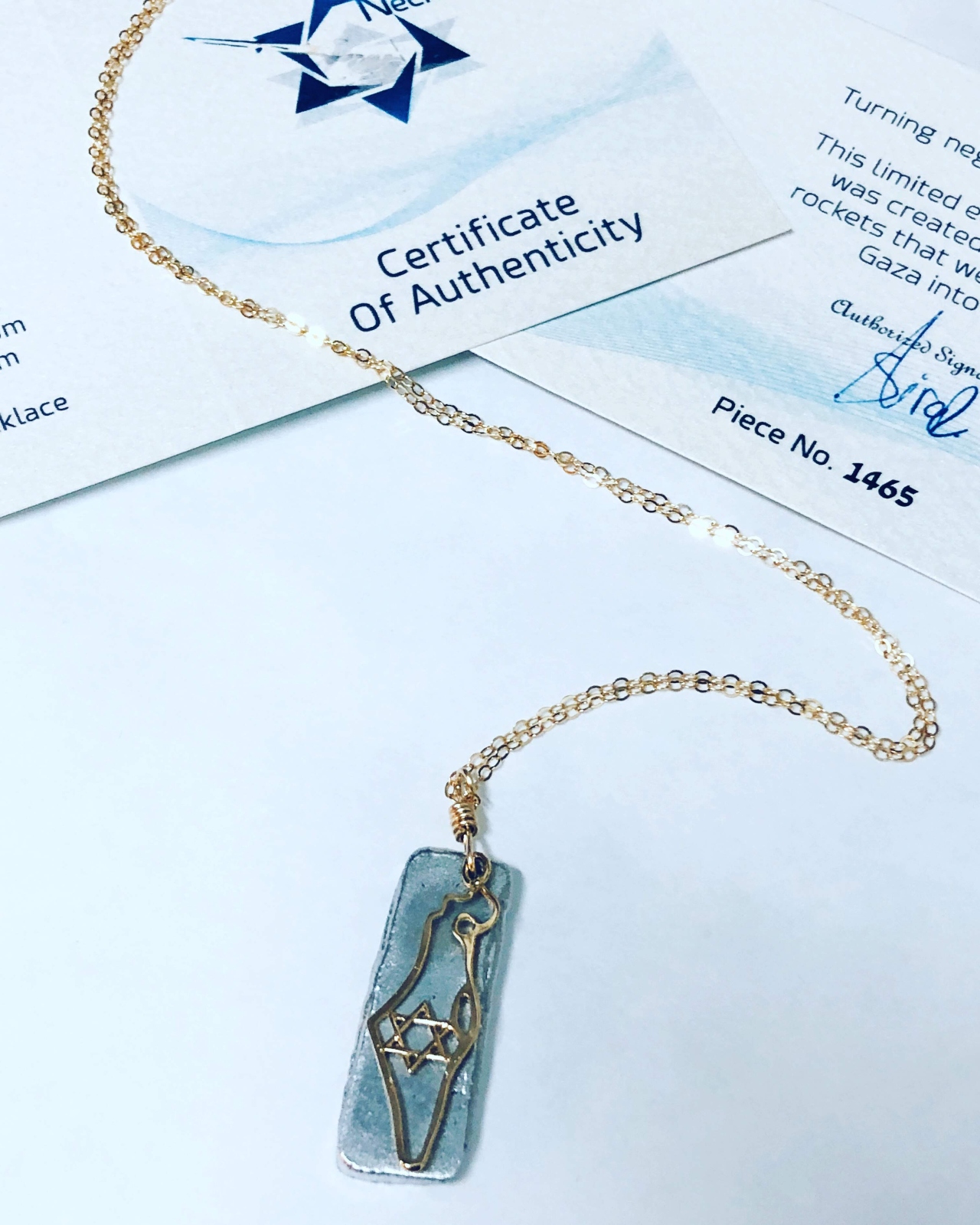 Collecting shrapnel from incoming Gaza rockets since Operation Protective Edge in 2014 and turning it into beautiful jewelry with a positive message, Yedidya and Shiran Harush of Shlomit are the creators of Rocket Necklace. The former Gush Katif (Gaza) residents, whose Sderot house sustained a direct hit this past May, are no strangers to the daily trauma of living under sudden bursts of rocket fire.

Serving as the JNF’s liaison for the pioneering communities on the Gaza border, Yedidya made sure that most of the proceeds made from the necklaces, bracelets and earrings, which carry Jewish and Zionist themes, go to the organization to be used in building bomb shelters all over the Gaza Envelope.

Another gifted artist in this tight-knit community is Elad Shai of Mezuzot Halutza(Pioneer Mezuzas). He is a Torah scribe and master calligrapher whose pieces include reasonably priced yet stunning mezuzahs, yarmulkes, tzitzit and prayer shawls. Shai’s works can be purchased from studio just 700 meters from the Gaza border, or from his site online.

Desert dairies may seem like a paradox but have been a natural part of settling the wild Negev desert landscape overtime through the establishment of kibbutzim and small family farms. The Gaza Envelope is no exception, being home to small boutique cheesemakers whose cheese may surprise you from the first bite.

Award-winning boutique cheese producers Beeri Dairy located in Kibbutz Beeri, use high-quality milk from a local farm to produce their hard and soft cheeses in the European style but given names that honor local elements of nature such as Rotem HaMidbar (Desert Juniper) and Kalanit (Anemone). Beeri products can be found in specialty shops throughout the country.

Another Gaza border-area family-run dairy is Tzeela in Ein Habesor. On a small sheep farm surrounded by pastoral fields, guests can sample cheeses, settle in for a kosher dairy meal or picnic basket, or even pet the animals and tour the farm for a small fee. Also drawing inspiration from this unique region, Tzeela’s Negev cheese –a hard sheep-milk cheese, aged for at least four months and cured with herbs such as rosemary, lavender, and English pepper — is not to be missed. 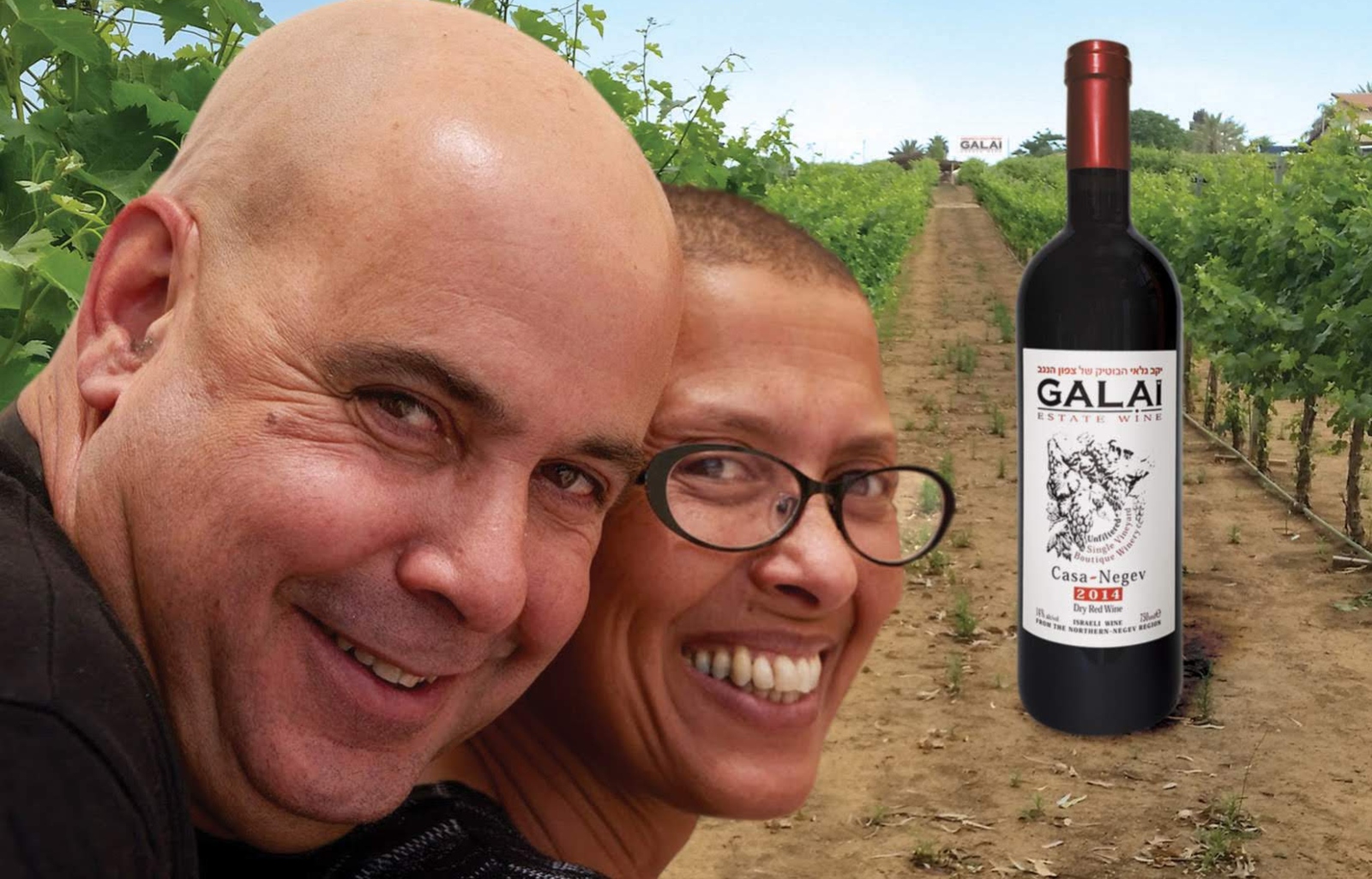 Assaf and Sigalit Galai in their vineyard. Photo: courtesy

This dry region has a surprising history of wine-making that dates to Nabatean times and has made a modern comeback in the last 20 years or so.

One such winery, a small family-operated estate vineyard named Galai Winery, a single vineyard boutique winery in Nir Akiva, serves guests tastings of newly pioneered wines. Established in 2002, the winery produces just a few thousand bottles each year, for which their boutique hands-on approach has already earned them international accolades.

For those who love both art and wine, an afternoon with Dan “Pepo” Marcipar of With Pepo in the Vineyard (Instagram Photo) will serve as your dose of creative inspiration for the day. 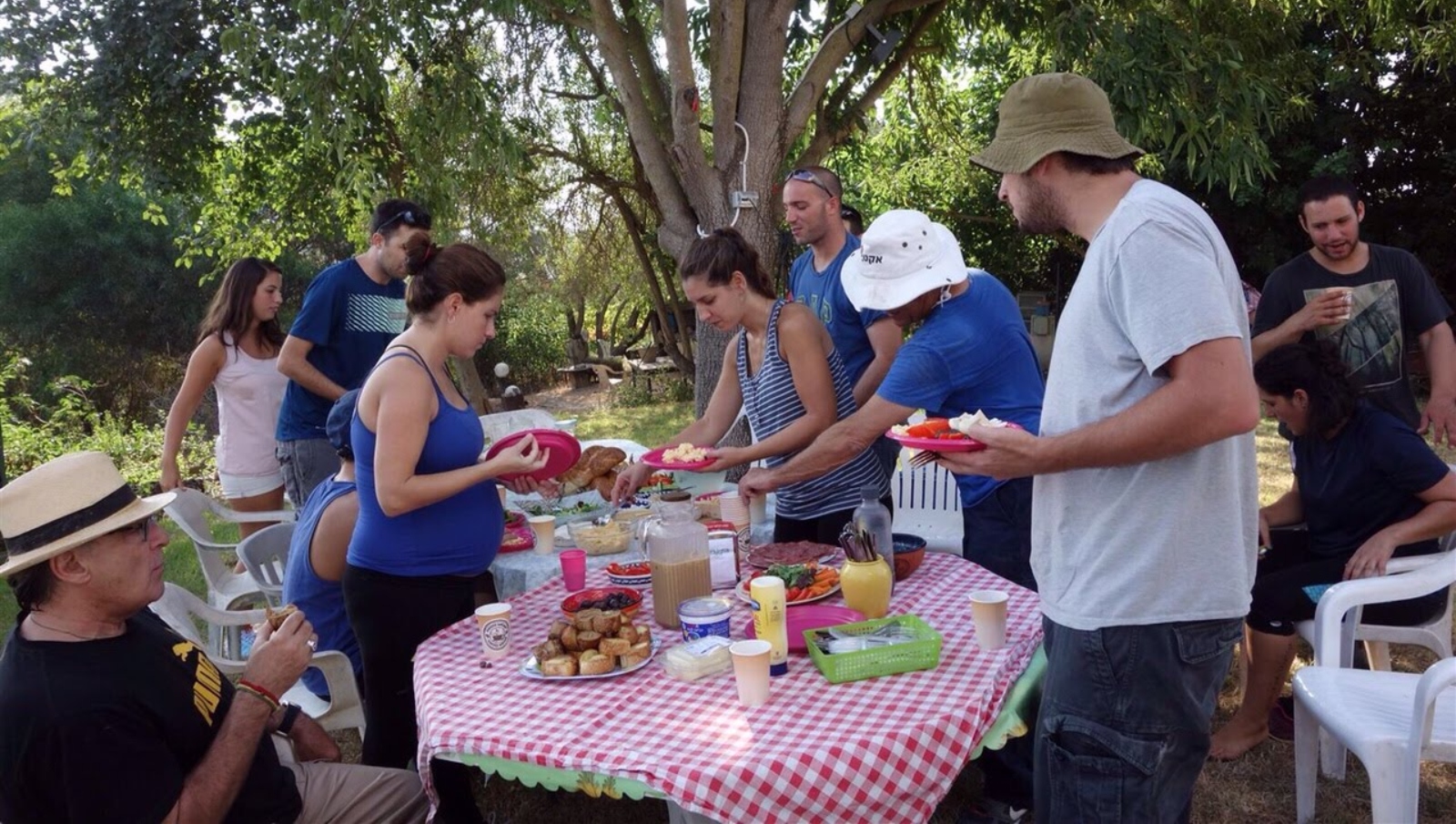 A family activity at With Pepo in the Vineyard. Photo: courtesy

A home-based winery and art gallery with an unobstructed pastoral view of Kibbutz Or Haner, Marcipar’s home becomes the native Argentinian’s platform through which he shares his creative processes and shows off his sculpting, painting, winemaking and schmoozing skills. Sitting on the porch to chat, taste wine, and enjoy the kibbutz lifestyle are highlights here. 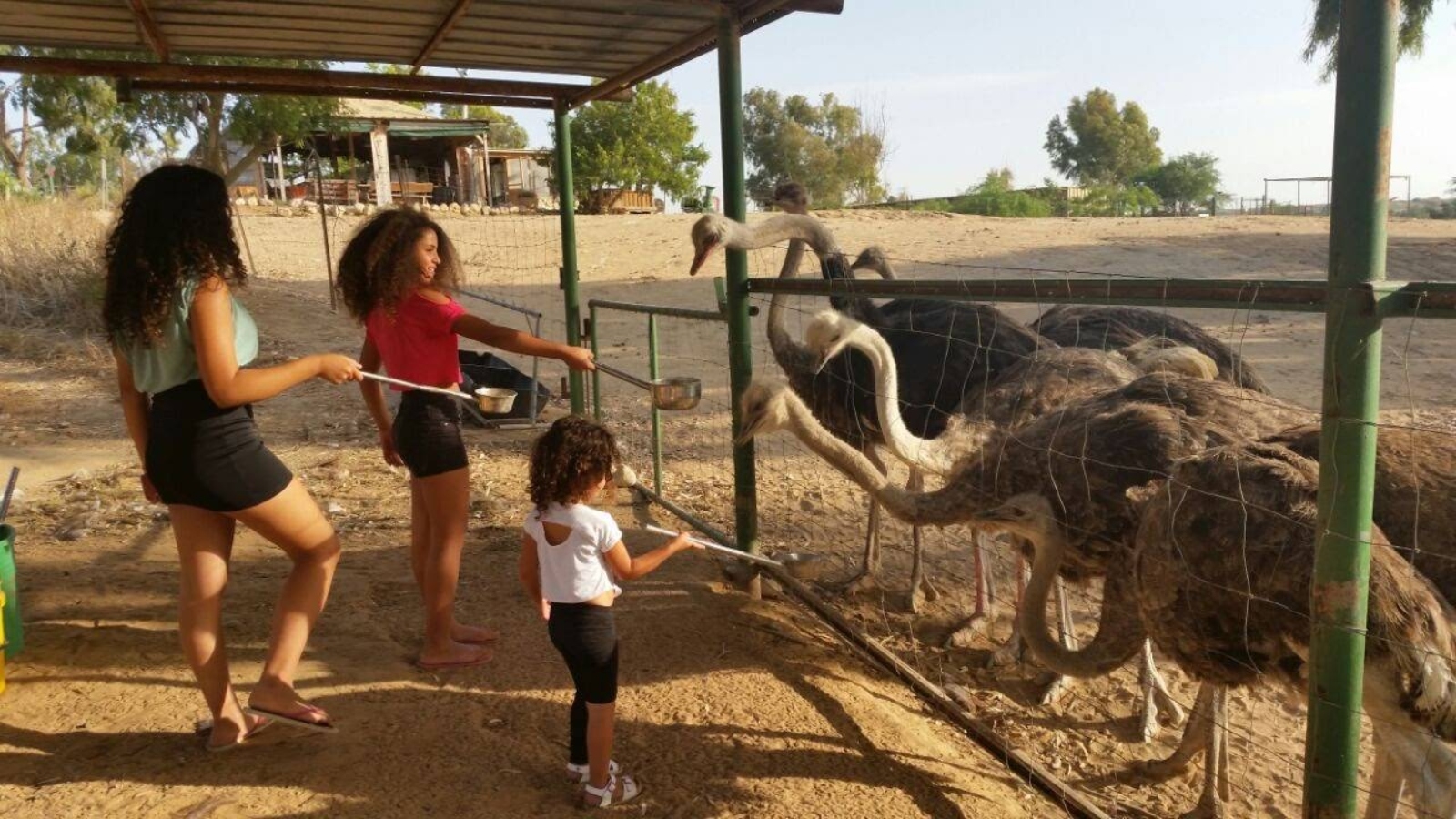 El HaYaen Ostrich Farm, situated outside Eshkol National Park, is a super fun stop, especially for families with small children who love a hands-on experience. Here you can wander the farm, feed the largest birds on the planet, make arts and craft from ostrich eggshells and feathers, and run into other animals such as geese, parrots and goats. Then wash up and enjoy lunch with a view of the desert landscape at the onsite coffee shop. (Note: the farm is closed during August.)

The ever-popular Salad Trail in the Besor region is managed by agronomist Uri Alon on Moshav Talmei Yosef. Live demonstrations by experts, activities for people of all ages, and most importantly tastings of produce straight off the vine, show the true meaning behind what it means to be an agricultural Zionist. 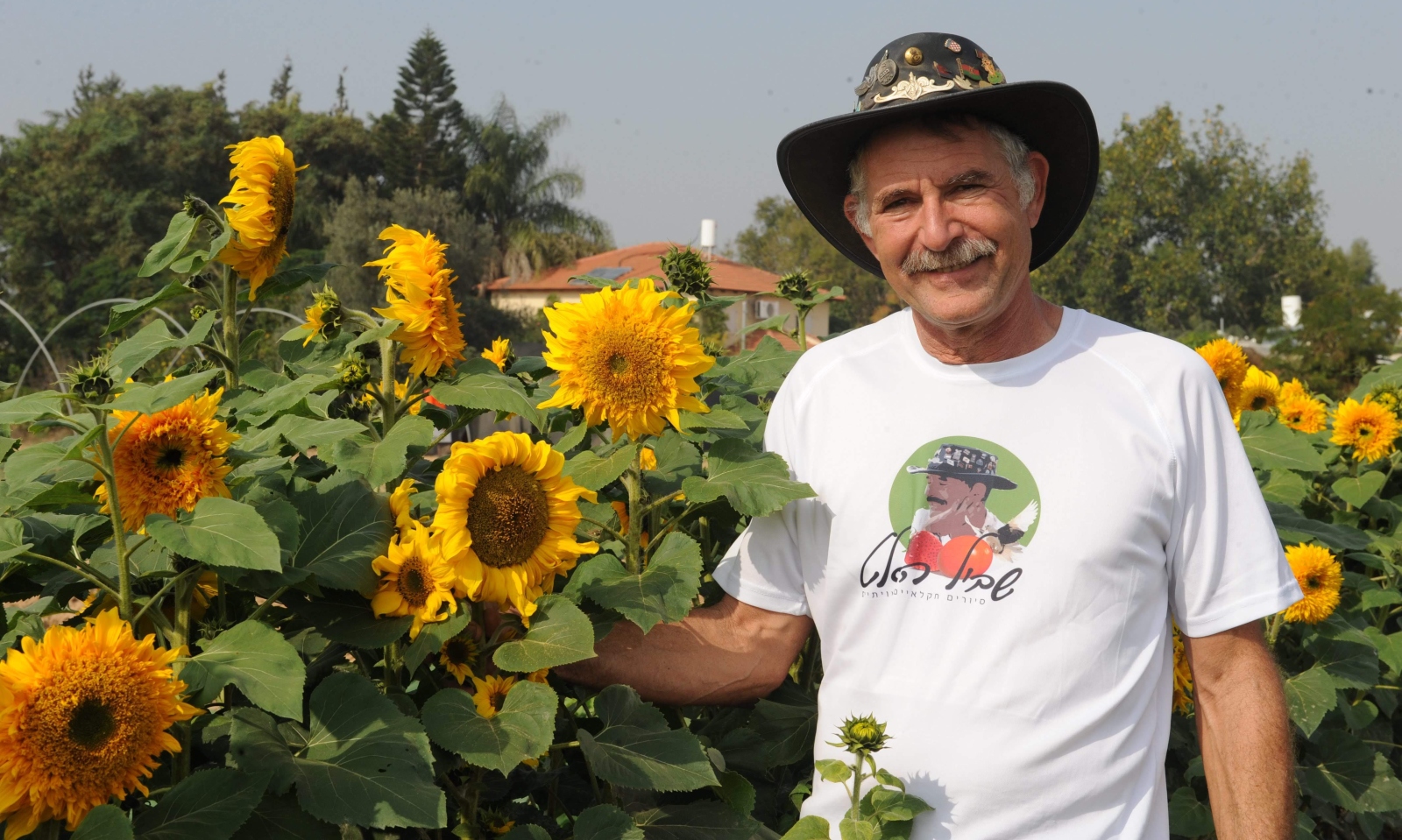 In February 2008, thousands of Israelis flocked to Sderot to do their Shabbat shopping as a sign of solidarity with the periphery town famous for taking the brunt of the aggression from Gaza. However, this idea doesn’t need to be done as an organized effort.

You can support Gaza Envelope Israeli towns any day of the year simply by stopping by to do a little shopping. Buy your snacks from any supermarket or mini mart in the area and show your support by helping to keep these communities going.