Photo of Nimrod Castle by Wirestock Creators via Shutterstock.com
#GrandScale

10 fabulous castles and fortresses in Israel

From palaces hanging off a cliff in the desert to knights’ halls and imposing fortresses, Israel is the place to imagine yourself in shining armor.

When you think of Israel, castles probably aren’t the first thing that comes to mind. Which is a shame, considering that the country boasts some truly magnificent ones.

Some of them date back thousands of years while others are more recent, but they are all monuments to fascinating history, lost empires and power struggles worthy of their own Netflix show.

Here, we’ve whittled them down to our top 10 castles and fortresses, to be admired while wearing your finest gown. 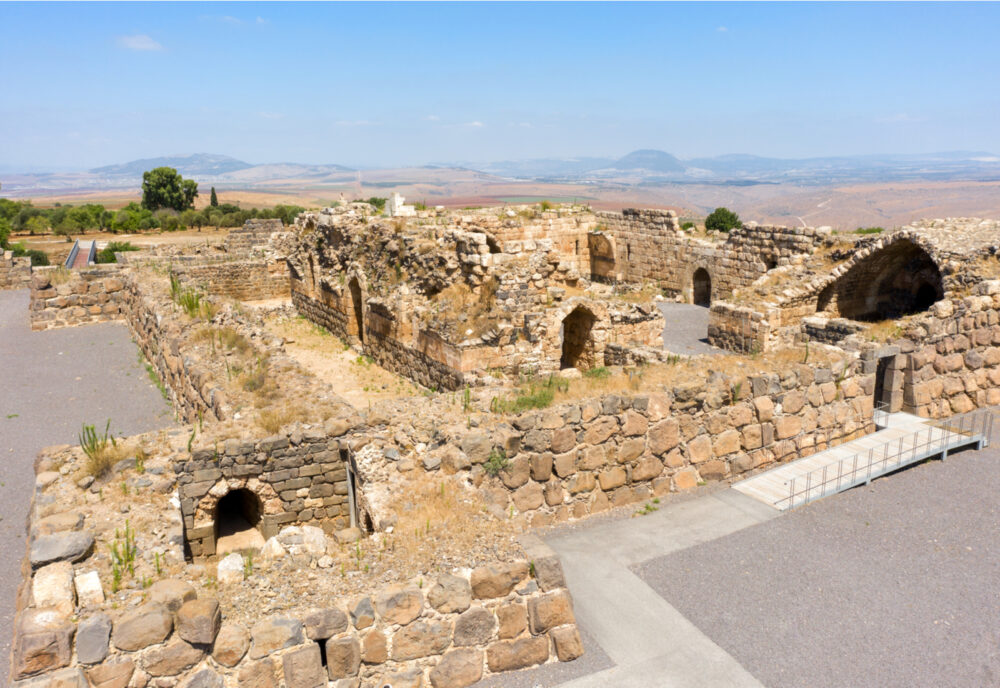 Photo of Belvoir Castle via Shutterstock.com

Like many of the castles and fortresses dotted throughout Israel, Chateau Belvoir was built by the Crusaders who ruled over the country, and later parts of it, from the 12th to 13th century. Located a short distance from the Sea of Galilee, the castle is concentric, meaning that it has two circuits of defensive walls one inside the other.

It was ruined by its Muslim conquerors in the early 13th century to ensure that Crusader forces won’t occupy it again in the future, but luckily they only destroyed the top floor and filled in the moat, leaving intact the base that can be viewed today. Nowadays, as part of a national park, the castle boasts not only great ruins but also a stunning panoramic view. 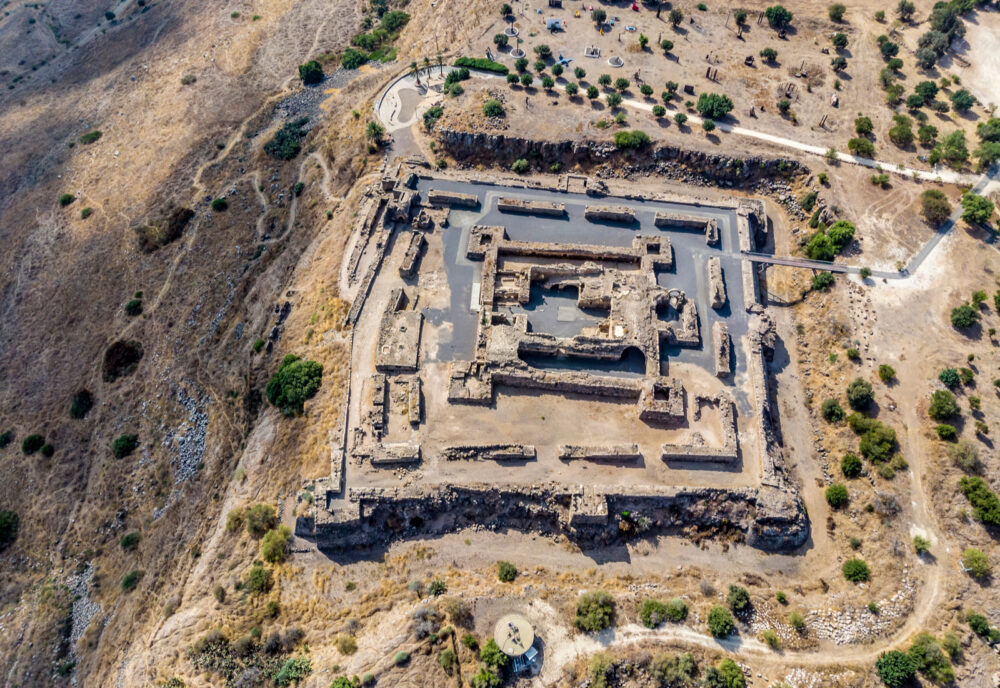 Photo of Belvoir Castle by Altosvic via Shutterstock.com 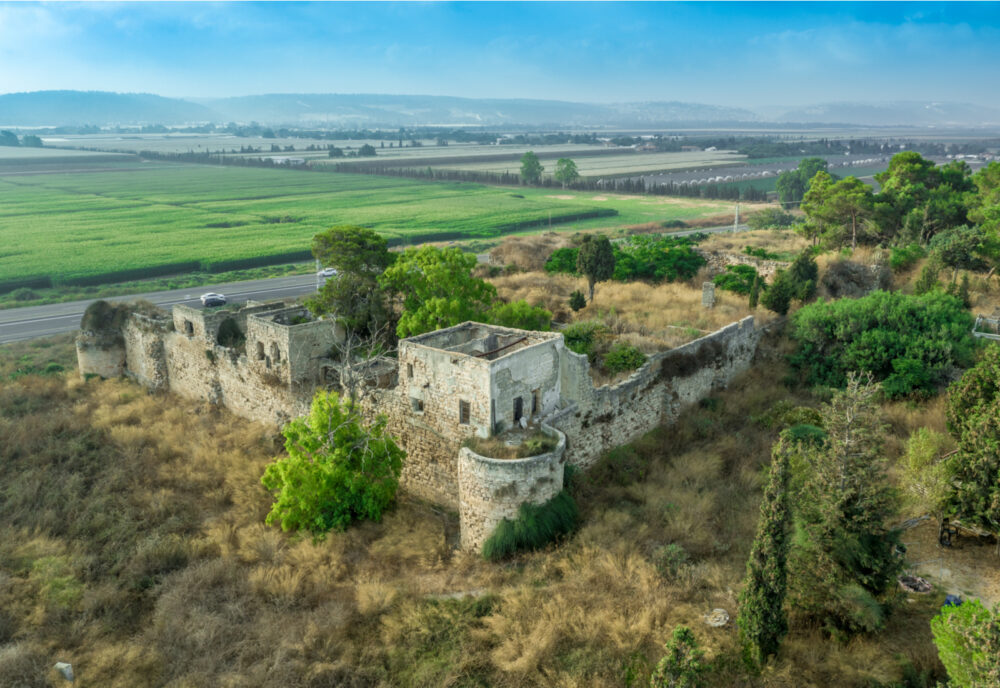 Photo of Cafarlet Castle by Tokar via Shutterstock.com

Cafarlet Castle, within the serene Moshav Habonim on Israel’s coastline, is rather mysterious in that there’s little historical record of it. It was probably built by the Muslim rulers of the Land of Israel in the eighth or ninth century, alongside similar fortifications constructed along the coastline to protect it from invading Byzantine Christians.

The rectangular castle had guard towers in each corner, which all underwent reconstructions when taken over by the Crusaders. Eventually the area was once again taken by Muslim conquerors, and the castle and surrounding area fell into disrepair. Today, the site remains off-road and is not maintained, so perhaps is best enjoyed from a distance. 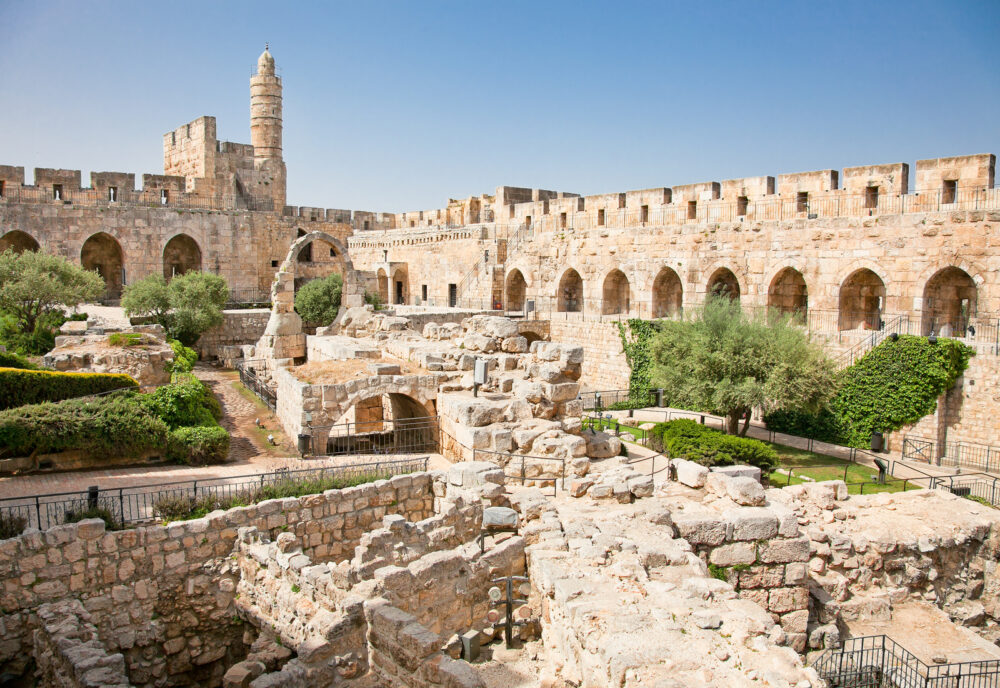 Photo of David’s Citadel by Aleksandar Todorovic via Shutterstock.com

One of Jerusalem’s most well-known landmarks, the David Citadel at the entrance to the Old City is a big, imposing complex that was originally the site of King Herod’s watchtowers some 2,000 years ago. It was then turned into a fortress by the Arab rulers of Jerusalem, further fortified by the Crusaders and then fortified yet again by the returning Arab rulers. The minaret that now adorns it was added by the Ottomans, who also surrounded it with a moat. Today, the citadel houses archaeological finds, the Tower of David Museum and a very impressive light-and-sound show.

Nimrod Castle on the slopes of Mount Hermon in northern Israel looks like it was taken straight from the set of “Game of Thrones,” being medieval and all. The huge complex was built by Muslim rulers on a strategic spot to protect the important road to Damascus.

It fell out of use hundreds of years ago but still very much crowned the local landscape, even leading a visiting Mark Twain to call it “the stateliest ruin of that kind on earth.” Today it is a national park that is open to the public, who can enjoy an ancient stone inscription, interesting architecture and magnificent views. 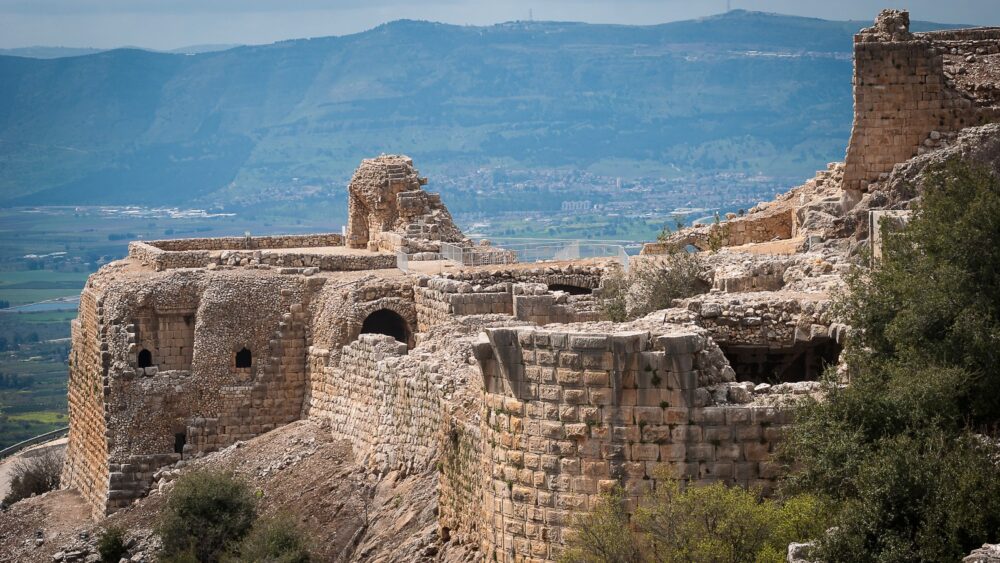 The ancient Nimrod Castle in Israel’s north is a stunning example of the country’s many castles and fortresses. Photo by Nina Mikryukova via Shutterstock.com 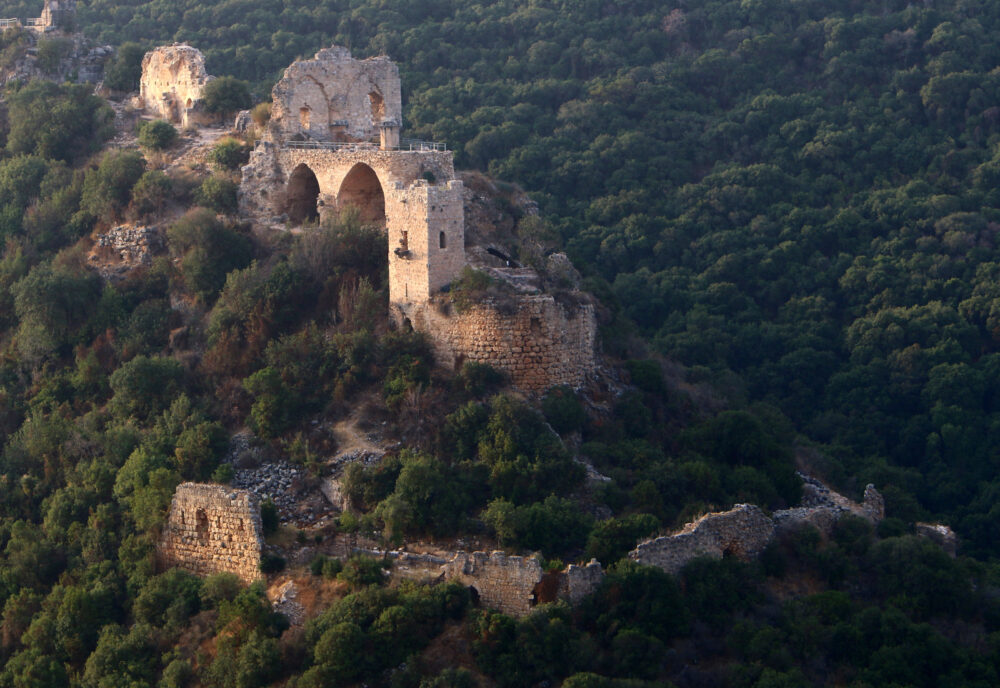 Photo of Montfort Castle by Shimon Bar via Shutterstock.com

Montfort Castle is a unique Crusader castle in that it was built not to protect the Christian kingdom from Arab invaders but rather to house some of the Teutonic Order’s administration and protect it from rival Crusaders. Built in the 13th century, it is located on a steep cliff in the northern Galilee, where it is surrounded by green forest. Today, it is part of a national park that is also home to rare and endangered plants. 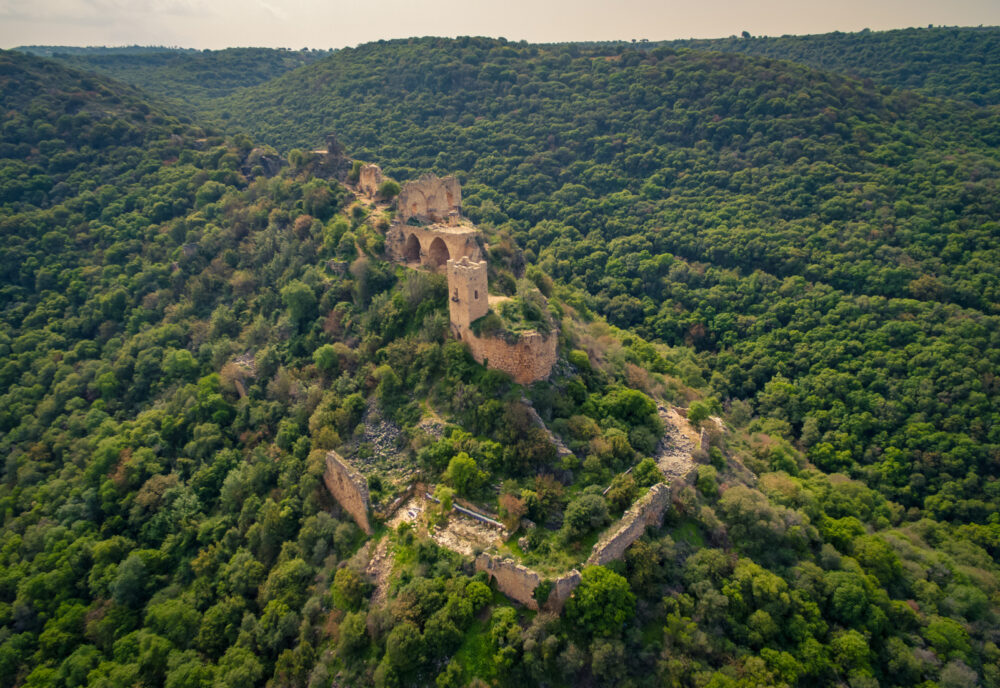 Photo of Montfort Castle by Seth Aronstam via Shutterstock.com 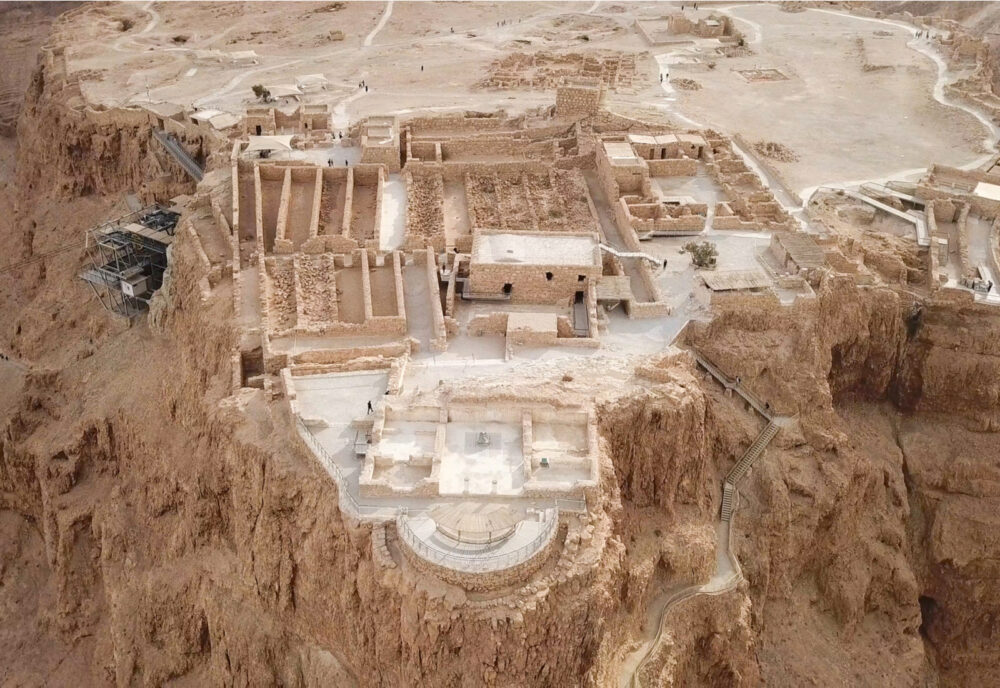 Photo of Masada by StockStudio Aerials via Shutterstock.com

Possibly the most jaw-dropping fortress on this list, Masada is one of Israel’s leading archeological sites. Perched atop a cliff in the Judean desert, this complex housed King Herod’s palaces and was where Jewish rebels fortified themselves again the Romans until, according to tradition, they killed themselves in 74 CE instead of falling captive.

Nowadays, Masada National Park is one of Israel’s most popular tourist sites, accessed by two walking trails or a less strenuous cable car. The best time to visit is sunrise, when the desert and the adjacent Dead Sea light up. 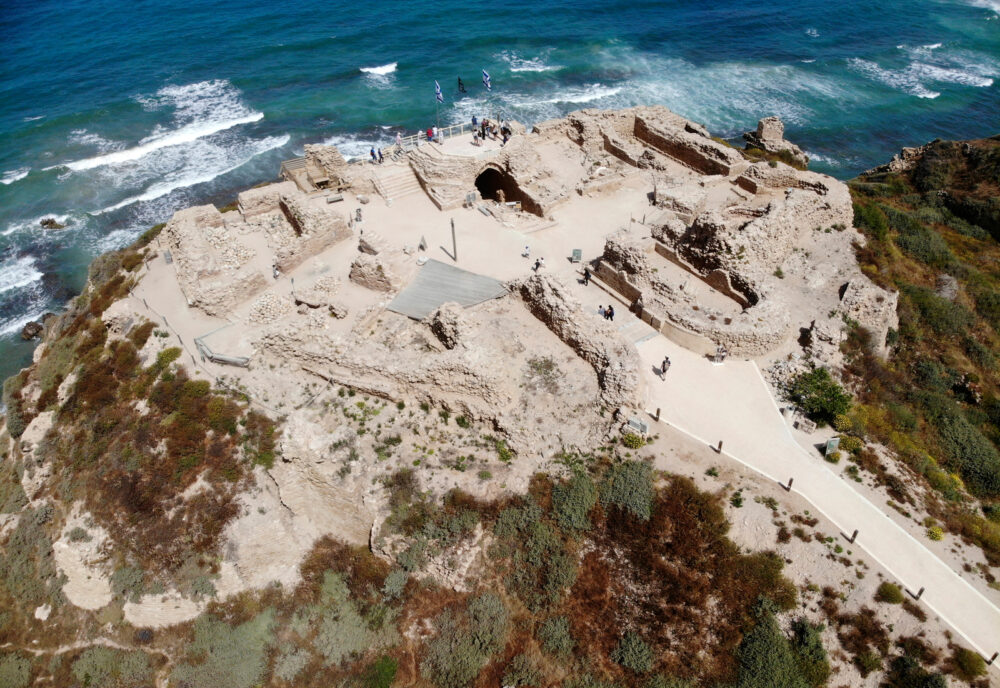 Photo of Apollonia by Yosefer via Shutterstock.com

Seaside Apollonia is one ancient town, established at the latest in the fourth century BCE. It was the home of Samaritans, Greeks, Romans, Muslims, Crusaders, Jewish immigrants and most recently well-to-do Israelis. The Crusaders left the most memorable mark on the place in the shape of a fortress that juts out to the sea. The fortress existed in its entirety for only 24 years before it was razed by Muslim conquerors. Nowadays, it’s a popular nature reserve that also includes a Roman villa, a moat and a mosque. 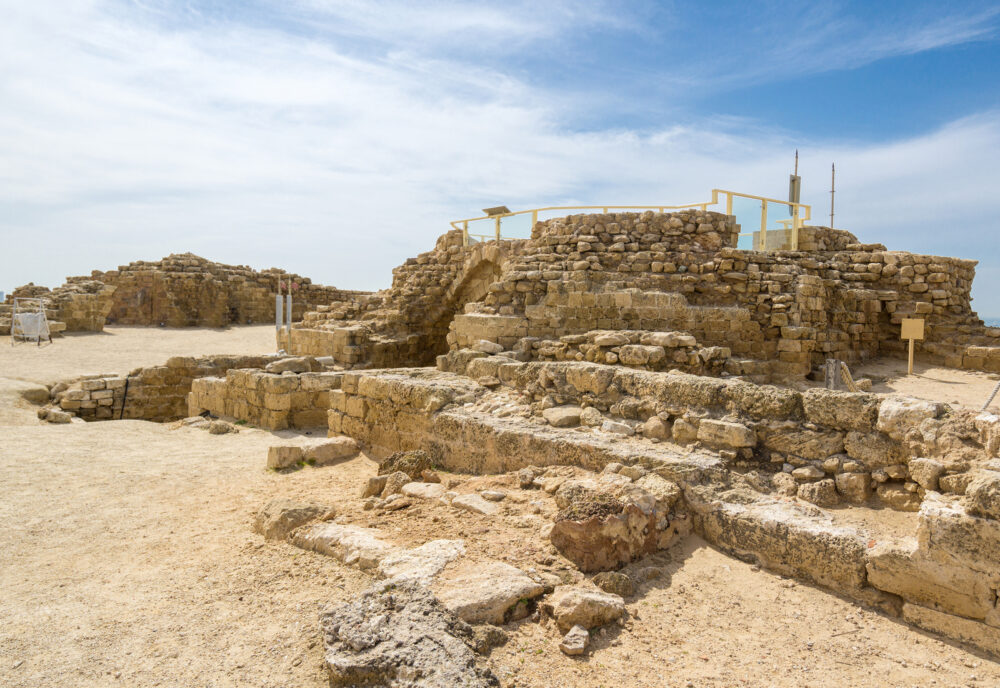 Photo of Apollonia by Alla Khananashvili via Shutterstock.com 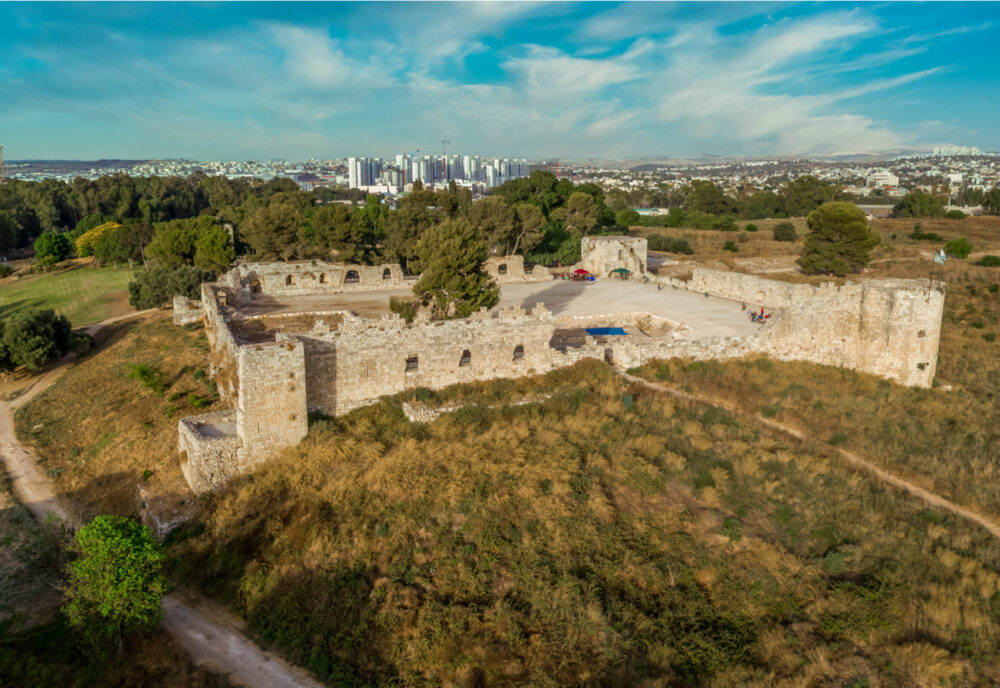 Photo of Antipatris Fort by Tokar via Shutterstock.com

Antipatris Fort is also known as Binar Bashi, a variation on the Turkish word for fountainhead. It was built in the late 16th century by the Ottoman rulers of the Land of Israel to guard the passageway between the sources – or fountainhead – of the Yarkon River and more distant areas and is located on the ancient Via Maris trade route linking Egypt and Syria. The impressive fort is now part of Tel Afek National Park, which boasts a lake and extensive recreational grounds. 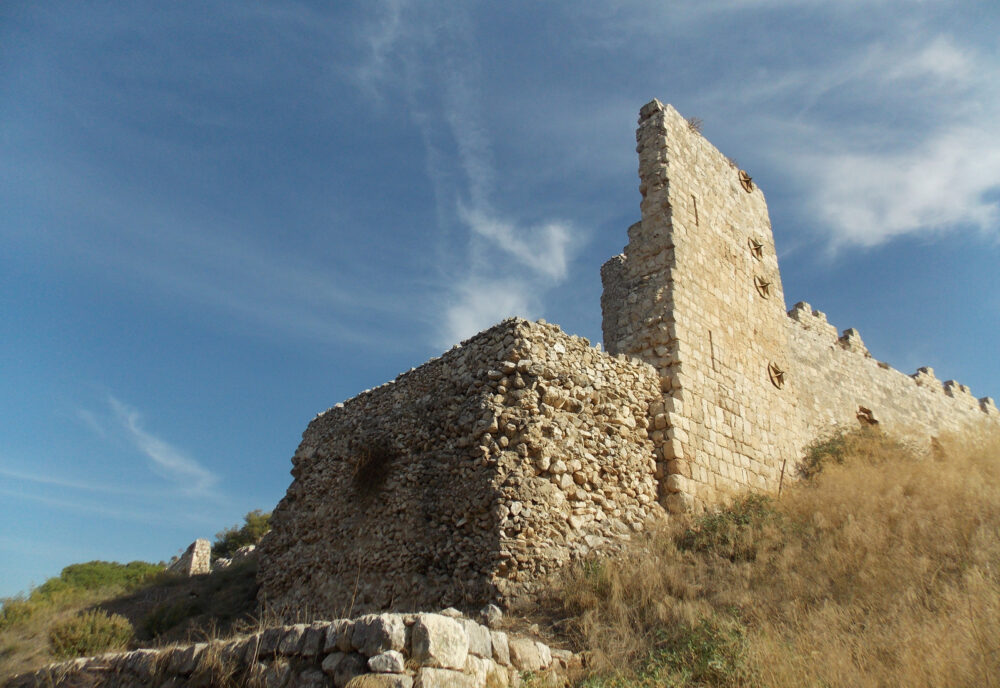 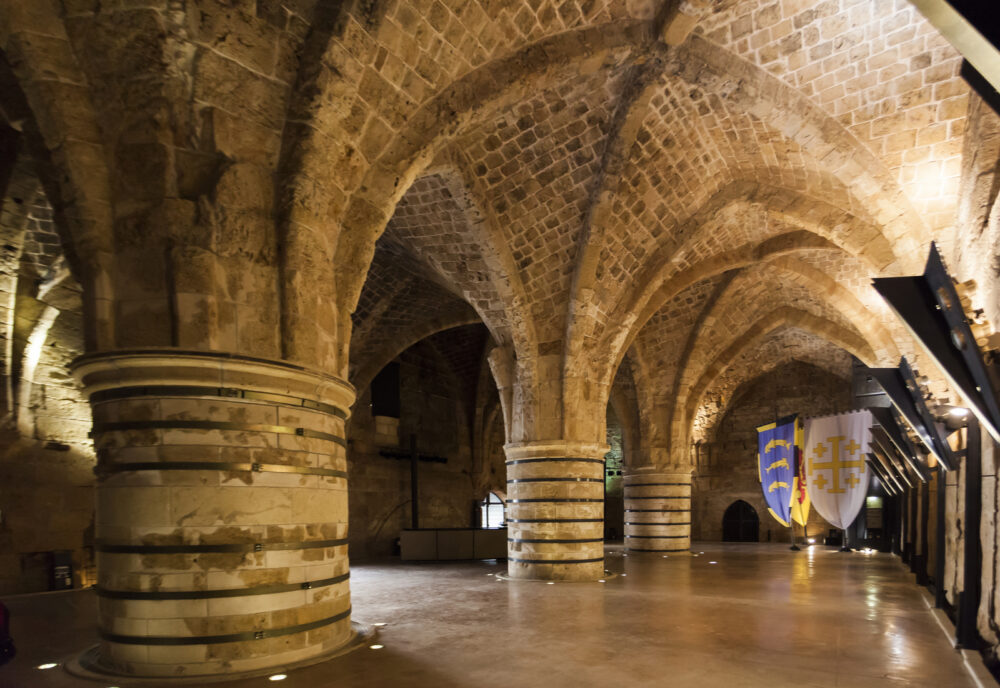 Photo of the Hospitaller Fortress by Ilia Torlin via Shutterstock.com

The crusading Hospitaller Order built the impressive fortress in Acre (Akko) in the 12th century when they and other Christian communities resided in the port city. The remains of their large-scale complex include a courtyard, what was a heavily secured gate and gate tower and the knights’ dining room – a huge, pillared stone room that you can just imagine teeming with knights in shining armor devouring their spit roasts. 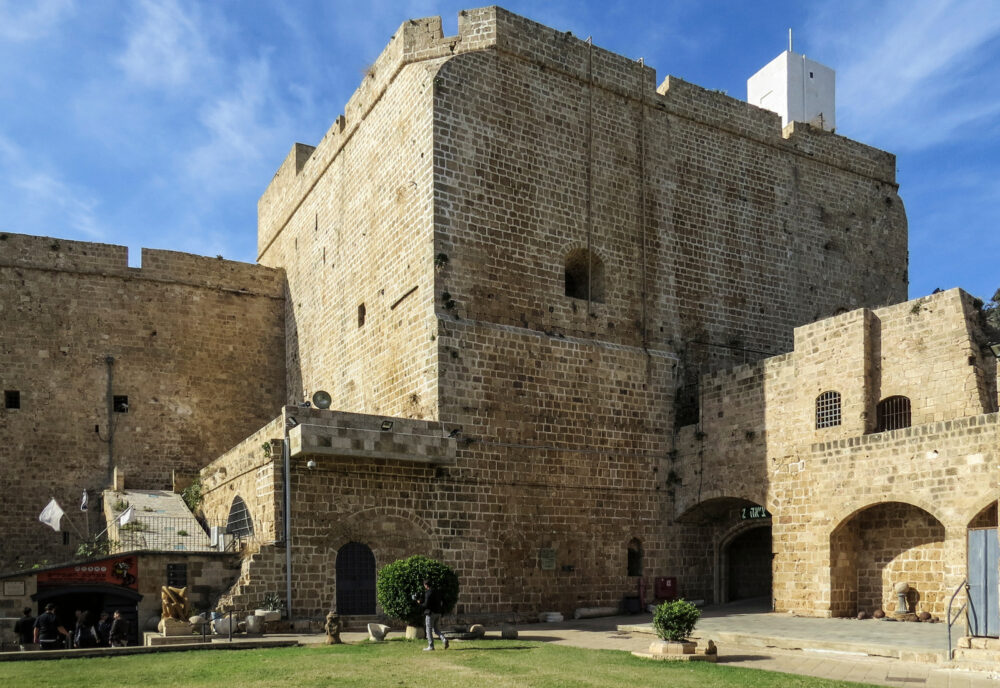 Photo of Acre Hospitaller Fortress by RICIfoto via Shutterstock.com 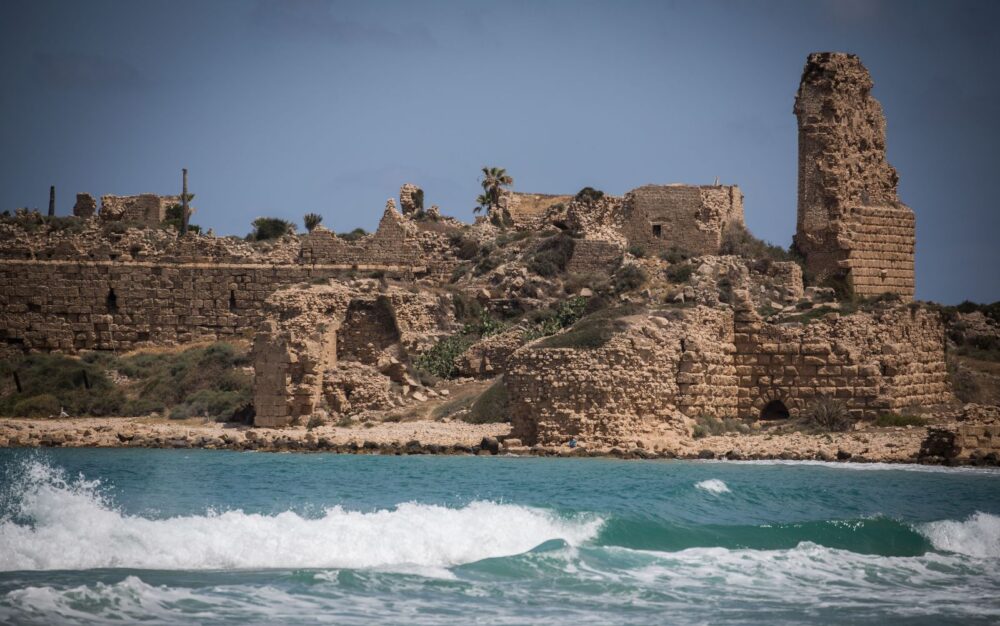 When the Crusaders built their fortress in Atlit back in the 13th century, little did they know it would one day become an Israeli Navy commando camp that would fascinate the public that is not allowed to step inside. Aside from being a huge and well-fortified fortress, the place was the last Crusader stronghold in the Land of Israel from which the last Christians knights departed back to Europe.

Years later, stones from the fortress were used to build new buildings in nearby cities and the whole site suffered damage from an earthquake in the 19th century. Still, it is an imposing sight, especially when you think of the secretive divers lurking underneath. 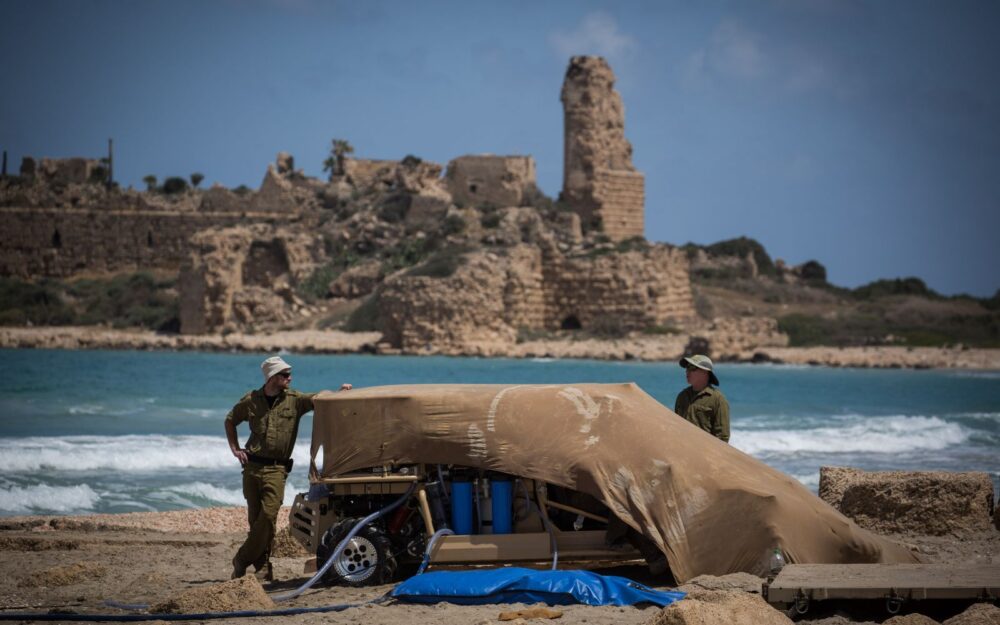