If you want to book a room at a five-star property, a luxury spa hotel, a wooden cabin, a boutique hotel on the beach, a youth hostel or a simple bed-and-breakfast, no problem. Israel has all of that and more.

But if you are seeking a really offbeat place to spend a night or two, check out ISRAEL21c’s list of 10 unusual places to stay in Israel. (Kudos to Judith Isaacson of Custom Israel Tours for helping us choose.) 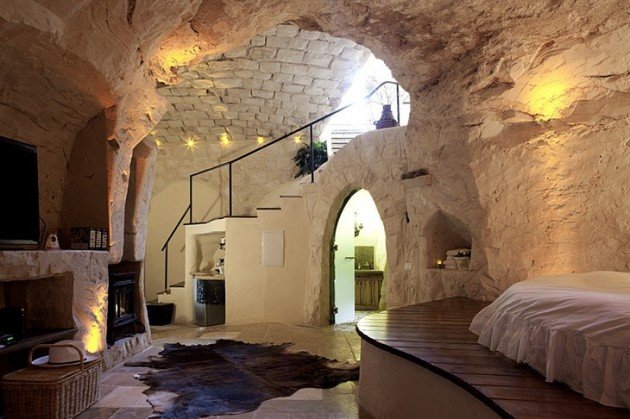 The Zimmerbus bed-and-breakfast was created by an Israeli couple in the Negev hilltop village of Ezuz, using discarded buses. Zimmerbus offers three converted, air-conditioned vehicles (one for couples, two for families) covered with natural adobe and date-palm leaves. A recycling system using wastewater from the Zimmerbuses irrigates an organic orchard, and there’s a chlorine-free swimming pool. Information: 972-55-667-7962; thewellbnb@gmail.com.

The couple also recently opened Home in the Old City, four guesthouses inside two restored century-old stone buildings that were once staff homes of Hadassah, the first hospital in Beersheva. 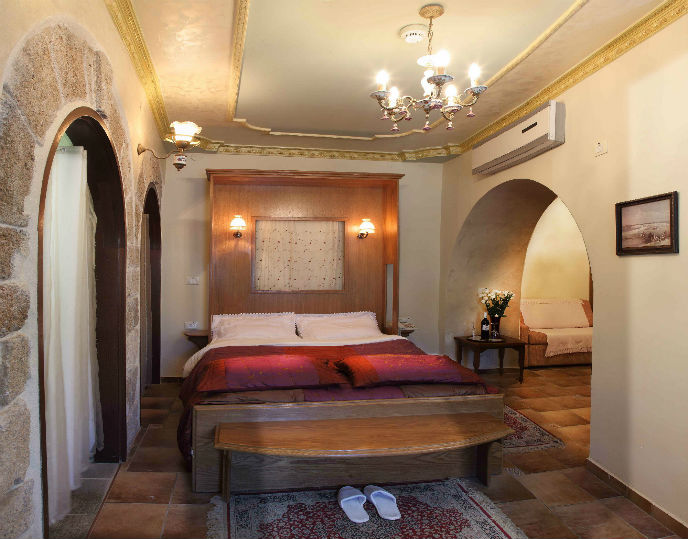 A room in the Akkotel.

Akkotel is built into the walls of the Old City of Acre (Acco). The renovated historical building originally was constructed by the Ottoman Turks (who ruled Palestine in the 16th to early 19th century) to billet army officers, and later became a boys school and then a courthouse under the British Mandate. Sixteen one-of-a-kind rooms combine stoned arches with handmade furniture. Information: +972-4-987-7100; info@akkotel.com.

Another historic option in Acre is Efendi, combining two Ottoman mansions meticulously reconstructed under the supervision of the Antiquities Authority and merged into one building as a boutique hotel. Artisans were flown in from Italy to restore the hand-painted ceilings and a fresco of the city of Istanbul created in 1878 in honor of the new Orient Express train station.

The Alegra Boutique Hotel in Jerusalem’s Ein Karem neighborhood consists of several buildings including an authentic Crusader inn that among the oldest structures in the historic neighborhood. Each of the four floors has its own luxury suite built from the remains of different eras; the oldest floor is 800 years old and the newest 200 years old. Information: +972-650-0506

Kfar Hanokdim between Masada and Arad offers a range of desert accommodations: A goat’s-hair Bedouin tent, 35 desert-style, air-conditioned guest rooms furnished with local wood, metal, stone and salt from around the Dead Sea; and designed lodges (sukkot) made with thick woolen sides and doors with decked wooden floors and futon-style beds for up to eight occupants. Information: 972-8-995-0097; kfar@khn.co.il. 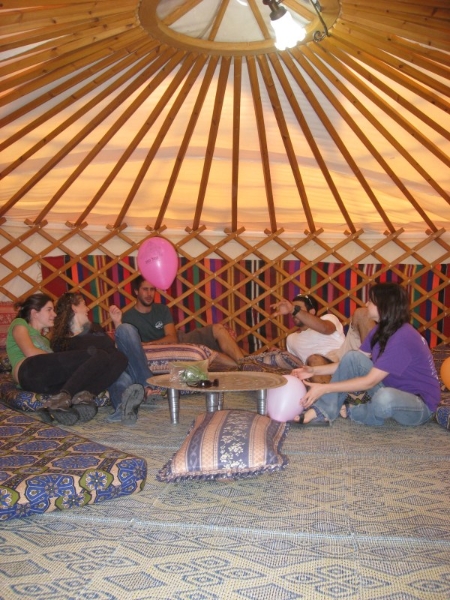 Hanging in the Khan.

Ghengis Khan in the Golan, east of the Sea of Galilee, contains five air-conditioned yurts with attached private bathrooms. Four of them hold up to 10 people each, and one up to six. There is a communal kitchen with equipment for guests to use. Information: 972-52-371-5687.

Indian Village at Moshav Avnei Eitan in the Galilee  is an upscale yurt campsite (think Jacuzzis) that also offers wooden cabins if a tent isn’t your thing. Information: 972-4-676-2151; info@tipi.co.il

7. Dancing in the desert

8. A night at the cinema

Lobby of the Cinema Hotel

Tel Aviv’s downtown Cinema Hotel  is an 83-room boutique hotel in an original Bauhaus building that once housed the Esther Cinema. The hotel’s unique design is complemented by some of the original projectors and movie posters. Classic movies are screened in the hotel lobby — with popcorn, of course — to heighten the nostalgic atmosphere. Information: 972-3-542-5555.

9. Playing in the mud 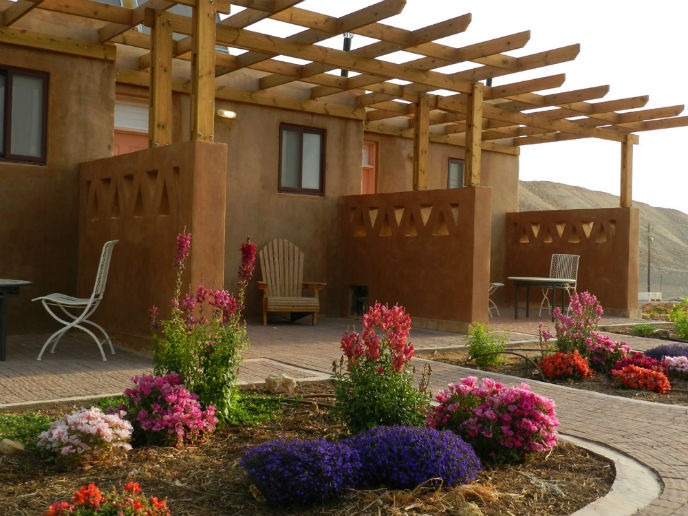 10. Sleep in an art gallery 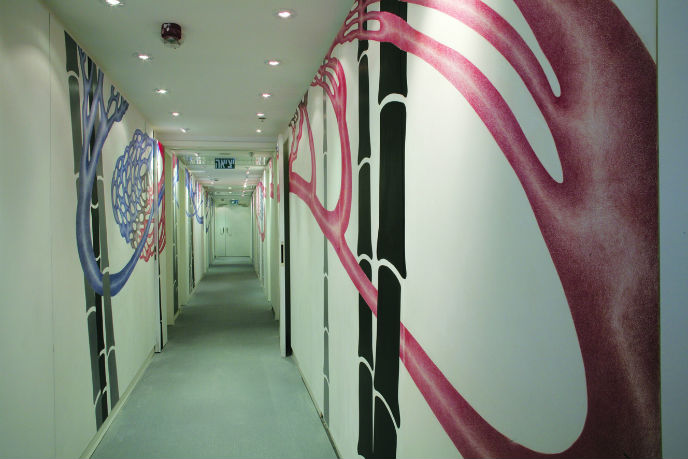 A corridor in the Artplus hotel.

The Artplus  boutique hotel in Tel Aviv boasts 62 rooms dedicated to rotating exhibitions of Israeli art. Five prominent Israeli artists created the murals that set the tone on each floor, and the foyer and lobby feature works by internationally renowned artists Zadok Ben-David and Sigalit Landau. A library has art books and magazines for guests to peruse. Information: 972-3-542-5555.

The Art Gallery Hotel in Haifa  was opened in 2010 in a refurbished Bauhaus-style hotel from the 1930s where statesmen such as David Ben-Gurion and Yigal Allon slept over. Nine exhibitions of Israeli art are installed throughout its floors and hallways, along with open displays. On Saturdays, guests can take a free guided walking tour of Haifa art and architecture. Information: 972-4-861-6161; gallery@hotelgallery.co.il

The newest entry in this category is the Elma Arts Complex & Luxury Hotel in Zichron Ya’akov. Two expansive galleries accommodate paintings and sculptures by artists from Israel and all over the world. Four studios offer artists the opportunity to work in residency at the hotel and give master classes; and two full-size concert halls are available for the performing arts. Artworks are scattered about the hotel itself, which boasts spectacular views of the Mediterranean from guest rooms in its main building and private two-floor “cottages.” 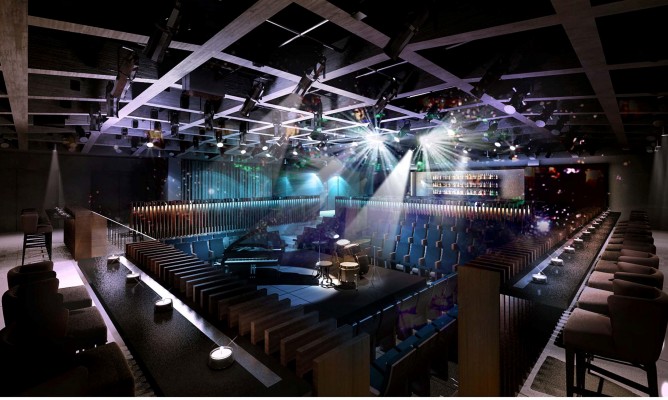 The Cube, one of the Elma’s concert halls. Photo: courtesy